The wife of a rugby star Kylie Leuluai has escaped a speeding ban after claiming her husband would have to quit his club to do the school run if she could not drive.

Lebron Leuluai, 41, faced disqualification from driving after she was caught driving at 48mph in a 40mph zone in her luxury Jaguar.

But the mother-of-three said such a ban would force her husband, who is currently head of operations at rugby league outfit Warrington Wolves, to lose his post.

Mrs Leulauai, a trainee primary school teacher, said she feared her son might get lost if he was made to get public transport to practice as routes were ‘always changing’.

She said the couple’s ‘amazing’ son, 12, has a football scholarship with Manchester City and is required to attend matches across the country during the weekend.

Mrs Leulauai, who lives with her husband and children in a £1,900-a-month rented home in Wilmslow, Cheshire, admitted speeding at a court hearing on Wednesday.

But she wept as she asked to be spared a ban, telling Manchester Magistrates’ Court that she would suffer ‘exceptional hardship’.

JPs agreed and allowed her to carry on driving, even though she now has 12 points on her licence.

The court heard Mrs Leuluai was caught speeding on January 7 while driving her Jaguar XF along a dual carriageway in Oldham.

She had three previous speeding offences on her record from June 2015, December 2016 and August 2017, racking up nine points on her license.

But Mrs Leuluai, whose Samoan husband, 40, played for Leeds Rhinos as prop forward for ten years, said she needed to drive in order to maintain his job security.

Appearing unrepresented, Mrs Leuluai said: ‘My husband’s job is on a temporary contract and he could lose his job if he couldn’t fulfil what they need him to do. 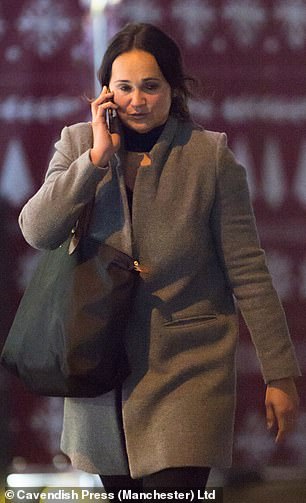 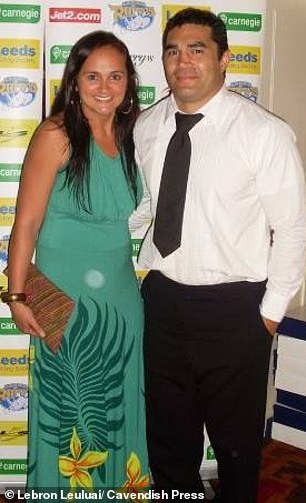 The mother-of-three said such a ban would force her husband Kylie (shown right), who is currently head of operations at rugby league outfit Warrington Wolves, to lose his post

‘He works lots of evenings and weekends and whenever they need him to, it’s not a nine to five job. It would complicate my husbands job if I lose my license.

‘It would affect us financially. We have recently moved from Leeds and we have been living here for two to three months. We are finally trying to get back on our feet.

‘If he was to lose his job, there would be a loss of income. We do not have savings, we are using our own money to pay rent.

‘ If there is a loss of income there will be a loss of accommodation. None of our family live in the UK so we would struggle getting help to look after the children.

Drivers in the UK face a ban from the roads if they rack up 12 points within a three-year period under ‘totting-up’ laws.

Such drivers face a ban of up to six months, unless they can convince a court that such a disqualification would result in ‘exceptional hardship’.

Magistrates are required to judge if the ban would have significant effect on ‘innocent’ parties, such as family members who rely on that person for school runs or hospital appointments.

The exceptional hardship mitigation can only be used once every three years.

I’ll be working one-on-one with a young girl. It’s at a school in Wilmslow and I started yesterday so I’m still having my training.

JP Ian Scott-Dunn told her: ‘We have listened to what you have said, and that which you have said so eloquently.

‘It’s always nerve wrecking coming to court and standing up in front of us, especially for someone who doesn’t come in very often.

‘We have decided that is specifically due to the impact on your son’s opportunities.

‘If you were to lose your license we recognise your husband who wouldn’t be able to take over as he could lose his job.

‘The vast majority of people who try to use exceptional hardship get their application rejected.

‘You have been lucky today, but we believe your children would suffer exceptional hardship if you lose your license today.

‘We are giving you three points for the speeding offence in January this year, that makes 12 points in total – but we are not taking your license away.

Her husband was a key figure in Leeds Rhinos success during his nine seasons at the club, winning a total of six Grand Finals.