Kylie Minogue cut a solemn tone as she spoke of her ‘love’ for Michael Gudinski at his state funeral on Wednesday night.

The pop superstar was introduced as the ‘First Lady of Mushroom’ by the music king’s son and business partner, Matt.

Wearing a stylish black blazer, the Melbourne native said: ‘I have wrestled with what to say.’

Legend: Pop princess Kylie Minogue cut a solemn figure as she spoke of her ‘love’ for Michael Gudinski – before taking to the stage with Ed Sheeran to duet ‘All the Lovers’

She continued: ‘Sue [Michael’s wife] and and all the family, and my family, we are moved to be here with you.’

Kylie went on to refer to Michael as ‘the big G’ as she discussed their special relationship together.

‘So Michael, ‘The Big G’, took this little scrawny girl from Melbourne to the world and back home again,’ he said. 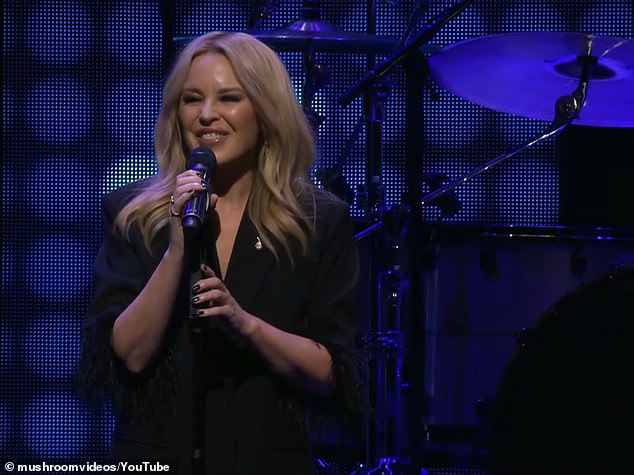 Special relationship: ‘He made me feel like I was at least five foot, five,’ she said, joking about his endless belief in her

A composed Kylie went on to say she echoed all of the kind sentiments that were made about the music king pin.

‘ I echo the sentiments of everything that has been said tonight. But especially how he believed in you when you couldn’t yourself.’

Kylie, who is one of the country’s most successful musicians, said Michael had recently flown to Glastonbury while she was performing.

‘He was so proud. I was so so glad he could be there with me,’ she said.

Kylie went on to do a duet with Ed Sherran with the pair singing Kylie’s hits ‘All The Lovers’ and ‘Locomotion’.

The pop princess broke her composure to before starting Locomotion, remembering where it all began with her and Michael.

‘We love you Gudinski,’ Kylie said.

‘There will only ever be one. You have our hearts forever.’