She’s just recovered from her ‘scary’ battle with Covid.

So Kym Marsh ensured she let her hair down with her Strictly Come Dancing stars at their Christmas party in London on Thursday.

The 46-year-old actress seemed in high spirits as she enjoyed a glass of red wine after returning to their hotel to keep boozing with Helen Skelton and Fleur East after spending a week in isolation.

Strictly Come Drinking! Bleary-eyed Kym Marsh planted a kiss on Helen Skelton after her ‘scary’ Covid battle at their boozy Christmas party in London on Thursday

Kym was in an affectionate mood at the party, wrapping her arms around Helen and planting a kiss on her cheek.

After changing out of their glamorous partywear, the team were casually clad, with Kym donning a black hoodie bearing white lightening bolts.

Helen – who recently sold the gifts given to her at her wedding to ex Richie Myler –  donned a black crop top that she paired with tiger print jogging bottoms. 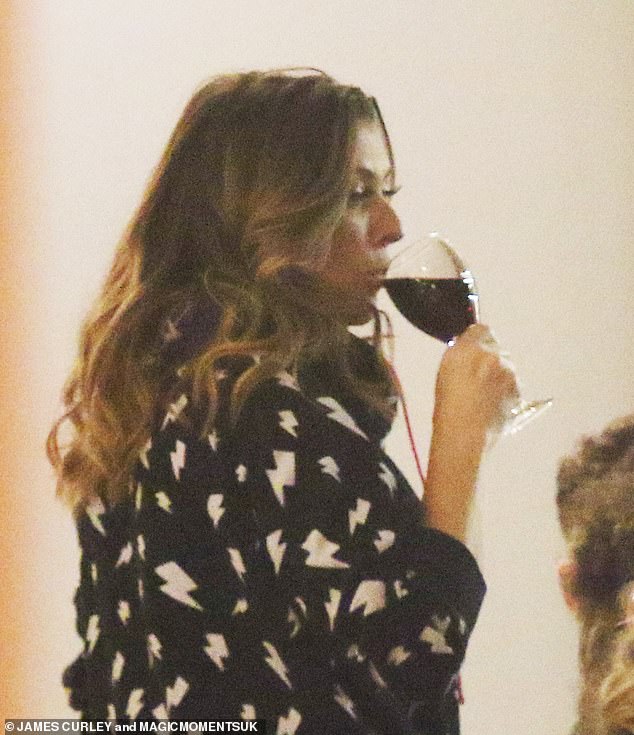 Pour it up: The 46-year-old actress seemed in high spirits as she enjoyed a glass of red wine after returning to their hotel to keep boozing 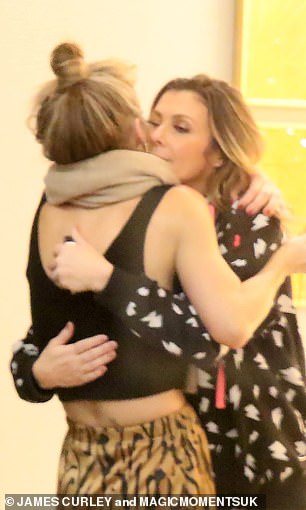 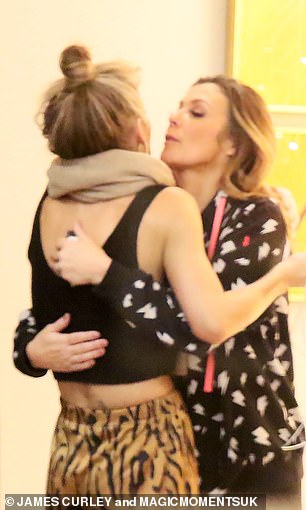 Cuddling up: Kym was in an affectionate mood at the party, wrapping her arms around Helen and planting a kiss on her cheek

Fleur also took advantage of the free bar, enjoying a glass of red while clad in a sports bra and leggings.

The Christmas party comes ahead of the quarter-finals for Strictly, which will air on Friday night after rescheduling for the World Cup.

Kym will no doubt be pleased to get back on the dancefloor after she was forced to miss last week’s show when she contracted Covid. 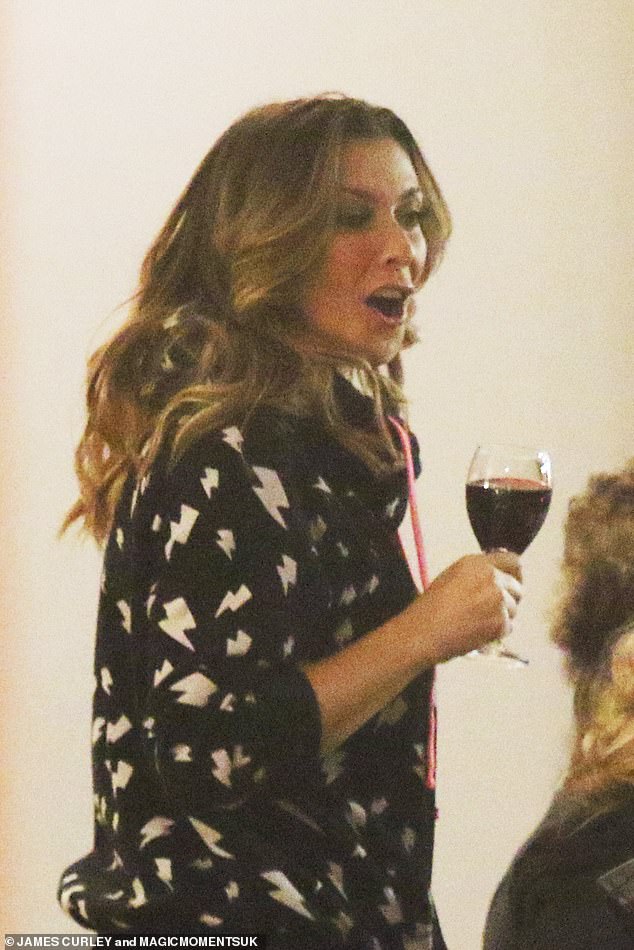 Low-key: After changing out of their glamorous partywear, the team were casually clad, with Kym donning a black hoodie bearing white lightening bolts 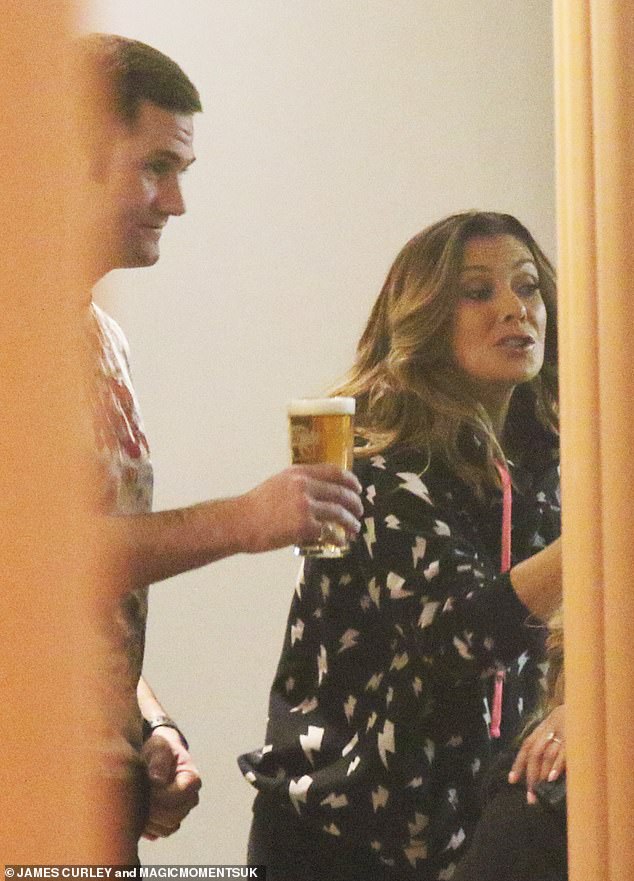 Pour it up: Kym’s husband Scott Ratcliff was seen at the party enjoying a pint

The former Corrie actress, who returned to training this week, joked she had ‘swapped sequins for tissues’ during her appearance on Thursday’s It Takes Two.

She told host Janette Manrara: ‘[Watching from home] was so weird, I had such FOMO (fear of missing out), I swapped sequins for tissues’.

‘I watched it with two tissues stuck up my nostrils.’

Her dance partner Graziano Di Prima added: ‘She called me sick from bed and I told her ‘later…later’.

The duo went on to reveal they will be dancing the Cha Cha Cha to Irene Cara’s hit song Fame during Saturday’s musicals week. 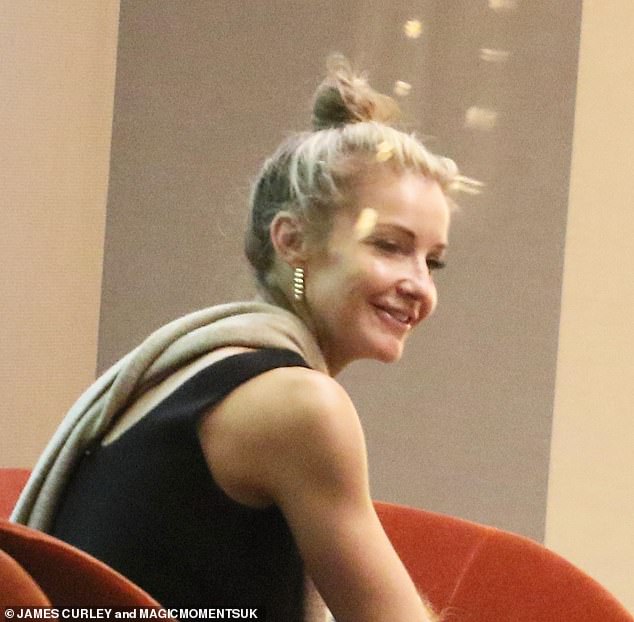 Casual: Helen – who recently sold the gifts given to her at her wedding to ex Richie Myler – donned a black crop top that she paired with tiger print jogging bottoms 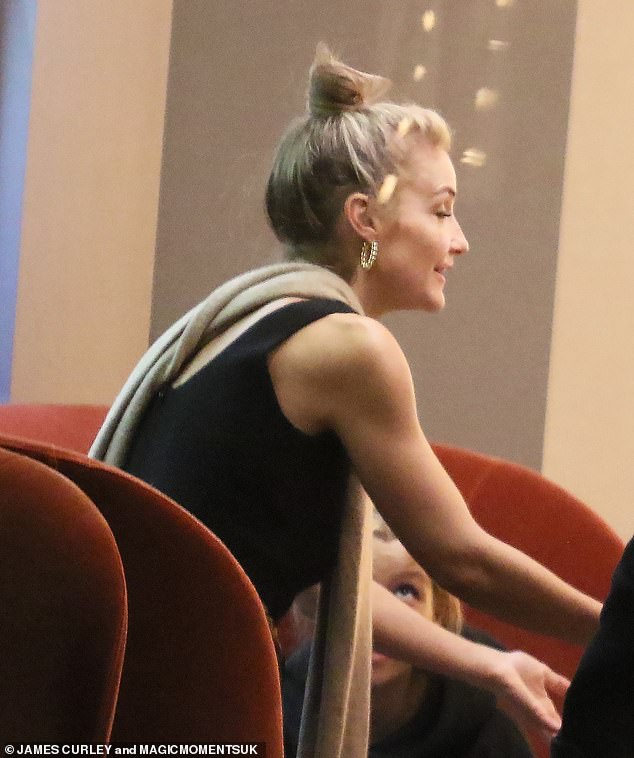 Layers: She wrapped up with a taupe scarf and donned a pair of gold hooped earrings 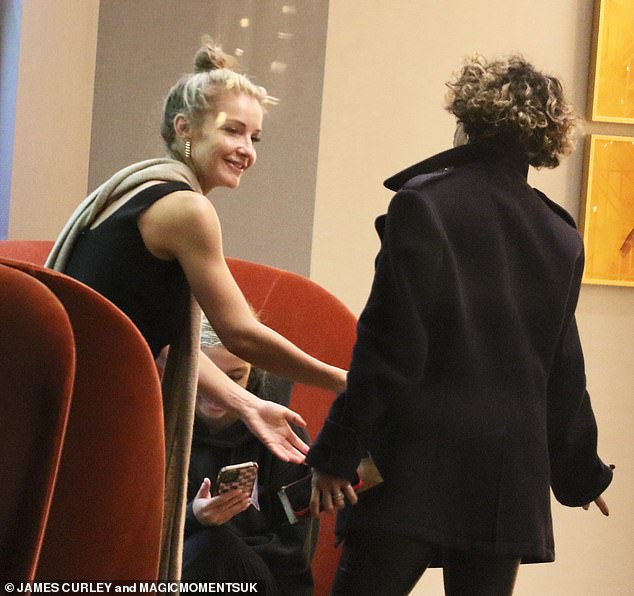 Loving life: She seemed in high spirits as she chatted away with Karen Hauer

Kym added on Morning Live: ‘Start of the week I came down with Covid. That was rubbish. Thankfully I’m testing negative now.’

She added that this past week had been ‘scary’ due to her father – who was recently diagnosed with incurable prostate cancer – suffered a health scare.

Kym said of her parent: ‘Dad went into hospital during the week and I’ve not been able to see him. I tested negative and I was able to see him but it was very scary for a couple of days. It’s been a bit of a full plate at our end.’ 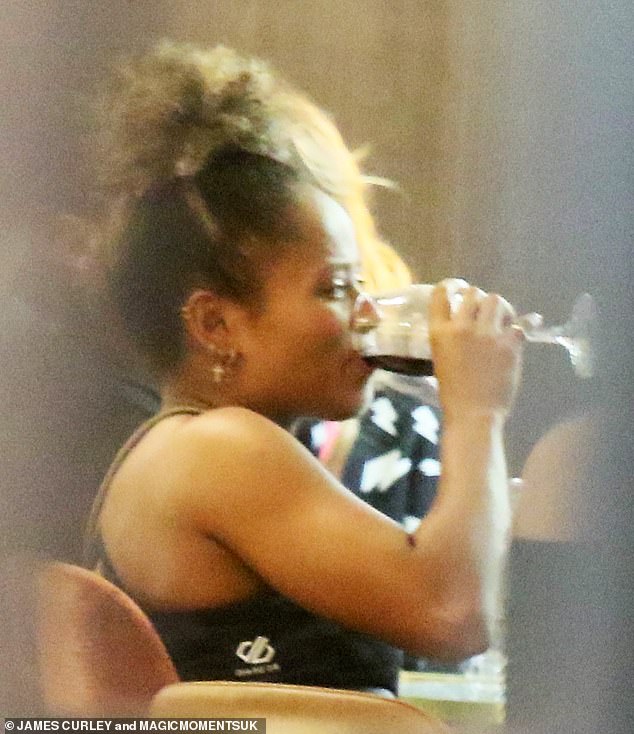 Yum: Fleur also took advantage of the free bar and enjoyed a glass of red wine 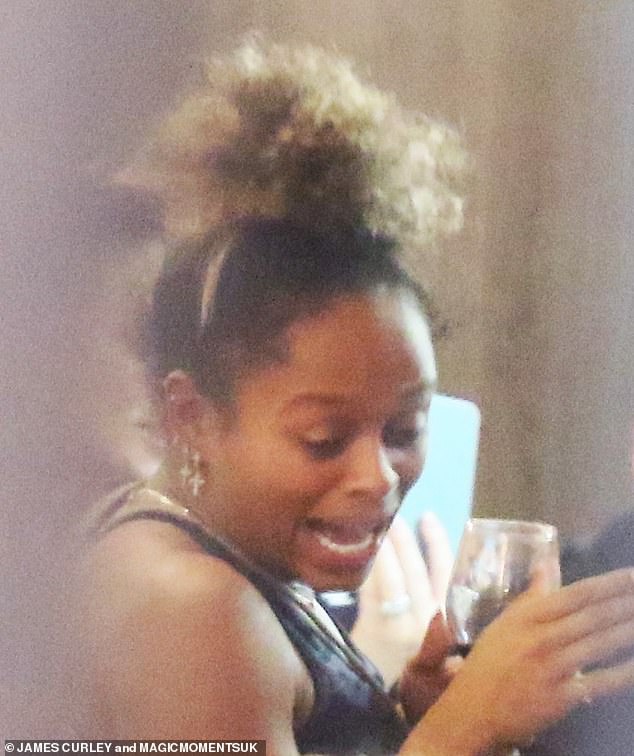 Animated: The singer put on a very animated display at the bar 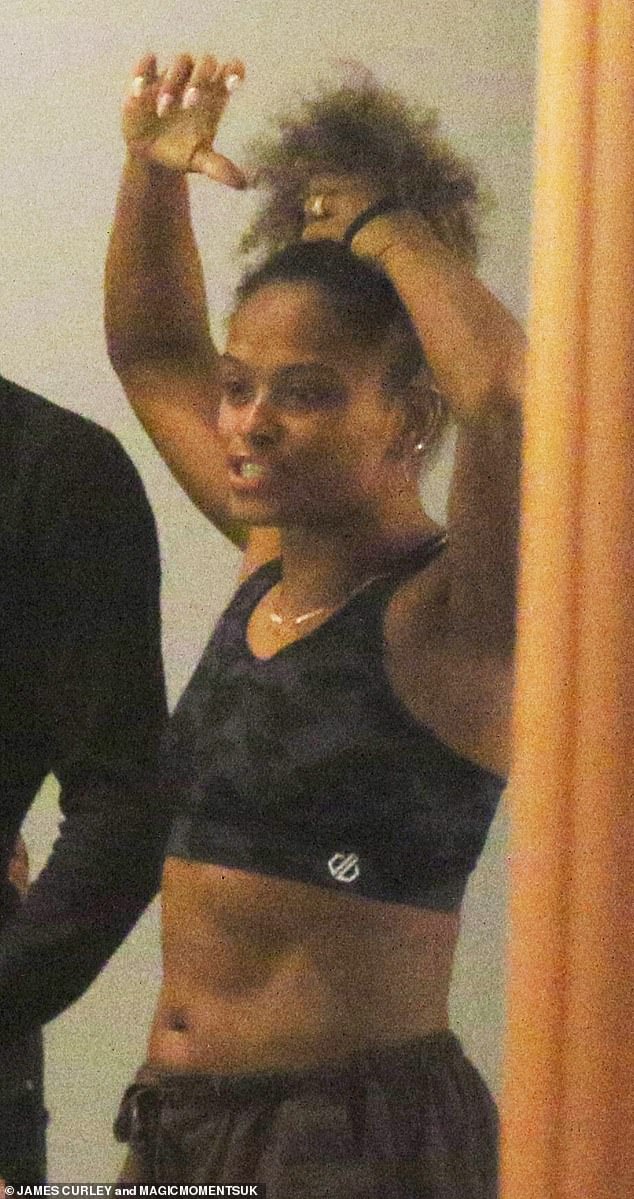 Ab-tastic: Fleur was clad in a sports bra and leggings that showed off her fit figure

Graziano admitted it was the ‘hardest thing ever’ to watch Strictly from home as he also appeared via video link.

He said: ‘I can’t wait to see you. We take for granted that we spend so much time together. Being apart for a week has been strange. 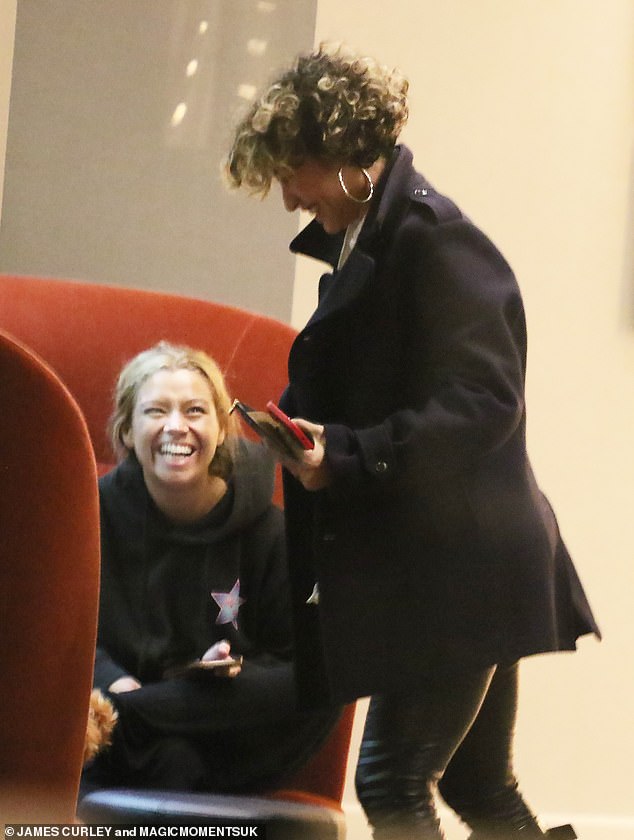 Catching up: Molly Rainford couldn’t control her giggles as she chatted away to Karen 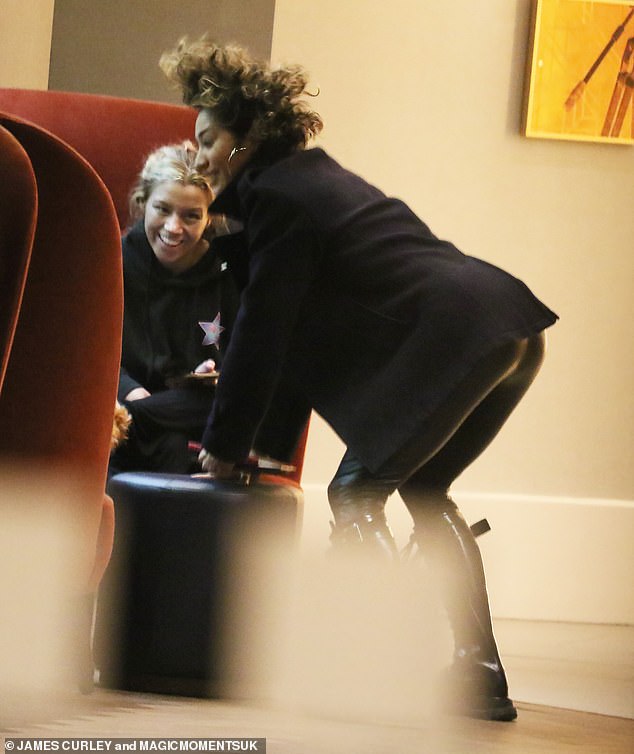 Last week, a Strictly spokesperson confirmed that Kym would be sitting out this week as a result of the virus.

They told MailOnline: ‘Kym Marsh has tested positive for Covid-19. As a result, Kym and Graziano will not be taking part in Strictly Come Dancing this weekend.

‘Strictly Come Dancing protocols mean that all being well, they will return the following week.’

And the announcement came just two weeks after Kym admitted she nearly quit the show after suffering a crippling panic attack just hours before the live show.

The television star was said to have burst into tears before she was consoled by twinkle-toed star Graziano ahead of a live show that aired last month.

Former Coronation Street actress Kym, who is said to have contemplated quitting the contest due to her overwhelming anxiety, told The Sun: ‘It just came over me, almost out of nowhere, and I couldn’t carry on.’ 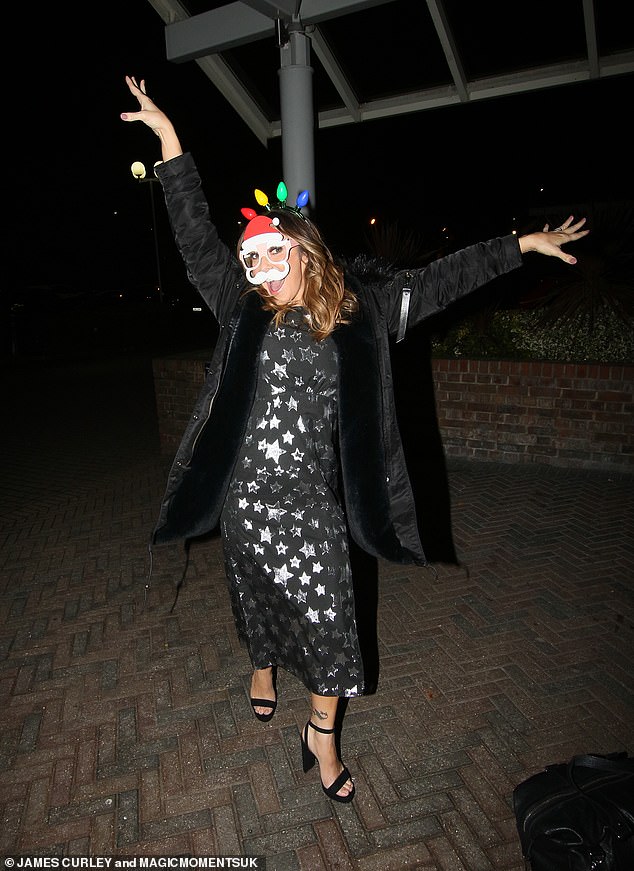 Party time! Earlier in the night Kym had headed to the party in a black star print midi dress 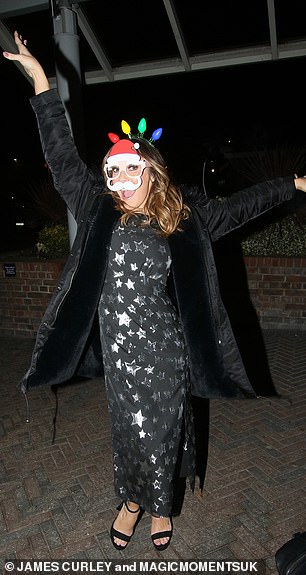 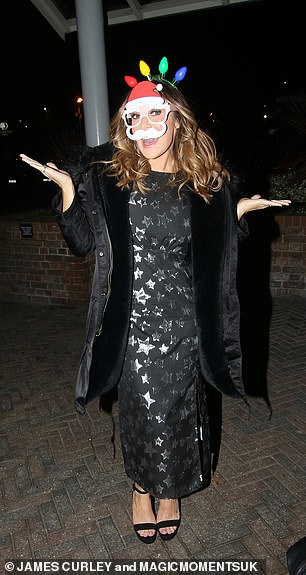 Festive: She got into the Christmas spirit with novelty glasses and posed up a storm outside

It is claimed Kym struggled to continue dancing, prompting producers to comfort her as she calmed down, and hours later she took to the floor again during the live show and completed her dance.

Former Hear’Say singer Kym added: ‘I’ve always suffered from panic attacks. It’s something I don’t mind talking about because I know it can affect anyone at any time.

‘Sometimes it has been ages (since an attack) and then suddenly one just hits. Everyone thinks that because you’re on the telly you must be amazingly confident, but the truth is that I’m not always and this is how that comes out.’ 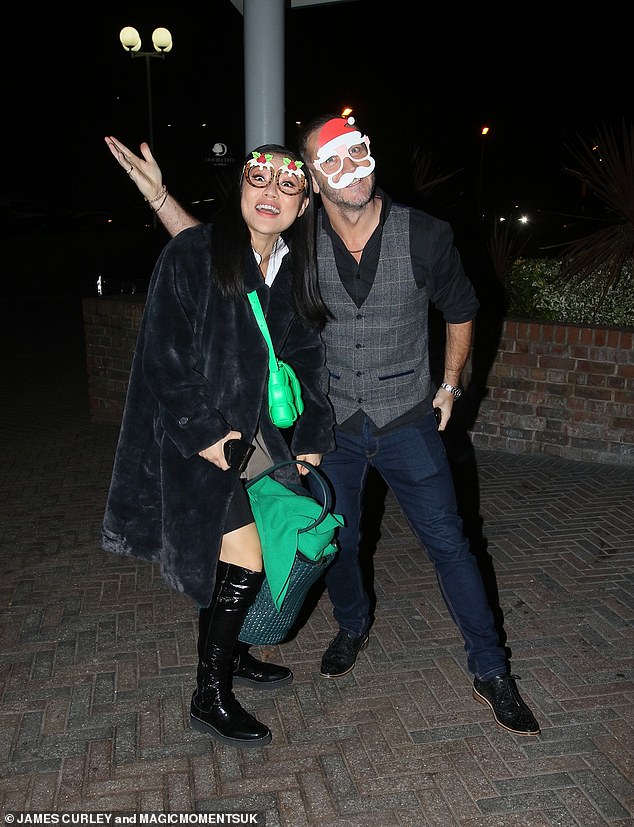 Loving life: Nancy Xu and Will Mellor were larking around as they posed for snaps 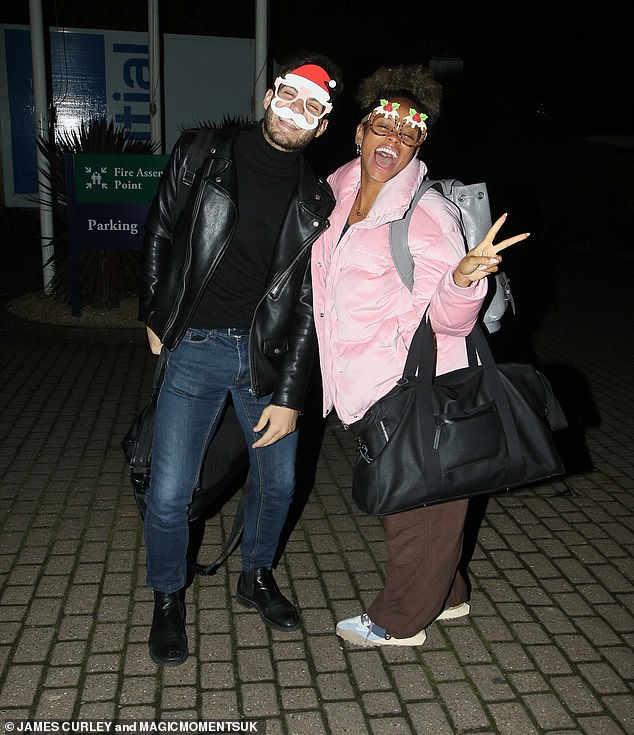 Fun times: Fleur and Vito Coppola seemed in high spirits as they stepped out

She added that she did not know what brought on the panic attack, surmising that it could have been that she’d had some harsh comments from the judges combined with the fact she’d also been working other jobs, leaving her emotional and exhausted.

Kym said she ‘lost her confidence completely’ and ‘went to pieces’, admitting she did not see how she could carry on with the show.

Despite having therapy in a bid to curb her anxiety, Kym said it can still ‘creep up’ on her. 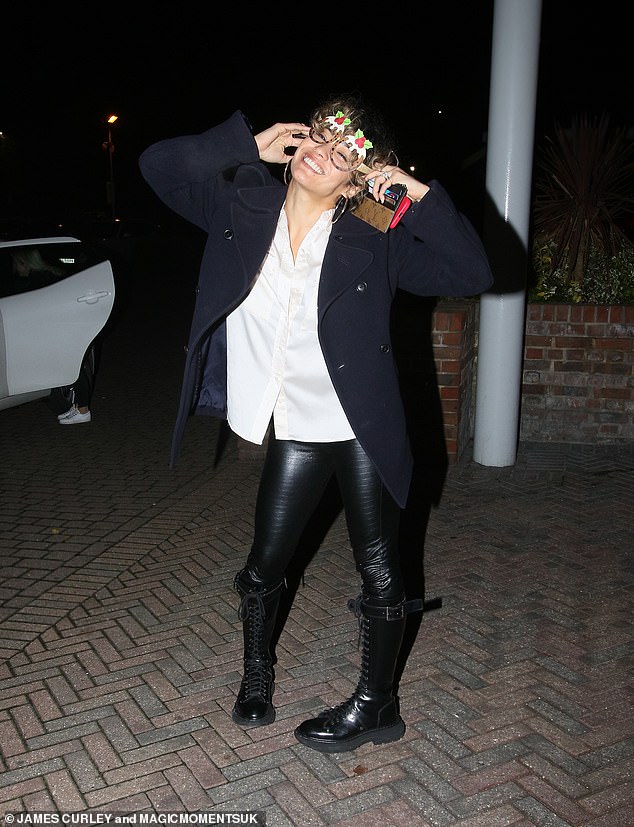 Hiya: Karen beamed as she donned a pair of Christmas pudding framed spectacles

All-smiles: Molly looked in a playful mood as she strutted past in her furry sliders