LA Rams head coach Sean McVay has insisted his NFL peers should put ‘the person before the player’ when it comes to safety.

Tagovailoa was taken out of a game against the Buffalo Bills and analyzed for a possible concussion, but was put back into the game.

The decision to send Tagovailoa back out onto the field is under immense scrutiny. An independent neurological expert has been fired by the NFL Players Association after he said the player was good to go back into the game.

On Thursday night’s game against the Cincinnati Bengals, Tagovailoa went down with a concussion once again, requiring him to be rushed to the hospital.

NFLPA officials are still conducting an investigation into how Miami handled the concussion protocol set out by the league. 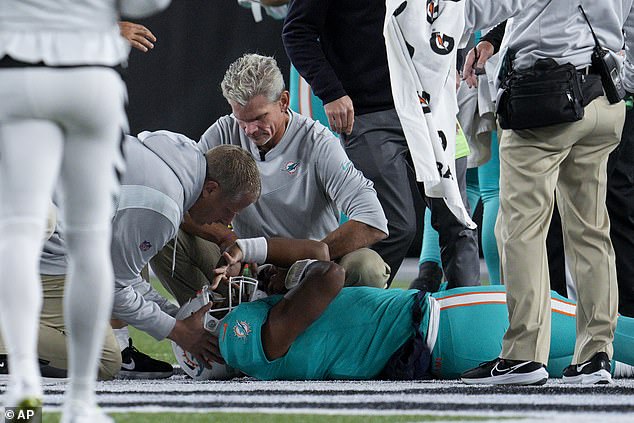 Ahead of his side’s clash against the San Francisco 49ers on Monday night, McVay said he understood the urge to put a player back in the game in the midst of the love of the sport but claimed that it is just a ‘blip in time’ and player safety should be prioritized.

‘I think the biggest thing is that it’s about the person before the player,’ he began.

‘And some of these things, when you realize this game is so important to so many of us, and when you’re in the midst and in the moment of it, you think that this is just going to be forever, but you realize this is a small blip in time.

‘There’s so many things to life with family, with friends, with the people that love and support you and care about you unconditionally, and I think it’s our job as coaches and really in general to look out for the person, one, the player next. And these are things that [I] certainly don’t take lightly. 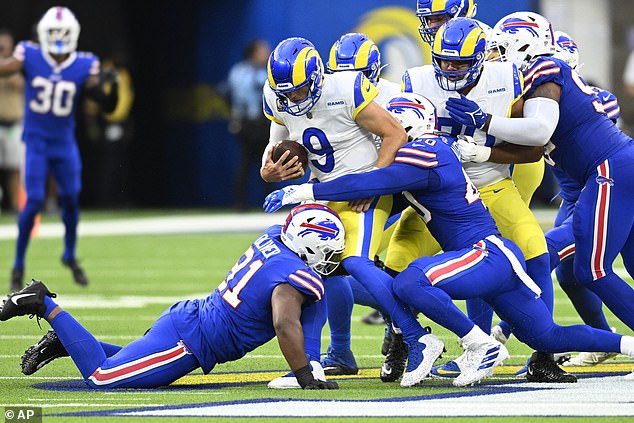 ‘I know that I’m not the expert in that arena, but I also defer to those guys, and I think being able to have relationships where you’re able to kind of understand where they’re coming from, and then you can almost take the decision out of their hands because these guys are such competitors, and there’s an element of, “I don’t want to let people down.”

‘And you got to be able to help them to realize you’re not letting anybody down. This is a small blip, we’re going to be smart with this. This game has brought so many blessings, but you have to be able to draw the line in terms of, “Alright, what’s really the most important thing in the big picture?” And certainly safety always is that at a premium for us.’

‘Whether that happened or not would have zero to do with our approach with David Edwards,’ McVay said when asked if Tagovailoa’s injury caused any ‘heightened awareness.’ 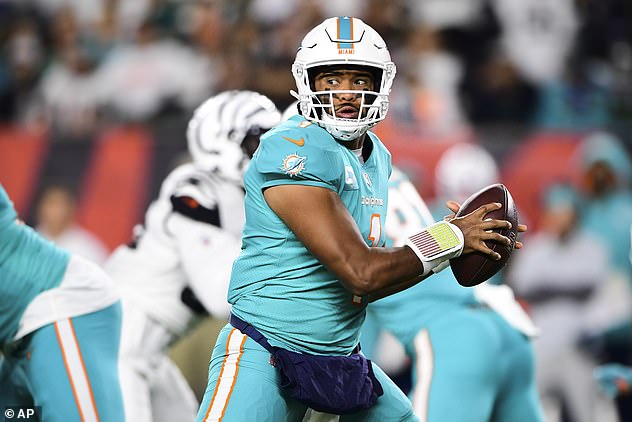 ‘And so, I feel really good about the processes and the procedures that have been in place since I’ve been here and in this role as it relates to the communication with the medical group.

‘I know the NFL’s doing everything in their power to do the right thing by the players, and I fully believe that.’

The Dolphins announced that Tagovailoa will be out this week against the New York Jets as he remains in concussion protocol.

Backup quarterback Teddy Bridgewater was brought into the game to replace him and it’s expected he will be the starter on Sunday for the Jets game.