Federal Labor has scrapped its disastrous negative gearing policy and decided to back tax cuts for well-off Australians.

Leader Anthony Albanese wants the next election, which is due before May, to be all about Scott Morrison’s ‘failure to manage the pandemic’ instead of tax policy.

But the plan went down like a lead balloon with landlords and aspiring investors – and contributed to his shock election defeat to Mr Morrison in 2019.

Labor has also declared it will not seek to overthrow the Coalition’s stage-three tax cuts which come into play on July 1, 2024.

Labor was previously divided on the cuts because they will benefit higher earners. The average full-time income in Australia is $89,000.

The move brings Labor in line with the Coalition on tax policy, therefore avoiding an argument about it at the next election. 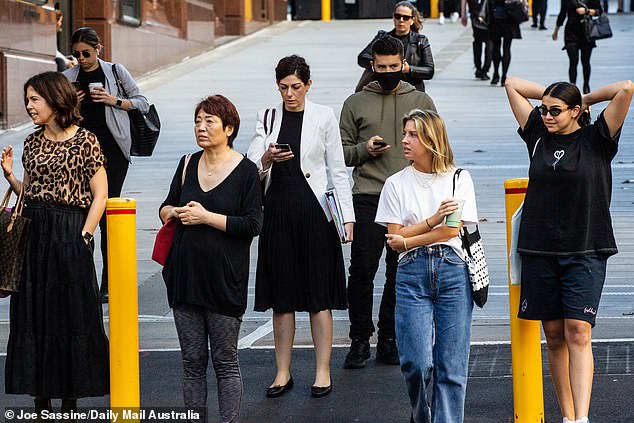 Labor has also declared it will not seek to overthrow the Coalition’s stage-three tax cuts which come into play on July 1, 2024. Pictured: Sydney workers

Mr Albanese announced his policies on Monday after a meeting with Labor MPs and senators.

He said: ‘Our focus is on making sure Australia emerges from this crisis stronger and more resilient – with an economy that works for working families not the other way around.

‘When it comes to the economy, the next election will be about the Prime Minister’s dangerous and costly failures to manage the pandemic.

‘His failures on vaccines and quarantines have caused lockdowns 18 months into this pandemic, and those lockdowns are causing billions of dollars in damage to the economy.’

Mr Albanese, who has represented Grayndler in Sydney’s inner west since 1996, said he wanted to provide ‘certainty and clarity to Australian working families after a difficult two years for our country and the world.’

The policy would have stopped non taxpayers – mostly retirees – claiming money back from the government for tax paid on shareholder dividends.

It was branded the ‘retiree tax’ by the Coalition during the 2019 election campaign.

Mr Morrison is under huge pressure over the nation’s stunted Covid-19 vaccination program which has only jabbed 16.13 per cent of over 16s, leaving millions in lockdowns across three states.

‘His failures on vaccines and quarantines have caused lockdowns 18 months into this pandemic, and those lockdowns are causing billions of dollars in damage to the economy,’ Mr Albanese said.

‘Over eight long years in government, the Coalition’s record is clear in the lives of everyday Australians: stagnant wages, insecure jobs, increased costs for health care and childcare, longer waits to see a GP, and a trillion dollars in debt.’

What is negative gearing?

Gearing is when you borrow money to invest, and it’s typically talked about in the context of investment properties.

A property is positively geared when your rental return is higher than your interest repayments and other property-related expenses (e.g. strata levies, council and water rates).

A property is negatively geared when your rental return is less than your interest repayments and other property-related expenses.

The key benefit of negative gearing is that any net rental loss you incur during the financial year may be offset against other income you earn, such as your salary.

This reduces your taxable income and how much tax you have to pay.