By Ben Hill and Wade Sellers For Daily Mail Australia

Labor leader Bill Shorten is so confident of becoming Australia’s next Prime Minister that he sent a letter to Scott Morrison asking for a ‘smooth transition of power’.

Labor is looking likely to win the next election after it maintained a six-point lead over the Coalition in the latest Newspoll following a tumultuous fortnight in politics.

Mr Shorten’s front bench will try to meet with senior public service officials in the next few weeks, the Daily Telegraph reported.

In his letter, Mr Shorten said the Opposition had the right to see public service briefings in the three months before an election, which he determined to be now.

Mr Shorten said the briefings were ‘intended to ensure a smooth transfer of power if an election results in a change of government’.

The next federal election is expected to be held on May 18.

‘This letter serves as notice that the Opposition intends to begin exercising its right to seek public service briefings under the guidelines, noting that we have now passed the three month deadline from the effective expiry of the parliament,’ Mr Shorten wrote.

‘According to the Parliamentary Library, the latest date for a regular House of Representatives and half-Senate election is 18 May, 2019. The three month deadline from the effective expiry of the parliament is therefore 18 February, 2019.

The Opposition remains ahead of the Liberal-National coalition with an unchanged two-party preferred vote of 53-47 per cent, according to the last Newspoll published by The Australian on Sunday night.

The Coalition’s primary of just 37 per cent remains unchanged since the start of the year.

The two-party preferred vote hasn’t shifted since the start of the year but both prime minister and the opposition leader suffering hits to their respective approval ratings. 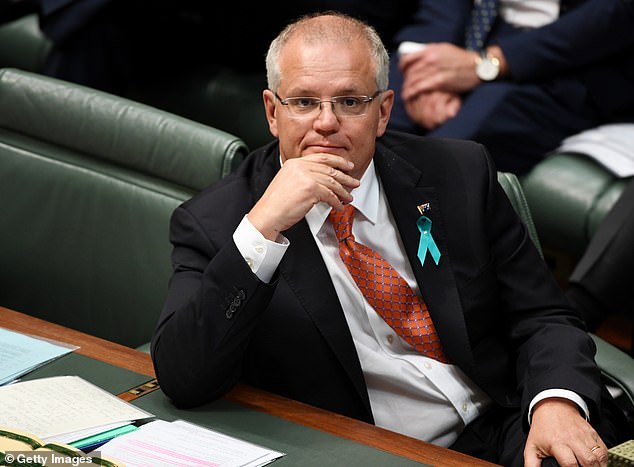 In his letter, Mr Shorten told Prime Minister Scott Morrison (pictured) that the Opposition had the right to see public service briefings in the three months before an election

Prime Minister Scott Morrison’s approval rating dropped to one per cent to 42 per cent, while Bill Shorten was at 35 per cent.

More people disapproved of Mr Morrison, with 48 per cent of those surveyed unhappy with his performance while those who disapproved of Labor leader Bill Shorten grew two points to 53 per cent.

The poll was conducted between February 21 and 24 and surveyed 1,582 people across the country in both city and country regions.