Labor narcs try to catch out new NSW Premier Dom Perrottet for going for a lunchtime jog outside of his 5km home radius – but do they have a point?

A Labor-supporting Facebook page has accused new NSW Premier Dom Perrottet of breaching Covid rules on his second day in office – with the new leader angrily denying the claim at a press conference.

ALP Spicy Memes Stash, a satirical page inspired by the meme culture of US politics, potsed a picture from Mr Perrottet’s Instagram account with the comment, ‘Celebrating Day 2 of being Premier by breaching the public health orders!’

The Insta story posted by Mr Perrottet on Wednesday morning shows him in a Nike jogging shirt in front of the Sydney Harbour Bridge with the caption, ‘Best city in the world.’

The memes page and people commenting underneath its post claimed Mr Perrottet breached current Covid restrictions in Sydney by engaging in exercise or outdoor recreation outside of his local government area or within 5km of his home.

Mr Perrottet, the MP for Epping, lives at Beecroft in Sydney’s leafy north-west, 24km from the Sydney CBD. His office is in Martin Place, in the central city.

‘He’s over 5kms away from his place of residence, whether you agree with the decision or not, it’s a horrible look for a state official to go against public health orders,’ one person commented on the post.

‘If the government undermines themselves, why should we take them seriously?’

Other people questioned whether the pic was old, one person commenting: ‘Please don’t stoop to posting misleading, out of context pictures. There is more than enough real issues to focus on.’

Mr Perrottet addressed the issue at a press conference this afternoon, saying he had checked with the head of the Department of Premier and Cabinet’s legal team.

‘I enjoyed a lovely run by myself in this beautiful city on a great day.’ 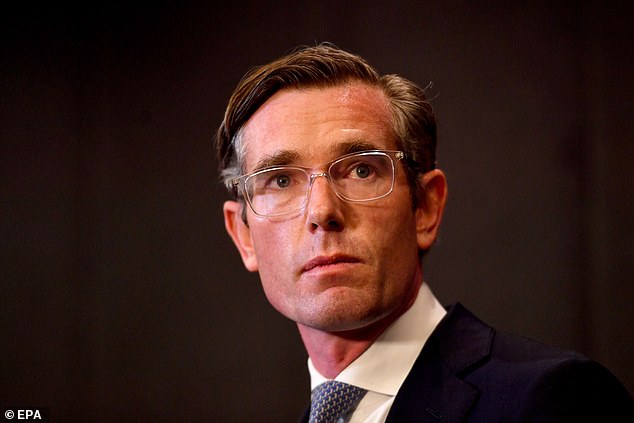 He said the advice he received confirmed that if a person’s work was outside their LGA, they could go for a walk, buy lunch or go for a run.

‘I double-checked before I went,’ he said.

The rules as they appear on the NSW government Covid site do not specify whether exercise or outdoor recreation can be taken 5km from a place of work.

Daily Mail Australia had approached NSW Police for comment on whether Mr Perrottet had breached the public health orders.