Taxpayers could be footing a $3.3billion bill if Labor leader Bill Shorten comes to power and raises unemployment benefits.

The Labor Party’s newly released draft national platform says $550 a fortnight for the jobless is inadequate.

‘The current rate of Newstart is too low and is a barrier to people finding work and participating in society,’ it said.

The ‘Creating An Inclusive Australia’ section of Labor’s manifesto committed the party to reviewing the ‘adequacy of Newstart … to address inequality and social mobility’.

Labor’s left and right factions are set to debate how to fund an increase in unemployment payments at the party’s triennial national conference, being held in Adelaide from December 16 to 18.

While the Labor Opposition is yet to put an amount or a price tag on raising Newstart, the Australian Council of Social Service estimated raising the weekly amount by $75 to $350 would cost $3.3billion a year.

It released economic modelling it had commissioned by Deloitte Access Economics to justify the ‘catch up increase’, arguing Newstart hasn’t been raised in real terms, to account for inflation, since 1994. The Greens have vowed to raise Newstart by $75 a week, and have proposed to raise the revenue by taxing the rich to fund an increase in the Centrelink payment.

Greens leader Richard Di Natale this week told the Australian Council of Social Service’s national conference in Sydney his minor party wanted to impose a minimum average tax rate of 35 per cent on earnings of more than $300,000 a year, which would affect the richest 0.5 per cent of ­income earners. 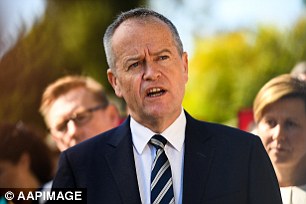 A Newspoll released this week showed Labor winning next year’s federal election in a landslide, 54 per cent to 46 per cent after preferences.

Labor, however, would be beholden to the Greens to pass legislation in the Senate were the Coalition to oppose its plans to raise Newstart, with major parties rarely winning a majority in the federal upper house.

Former Liberal prime minister John Howard and the Business Council of Australia, which represents some of Australia’s biggest companies, have both called for an increase in unemployment benefits.