Labor premiers are slammed over border closures and ‘heavy-handed’ rules

Labor governments in Queensland, Western Australia and Victoria are facing mounting criticism over their reluctance to reverse prohibitive lockdown rules.

The Queensland and WA premiers are being roasted over their border closures, which are sapping billions from the economy and leaving thousands of businesses on the brink of collapse.

Meanwhile, Victorian Premier Daniel Andrews is being slammed for his ‘heavy-handed’ coronavirus rules including banning workers from going to the office and fining them if they do. 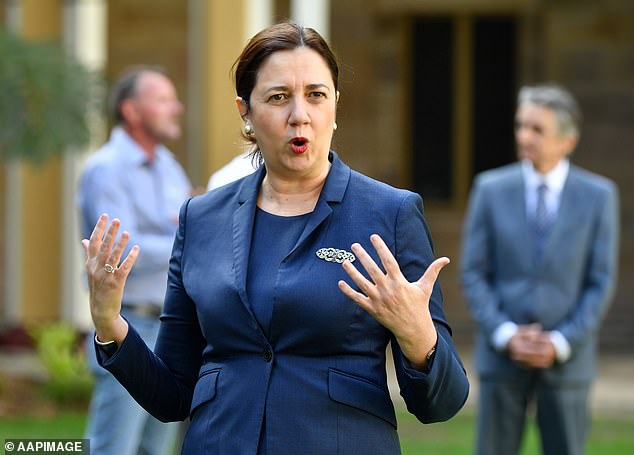 Anger came to a head in Queensland yesterday when hundreds of tourism operators in Cairns, the Sunshine Coast and the Gold Coast protested against the border closure.

One in nine Queenslanders work in the tourism industry which contributed $27billion to the state’s economy last year.

Business owners say they need interstate travel because the bulk of their domestic revenue would come from southern customers seeking sun during the colder months.

Premier Annastacia Palaszczuk is under fire for releasing a road map saying the border would come down on July 10 but then changing her mind and saying September is more realistic.

Shadow minister for tourism David Crisafulli told Daily Mail Australia the premier has ‘pulled the rug from under the feet’ of business owners and caused mass confusion by failing to decide when the border can open.

‘The biggest criticism for me is the mixed messages, moving goalposts and the confusion,’ he said.

Ms Palaszczuk has justified her border closure by saying there are too many cases of the virus in NSW and Victoria. But New South Wales has not had a single case of community transmission for a week. 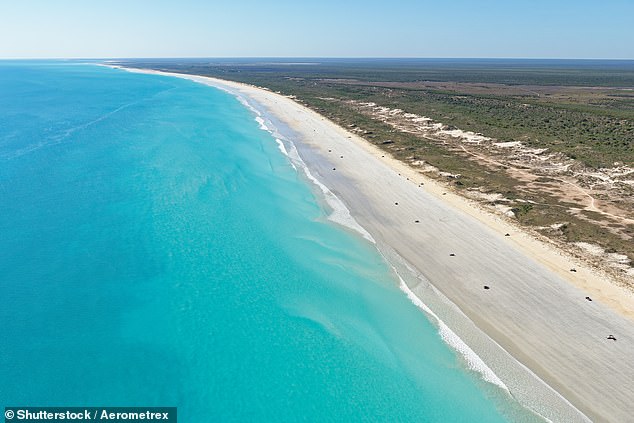 Aerial view of cars dotted along the wide expanse of Cable Beach, Broome, which is closed off to tourists outside WA 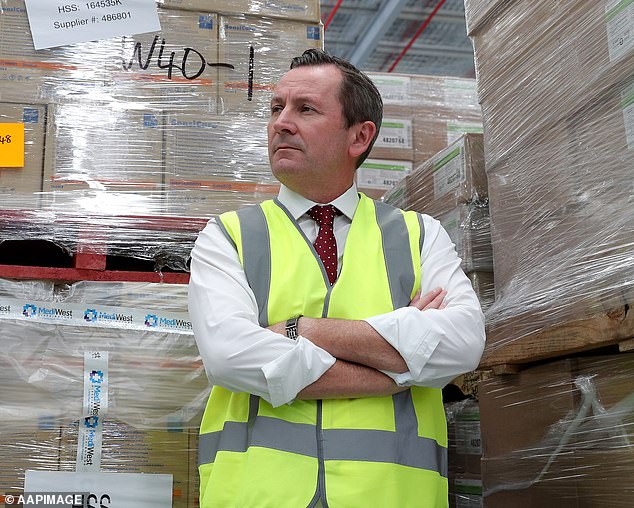 Some businesses are so furious that they have launched a legal challenge, claiming that closing the state border is illegal under the Australian constitution.

One of the plaintiffs, Retail Services Group owner Sue Jeffreys, said of the premier: ‘I don’t think she has any idea what she’s doing.’

Pressure is also mounting in WA where Premier Mark McGowan has steadfastly refused to open the border and said NSW and Victoria residents represent a threat to the health of West Australians.

Tourism is a crucial industry for the state, generating 100,900 jobs and injecting $12.2 billion into the economy each year.

The Liberal Opposition has slammed his defiance and accused him of ‘scaremongering’.

‘There is no reason why travel between South Australia and the Northern Territory, where there is no evidence of community spread of COVID-19, can’t be allowed first in a staged approach,’ she said.

Critics says he has thrown aside Labor’s supposed values of compassion and care for others and retreated to parochialism, even demanding that a cruise ship containing sick passengers ‘get away from our state’ as soon as possible.

The federal government is also pressuring states to open their borders. ‘The expert medical advice at a national level never recommended internal borders within Australia. It’s not good for the economy,’ said Prime Minister Scott Morrison. 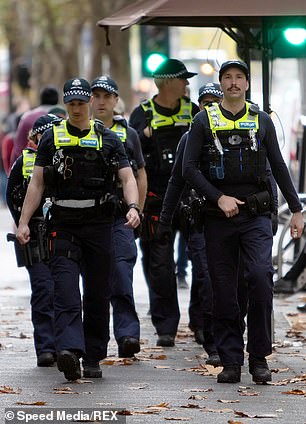 It is not only the Labor states which have closed their borders but Liberal premiers in Tasmania and South Australia are already planning to loosen restrictions with a possible travel bubble between the two states and Canberra.

And the Labor opposition in both states, far from pressuring the government to open up the borders, has either urged caution or stayed silent on the matter.

Meanwhile in Victoria, Premier Daniel Andrews is copping criticism over his apparent reluctance to open up the economy.

Mr Andrews has been the strictest premier throughout the COVID-19 crisis, even refusing to re-open schools when federal health officials said it was safe.

Last week he banned white-collar workers from returning to their offices and threatened fines for any boss who ignores the rules.

He also urged workers to report any breaches and instructed police to randomly check offices.

The move has infuriated Victorian Liberal MPs who believe his ‘heavy-handed’ approach is holding back economic recovery.

James Newbury, Liberal MP for Brighton, told Daily Mail Australia: ‘Victorians have stopped listening to Daniel Andrews because he has been too heavy handed.

‘His approach will lead to a deeper recession in Victoria than other states. Today he has threatened people for daring to question his direction.

‘The threats are disturbing and certainly not the sign of good leadership’. 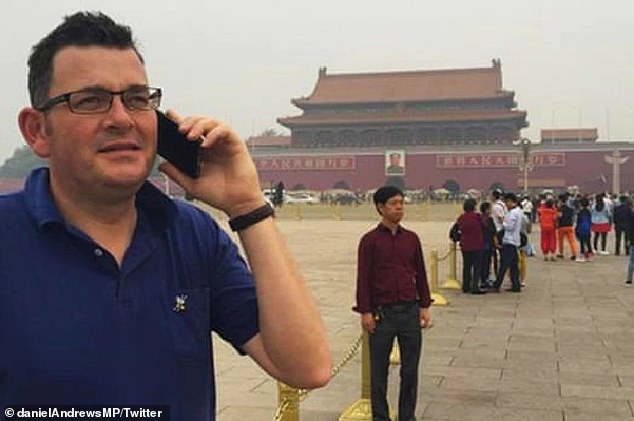 Daniel Andrews (pictured in China’s Tiananmen Square) has been the strictest premier throughout the COVID-19 crisis, even refusing to re-open schools when federal health officials said it was safe

Mr Andrews was also the last state premier to re-open cafes and restaurants, keeping them shut until June 1. Even now,  punters have to buy food if they wish to order a drink.

Liberal MP Tim Smith said: ‘Why can you buy a beer mug at a pub without food in NSW but not in Victoria ? Seems Chairman Dan is at it again with his bizarre puritanical rules.

‘Surely he still can’t say it’s to protect us from ourselves? He really is the most tedious wowser around.’

The premier has also faced crticism over his controversial Belt and Road deal with China which he signed in October without approval from the federal government, earning him the nickname ‘Chairman Dan’ – after Chinese leader Chairman Mao.

In October last year, the Victorian Labor government signed an agreement with China under the country’s Belt and Road Initiative to develop infrastructure and invest overseas.

The Belt and Road Initiative is a Chinese government strategy to build infrastructure and invest abroad, with deals signed all over the world.

But critics say it is a tool to expand influence and power across the globe. 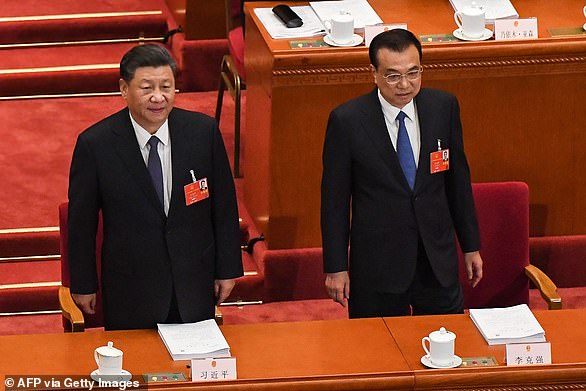 Federal Liberal MP Andrew Hastie told Daily Mail Australia that Mr Andrews had ‘gone off the reservation by conducting his own foreign policy with China’.

As trade tensions with China mount, Mr Andrews has been urged to scrap the agreement, which he claims creates jobs for Victorians.

Michael Schoebridge of the Australian Strategic Policy Institute, said: ‘The Victorian government’s BRI activities are simply out of step with the new international and economic environment, including the now openly coercive directions that Beijing is taking with Canberra over trade and in government relations.’

Victorian Labor senator Kimberley Kitching, chair of the Senate Foreign Affairs Defence and Trade References Committee, said: ‘The Victorian government should not have entered into an agreement with the Chinese government on the Belt and Road Initiative – it is bad policy and bad optics.’