Labor Secretary Alex Acosta is resigning just days after he defended his role in the Jeffrey Epstein case.

Acosta announced that he would leave the administration a week from now as he and President Donald Trump spoke to reporters at the White House on Friday.

Trump brought Acosta out to break the news to journalists as he left the White House for Wisconsin, capping off a week rocked by new federal charges against Epstein in New York for trafficking underage girls.

The president said Acosta called him Friday morning to discuss the decision and that his labor secretary had done a ‘great job.’ He said he did not want the only Hispanic member of his Cabinet to step down and thought that Acosta ‘explained’ his actions well at a Thursday news conference.

‘You can always second guess,’ Trump said of the Epstein case in hindsight. Describing what he told Acosta, Trump said: ‘I said, ‘You don’t have to do this.’

Trump even defended what has been criticized as a ‘sweetheart deal’ Acosta negotiated with Epstein.

‘He made a deal that people were happy with and then 12 years later they’re not happy with it. You’ll have to figure all of that out,’ Trump said.

Acosta previously served as the U.S. attorney who negotiated a deal with Jeffrey Epstein that allowed the convicted sex offender to serve just 13 months in a Florida county jail. 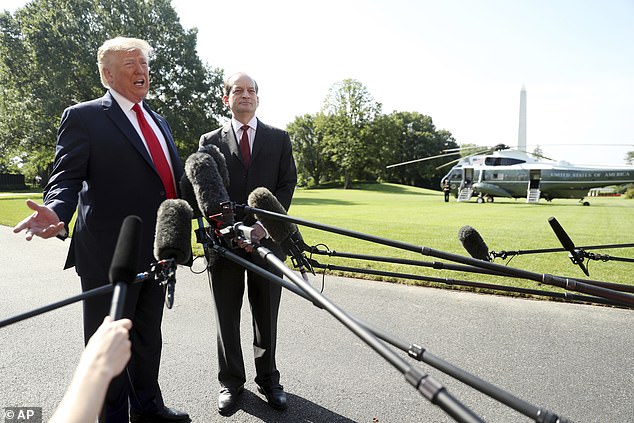 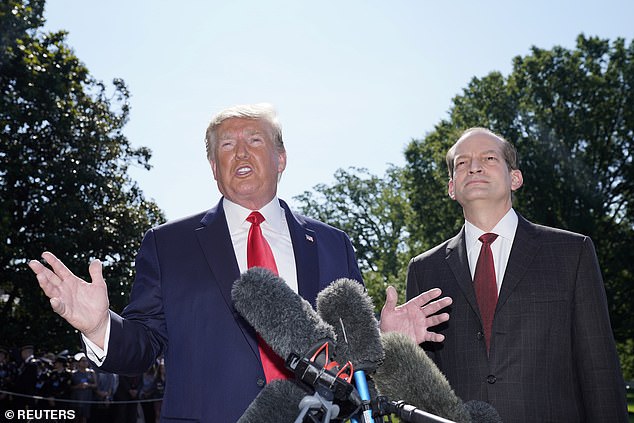 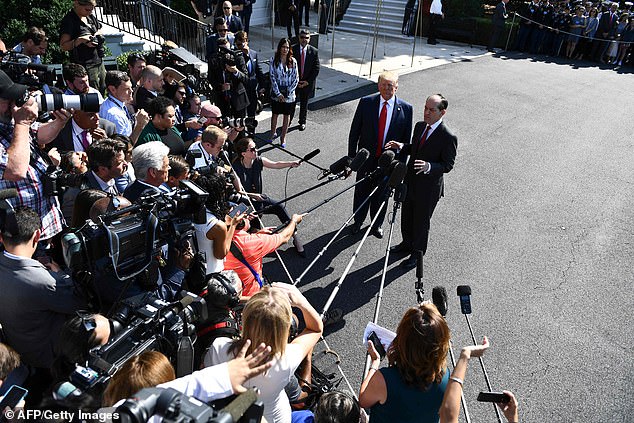 President Donald Trump (L) listens to US Labor Secretary Alexander Acosta as he speaks to the media early July 12, 2019 at the White House in Washington, DC 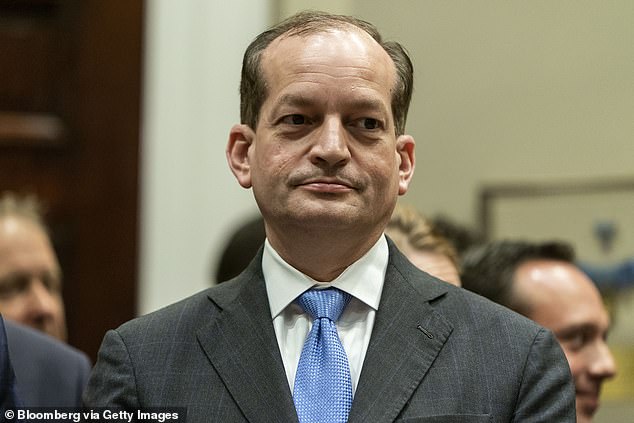 Secretary of Labor Alex Acosta is accused of knowing about alleged witness tampering by Jeffrey Epstein. Prosecutors in New York say Epstein’s lawyers put together a legal ‘proffer’ where he would admit to some such conduct

In vouching for Acosta, Trump pointed to his academic pedigree and Cuban heritage.

‘This was him, not me, because I’m with him,’ Trump said. ‘He’s a tremendous talent. He’s a Hispanic man, he went to Harvard.’

Acosta, who took questions for 53 minutes Wednesday about his role in Epstein’s guilty plea to state charges, said of his decision: ‘I thought the right thing was to step aside.’

‘I do not think it is right and fair for this administration’s Labor department to have Epstein as the focus rather than the incredible economy that we have today,’ Acosta said, explaining his decision.

‘It would be selfish for me to stay in this position and continue talking about a case that’s 12 years old, rather than about the amazing economy we have right now,’ he added.

His resignation is effective one week from Friday, Acosta said.

Defending the deal Epstein got, Trump said: ‘You can always second guess people and you can say he should have been tougher. They do it with me all the time. I make a great deal with anybody, and then they say, like the Democrats, oh it could have been better,’ Trump said.

‘You can always been second-guessed. That’s what people do,’ Trump said.

‘There hasn’t been an ounce of controversy at the Department of Labor until this came up,’ Trump said.

Trump’s decision came on a week when Epstein’s new indictment in New York rocked the Capitol, with reverberations affecting Acosta as well as other powerful people who associated with Epstein over the years.

Powerful Democrats had called for Acosta to step down for his role. An internal probe at the Justice Department’s Office of Professional Responsibility was under way. President Trump was forced to comment on his own relationship with Epstein. And new alleged victims came forward with horror stories about being groomed to join the dozens of other women Epstein brought into his mansions.

Trump reportedly had encouraged Acosta to give the presser as he faced new questions about his role negotiating a 2008 non-prosecution deal – but notably had not weighed in to praise his performance. That, along with the highly-charged nature of the case, lead to speculation that Acosta might not last the week.

Trump also repeated his statement from earlier this week that ‘I was not a fan of Jeffrey Epstein,’ with whom he had social relations over the years. The two men have been photographed at Mar-a-Lago, the private club Trump owns in West Palm Beach, where Epstein also has a mansion.

Acosta was to accompany Trump on Air Force One on a fundraising trip to Midwestern battlegrounds of Wisconsin and Ohio.

Trump also told DailyMail.com that his falling out with Epstein, which the president alluded to in comments earlier this week, had to do with him banning Epstein from Mar-a-Lago, and appeared to confirm that he had imposed the ban.

‘Yes, and I did have a falling out a long time ago. The reason doesn’t make any difference, frankly. But I haven’t spoken to him in probably 15 years or more. I wasn’t a big fan of Jeffrey Epstein, that I can tell you. Now if you look, the remnants hurt this man, and I hate to see it happen,’ Trump said, pointing to Epstein.

Trump confirmed that he threw Epstein out of Mar-a-Lago, but would reveal why.

‘I was not a fan of Jeffrey Epstein, and you watched people yesterday saying that I threw him out a club. I didn’t want anything to do with him. That was many, many years ago. It shows you one thing: that I have good taste, okay?’ Trump said.

A pair of Senate Democrats this week accused Epstein and his lawyers of ‘unconscionable’ efforts to ‘smother’ a federal investigation – and is demanding to know why now Labor Secretary Alex Acosta gave the convicted sex offender a sweetheart deal anyway.

Sens. Patty Murray of Washington and Tim Kaine of Virginia of the Health, Education, and Labor Committee raised the issue of alleged ‘witness tampering’ and other alleged obstructive conduct in a letter to the Justice Department Tuesday.

They point to charges leveled by federal prosecutors in New York, who on Monday unsealed a 14-page indictment accusing the wealthy hedge funder of trafficking in underage girls as young as 14 years old.

Acosta, a former U.S. attorney in Florida, is under fire for having negotiated the deal that let Epstein avoid federal prosecution and serve just 13 months in a Florida county jail.

‘Of particular importance to your office’s inquiry into the conduct of Florida DOJ attorneys, SDNY attorneys have also alleged additional unconscionable and illegal activity by Epstein and his lawyers in their successful efforts to smother the initial prosecution in the Southern District of Florida, including ‘witness tampering, harassment, or other obstructive behaviors,” the senators wrote the head of DOJ’s Office of Professional Responsibility.

They then referenced recent filings in the Southern District of New York.

‘In its bail memorandum, SDNY attorneys cite discussions between Epstein’s lawyers and the Florida DOJ lawyers that demonstrate DOJ knew at the time about issues of obstruction, harassment, and witness tampering,’ they continue. ‘Then-United States Attorney Alexander Acosta subsequently did not bring charges for these offenses, once again illustrating the inequities in our justice system in favor of the rich and powerful.’

According to the memo filed by New York prosecutors opposing bail for Epstein,  ‘there were credible allegations that the defendant engaged in witness tampering, harassment, or other obstructive behaviors.’

‘In fact, according to publicly-filed court documents, there were discussions between prosecutors and the defendant’s then-counsel about the possibility of the defendant pleading guilty to counts relating to ‘obstruction,’ as well as ‘harassment,’ they wrote.

According to the government, Epstein’s lawyer provided a ‘proffer’ to prosecutors – never agreed to – where Epstein would admit he ”attempted to harass both [redacted] delay and hinder their receipt of a [redacted] to attend an official proceeding.’

The proffer would also have had Epstein state that he ‘flew with both [redacted] to the United States Virgin Islands rather than to an airport in New Jersey in order to attempt to delay their receipt of what Mr. Epstein expected to be a [redacted].’ 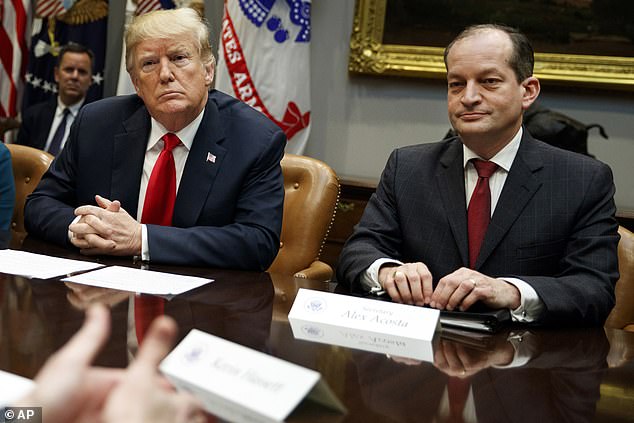 Acosta, seen here with President Trump, is under fire for his role in the Epstein case, and addresses the media Wednesday 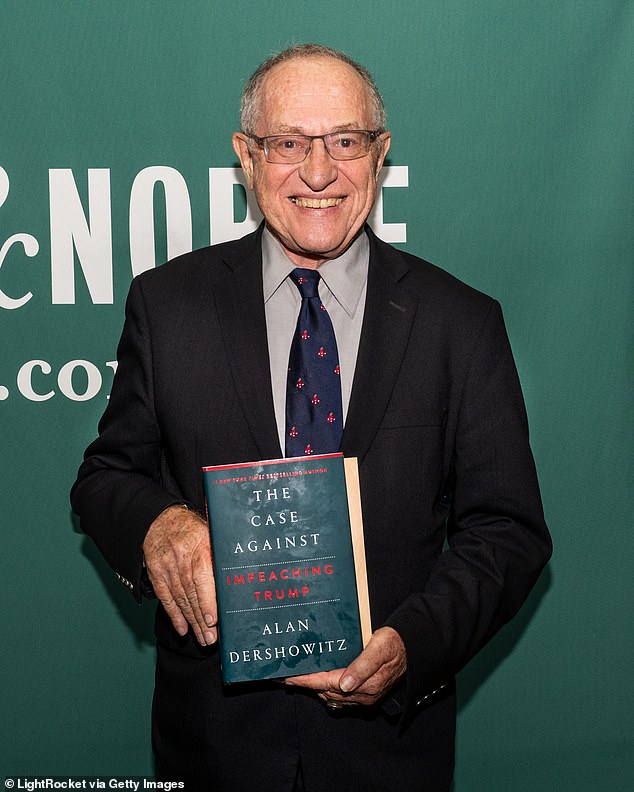 Legal star Alan Dershowitz, who helped represent Epstein, has defended his conduct, and told CBS he would fight to get an even better deal if given the chance 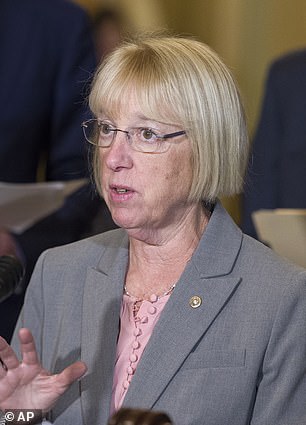 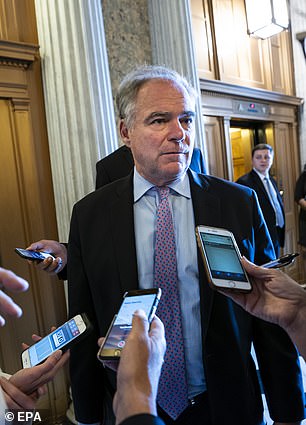 Sens. Patty Murray of Washington and Tim Kaine of Virginia wrote the Justice Department seeking information about an internal probe into the Epstein deal 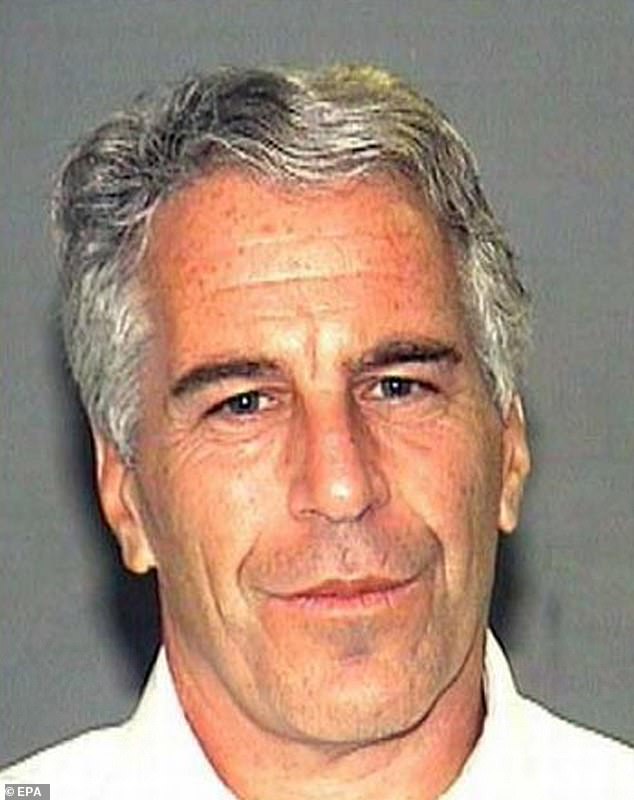 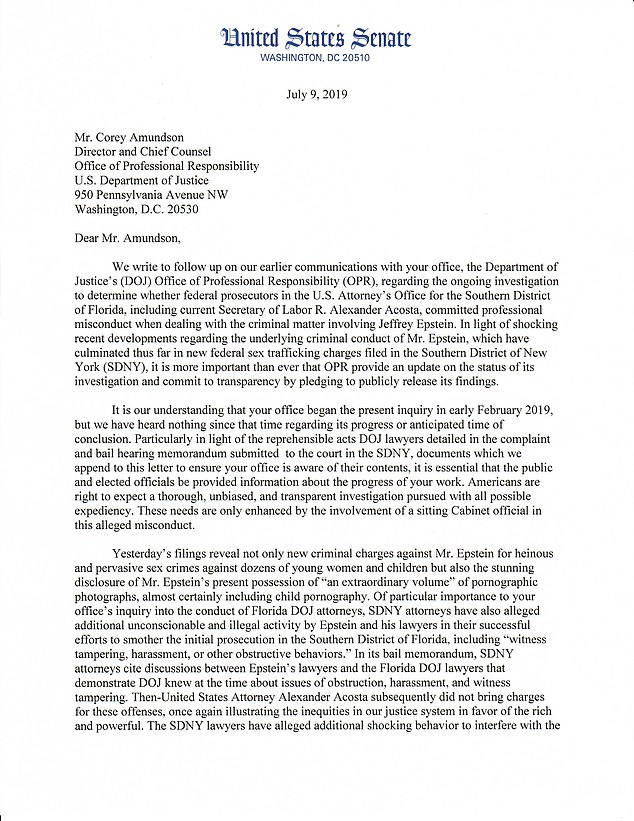 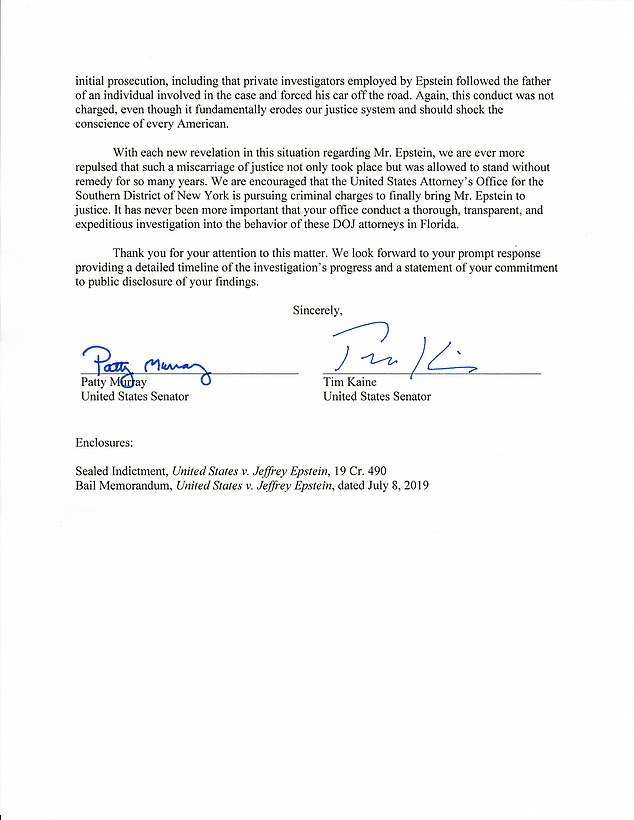 Another possible obstruction plea ‘could rely on the incident where Mr. Epstein’s private investigators followed [redacted] father, forcing off the road.

‘The defendant’s apparent previous willingness to obstruct a federal investigation, harass or tamper with witnesses, and hire private investigators that ‘forc[ed] off the road’ the father of an individual relevant in the investigation is alarming,’ prosecutors wrote.

Senators Murray and Kaine are seeking an update on an internal investigation into Acosta’s role by the agency’s Office of Professional Responsibility.