Labour defector Chuka Umunna hits out at Conservatives and Labour

Chuka Umunna has vowed to ‘forge a new kind of politics’ with The Independent Group – hitting out at tribalism, ‘Blukip’ and ‘disgraceful antisemitism’.

His statement has echoes of the SDP’s stated intention in 1981 to ‘break the mould’ of British politics, may be the clearest sign yet that Mr Ummuna intends TIG to realise the original aims of the Gang of Four.

Writing in the Mirror the former shadow home secretary called on voters to ‘join us, and help us forge a new, different kind of politics for Britain’s future’, saying the established parties had both been taken over by their own extreme wings.

The Streatham MP said it was now clear ‘for all to see’ that ‘politics is broken’, warning of the dangers of tribalism and incompetence.

He wrote: ‘Voters are understandably sick and tired of the same old partisan, tribal way of doing things, which has let our country down for too long.’

He added: ‘The established parties’ failure stems from the way they’ve become increasingly narrow and factional, increasingly refusing to engage with other points of view.’

He goes on to say: ‘The Tories have morphed into “Blukip” where Jacob Rees-Mogg’s ERG hold all the cards and the proud One Nation tradition has been lost. With Labour, we’ve seen disgraceful antisemitism flourish in a climate where no criticism of the party leadership is tolerated.’

Chuka Umunna has vowed to ‘forge a new kind of politics’ with The Independent Group – and hit out at tribalism, ‘Blukip’ and ‘disgraceful antisemitism’

When Labour MPs Roy Jenkins, David Owen, Shirley Williams and Bill Rogers founded the Social Democrat Party they deliberated chose not to name their party New Labour, according to Mr Owen years later, to create a home for disaffected Tories and centrists as well as Labour voters disillusioned by the party’s left-wing leadership.

Only one Conservative ever crossed the floor however and by the time of the 1987 an Alliance between the SDP and the Liberal Party won 23 per cent the vote and 22 seats while Labour under Neil Kinnock won 31 per cent and 229 seats. The mould of British Politics remained intact.

Three anti-Brexit Tory MPs – Anna Soubry, Heidi Allen, and Sarah Wollaston – joined TIG on Wednesday and the Liberal Democrats have pledged to work with the new grouping swelling their voting block to 22.

Mr Umunna said that however people voted in the 2016 referendum, the Brexit process had revealed ‘the failures of both Labour and the Tories’, leaving nobody happy with the results.

He adds that he is proud that The Independent Group, ‘in contrast to the heavily male-dominated Conservative and Labour Parties in Parliament’, is two thirds female.

Mr Umunna says The Independent Group will ‘forge a new, different kind of politics for Britain’s future’, echoing the Labour Gang of Four who announced the formation of the SDP in 1981.

His comments come as a Mail on Sunday poll revealed Mr Umunna as a favourite to win the leadership of the new group. 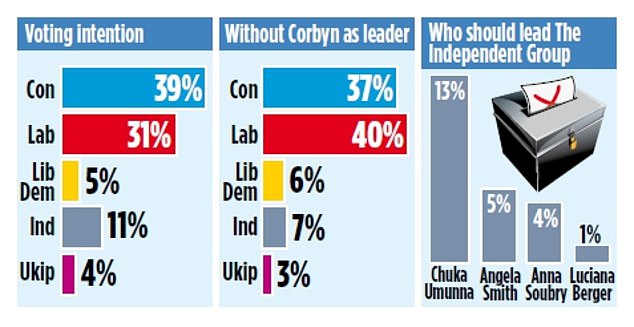 After a week of political drama saw both main parties lose MPs to the new grouping, The Mail on Sunday poll put the Conservatives on 39 per cent and Labour on 31 per cent to win a General Election.

The survey by Deltapoll revealed The Independent Group (TIG) came in third with 11 per cent.

The poll makes Mr Umunna the most popular choice for leader on 13 per cent, followed by his Commons colleague Angela Smith on 5 per cent and Tory Anna Soubry on 4 per cent.

The size of the ‘Don’t Knows’ – at 63 per cent – illustrates the difficulty that the largely unknown MPs will have in achieving a public profile.

The Mirror reports that the Liberal Democrats pledged to work with the group and their 11 MPs would swell numbers to 22 in the event of a merger.

An additional nine Labour MPs are said to be considering leaving the party, along with four Conservatives – which would bring the new group to 35 MPs.