Caroline Flint, who spoke out about the threat on BBC Radio 4

A Labour MP prepared to defy Jeremy Corbyn and back Theresa May’s Brexit deal says she has received a death threat – from a fellow Remain voter.

Caroline Flint revealed she had been warned ‘you’ll be hanging from a rope’ for her views.

And she disclosed that the threat came from someone who, like her, had wanted the UK to stay in the EU.

The former Labour Minister said: ‘So this Remainer says I deserve to be hanged for respecting the EU referendum to leave the EU and a deal which pays our debts.’

The threat came days after a Tory plotter warned the Prime Minister to ‘bring her own noose’ to a showdown with her own party’s MPs rebelling over Brexit.

And last night, there were mounting calls for politicians on all sides to crack down on ‘unacceptable and abusive’ language.

Labour leader Mr Corbyn has told his party to hold firm on its position on Brexit, insisting it was a ‘false choice’ that Labour MPs had to vote either for a Brexit deal brokered by Mrs May or risk a no-deal exit.

She has even suggested one in six Labour MPs could defy Mr Corbyn and do likewise, saying: ‘If you’re going to say no (to a deal), you need some bloody good reasons why.’

But last week, Ms Flint stunned colleagues by revealing she had a death threat for wanting to avoid a no-deal, ‘crash out’ Brexit.

Speaking on BBC Radio 4, she said: ‘Because I believe it would absolutely be a catastrophe for jobs, I received a tweet saying: “Next year, you’ll be hanging from a rope.” ’

The tweet Ms Flint refers to actually says: ‘By this time next year, she will be swinging from a rope, like her Brexiteer mates.’

Ms Flint continued: ‘I campaigned for Remain [but] I accept the referendum result. I want us to get a deal, I don’t want us to crash out without a deal.’

But Ms Flint, an MP for more than 20 years, made clear she was fed up with abuse and insults over Brexit from whichever side of the argument they came from.

She said: ‘I don’t care where the abuse is coming from. But in a democracy, we should be able to have a reasonable debate without recourse to insults and threats.’

She added: ‘Unfortunately in this Brexit debate, I feel like I am literally piggy in the middle between hardline Brexiteers on one side and hardline Remainers on the other.

‘The problem is, we are not having a reasonable debate that can heal some of the divisions and bring the country together.

‘And nobody wants to listen on those extremes of this debate and it’s undermining our ability as a country to move forward, to heal divisions and get the best deal possible. And that, for me, is absolutely a crying shame.’ 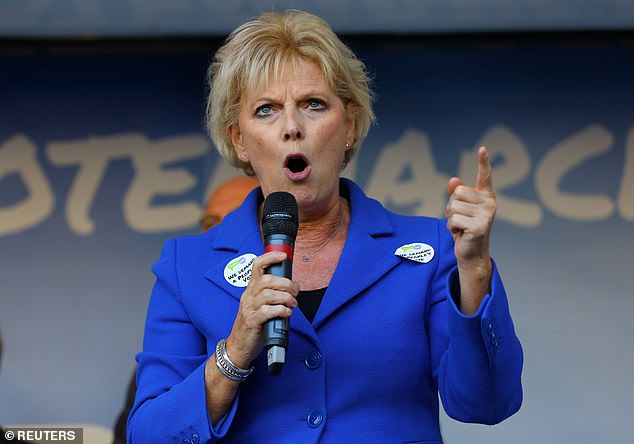 Ms Flint was last night unavailable for comment. But The Mail on Sunday was told the tweet and the name of its author have been passed to the police.

Last week, critics of the Prime Minister faced a backlash at Westminster following the ‘noose’ remark from one Brexiteer rebel and after another reportedly said beleaguered Mrs May was entering the ‘killing zone’.

One former Minister was quoted as saying: ‘The moment is coming when the knife gets heated, stuck in her front and twisted. She’ll be dead soon.’

MPs across the political divide said that in the wake of the brutal murder of Labour MP Jo Cox in 2016, that sort of language was completely unacceptable.

Mrs May said everyone in public life needed to set an example with the language they used.

She told the Commons: ‘There are passionate beliefs and passionate views that are held on this subject [Brexit] and other subjects, but whatever the subject is we should all be careful about our language.’

Her spokesman added: ‘The PM has always been very clear that we must set a tone in public discourse that is neither dehumanising nor derogatory. Personal vitriol has no place in our politics.’