Labour peers are contemplating holding a vote of no confidence in Jeremy Corbyn after he sacked a member of his frontbench team because she compared the ‘bunker mentality’ around him over anti-Semitism to the ‘last days of Hitler’.

Baroness Hayter lost her post as shadow Brexit minister after she attacked Mr Corbyn’s inner circle and the way it criticised the BBC over a documentary probing the crisis which continues to rock the party.

The decision by Mr Corbyn to sack Baroness Hayter, who continues to serve as Labour’s deputy leader in the Lords, has sparked widespread fury among the party’s peers.

They are now reportedly set to hold an emergency meeting on Monday when they will weigh up whether or not to launch a no confidence vote, according to the BBC.

Losing such a vote would have no binding effect on Mr Corbyn but it would inflict significant damage on his already creaking leadership.

A Labour source reacted angrily to the prospect of a no confidence vote as they said it would be ‘undemocratic and absurd’ for unelected peers to try to get rid of a leader who ‘twice won the landslide support of Labour’s membership’.

In a sensational statement issued late last night the party, which is facing a probe from the equalities watchdog over its handling of anti-Semitism allegations, accused Baroness Hayter of being ‘grossly insensitive’ to Jewish people.

The row erupted after an address Baroness Hayter gave to a Labour fringe group. 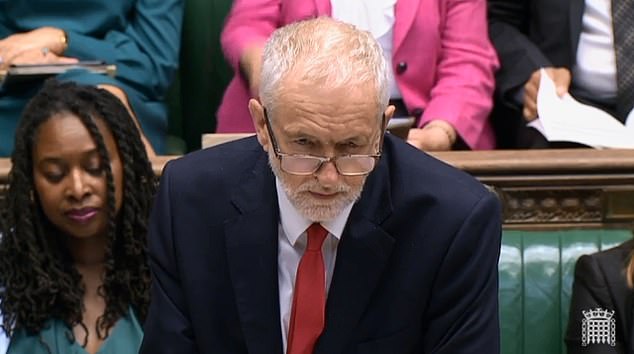 Dame Margaret Hodge, who spoke at the same event, branded the baroness’s sacking ‘ridiculous’, saying that of the five speakers Baroness Hayter had been ‘the most supportive of the Labour Party as it currently stands’.

Cheers in Lords for peer sacked by Corbyn

Baroness Hayter was given a hero’s welcome in the Lords this morning.

Arriving in the chamber shortly after 11am for the first time since her removal, she was greeted with loud cheers from all sides of the House.

Lady Hayter sat just behind the frontbench alongside Lord Harris of Haringey, chairman of the Labour peers’ group and a fierce critic of the Labour leader over his handing of the anti-Semitism row.

During question time, Labour frontbencher Lord Stevenson of Balmacara said the ‘outside world will have noticed the very generous welcome given by the whole House to Baroness Hayter this morning’.

This produced more cheers for Lady Hayter as Lord Stevenson thanked peers for their ‘generosity on this occasion’.

Tory former minister Lord Hamilton of Epsom added his own tribute, saying: ‘We bitterly regret her removal from the frontbench. She and I have had great disagreements over Europe but we much regret the fact she will no longer represent her party on this issue.’

Digital, Culture, Media and Sport minister Lord Ashton of Hyde, who was answering questions on the National Lottery at the time, replied: ‘I agree. Life is a lottery.’

Labour’s deputy leader in the Lords Lady Hayter lost her post as shadow Brexit minister after she attacked Mr Corbyn’s inner circle and the way it criticised the BBC over a documentary probing anti-Semitism in the party.

She remains the party’s deputy leader in the Lords because it is an elected position.

Dame Margaret told MailOnline: ‘It’s a complete travesty of what was said and it confirms the only way the leader can act on anti-Semitism is to shoot the messenger bringing an uncomfortable message about his response to the crisis facing Labour, which is outrageous.

‘I just wish Chris Williamson or Peter Willsman or indeed out candidate in the Peterborough by-election (labour MP Lisa Forbes) had been dealt with as promptly and as severely as they should have been for their blatant anti-Semitism.’

The peer was highly critical of the Labour leader’s inner circle who she claimed had refused to give the party’s ruling National Executive Committee (NEC) key information.

Baroness Hayter said those around Mr Corbyn had a ‘bunker mentality’.

She told a meeting of the centre-left Labour First group: ‘Those of you who haven’t [read the book] will have watched the film ‘Bunker’, about the last days of Hitler, of how you stop receiving into the inner group any information which suggests that things are not going the way you want.’

A Labour Party spokesman said: ‘Dianne Hayter has been sacked from her frontbench position with immediate effect for her deeply offensive remarks about Jeremy Corbyn and his office.

‘To compare the Labour leader and Labour Party staff working to elect a Labour government to the Nazi regime is truly contemptible, and grossly insensitive to Jewish staff in particular.’

Baroness Hayter was given a hero’s welcome when she entered the House of Lords chamber this morning.

Arriving in the chamber shortly after 11am for the first time since her removal, she was greeted with loud cheers from all sides of the House.

The row over her dismissal came after Prime Minister Theresa May yesterday called on Mr Corbyn to apologise for his ‘failure to deal with racism’ in his party.

It savaged his handling of the anti-Semitism crisis and accused the veteran left-winger of ‘failing the test of leadership’.

In the Commons yesterday Mrs May cited the advert, telling him: ‘This is your legacy Mr Corbyn.

‘You have failed the test of leadership, apologise now.’ 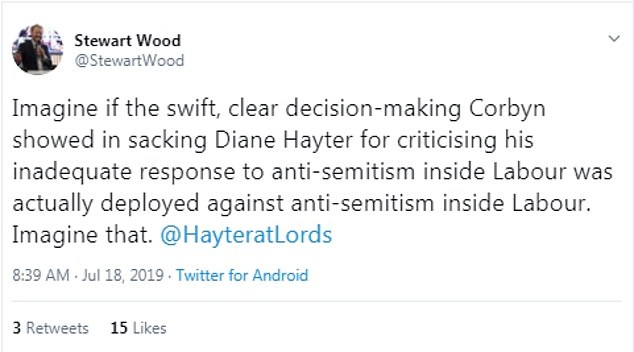 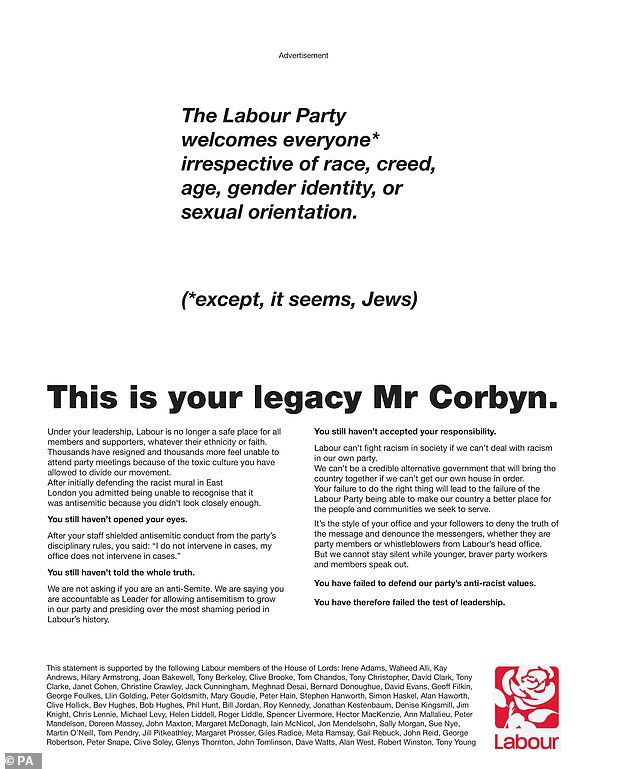 Mr Corbyn hit back saying Labour was totally opposed to racism and calling on Mrs May to deal with Tory Islamophobia.

‘When 60 per cent of Tory Party members think Islam is a threat to Western civilisation, and the Prime Minister has said she will act on Islamophobia within her own party, I hope she does, I look forward to that being dealt with as we deal with any racism that occurs within our own party as well.’