A London council is set to be the first local authority in the country to ban MEAT at it own events.

Enfield Council said it plans to only serve vegan and vegetarian meals when it hosts gatherings from December in a bid to tackle climate change.

The Labour-run north London authority is understood to be the first in the UK to announce such a move, after some universities previously announced similar bans on certain animal products.

Last August Goldsmiths, University of London, in New Cross, south east London, banned beef from its campus in an effort to drive down its carbon footprint.

In September University of Cambridge removed beef and lamb and in February the London School of Economics also banned beef.

Now, from December this year, only vegan and vegetarian options will be offered at events hosted by Enfield Council, it said in a new document.

Events on the council’s calendar for December so far include the Enfield Town Festival, the Edmonton Green Christmas Light Switch On and the Forty Hall Christmas Festival.

The move is set out in the Enfield Climate Action Plan 2020 as part of its aim for the ‘economy to transition to low or zero carbon’.

Deputy leader Ian Barnes, who wrote the forward for the climate action plan, said the council has already declared a climate emergency.

He added: ‘The emergency is real and the action to remedy it must be local, national and global.

‘In response to rising awareness and justified protest, Enfield Council has declared a climate emergency. This plan is our response to that declaration.

‘The council will be carbon neutral by 2030 but we must innovate to do this, taking bold and sometimes unpopular action to tackle the impact of climate change.

‘Whilst the focus in this initial plan is on reducing the council’s own emissions, additional emphasis is given to borough wide activities, such as transport, housing and green spaces, and we have a new ambition for a carbon neutral Enfield by 2040.’ 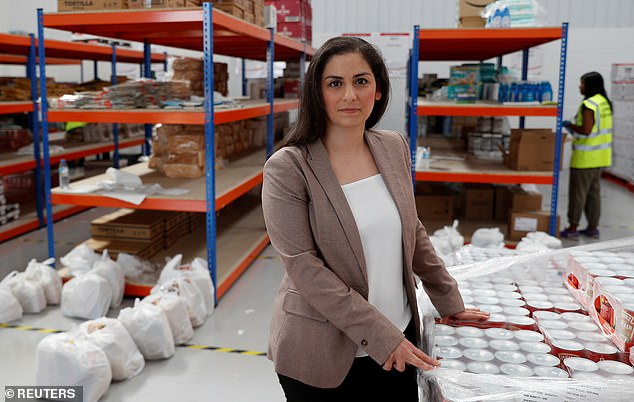 Cllr Nesil Caliskan, leader of Enfield Council, said earlier this month when the emergency was declared because we face an ‘existential threat to life on earth’.

She said: ‘We are utterly committed to tackling the issues around climate change and the environment.

‘The excellent campaigns led by organisations like Extinction Rebellion has brought attended to the desperate need for us all to redouble our efforts and make Enfield genuinely carbon neutral as soon as we possibly can.

‘There is absolutely no doubt that climate change is one of the existential threats to life on earth and everyone needs to work collaboratively to find solutions that work.’

But the proposal has been criticised by Conservatives, who say bans would have a negative impact on farming.

She said: ‘The Labour council’s plan to ban meat at the events it holds where catering is provided is ridiculous.

‘Enfield Council should be supporting local farmers and butchers at this time and pledge to use their produce at future events.

‘It beggars belief that as we continue to deal with the worst pandemic in a century Enfield Council believes it is priority to ban meat at its events. It is people’s choice what they eat, not Enfield Council’s.’

The Countryside Alliance also criticised the plans, adding on Twitter: ‘Banning meat is completely the wrong approach and demonstrates no understanding of how meat in this country is produced, which thanks to UK farming practices, is among the most sustainable in the world.

The backlash has prompted some to defend the decision.

The Animal Welfare Party said: ‘Bravo to Enfield Council taking the visionary decision to take meat off the menu at council catered events – something AWP has called for for several years. Eating plant based is better for people, animals & the environment. #ClimateCrisis’

‘A comparison of even the lowest impact beef with plant protein such as peas shows that beef is responsible for six times more greenhouse gasses and 36 times more land,’ said Ms Calvert.

‘For councils that have declared a Climate Emergency this would be a simple policy to enact which would have a positive impact.

Enfield Council said cafes run by the authority will still serve meat and outside caterers are also free to serve non-vegetarian meals.

A spokesman said: ‘Enfield Council is not banning meat. Our council-run cafes will continue to sell award winning produce, including locally sourced meat alongside a range of vegan and vegetarian options.

‘People organising their own catering are at liberty to choose their own menus.

‘Our Climate Action Plan acknowledges the significant impact livestock farming has on greenhouse gases and global deforestation, which is why the plan encourages more vegetarian and vegan based options, to help mitigate climate risks.

‘Providing a wide range of vegetarian options also helps to cater for a multitude of dietary requirements including Kosher, Halal, celiacs and gluten-free.’