Labour would introduce a four-day working week of just 32 HOURS WITHOUT cutting salaries because people should ‘work to live, not live to work’ says John McDonnell

Labour would introduce a 32-hour week for workers without them losing money within the next decade, John McDonnell claimed today.

The shadow chancellor said that it was important people ‘work to live, not live to work’ as he addressed the Labour Party Conference in Brighton.

It was one of a swathe of employment policies unveiled the hardline frontbencher, including scrapping zero-hours contracts.

Labour has already called for a four-day week for workers in an age of increased automation.

Mr McDonnell said the UK had the longest working hours in Europe behind Greece and Austria and there had been little progression cutting average hours since the 1970s.

To applause from hundreds of delegates and activists this afternoon he said: ‘I can tell you today that the next Labour government will reduce average full-time hours to 32 a week within the next decade.

‘It will be a shorter working week with no loss of pay.’ 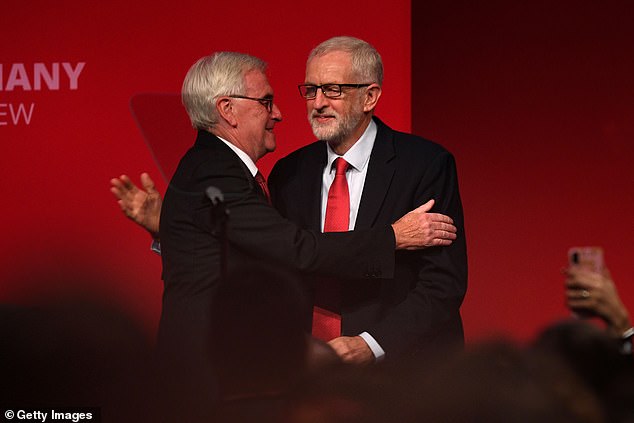 The shadow chancellor said that it was important people ‘work to live, not live to work’ as he addressed the Labour Party Conference in Brighton (pictured after his speech, with Jeremy Corbyn)

The cut in hours goes further than a report commissioned to look into the issue by Jeremy Corbyn’s party.

The shadow chancellor commissioned crossbench peer Lord Skidelsky to produce a report on how to reduce working hours without reducing pay and it has recommended the public sector shift to a 35 hour week within the next decade.

The public sector would then ‘set a norm for the whole economy’ to follow.

The report also called for the government to act as an ’employer of last resort’ in order to guarantee work to anyone who cannot find a job in the private sector.

The Tories responded by claiming the move to a four-day working week ‘could lead to wage freezes, problems at hospitals and hurt low-paid workers and small businesses’.

Meanwhile, the CBI business group cautioned against such a policy and said ‘rigid approaches feel like a step in the wrong direction’ at a time when ‘flexible working is becoming more essential than ever’.

A CBI spokesman said: ‘Businesses are clear that politicians should work with them to avoid policies that work as a soundbite but not a solution.’

The 35 hour suggestion could mean people working five shorter days a week or potentially even moving to a four-day working week.

Labour will now consider the recommendations but when pushed on whether he intended to introduce a four-day working week, the shadow chancellor said: ‘Watch this space.’

The contents of the report and Mr McDonnell’s comments suggest Labour’s next general election manifesto could be even more radical than its controversial 2017 offering.

John McDonnell today pledged to deliver ‘dignity’ to the elderly as he said a Labour government would make social care free at the point of use for all those who need it.

The shadow chancellor said making sure everyone gets the care they need would be paid for by increased taxes.

The move represents a major – and very expensive – move by Labour ahead of a potential general election before the end of the year.

The question of how to tackle the UK’s growing social care crisis has dominated domestic politics for years.

Unveiling Labour’s plan to finally answer that question, Mr McDonnell said: ‘I can announce today that, after years of campaigning by trade unions and carers – as the first building block in our new National Care Service – the next Labour government will introduce personal care free at the point of use in England.

‘Funded not through the Conservatives’ gimmicky insurance schemes. But, like the NHS and our other essentials, through general taxation.’