Labour has today vowed to force companies to put workers on their boards if Jeremy Corbyn is elected Prime Minister.

The party wants employees to be handed a third of seats on the committees so they can have a ‘real say’ in how companies are run.

The radical policy comes as it emerged that a key adviser to the Labour leader has called for a ‘Soviet Britain’ to be created and for the party to work with Communists.

Andrew Murray – who quit the Communist Party two years ago – has written a book tearing into past Labour governments and calling for the country to be ‘imbued with a fierce revolutionary spirit’.

The comments are contained in a dossier being circulated among Corbyn critics in the Labour Party, whose party conference starts in Liverpool today.

In the book, called The Communist Party of Great Britain: A Historical Analysis to 1941 and  published in 1995, Mr Murray called for the Labour party to embrace revolutionary politics.

He wrote: ‘For the Labour Party, the exclusion of the revolutionary trend in the movement paved the way for the unchallenged domination of the right wing and locked the party ever more firmly into class collaboration and reformism.

Proposals to make it easier to deselect Labour MPs could be passed by the party today amid fears the hard-left wants to purge the organisation of moderates.

And they are expected to be voted through by party delegates at their conference in Liverpool today.

Under the proposals, MPs will face open selection battles if a third of local branches or affiliated unions demand one – cutting it from the current 50 per cent threshold.

And plans to make it easier for a Corbynista to take over as leader are also expected to be passed today.

Under them, anyone wanting to stand to be leader would have to get the backing of 5 per cent of constituency parties or trade union members.

The move would hand the 500,000 Labour Party members far more power and almost certainly ensure that the left get onto the ballot.

A Labour source said: ‘The proposal agreed unanimously by the NEC reforms the existing reselection process, giving members and trade union affiliates a greater say in who represents them, but doesn’t move to automatic open selections.’

The moves come after several Labour moderate MPs have faced no confidence votes from their local parties after they spoke out against Mr Corbyn’s over anti-Semitism.

Joan Ryan, Gavin Shuker and Chris Leslie have all blamed the hard-left who have flooded into the party after they were hit by the votes.

‘In that sense, the decision to reject communist affiliation paved the way for the whole miserable litany of Labour-led disasters from 1931 to 1979.’

A Labour moderate told The Sunday Times that it is outrageous that someone with such views holds a seat at Mr Corbyn’s top table.

The MP said: ‘This is a senior adviser to Jeremy Corbyn calling every Labour government a disaster up to 1979 and he feels the same about the one that followed as well.

‘That is his attitude to the Attlee government, which created the NHS and a huge house-building programme.

‘The idea that people like this should be advising a Labour leader is frightening.’

It comes as Labour unveils a radical policy to force firms to put workers on their boards as part of a major programme to overhaul how the economy is run.

Under the left-wing plans, the worker board members would be elected by all employees and paid.

But they would also have to be members of trade unions – meaning that workers who did not pay their union subs would be banned from standing.

Under Labour’s plans, all companies with a workforce of 250 or more, whether public or private, would be required by law to reserve at least one third of places at the boardroom table for employee representatives, with a minimum of two.

Mr Corbyn said Theresa May had U-turned on her promise to put workers onto boards, watering down a pledge made in her 2016 leadership election campaign so that firms can instead nominate a non-executive director to represent employees.

The Labour leader said: ‘Workers are Britain’s real wealth creators. They deserve a seat at the table.

‘In workplaces across the country, working hours have got longer, productivity has nosedived, pay has fallen and insecurity has risen.

‘Businesses have been allowed to get away with such exploitative practices because the balance of power has shifted against workers. That has allowed a reckless corporate culture to fester which is damaging Britain’s economy.

‘Labour will turn the tide and give workers more control and a real say at work. By ensuring businesses reserve a third of board seats for workers, we’ll help transform our broken economic model, as part of our plans to rebuild Britain for the many not the few.’

He said: ‘We believe that workers on boards will help ensure that staff are valued by the business, receive a proper living wage and job security.’ 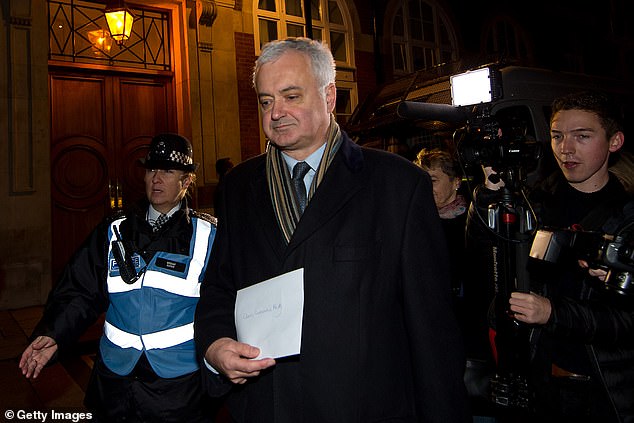 ‘Too many workers feel undervalued by their employer, a Labour Government will tackle that by giving them a proper say in how the company is run.’

The announcement forms part of an effort by Labour to use its Liverpool conference to make a direct pitch to working class communities, which it says have been held back by years of austerity and neglect.

Party sources pointed to research showing that the UK has the lowest average business investment of any G7 nation as a share of GDP.

Labour blamed governance structures which give legal priority to shareholder interests over those of other stakeholders. Mr Corbyn believes this is fuelling a short-termist corporate culture, holding back economic growth.

Mr Murray said that he has changed his views since he penned the book – but admitted that he is still a Marxist.

He said: ‘The opinions I held then are not in all respects those I hold today. I am no longer a member of the Communist Party. I am still, I hope, a Marxist.’