Labourer, 23, has 18 months to live due to a rare tumour in his brain

A labourer has 18 months to live after being diagnosed with a rare cancer in his brain formed of sperm cells usually found in testicles.

Jordan Payne, 23, from Ripley in Derbyshire, is battling a golf ball-sized brain tumour that is made of germ cells, which are usually created as a foetus grows in the womb.

They eventually become sperm or eggs, however, they can mistakenly travel to the brain or other parts of the body while the foetus is developing.

Tumours can occur if there is an abnormal grouping of germ cells anywhere in the body. They are present at birth but can go undetected for years.

Mr Payne’s rare tumour was only spotted last March when he became lethargic and struggled to remember his friends’ names – two known side effects. He has since put on weight but doctors haven’t revealed whether this is a direct complication of his tumour, or if it is down to him spending more time in hospital and being less active.

He had been working at a building site when a pipe ruptured, sending stones flying at him. One struck his helmet, but he escaped without injury.

It was only when his then-girlfriend noticed his behaviour had dramatically changed that he was encouraged to go for a CT scan.

Doctors then gave Mr Payne the devastating news he had the tumour in his pituitary gland – which controls levels of hormones in the body.

Mr Payne’s scan showed his brain had swelled up, almost covering the whole surface area of his skull.

In an attempt to rid him of the cancer, he underwent four rounds of chemotherapy, 44 of radiotherapy and six brain operations.

But last month Mr Payne, who has had to give up his construction job, was told his tumour had grown despite the gruelling treatment.

His only option is now a high-risk brain operation which could kill him, or leave him permanently blind or paralysed. 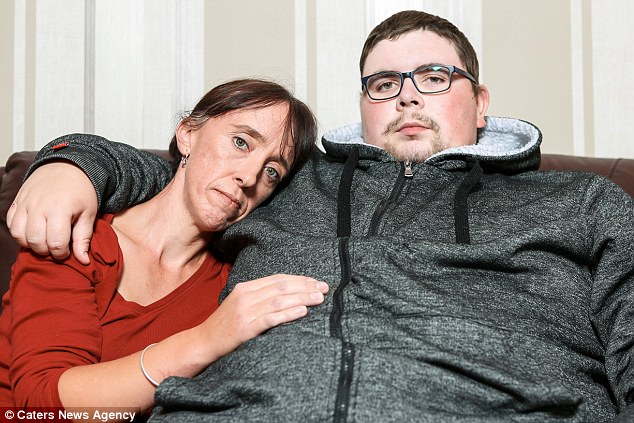 Mr Payne’s rare tumour was only spotted last March when he became lethargic and struggled to remember his friends’ names – two known side effects (pictured with his mother Ellen, 40)

WHAT IS A GERM CELL BRAIN TUMOUR?

Germ cells are created as a foetus grows in the womb. They eventually become sperm or eggs.

However, they can mistakenly travel to the brain or other parts of the body while the foetus is developing.

Tumours can occur if there is an abnormal grouping of germ cells anywhere in the body.

They are present at birth but can go undetected for years, until symptoms such as headaches, fatigue and vomiting begin.

Germ cells can also help to create hair, teeth and bone – all of which have been found in germ cell tumours before.

The most common germ cell tumour is called a teratoma, usually found on the tailbone, according to the CS Mott Children’s Hospital in Michigan.

About 45 children develop a germ cell tumour in the UK each year.

Mr Payne, who has opted to go ahead with the surgery, said: ‘I absolutely loved my job. It killed me when I found out I wasn’t going back.

‘I’ve just got to stay positive. If I don’t I’ll just break down and I’ve got to stay strong for me and my family.’

Mr Payne now suffers from short term memory loss and epilepsy and is unable to remember most of his ordeal apart from a few fragments.

The tumour has also affected his day-to-day life, with the short-term memory loss rendering him incapable of looking after himself.

Mr Payne’s mother, Ellen, 40, offered an explanation as to how her son’s cancer formed.

She said: ‘In the womb the last thing to form are the testicles. The seeds to form the testicles travel from the brain to the spine and genitals.

‘In Jordan’s case, not all of the seeds travelled from the brain and remained for years, eventually becoming cancerous.

‘When doctors told us they’d found the tumour, it was just pure shock. It was the worst day of my life.

‘If he hadn’t have had the accident at work we wouldn’t have found the brain tumour. But it’s just been horrific. It’s changed me, and it’s burned a hole in all our hearts.

Ms Payne added: ‘It’s absolutely devastated us, and we don’t have a choice, we just have to face what’s coming.

‘He’s changed a lot since the accident due to the side effects of the medicine and he’s a lot quieter than he used to be.

‘But he’s still got his amazing sense of humour. I still treat him the same which is how he wants it.’

Leah Groom, who met Mr Payne on a cancer ward, is now trying to raise money on behalf of her ‘extremely good friend’.

In a post on a GoFundMe page, she said: ‘I feel Jordan deserves some happiness in his life so I asked him to let me do this for him.

‘He is the most selfless, loving, caring boy I have ever met. Jordan is very family orientated and has a little sister named Freyja, who is only one.

‘Because he will be unable to watch her grow into a young woman, Jordan would like to raise some money so he has something to give her when she grows into an adult.

‘I think the thought alone is completely selfless. Please help me show Jordan that there is some light in this cruel world.’

Anyone wanting to donate can do so here.