The silent peer: Labour’s David Brookman claimed £50,000 in expenses last year despite never speaking in the House of Lords

A Labour peer claimed £50,000 in expenses last year despite never speaking in the House of Lords, it has emerged.

Despite racking up the huge bill for the taxpayer, he never spoke and also never asked any written questions, an investigation by the Guardian revealed. He joined the Lords in 1998.

Analysis of public data found he was among dozens of other lords and baronesses who never took part in a single debate.

Labour peer David Brookman claimed £50,000 in expenses last year despite never speaking in the House of Lords, it has emerged. The former trade union general secretary billed the public for attendance and travel every day the Lords sat

According to the figures, almost a third of the 800 peers barely participated in parliamentary business over a 12-month period despite costing almost £3.2million in allowances. The findings will reignite the debate about reforming the House of Lords.

A total of 88 peers – roughly one in nine – never spoke, held a Government post or participated in a committee at all.

According to the Guardian, Lord Brookman attended 157 days but never spoke and did not serve on a committee.

He did however regularly vote. He did not respond to a request to comment.

Steel company magnate Swraj Paul attended on 157 days and claimed more than £47,000 of allowances. He only spoke once and he also did not serve on a committee but has done so in the past. 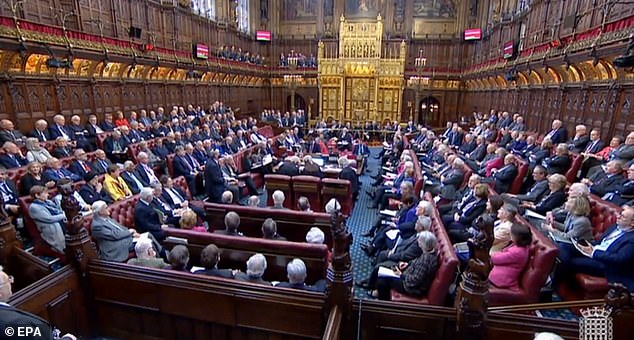 Despite racking up the huge bill for the taxpayer, he never spoke and also never asked any written questions, an investigation by the Guardian revealed. (Pictured) The House of Lords debates Brexit

Lord Paul told the newspaper: ‘I take a lot of interest in the House of Lords, but there is a lot more to be done than making speeches’. Asked for an example, he said: ‘Thinking, etc, and giving my point of view to colleagues.’

She told the newspaper the findings corroborated ‘what everyone suspects is going on’, and that a minority of peers risked discrediting the hard work of their colleagues.

She said the research ‘clearly shows there are people who are attending the House of Lords who are not contributing, and therefore they are simply redundant’.

The analysis covers claims of 785 lords serving for a full year between 2017 and 2018. It includes 244 Conservatives, 196 Labour and 97 Liberal Democrats, as well as 248 crossbench peers and various others.

The House of Lords came under scrutiny last May after it votes to thwart Brexit.

A poll by the Daily Mail at the time showed that the public agreed – with 76 per cent of voters saying they felt peers are ‘out of tune with the will of the British people’. Even more said the Lords is an ‘outdated throwback’. Peers can claim travel expenses on top of a £305-a-day living allowance just for turning up.

Their key role is to scrutinise proposed legislation. But as Brexit dominates, there has been less and less legislation on other matters for them to examine.

Currently, there are about 800 members who are eligible to take part in the work of the House of Lords. This makes it the second largest chamber in the world, and with fresh appointments after each change of government, it is set to get larger.

China is the only country with a bigger chamber.