Ms Nandy, one of five candidates in the running to replace Mr Corbyn, used a speech in central London to take aim at Labour Remainers who she accused of failing to stand up for Britain.

The Wigan MP criticised her party for paying ‘lip service’ to its internationalist history by being too focused on the EU as she tried to win over disaffected voters in Labour’s crumbling northern heartlands.

But she risked Leave voter fury as she defended free movement and suggested it could be improved and made to work better.

Meanwhile, she delivered a harsh critique of Mr Corbyn’s time as Labour leader as she claimed his response to Russian aggression was ‘completely wrong’. 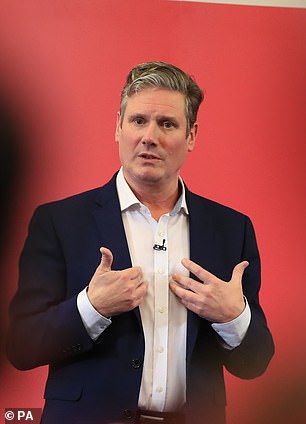 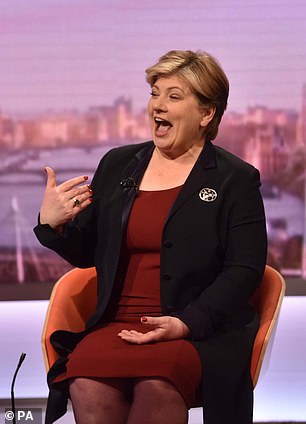 Rebecca Long-Bailey is being trolled by a supporter of leadership rival Lisa Nandy who registered a website to draw supporters to her own campaign.

Ms Nandy’s team insist that they are not behind the manoeuvre.

Analysis of the website data shows it was registered in Colorado, United States, on December 17 last year.

This was after Jeremy Cornyn had announced he would quit as Labour leader but before Ms Long-Bailey announced her run for the post.

Ms Nandy voted for Remain in 2016, but represents a Leave-supporting seat. She has been prominent in warning that efforts to stall or reverse Brexit was costing Labour support in seats like hers.

Her views appeared to be vindicated in December’s election when a swathe of seats across the Midlands and North, many of which had backed Labour since they were formed, fell to the Conservatives.

Ms Nandy said today that unless the party changes ‘Labour will die and it will deserve to’.

She said: ‘We need to up our game and challenge some of the assumptions we held in the past. We have been losing for a long time.’

However, she risked Leave voter fury as she defended EU freedom of movement – a key issue at the 2016 referendum.

She said: ‘We should have been bold enough to defend free movement and the opportunities and benefits that it brings.

‘But this would have required recognising that it has flaws and not dismissing concerns about the operation of free movement as simply racist, anti-immigration sentiment.’

She added: ‘I believe in free movement. Let me be clear about that. I have always been honest with my constituents and I will be honest with the country.

‘If it were paired with renewed and radical investment that enabled opportunities for young people… then I know those concerns about free movement would have fallen away.’

Ms Nandy said the Labour Party had effectively forgotten about it internationalist roots and in rceent years had seen foreign policy as being ‘just about being in the EU’.

‘We’ve paid lip service to our proud internationalist history but without ever explaining what that meant for the future,’ she said.

‘One of the problems with the referendum was that there was no story about our place in the world.

‘They said we were a small nation with a proud history of punching above our weight. We said, we’ll cut your mobile phone roaming charges.’

Ms Nandy said she was concerned that Labour had ‘lost our ambition and lost our boldness’ as she used her speech at the RSA to set out what her approach would be to foreign policy if she becomes the next labour leader.

She singled out Mr Corbyn for criticism as she attacked his stance on Russia, especially following the Salisbury spy poisoning.

She said it was ‘completely wrong’ that Mr Corbyn had ‘cast doubt on what happened’ and ‘call only for dialogue’.

‘At a crucial moment we hesitated in condemning an authoratarian regime,’ she said.

Ms Nandy said the current party leadership had ‘failed on Russia’ and added: ‘We stood with the Russian government and not with the people it oppresses… we failed the test of solidarity.’

The Labour leadership campaign has entered its next stage when the 48-hour window opened for the public to become registered supporters to cast their votes in the elections.

Applications opened at 5pm on Tuesday for non-members to sign up to become registered supporters to elect successors to leader Jeremy Corbyn and deputy Tom Watson.

That window to pay £25 to join members in having the chance to elect the new leadership closes at 5pm on Thursday.

Criteria include not having supported another political organisation in the last two years.

Sir Keir, Rebecca Long-Bailey, Ms Nandy, Jess Phillips and Ms Thornberry are all through to the next stage of the battle to lead the party.

They all secured enough nominations from fellow MPs and MEPs ahead of Monday’s deadline.

Now they must win the nominations of 33 local constituency parties or three Labour affiliates, including at least two trade unions, to enter the final postal ballot.

The race for Mr Corbyn’s successor was triggered when he announced his intention to stand down after leading the party to its worst general election result since 1935.

Rosena Allin-Khan, Richard Burgon, Dawn Butler, Angela Rayner and Ian Murray successfully made it to the next stage in the race to become deputy.

Hustings for the new leadership begin in Liverpool, with events planned each weekend in cities including Durham, Bristol, Cardiff, Nottingham, Glasgow and London.

There will also be hustings in the West Midlands and Bedford.