Care home residents and staff have to wait up to 21 days for Covid-19 test results, peer tells ministers

Patients and staff across Britain’s care homes are waiting weeks for Covid-19 test results and, in some cases, are not receiving results at all, peers in the House of Lords have claimed.

Labour former minister Lord Peter Hain said patients discharged from hospital were among residents facing length delays at a care home where one of his close relatives.

Liberal Democrat health spokeswoman Baroness Brinton also said of care home organisations: ‘Many are not getting any results back, a big black hole.’

Lord Hain, speaking in the House of Lords, asked why care home patients and staff, including patients recently released from hospital, are waiting up to 21 days for Covid-19 test results

She added:  ‘Those that do say 10 days is not unusual and that local resilience forums are not being allowed to get the results either – they cannot plan support.’

Lord Bethell claimed Lady Brinton ‘casts the situation unfairly’, adding: ‘There are undoubtedly cases where test results have taken longer and last weekend we had a laboratory let us down and we did have some delays last weekend.’

He went on to pay tribute to the team who turned around a ‘very difficult situation’ before insisting the majority of tests are returned within the Government’s target time.

Lord Hain later asked: ‘Why in an English care home, where a close relative of mine lives, do staff and patients – including astonishingly patients discharged from hospital – still have to wait up to 21 days for the results of their Covid-19 tests?’

Lord Bethell replied: ‘He gives powerful personal testimony, I can’t possibly argue with the details of his story.

‘But can I just reassure him that the data I have is the turnaround time for tests is in the vast majority of cases radically less than what he describes, and we’re on course for hitting the target of 48 hours for a very large number of tests and 24 hours for a lot of tests.’

Lord Bethell earlier said ‘it was not true’ that the Government’s list of priorities at the beginning of the crisis did not include care homes, telling peers: ‘In every epidemic, care homes are always a priority. 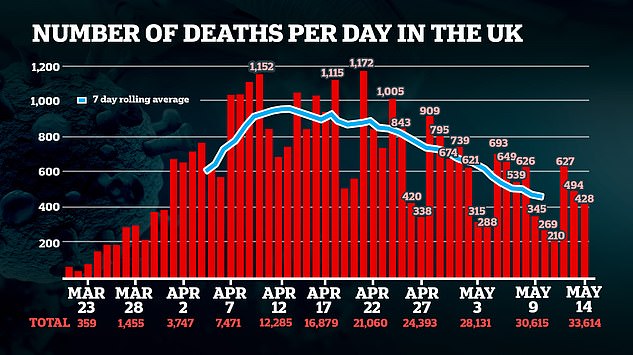 ‘History has taught us that and we knew it from the beginning.’

Care homes have become the focus of the coronavirus pandemic, with the Westminster Government coming under pressure over its approach in controlling the virus.

A total of 9,039 deaths involving Covid-19 had occurred in care homes in England and Wales up to May 1, according to data on deaths registered up to May 9 analysed by the Office for National Statistics.

Responding to a private notice question, Lord Bethell also told peers: ‘The provision of tests for care home staff and patients is a number one priority for the Department of Health and Social Care and we’re currently making 30,000 tests a day available through satellite, mobile and at-home channels.

‘We aim to have offered tests to all care home staff and residents specialising in the care of older people and those living with dementia by early June.’

Labour’s health and social care spokeswoman Baroness Wheeler said there was a ‘squabble’ between the department, Care Quality Commission and Public Health England over who is responsible for the “total and tragic chaos” in care homes, something Lord Bethell denied.

The minister said: ‘I completely acknowledge the threat of a second peak.

‘It focuses the mind and it’s very much a priority for the Government. But there is no squabble of the kind the baroness describes.”

Lord Bethell also paid tribute to the ‘many’ care homes with no infection which have ‘applied the correct disciplines and systems’, adding testing priority was for those with infection.