Labour’s £58bn plan to compensate three million pensioners is blasted as it is revealed even Theresa May would be in line for a £21,000 state handout

Labour faced a furious backlash over its £58billion promise to compensate more than three million female pensioners yesterday as economists warned it would require tax rises.

Jeremy Corbyn pledged at the weekend to reimburse the so-called ‘Waspi’ women who lost out on years of state pension payments when their retirement age was raised.

The party even provided a calculator which enables people to check how much women could be entitled to in compensation. Remarkably, it reveals that Theresa May, who was born in October 1956, would be in line for £21,910.

Yesterday, Paul Johnson, the director of the Institute for Fiscal Studies, said many of the Waspi women are ‘actually quite well off’ and that Labour has shown a ‘decisive lack of priorities’.

The pledge is on top of last week’s Labour manifesto, which unveiled proposals for huge tax rises of £83billion on business and the richest 5 per cent. The manifesto made no mention of the Waspi pledge, and Labour has not explained how it would be paid for.

He added: ‘I think there are two interesting things about that – one is the sheer scale of it, and of course it immediately breaks the promises they made in their manifesto just last week only to borrow to invest.

‘So, they would need even more than their £80billion tax rises if they wanted to cover that.

‘The other, I suppose, is just a statement of priorities or decisive lack of priorities, because there’s so much money for so many things, but they’re not finding money, for example, to reverse the welfare cuts for genuinely poor people of working wage. 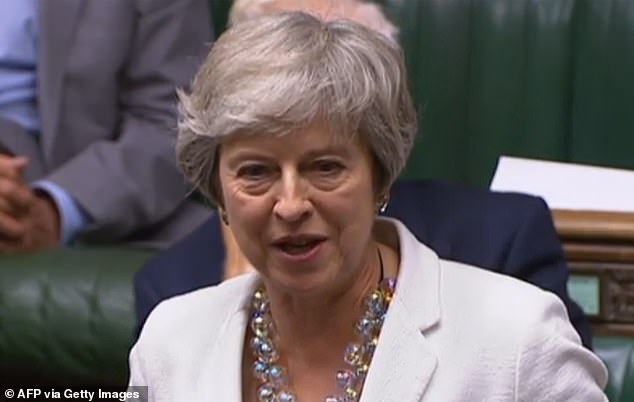 Former prime minister Theresa May speaking in the Commons last month. A Labour Party calculator revealed that under their proposals even she would get a £21,910 payout

‘Whilst some of these Waspi women really have suffered hardship as a result of not realising that this pension age increase is happening, although it was announced back in the early 1990s, many of them are actually quite well off.’

Mr Corbyn met a group of Waspi women in Renishaw, north-east Derbyshire, and told them he was ‘proud’ of the policy.

‘We owe a moral debt to these women,’ he said. ‘They were misled. They’ve lost a lot of money.

‘They are dedicated people to their communities and their families, and they’re very angry about the way they’ve been treated.’

Mr Corbyn refused to say that the pledge to the Waspi women means going against Labour’s promises on borrowing only for investment, adding ‘the government is obliged to pay’. 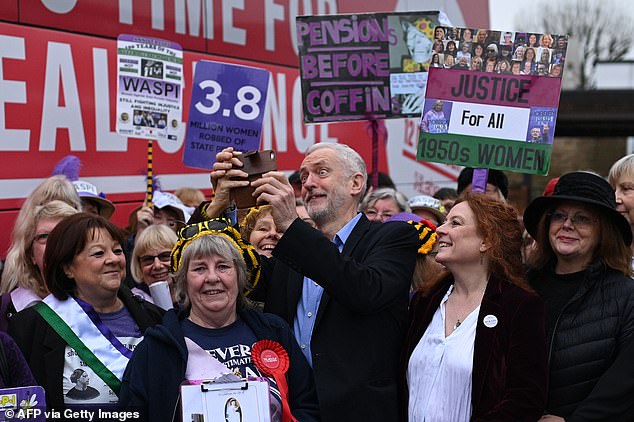 Corbyn posing for a selfie with supporters on Monday. He pledged to reimburse women who lost out on years of state pension when their retirement age was raised

Shadow housing secretary John Healey said the Waspi pledge was not fully costed in the party’s manifesto as it is ‘not a regular spending commitment’.

Women expecting to retire at 60 were told they would have to wait longer when changes to the state pension age were accelerated in 2010.

Waspi women – the Women Against State Pension Inequality – argue that they were not given enough time to prepare for the changes.

Labour has said it would make individual payments averaging £15,380 to the 3.7million women it claims were affected by the changes to the state pension age.