Labour will oppose attempts by Rishi Sunak to toughen up strike laws and will even tear up some existing laws if they take power, shadow chancellor Rachel Reeves said today.

The shadow chancellor lashed out as the Prime Minister considers new legislation banning ambulance staff from walkouts, as paramedics prepare to join nurses, rail workers, postal staff, Border Force and others on the picket line.

The Prime Minister yesterday pledged to ‘protect life and livelihoods’ amid mounting fears about the impact of a co-ordinated wave of strikes this winter.

But Ms Reeves this morning told BBC Radio 4’s Today programme Labour ‘wouldn’t be toughening up the legislation the government is talking about’.

The party has already said it would repeal the 2016 Trade Union Act if it came to power. This could make it easier for strike ballots to take place.

The shadow chancellor lashed out as the Prime Minister considers new legislation banning ambulance staff from walkouts, as paramedics prepare to join nurses, rail workers, postal staff, Border Force and others on the picket line. 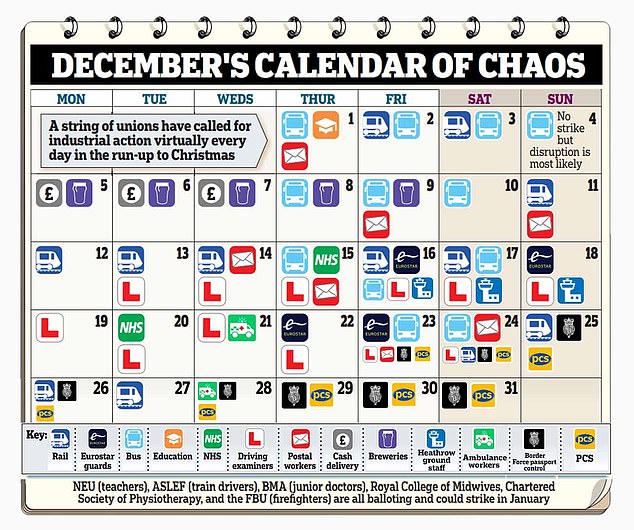 Labour will tell business leaders that the UK is at a ‘post-Brexit crossroads’ as the party pitches itself as the answer to the UK’s economic woes.

At the party’s business conference in London on Thursday, shadow chancellor Rachel Reeves will promise that Labour is ‘back in business’ as she unveils new plans to boost the UK’s start-up companies.

Speaking to a gathering of 350 business leaders in Canary Wharf, the capital’s financial hub, Ms Reeves is expected to say: ‘We are at a post-Brexit crossroads. We can go down the road of managed decline, falling behind our competitors, or we can draw on bold thinking to propel us forward.

‘That is why Labour today welcomes this radical plan to make Britain the high growth start-up hub of the world.’

Labour leader Sir Keir Starmer will also attend the conference, which will hear details of the review carried out by independent peer and former Goldman Sachs economist Lord Jim O’Neill into the UK’s start-up industry.

It recommends removing barriers to institutional investment in firms with records of high growth while also giving ‘real’ independence to the state-owned British Business Bank.

The review will also recommend the compilation of new metrics on the success of each UK university’s spin-out companies.

‘These are challenging economic times,’ Ms Reeves will say.

‘But I know the spirit of enterprise, of creativity, of endeavour, are as present in Britain today as they ever have been.’

She is expected to hail the ‘crucial insights’ contained in the report, which will go towards ‘achieving one of the guiding ambitions of the next Labour government – to make Britain the best place to start, and to grow, a business.

‘And it sends a powerful message: that Labour is back in business,’ the shadow chancellor will add.

Lord O’Neill, whose review drew on consultation with entrepreneurs, investors, and policy-makers, said: ‘The more all political parties support the ecosystem of start-ups for the UK, the more they become entwined in the DNA of policy thinking for the future.

‘Leading this review has underlined the huge potential Britain’s start-ups have for changing our economic fortunes, especially in towns and cities outside of London.’

‘When we were in government for 13 years we didn’t have this sort of industrial action,’ Ms Reeves said.

‘This is happening because the Conservative government is failing to treat, with respect and dignity, the working people who kept our economy going during the Covid pandemic, who are now being left out to dry by the Conservative Government that doesn’t respect the contribution they made to our society and to our economy.

‘We don’t support new legislation to make it harder to take industrial action, that stops people from withdrawing their labour.

‘What we would be doing in government is not messing around with those laws but getting round the table and resolving these disputes, because that is what people who rely on public services, who reply on our trains, desperately need right now.’

A thousand Border Force passport staff at five major airports last night became the latest public sector workers to walk out and ruin the festive plans of millions of Britons.

The Public and Commercial Services (PCS) Union said arrivals staff at Heathrow, Gatwick, Birmingham, Manchester and Glasgow will strike from December 23 – 26 and December 28.

And the RMT union warned that a resolution to the ongoing rail dispute is ‘further away’ following Government intervention, as it confirmed that planned strikes by tens of thousands of railway workers later this month and in early January would go ahead.

Rail unions have already said they will wreak havoc on the train network over Christmas, while postal staff will join picket lines instead of delivering last-minute presents and cards.

And NHS nurses and paramedics are also due to walk out for several days, with fears that soldiers will have to be drafted in to cover gaps in care.

A strike ban already applies to the police and armed forces but does not cover blue light services such as firemen – who are also balloting for a strike over pay – and ambulance staff.

Another anti-strike option for the Government would be to amend the Civil Contingencies Act to allow ministers to ban strikes that threaten to trigger a national emergency.

Ministers are also looking at options for limiting the power of militant unions to call out their members.

The Government is already committed to introducing ‘minimum service levels’ in the transport sector. This means union leaders would be forced to ensure a certain number of services run during walkouts to limit their impact. Ministers are looking at expanding the legislation to other sectors.

But they are facing pressure to explain why the legislation, promised in the Tories’ 2019 manifesto, has still not begun its passage through Parliament.

Downing Street has declined to provide a timeline or any details on the new laws Mr Sunak invoked.

Quizzed last night as to whether Britain would end up gridlocked over the festive period, the Prime Minister vowed he would not be offering unions more money to solve the various pay disputes. 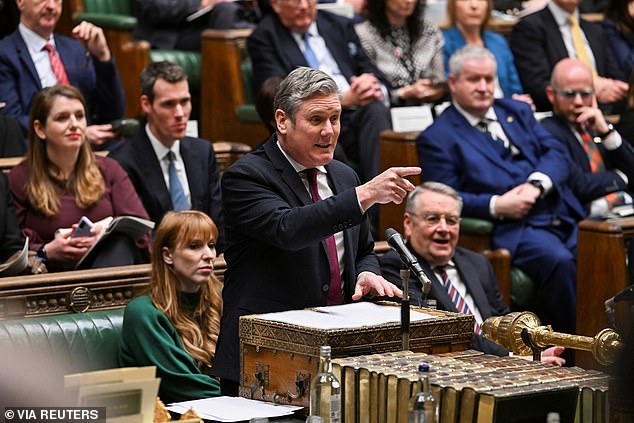 Sir Keir Starmer has already said it would repeal the 2016 Trade Union Act if it came to power. This could make it easier for strike ballots to take place by allowing online votes.

Mr Sunak insisted the Government had approached pay rows with ‘the spirit of reasonableness’ and accepted the recommendations of independent public sector pay bodies.

He told ITV News: ‘In each case, the Government has accepted those recommendations in full even where in some cases those pay recommendations are higher than the pay increases people are receiving in the private sector.

‘Many people watching will not be seeing their wages going up that much.

‘The Government accepted them in the spirit of reasonableness and if union leaders are not going to be reasonable, then my priority is always going to be to protect people’s safety and to minimise disruption on their day-to-day lives.

‘I will do whatever I need to do to ensure that that’s what we can make happen.’

Military top brass have reportedly told ministers it is ‘not right’ for soldiers, who are banned from striking, to fill in for roles over the festive period.

It comes as Mr Sunak accused union chiefs of making unreasonable pay demands and said he had a ‘duty to take action’ to protect the public.

Army bosses fear the plans for hundreds of soldiers to fulfill paramedic roles could harm the military’s ‘operational capability’.

A source told the Telegraph: ‘You’ve only got to look at a private soldier on £22,000 a year and whose pay scales have not kept up with inflation for the last decade, having to give up Christmas, or come straight off operations, to cover for people who want 19 percent [salary increases] and are already paid in excess of what he or she would be, and it’s just not right.

The Education Secretary insisted today the Government is approaching unions’ pay demands in a ‘fair and balanced way’ as she urged the country to ‘pull together’ in the face of ongoing strikes.

Asked if the country is on the verge of a general strike, Gillian Keegan told Sky News: ‘The reality is we have a number of people who are striking and it’s really disappointing.

‘We have to pull together as a country. We’ve been through an awful lot…

‘All we can do is try to react to them in a fair and balanced way.’