Here’s looking at you, chicks! Pet Labrador gets up-close view of his baby partridge best buddies – as she balances them on her NOSE

A pet labrador became ‘obsessed’ with a group of partridge chicks after they were separated from their mother.

Five-year-old Ruby became best-friends with a bundle of partridges and took up chick-sitting after her owner rescued the birds in Norfolk.

After meeting the little chicks, Ruby immediately became ‘obsessed’ with them and an incredibly unlikely friendship began.

A hilarious video, posted on Instagram by Ruby’s owner Jadene Moloy, shows the labrador happily balancing the little birds on her head. 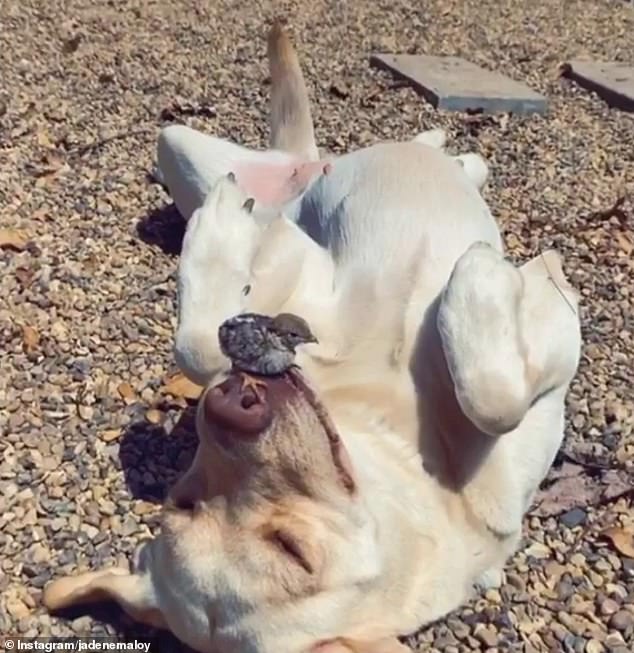 Surprisingly, the little birds were not afraid of Ruby and fearlessly hopped on top of the nose of their chick-sitter

Surprisingly, the chicks are not afraid of the labrador and fearlessly hop on top of her nose.

One of the partridges even perches on the labrador’s lips, much to the friendly pooch’s delight.

Farm worker Jadene Moloy, 23, found the helpless chicks after they had become separated from their mother on June 15.

She put them in a box and took them indoors, to keep them safe from predators, on her farm in Thetford, Norfolk.

Her dog Ruby’s love for new friends then blossomed, as the labrador even helped with chick-care duties for the little birds.

Jadene said Ruby started getting inside the box with the chicks, who snuggled up to the friendly dog for warmth.

She said: ‘Whilst carrying out my usual work duties I came across some partridge chicks that had been separated from their mother.

I boxed them up and took them back to our tea hut where Ruby met and fell in love with them.’ 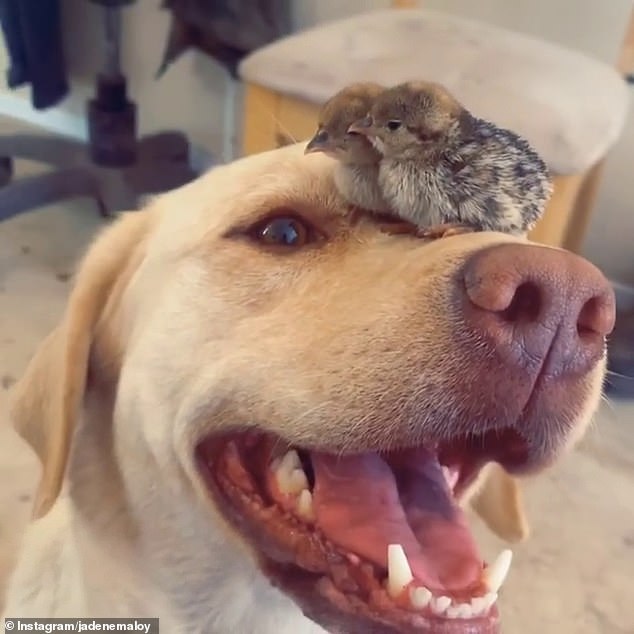 Farm worker Jadene Moloy, 23, found the partridge chicks after they had become separated from their mother on June 15 and took them indoors, when they became friends with her dog Ruby (above) 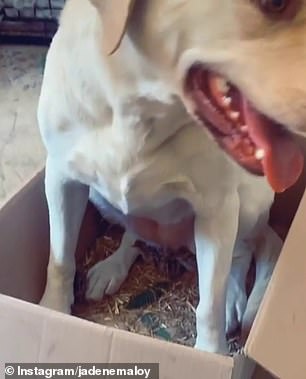 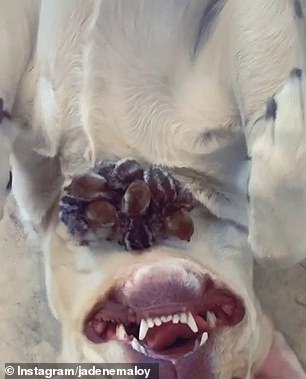 Ruby even helped Jadene with chick-care duties, cuddling the partridges (right) and getting into the box with the birds (left), as they kept close to her to stay warm

Jadene was not worried about the chicks’s safety, as she said the labrador has ‘such a lovely nature’.

She said: ‘Ruby is the biggest bundle of joy, she’s so full of energy and always wags her tail so much that her whole-body waggles too.

‘She always has the biggest grin on her face. And she’s not just a dog she’s my best friend. Wherever I go she’s right there beside me. I cannot imagine life without her.’

It is not the first time the pooch has made unusual friends, as she joined Jadene’s horses in their stables, seemingly unafraid by other animals.

Jadene later found the partridge mother and was able to reunite the chicks with her – meaning Ruby had to say farewell to her little furry friends.

Ruby has been with Jadene since she was just eight weeks old and is extremely well trained.