A devoted dog ‘distraught’ to see his favourite toy in the washing machine was caught on camera trying to rescue it.

Footage shows loyal pooch Hugo keeping vigil in front of the machine before taking matters into his own paws and trying to chew the catch to release his beloved squeaky toy Mr Bunny.

Owner Ursula Aitchison, 30, from Balham, south west London, was stunned when she spotted the five-year-old golden retriever sitting forlornly watching the toy rabbit in the drum on Monday evening.

In between bouts of chewing the handle he can be seen flashing photographer Ms Aitchison pleading ‘puppy eye’ looks and eventually had to be bribed into another room with ham to protect the machine. 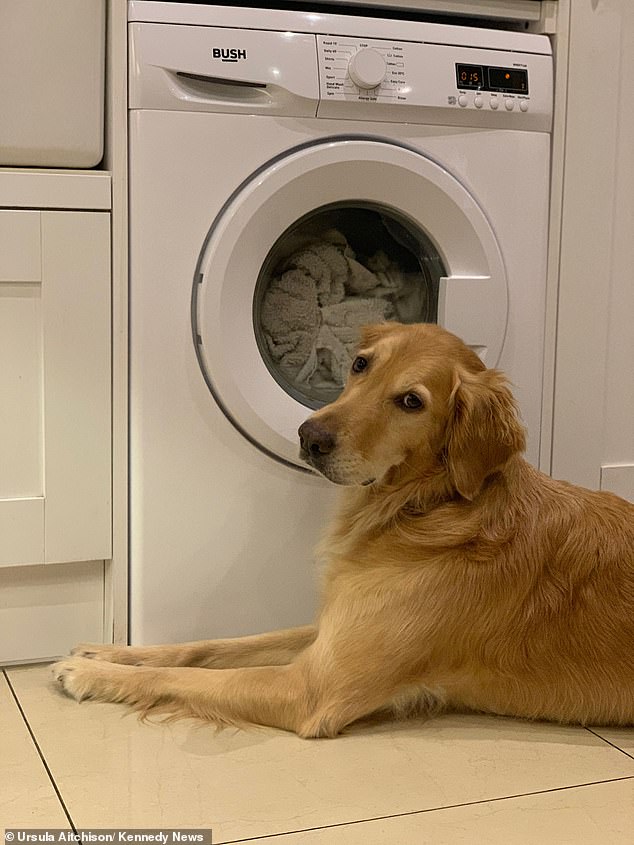 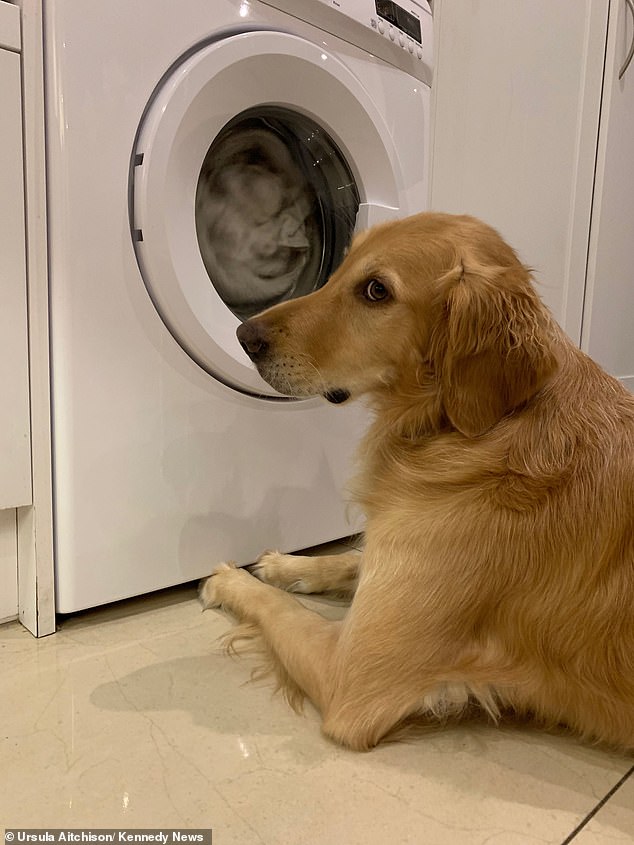 The mother-of-one said it was great seeing Hugo’s affectionate side come out during their reunion, and believes he’s subliminally preparing for the arrival of a new golden retriever puppy next month.

Ms Aitchison said: ‘Mr Bunny was looking a bit grubby so I decided to put it in the washing machine and just shoved it in with a load of other things.

‘He saw me put it in and went to get it back out of the machine so I had to shut the door and quickly put the wash on – he looked distraught.

‘It was so funny watching him lying next to it on a pile of washing ready to go in the machine.

‘I got a couple of shots of him giving me upset ‘puppy eyes’ then a couple of him leaning his head on the washing machine watching it. 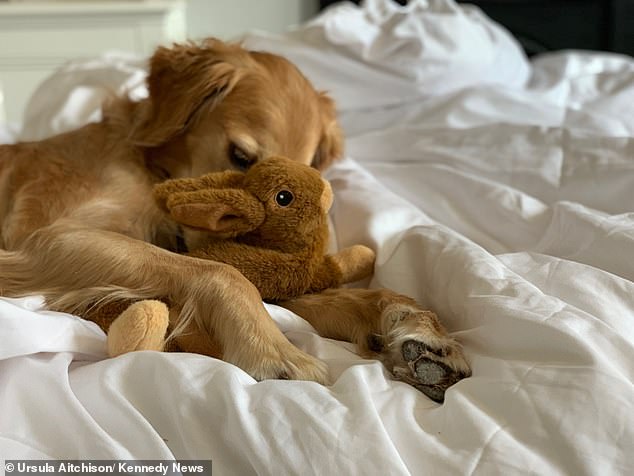 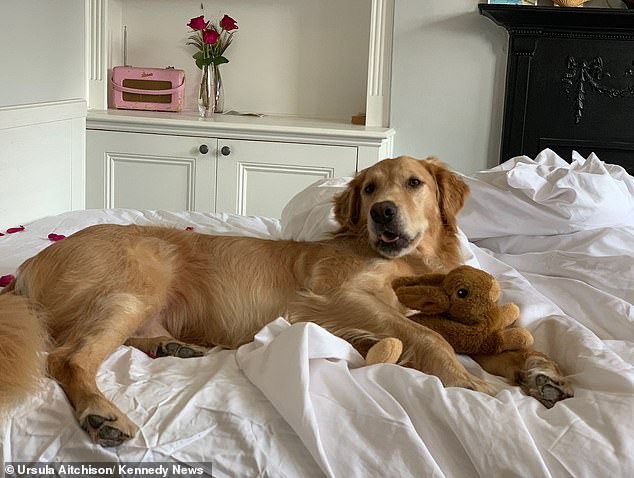 ‘He then tapped the glass and then tried to pull it by biting it open. I had to stop him because I was worried he was going to rip the door off as he didn’t look like he was going to stop.

‘I had to distract him with ham to get him into the hallway.

‘Once he was away from the washing machine it was like ‘out of sight, out of mind’ and he calmed down.’

Ms Aitchison said that Hugo’s whirlwind bromance with the squeaky toy took her by surprise, believing her beloved pooch was disinterested in toys.

However a chance encounter at a pet store brought the two together and they have not been parted since – until Mr Bunny’s date with the washing machine.

Ms Aitchison said: ‘I didn’t think he was a ‘toy’ dog as he’s never been a chewer.

‘I got it for him three weeks ago and now he takes it everywhere with him. I didn’t know he liked them and now I feel really bad.

‘I was buying a new bed for him at the pet shop and I thought I’d grab a toy for him because there were real rabbits in there and he was eyeing them up as we walked up and down the aisles.

‘He wouldn’t have ended up cuddling them so I thought I’d get him a squeaky one. 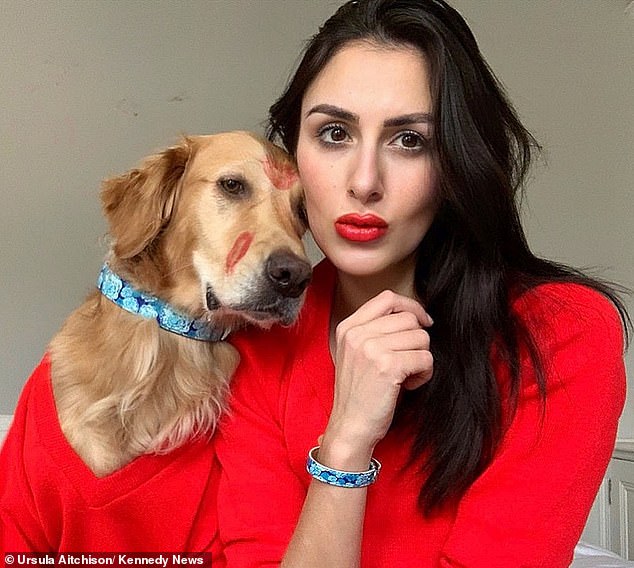 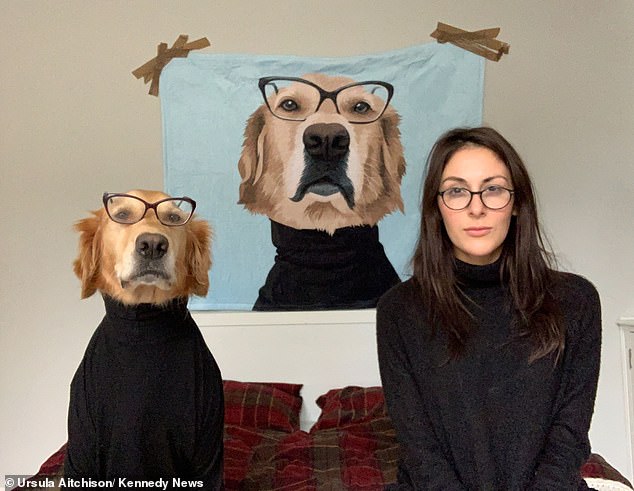 ‘The minute I picked it up in the shop he carried it and then took it to the till with him – it was love at first sight.

‘He’s very gentle with it so it’s still intact. He squeaks it and licks it but hasn’t ripped it apart, it’s either made really well or he doesn’t want to hurt it.’

On Tuesday afternoon the pair were reunited when Ms Aitchison left the washing machine door ajar to allow Hugo to greet him.

Ms Aitchison said: ‘Hugo’s got an incredible sense of smell, he dives over fences to get tennis balls he didn’t know existed, so I was curious how much of the smell had washed out and how much that would bother him.

‘When he put his head in the machine it looked like he was smelling it and then licking it to put his scent back on it like when a mum licks her pups.

‘He was doing that for a good 15 minutes in the kitchen and then he brought him through to my bed and lay there for a bit.

‘It was so sweet to see them together, I’ve never seen him be that affectionate apart from with me.

‘He doesn’t lick people but he does cuddle them.

‘It’s weird he’s being so loving towards something, it’s like he knows on some level that he’s going to be a big brother when we get the puppy.’

Since their brief time apart Hugo has made sure Mr Bunny is in sight at all times.

Ms Aitchison added: ‘Hugo has been carrying him around all the time since he came out of the washing machine and keeps looking at me as if it say ”don’t get any ideas”.’