There has been a massive spike in the number of infants prescribed special formula, which is often far more sugary than milk-based products.

Experts said the problem is there are much higher rates of children being diagnosed with a milk allergy than would be expected.

They warned the rise in special formula use could promote obesity and tooth decay in young children.

Rates in England are twelve-fold higher than what would be expected for the number of children with milk allergies, they found.

Prescribed amounts of specialised formula for infants rose three-fold in England from 2007-2018, with similar trends in other regions of the UK, they discovered.

Co-author Dr Robert Boyle, from Imperial, claimed the rise may have been caused by ‘formula industry marketing’.

There has been a massive spike in the number of infants prescribed special, dairy-free formula which is often far more sugary than milk-based products (file image) 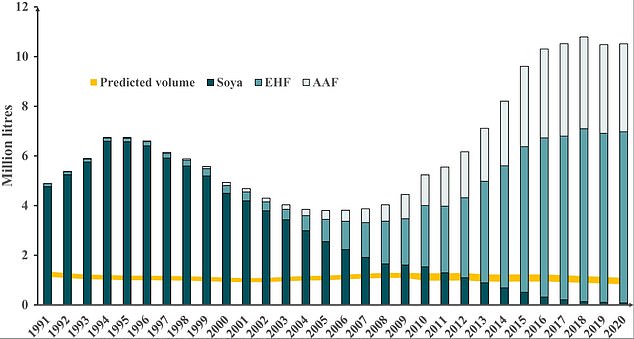 Imperial College London researchers found newborns drank nearly 11million litres of expensive formulas in England in 2018. The figure was 2.8 times more than the less than 4million litres prescribed to children aged under one in 2007, they found in a study

WHY IS BREAST BEST, ACCORDING TO EXPERTS?

Mothers are urged to breastfeed, if possible, in order to give their infants the maximum dose of nutrients.

Bottle-feeding can be costly for many parents struggling to cope with the financial burden of a new baby.

Formula milk also has varying levels of nutrients, decided by the provider.

And it is often not easy for babies to digest.

However, babies who consume both breast milk and formula may not get enough vitamin D and still need drops or mothers who take supplements.

Many women who breastfeed incorrectly believe that this gives babies all the nutrients they need, said Dr. Carol Wagner of the Medical University of South Carolina in Charleston.

More than a quarter of under fives are overweight or obese in the UK — rising to four in ten eleven year olds. Around one-in-four five year-olds already have cavities.

Cow’s milk allergy is estimated to affect up to one per cent of under-twos.

Specialised products have been developed as alternatives to formula containing powdered milk.

The study, published in Clinical and Experimental Allergy in May, tracked national prescription data in England from 1991 to 2020 for babies in all three countries.

Researchers modelled the expected prescription rate based on assuming one per cent of all under-ones each year would require the formula.

This was compared to the actual prescription numbers across three different types of formula: soya, extensively hydrolysed formula and amino acid formula.

Total prescriptions soared 2.8-fold in England from 2007 to 2018 — with similar trends in other regions of the UK.

Amino acid formulas — which are of particular concern due to higher sugar levels — soared by 6.7 per cent in the country.

‘Unnecessary specialised formula use may make a significant contribution to free sugars consumption in young children.’

Dr Boyle claimed the over-diagnosis ‘appears to have been fuelled by formula industry marketing activities’.

Mother’s milk contains nutrients that protect babies against infections — and even cot death. It also reduces their risk of heart disease later in life.

Dr Boyle said: ‘While specialised formula is reasonably well tolerated by most infants, and supports nutrition and growth, there are significant differences from standard formula or human breast milk.

‘In specialised formula products, the lactose naturally present in breastmilk or cow’s milk is partially or completely replaced by alternative carbohydrate sources, often free sugars such as glucose or sucrose.

‘High free sugars intake is an important risk factor for obesity and dental decay and a major public health issue.

‘Thus, it’s conceivable unnecessary use of specialised formula may have important public health consequences that have not been studied to date.’