A ‘laddish’ project manager who lost his job after his boss became fed up with antics that included performing stunts in a client’s car has won more than £2,000 in an unfair dismissal case.

Daniel Canneaux, 31, was caught driving the vehicle over makeshift jumps and through a wall of tyres, an employment tribunal heard.

The hearing was told Mr Canneaux had also put a model of a penis on a female colleague’s desk, as well as drawing one on her car.

After the company was told to make cuts, with Mr Toms finding Mr Canneaux had not finished his work having been furloughed, he made him redundant after more than four years at the firm.

But Mr Canneaux successfully sued the company after a panel found he was treated ‘very poorly’, with Mr Toms’ frustration only partly resting on the issue with work completion while furloughed.

Laddish’ project manager Daniel Canneaux, 31, who lost his job after his boss became fed up with antics that allegedly included performing stunts in a client’s car has won more than £2,000 in an unfair dismissal case

In 2016 Mr Canneaux began working as a project manager at Land Science, which provides testing and advice on ground engineering and contaminated land projects.

It is based in the town of Burgess Hill, West Sussex.

The hearing held in South London was told Mr Toms had a ‘longstanding dissatisfaction’ with Mr Canneaux because he had a habit of inappropriate behaviour.

The panel heard that in the same year he got the job, Mr Canneaux had performed stunts with a colleague in an old car, which was due to be scrapped, on a client’s premises.

Mr Canneaux had driven the motor, which belonged to the unnamed client, over a makeshift ramp at speeds and through a wall of tyres that was higher and wider than the car itself, the tribunal was told.

Mr Canneaux also had a bad attitude at work and sometimes called colleagues ‘retards’ and ‘fat’, the panel heard.

The tribunal also heard he was ‘laddish’ in the office, after he left a model penis on a female colleague’s desk and drew a penis on her car.

The hearing was told: ‘He and her had a very good relationship within which this kind of behaviour was mutually regarded as funny. 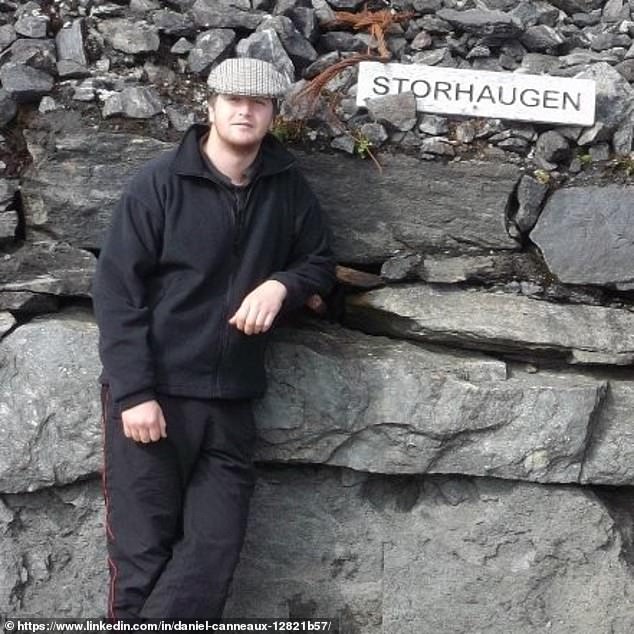 ‘However, it is the type of behaviour that might have offended others, including but not limited to female staff.

‘There is no specific evidence whether it did not but plainly it is something that management could legitimately be concerned about.’

The panel also heard he once brought into work a bullet he had found.

In February 2020, Mr Canneaux was brought in for a disciplinary meeting due to poor work and missed deadlines with his performance being the lowest of the project managers.

As the pandemic hit the UK in March 2020, Mr Toms was told to cut the business’ staff costs and employees were asked to work from home as the country was plunged into lockdown.

Staff were told to complete timesheets and were reminded that working from home was not a holiday.

But the panel heard Mr Canneaux had not completed work he was supposed to have done before going on furlough.

He also did not fill out timesheets and had taken a company pressure washer without permission.

He was then suspended by Mr Toms in June for allegedly abusing homeworking protocols and misusing company property, before being sent a report of the disciplinary investigation.

Mr Canneaux was invited to a disciplinary hearing – where his committing gross misconduct was mentioned – on June 29, but six days before that, he was made redundant, the panel heard.

The tribunal was told: ‘The letter stated that his overall performance, commitment to the business and disciplinary record had been taken into account.. No right of appeal was offered.’

The freelance engineer successfully sued the company, with Employment Judge Daniel Dyal concluding he had ‘no hesitation’ in finding the dismissal unfair.

Judge Dyal said: ‘In my view, part (not all) of Mr Toms’ frustration relates to the fact [Mr Canneaux] did not do any further work once he had been furloughed.

‘Although it is true that [Land Science Limited] had opened a disciplinary investigation into [Mr Canneaux] and was using the language of gross misconduct among other things to describe it, in my view this was essentially about leverage.

‘It wanted to put [him] in a position where taking redundancy seemed like a good option. That would make it more likely for him to go quietly…

‘There were elements of blameworthy conduct in his past behaviour in the workplace… The procedure adopted to secure his dismissal was devoid of any semblance of procedural fairness.’