Stephen Hawking was a genius who solved mind-boggling problems about space and time but openly admitted that women were the most puzzling thing about the universe.

Professor Hawking said the opposite sex had been a ‘complete mystery’ he struggled to solve during his distinguished life.

The twice-married academic’s Isobelle said as a young man her son enjoyed parties and always ‘liked pretty girls – only pretty ones’. 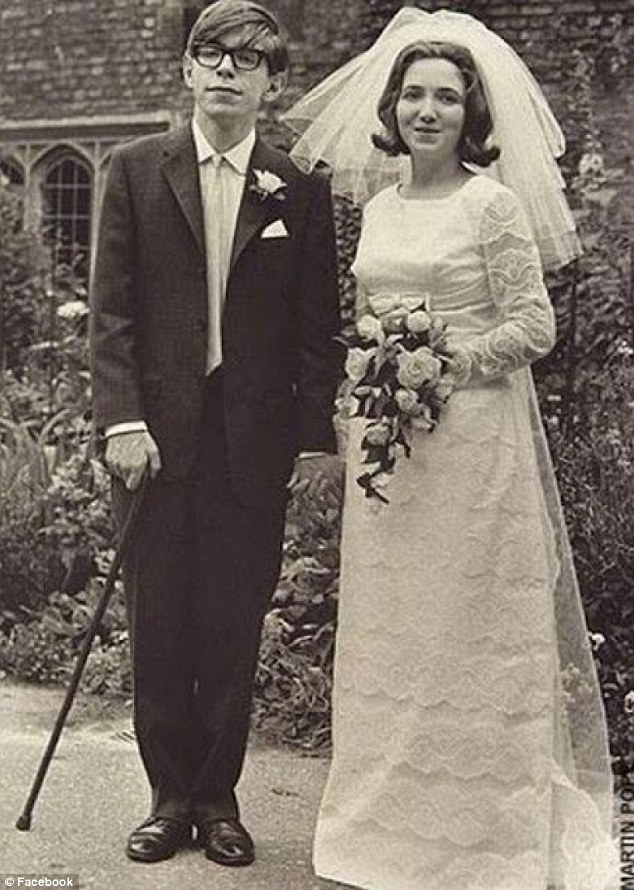 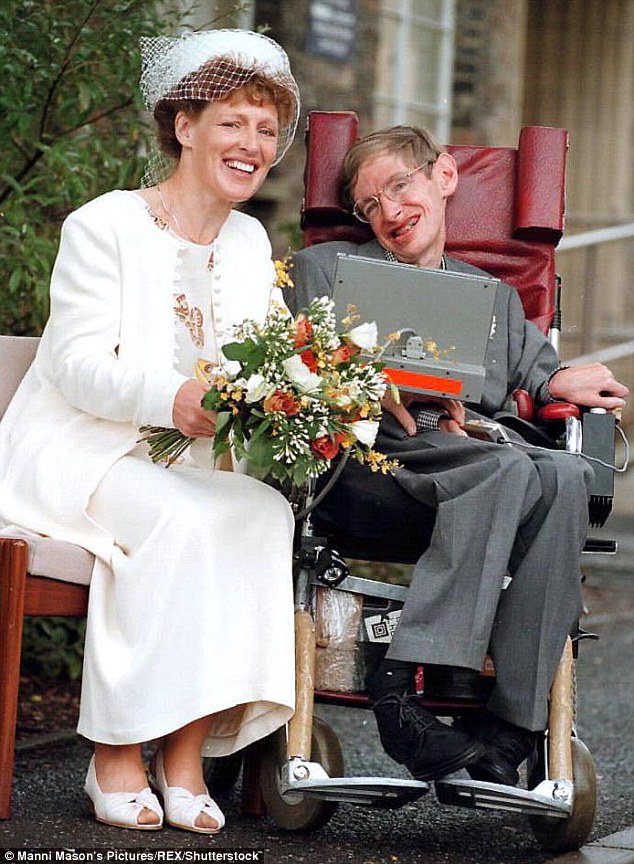 For many years he also had a poster of his favourite pin-up Marilyn Monroe on his bathroom door and at his 60th birthday party an impersonator was booked to sing ‘I Want to Be Loved by You’ and cancan girls reportedly draped themselves over his chair.

Elaine Hawking’s second wife (pictured right together today described him as ‘love of her life’ and said he had proposed twice since they split up 12 years ago.

Speaking from her home in Chipping Camden, Gloucestershire, this morning, Elaine Hawking, 68, said: ‘His death was a relief for him, I believe.

‘He proposed to me twice after our divorce because he couldn’t quite cope with it, but I said to him ‘what has changed Stephen?’.

‘He was an amazing man. Of course he was a wonderful man, who was very, very special.

‘I am still reeling, really I am really upset.

‘I know his first wife likes to put me down, but we had 22 years together which was wonderful.

‘For us our marriage was loving. People didn’t like it and they tour us apart.

‘It is too personal, I can’t give a public tribute because our life was a private one and we had 22 years together. It is all too personal for me right now.’

Eddie Redmayne, who played him in the Oscar-winning biopic The Theory Of Everything, described him as ‘a ladies’ man’ with a ‘kind of shabby and cool sex appeal’.

American television and radio host Larry King said today the academic was ‘inspirational, always optimistic and had a wicked sense of humour’, adding: ‘I once asked what puzzles him the most in all the universe. ‘Women’, he answered’.

The Cambridge professor married his first love Jane two years after his devastating motor neurone disease diagnosis in 1963 and she would care for him for decades.

They met at the University of Cambridge where she was studying modern languages.

But they divorced in 1991 in an acrimonious split that strained his relationship with their children Lucy, Robert and Tim.

Professor Hawking then married his nurse Elaine Mason in 1995 at a ceremony not attended by his first wife and children.

They divorced in 2006 – two years after nurses looking after the scientist reported their suspicions to police that Mrs Hawking was physically and emotionally abusing her husband.

No charges were ever brought and Professor Hawking always denied he had been attacked.

Hawking married Jane Wilde in 1965 and they had three children, Robert, Lucy and Timothy.

Jane cared for Hawking for 20 years, until a grant from the United States paid for the 24-hour care he required.

But Hawking then divorced Jane in 1991.

Writing in her autobiographical ‘Music to Move the Stars,’ she said the strain of caring for Hawking for nearly three decades had left her feeling like ‘a brittle, empty shell.’ 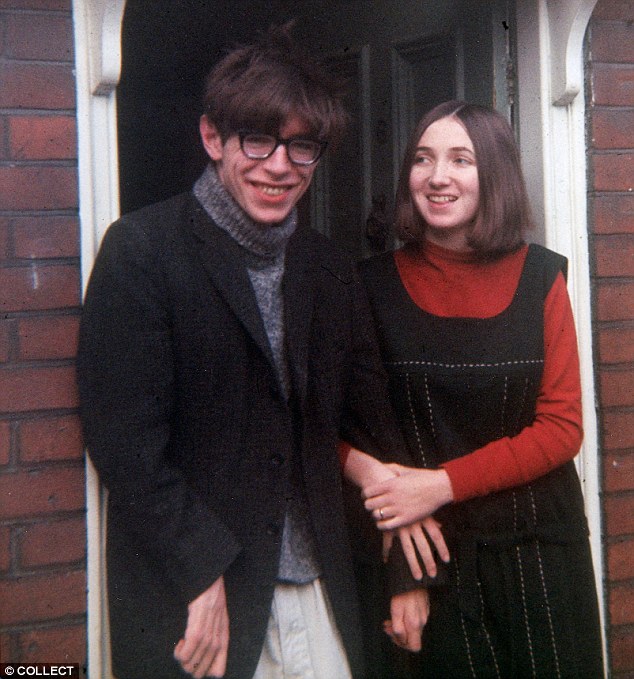 Jane and Stephen Hawking (pictured together in 1962) met through mutual friends at a party in 1962. The next year Hawking was diagnosed with amyotrophic lateral sclerosis. Even aware of his consequent shortened life expectancy and limitations, the couple became engaged in 1964 and married in 1965 in their shared hometown of St. Albans 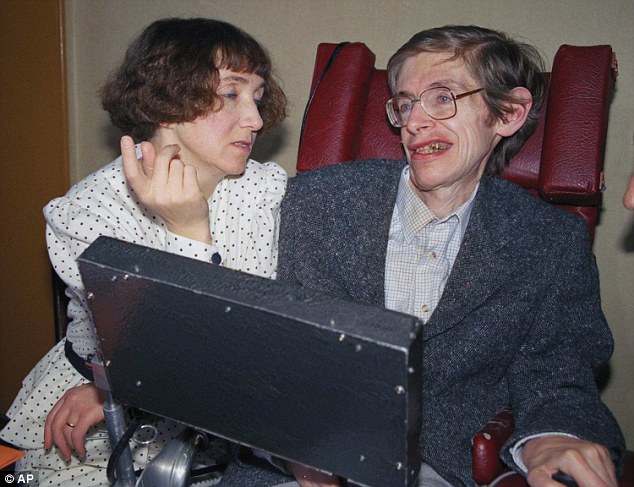 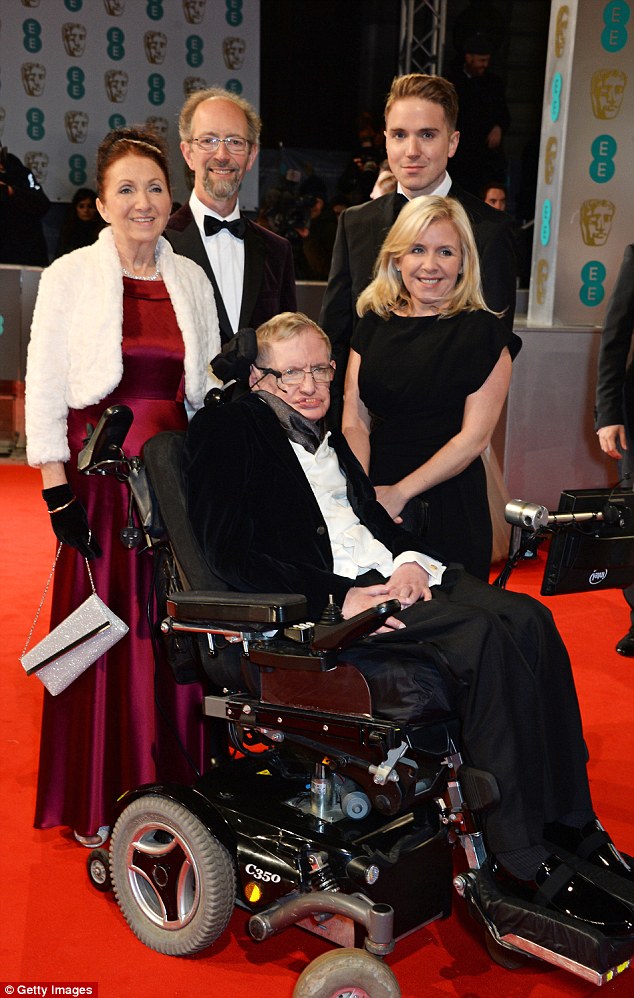 Hawking married his one-time nurse Elaine Mason four years later, but the relationship was dogged by rumours of abuse.

Police investigated in 2004 after newspapers reported that he’d been beaten, suffering injuries including a broken wrist, gashes to the face and a cut lip, and was left stranded in his garden on the hottest day of the year.

Hawking called the charges ‘completely false.’ Police found no evidence of any abuse and Elaine never faced any charges.

In 2004 it was alleged that she called her disabled ex-husband a cripple, bathed him in water that was too hot and allowed him to wet himselfd.

A different nurse was reported as saying: ‘She gets angry and has thrown him on the bed where he kicks his limbs or hurts himself. She allowed him to slip down low in the bath so the water goes in the hole in his throat.

‘She has left him in the garden without his computer mouse so he cannot talk and call for anyone. She gives him lots of verbal abuse and calls him a cripple and an invalid, which depresses him.

‘She would withhold the bottle he used to go to the toilet so he wet himself, which he does not like because he is a very dignified person and a very private person. The verbal abuse is unbelievable. Her mouth is like a sewer. We (his nurses) got so used to it we forgot it was not normal behaviour.

‘She throws things around the kitchen to frighten people and has temper tantrums.

‘During one visit to hospital she was asked to leave because she was throwing things around.’ 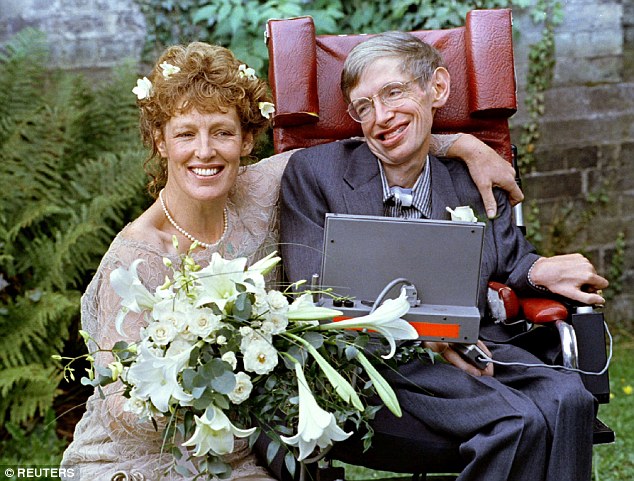 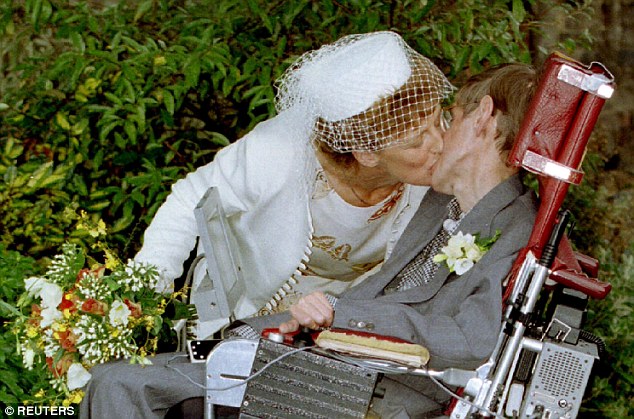 A kiss for scientist and theorist Stephen Hawking from his new bride Elaine Mason after their civil wedding September 15, 1995 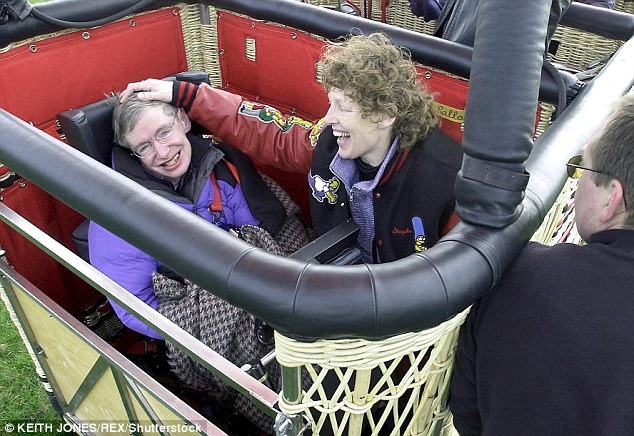 The nurse, who spoke to The Times on condition of anonymity, is one of ten former carers of Professor Hawking said to have been interviewed by police investigating claims of assault against him at the time.

Professor Hawking’s son by his first wife Jane said at the time he felt certain his stepmother was behind a string of alleged assaults on the academic.

He added: ‘I believe quite strongly that it’s true, based on what I have been privy to in the past.

‘It makes me feel sick, as I’m sure anyone would be in my position. I feel completely helpless. He denies it every time I speak to him and I would hope he would respect me enough to tell me the truth.’

Tim’s mother Jane said: ‘The situation is far worse than any of us imagined.’

Lucy Hawking said her father had an exasperating ‘inability to accept that there is anything he cannot do.’

‘I accept that there are some things I can’t do,’ he told The Associated Press in 1997. ‘But they are mostly things I don’t particularly want to do anyway.’

Then, grinning widely, he added, ‘I seem to manage to do anything that I really want.’