Lady Amelia and Lady Eliza Spencer, 29, pile on the glamour at Dior event in Dusseldorf

Princess Diana’s nieces Lady Amelia and Lady Eliza Spencer piled on the glamour as they attended a Dior event in Dusseldorf earlier today.

The stunning twins, both 29, who grew up in South Africa, took to the pink carpet of the Miss Dior pop-up launch event for Dior’s new Miss Dior Eau de Parfum, both turning heads in their elegant gowns.

Lady Amelia, who recently moved from Cape Town to London with her fiance Greg Mallett, looked chic in a monochrome gold gown with red heels, while Lady Eliza opted for a coordinated gold and red ensemble.

It is far from the first high profile event the blonde duo, who are daughters of Earl Spencer and first cousins of Princes William and Harry, have attended in recent weeks.

Princess Diana ‘s nieces Lady Amelia and Lady Eliza Spencer, both 29, piled on the glamour as they attended a Dior event in Dusseldorf earlier today

The pair joined their sister Lady Kitty at their first ever London Fashion Week at the weekend.

Sisters Lady Kitty, Amelia and Eliza Spencer proved that their trio can pose up a storm as they arrived for the Perfect Magazine and NoMad London Fashion Week party on Sunday.

The blonde beauties aligned their fashion senses for the glamorous evening as they joined forces to celebrate Perfect Issue One, Joy, and the official launch of NoMad, London.

And earlier this month they attended the 78th Venice Film Festival, turning heads in their elegant floor-length Alberta Ferretti gowns. 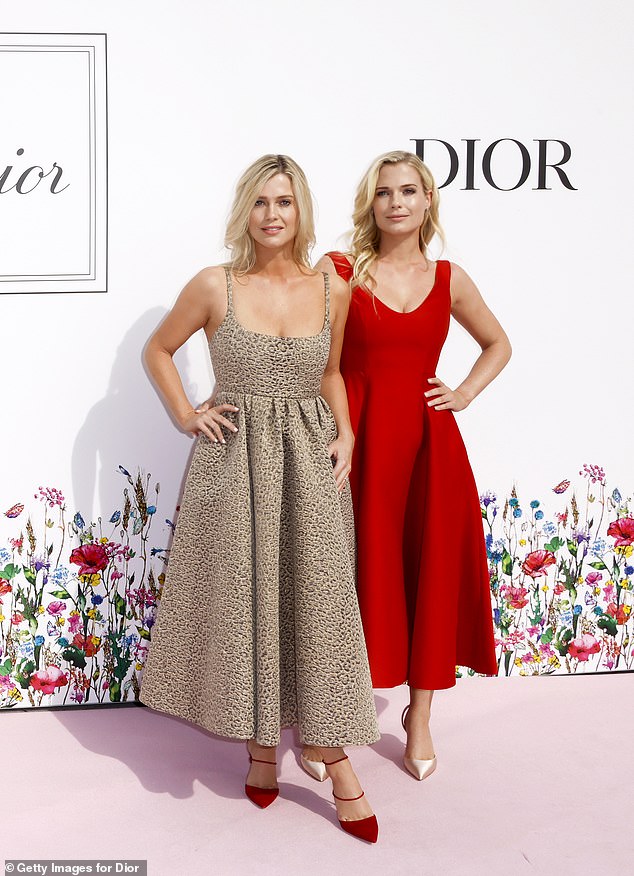 The stunning twins, took to the pink carpet of he Miss Dior pop-up launch event for Dior’s new Miss Dior Eau de Parfum, both turning heads in their elegant gowns

Amelia and Eliza, who are both signed to Storm Model Management, are looking forward to fulfilling long-held ambitions now they’re both living 20 minutes apart in London.

Amelia hopes to become a wedding planner and Eliza dreams of being an interior designer.

They grew up with their father and mother Victoria Aitken in Constantia but spent significant time in the UK after their parents split and Charles moved back to the family’s seat, Althorp. Lady Eliza, who dreams of being an interior designer, looked chic in a monochrome red gown with gold heels which coordinated with her sister’s outfit

Earlier this year, the pair were hailed by society bible Tatler as among the hottest and most elegant socialite siblings from across the world who are used to moving in the same circles as supermodels, aristocrats and royals.

They were ranked among others as one of the most glamorous sets of twins on the elite social scene.

The sisters have an unbreakable bond as twins, with Lady Amelia telling Tatler she and Lady Eliza have always been close and are ‘very similar’.

‘We love doing the same things and share the same friends,’ she said. ‘You’re guaranteed to have a best friend there always – you can’t really compare it to anything else.’ 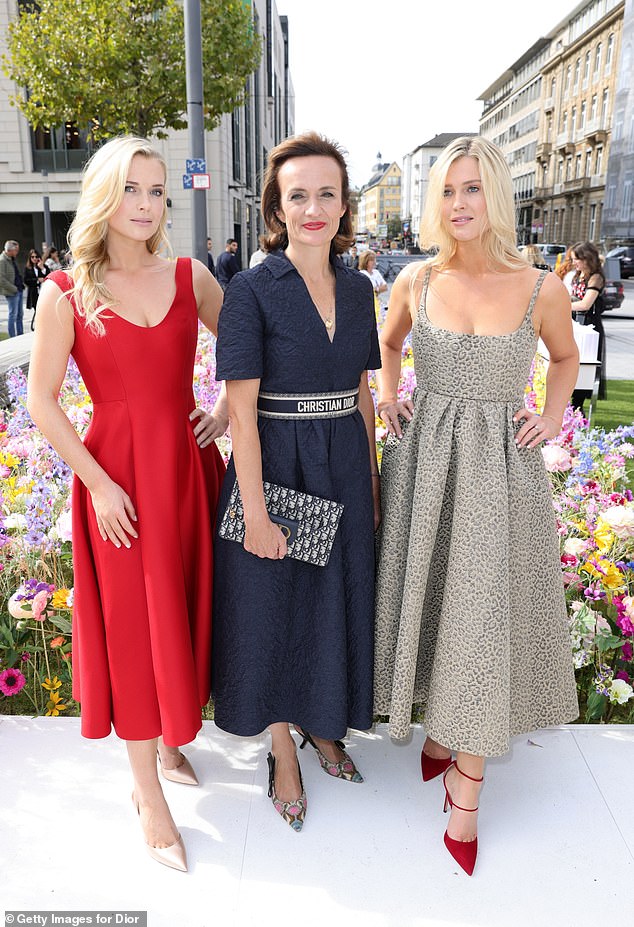 Amelia and Eliza, who are both signed to Storm Model Management, posed for a snap with Carola Graser-Kraus, Country General Manager Parfums Christian DIOR, at the event

She added that they are a ‘very open family’ and value the importance of talking about mental health.

‘It was never something that we felt afraid to talk about when we had our own struggles,’ Lady Eliza said.

The society beauties also told Tatler they have very fond memories of Althorp, the Spencer family seat, where they’d stay with their father during the school holidays.

‘It is a truly special and beautiful place. Having spent the first three years of our lives at Althorp, exploring and discovering it as children, and being part of a long heritage of Spencers that have lived there, it has always felt like another home,’ Lady Eliza said.

‘And of course it conjures up memories of family Christmases as children, with our extended family all together.’

Speaking to Hello magazine, Eliza and Amelia revealed they have ‘precious memories’ of their late aunt Diana who was close to their hearts.

It is not known when Greg and Amelia will marry, or if they will choose to wed in England or South Africa. Lady Amelia hasn’t ruled out holding the wedding at Althorp, after her father suggested their family seat as a venue.

Meanwhile Eliza and Channing often share romantic snaps together on Instagram of their date-nights and lavish holidays abroad.

Marketing executive Channing, who attended the same school as Eliza’s brother, Viscount Althorp, has a son from a previous relationship, and his girlfriend appears to dote on the boy.