The 36-year-old writer Aatish Taseer (left) married lawyer Ryan Davis, 32, (right)  in August 2015 (Taseer is pictured to the right on the left hand picture and Davis on the left)

He romanced Lady Gabriella Windsor for three years but Aatish Taseer is now happily married to a man, The Mail on Sunday can reveal.

The couple live in a £1.2 million flat in Manhattan’s Upper West Side with their dog Zinc, and Taseer has become an outspoken gay rights advocate.

In an article for Travel + Leisure magazine a year after their wedding, Taseer wrote about taking a road trip with his new husband across the American South, which traditionally voted against legalising same-sex marriages. Gay marriage became legal across America in 2015 after a historic vote by the US Supreme Court.

Taseer wrote of his nerves at meeting Ryan’s mother: ‘Like many Southerners, Mrs Davis had not totally adjusted to the Supreme Court’s decision to uphold our right to marry.’

He added the pair had ‘doused our nerves in white wine’ over lunch.

On drugs and nude swimming

For three surreal years, Ella and I hung about Kensington Palace; we swam naked in the Queen’s pool in Buckingham Palace; we did MDMA [ecstasy] in Windsor Castle… The cosy crowned heads of small Eastern European countries cooked us lamb chops late at night and told us tales of Nazis and Communists. It was a wonderful way to spend one’s 20s.

On life at Kensington Palace

I have happy memories of KP – Burmese cats in window seats and wooden commodes, deep bathtubs and walled gardens – but the truth is that until Will and Kate arrived to liven up the place, Kensington Palace was wildly depressing.

On racism and the royals

She [Princess Michael] feigned an odd mixture of injustice and contrition: ‘I daren’t even say I want my coffee black any more…’ I would have liked to believe her but I had my doubts. It was not that her father had allegedly been an SS officer, albeit a reluctant one; Royals and Nazis go together like blini and caviar.

On Princess Michael’s view of marriage

She was of the firm belief that it was a bad idea for royalty to marry commoners. ‘It’s all very well Ella marrying Mr Taseer from India or Pakistan,’ she once said to me… ‘But the moment the girl down the road thinks she can be a Princess, or Queen, it’s all over. The mystery is gone.’

My own enduring memory of the Windsors was of constant cutbacks and reduced circumstances.

To fly with royalty was to fly EasyJet.

The author’s Instagram page is full of pictures of the pair, who share a love of fine food and travel. There are numerous shots of their wedding day on August 8, 2015, which was attended by The Satanic Verses novelist Salman Rushdie.

In 2016 Taseer – who is half Indian and half Pakistani, an also a British passport holder – wrote of his pride at obtaining a green card, the first step towards US citizenship.

‘Married to an American, I was entering [the US] for the first time as a permanent resident,’ he said. ‘I was overcome by what must be one of the most unfashionable emotions of our time; boundless, unqualified love for America.’ 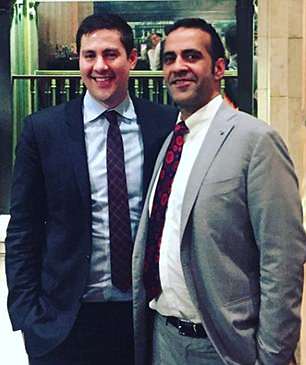 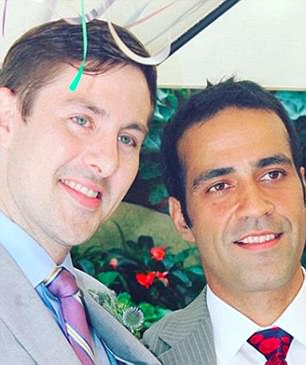 Taseer’s Instagram page is full of pictures of the pair, who share a love of fine food and travel

In the article for the Wall Street Journal, he spoke about experiencing racism in the UK, where he was born in 1980: ‘The racism that I experienced in Britain was insidious and casual. It was not part of a society coming to terms with a difficult racial history; it was a society telling you in the clearest terms that you would never belong.’

He has also written extensively about gay rights and is an advocate of legalising gay marriage in India and Pakistan, where it is still illegal for same-sex couples to wed.

The writer who claims he took ecstasy with Lady Gabriella Windsor faced a Royal backlash last night – and was even branded a despicable cad by his own brother.

In an article for Vanity Fair, apparently calculated to embarrass the Royal Family ahead of Prince Harry’s wedding next month, Taseer claimed he swam naked with Lady Gabriella – also known as Ella – in the indoor pool at Buckingham Palace. 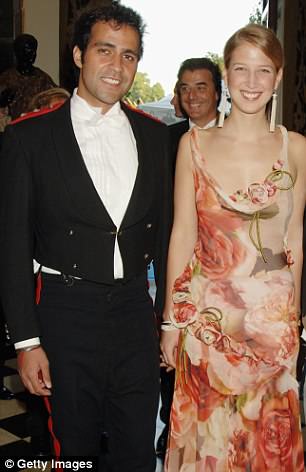 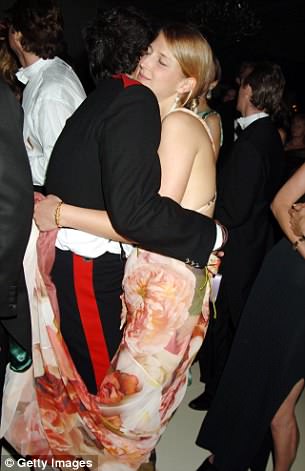 Her family and friends rallied to her defence last night, with some of the younger members of the Royal Family sending her messages of support.

And in an astonishing intervention, Taseer’s half-brother called him ‘revolting’ and described him as an attention-seeker with a ‘lively imagination’.

Shehryar Taseer, 42, a Pakistan-based media magnate, told The Mail on Sunday: ‘I find it quite sickening that he has written this article weeks before the Royal wedding. It’s purely an attention-seeking piece from somebody who has been cut out of high society. It is a despicable, cad thing to do, to reveal secrets in a kiss and tell. A gentleman would never do such a thing.’

A source close to the Royal Family said: ‘What he has done is appalling and unnecessarily cruel, especially when he has only ever been shown kindness by her family.’

Another friend added: ‘How pathetic and needy to capitalise on a romance that ended 12 years ago with a treacherous cocktail of innuendo, invention, indiscretion and something akin to sour revenge.

‘What on earth for? He enjoyed the privileges of Palace life and now chooses to spit it back in his ex-girlfriend’s face.’ 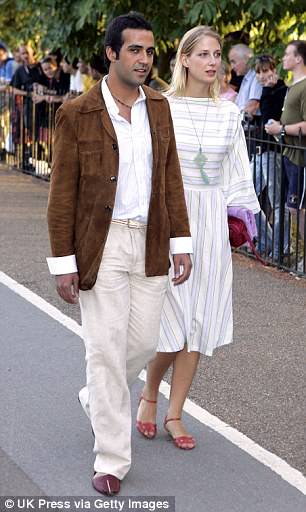 Lady Windsor and Taseer at the 2006 Serpentine Gallery summer party

During their romance – at one point they were tipped to marry –the couple stayed with Shehryar, who also heads a real estate empire, at his home in Karachi.

‘She is a lovely lady,’ Shehryar said. ‘She was an absolute pleasure when she stayed with me.’

He said he did not know if his New York-based brother’s claims about Lady Gabriella, 37, were true, but claimed Taseer was prone to exaggeration. ‘When people do things in their private life, they don’t expect them to be revealed ten years later in an article a few weeks before her cousin’s wedding,’ he said. ‘It’s exactly his character. It’s exactly what I would have expected him to do.

‘The timing could not be more pathetic. Why is he speaking about it now? His is a dying name nobody remembers any more. He’s desperate to come back to the limelight.’

In the article published on Friday, Taseer said he and Ella ‘swam naked in the Queen’s pool at Buckingham Palace; we did MDMA [ecstasy] in Windsor Castle; and we had scrapes with the press.’

Taseer also alleged that ‘Royals and Nazis go together like blini and caviar’ and that Princess Michael once owned two black sheep which she named Venus and Serena, after the US tennis sisters.

The article may seem all the more of a betrayal given that Taseer was taken into the very heart of the Kent family. Indeed, Princess Michael once described him as ‘one of the most handsome men I have ever met’.

The couple were introduced by mutual friends in 2003 while Taseer was studying at Amherst College, Massachusetts, two hours from Brown University where Ella was studying comparative literature.