Lady Gaga’s dog walker has revealed he suffered a collapsed lung while recovering from being shot in the chest during the bizarre theft of her French bulldogs on February 24th.

Ryan Fischer, 30, was shot four times while he was out walking Gaga’s three dogs, Koji, Gustav and Miss Asia, before thieves snatched two and left Ryan fighting for his life.

Taking to Instagram on Monday – a month after his terrifying ordeal – Ryan posted a health update and revealed he was on the road to recovery before hearing a ‘strange hissing and glugging’ coming from his chest.

Scary: Ryan Fischer gave an update on his recover this week and revealed his lung has collapsed numerous times in the days following the shooting

He wrote in a lengthy post: ‘For me, I was recovering remarkably fast. In days I had gone from bleeding out on a sidewalk, to overly-active ICU patient (which they were VERY not used to), to just waiting for my lung to heal so I could go home: everything appeared quite straight forward.

‘And so, with the chest tube removed (which I can only equate to an alien baby extraction) and my blood oxygen stable, the journey outside to recover with loved ones began.

‘I was prepared to quietly start a path to healing from the emotional trauma and continue on my way. Life would be back to normal soon enough. 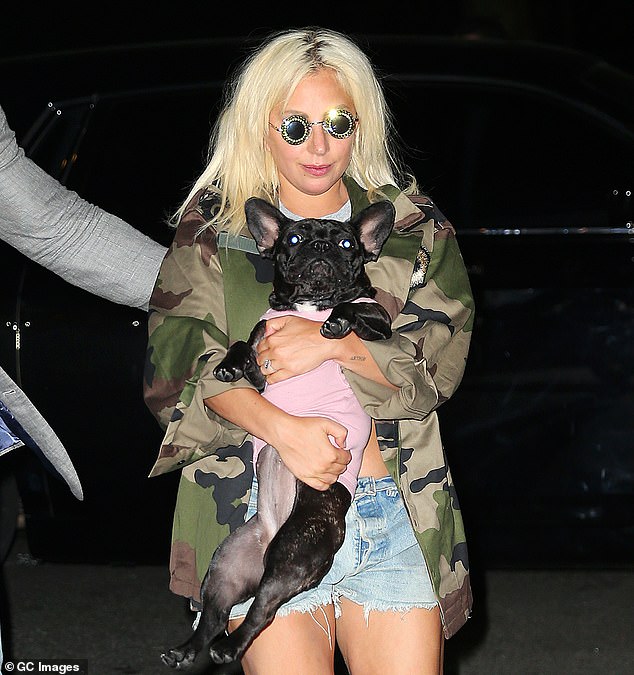 Fischer, 30, was shot four times last month when he was out walking Gaga’s three French bulldogs, before thieves snatched two of the pooches and left Ryan battling for his life. Gaga seen here in 2015 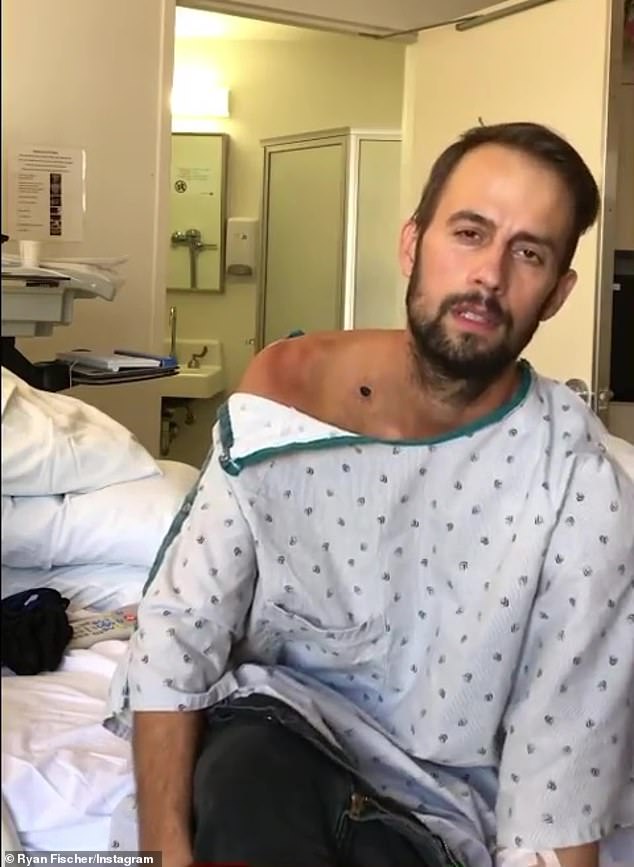 One month on: He shared a video of him at hospital and a lengthy description of what he’s been through since the shooting on February 24 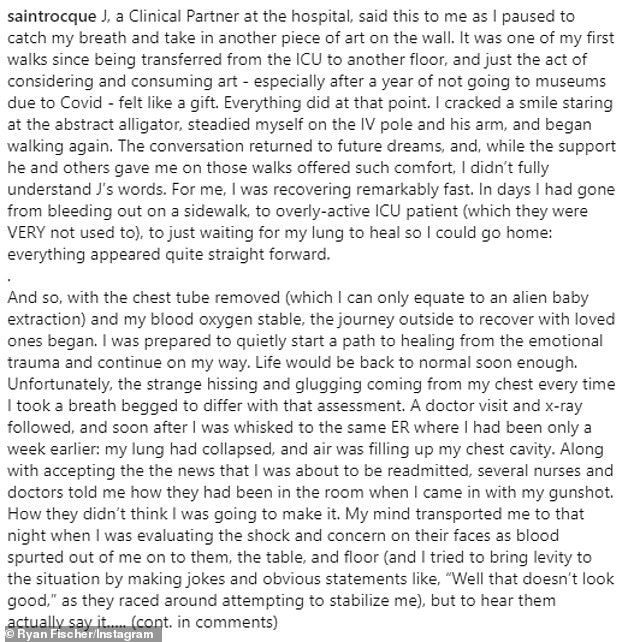 Collapsed lung: Fischer revealed that he went back to hospital after suffering ‘hissing and glugging’ coming from his chest when he took a breath 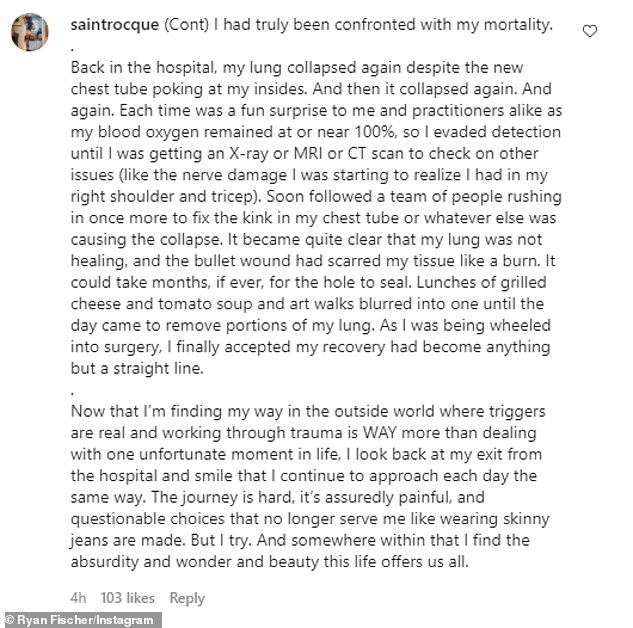 ‘Working through trauma’: Fischer spoke about how complicated his recovery has been and how it’s helped him to appreciate life in a different way

‘Unfortunately, the strange hissing and glugging coming from my chest every time I took a breath begged to differ with that assessment.

‘A doctor visit and x-ray followed, and soon after I was whisked to the same ER where I had been only a week earlier: my lung had collapsed, and air was filling up my chest cavity. (sic)’

Ryan was re-admitted into the ICU, but thanks to the doctors and nurses who treated his wounds.

He has now been fully discharged from hospital to continue his recovery at home. 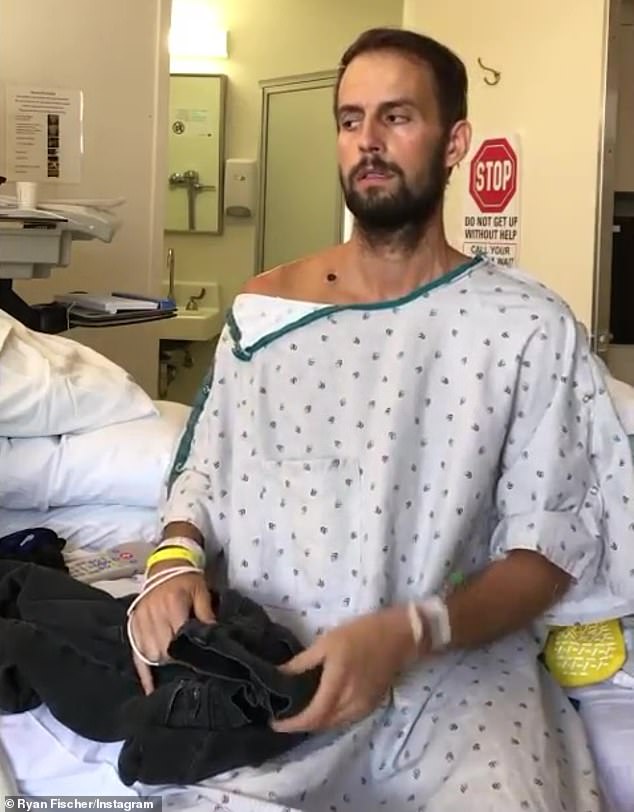 Long road ahead: Fischer explained it could take months for his bullet wounds, which scarred his lungs, to heal

He added: ‘Now that I’m finding my way in the outside world where triggers are real and working through trauma is WAY more than dealing with one unfortunate moment in life, I look back at my exit from the hospital and smile that I continue to approach each day the same way (sic)’

Gaga’s two kidnapped dogs – Koji and Gustavo – were found and returned two days after the attack, whilst the third pooch, Miss Asia, was recovered at the time of the theft.

The Shallow hitmaker offered a $500,000 reward to anyone who returned her dogs safely, and is also said to be paying for Ryan’s medical bills.

An insider previously said: ‘Gaga feels horrendous about what happened to Ryan and wants to make sure he is looked after.

‘She absolutely adores him and is forever indebted to him for his bravery. She also wanted to compensate him for lost work and wishes him a speedy recovery.’ 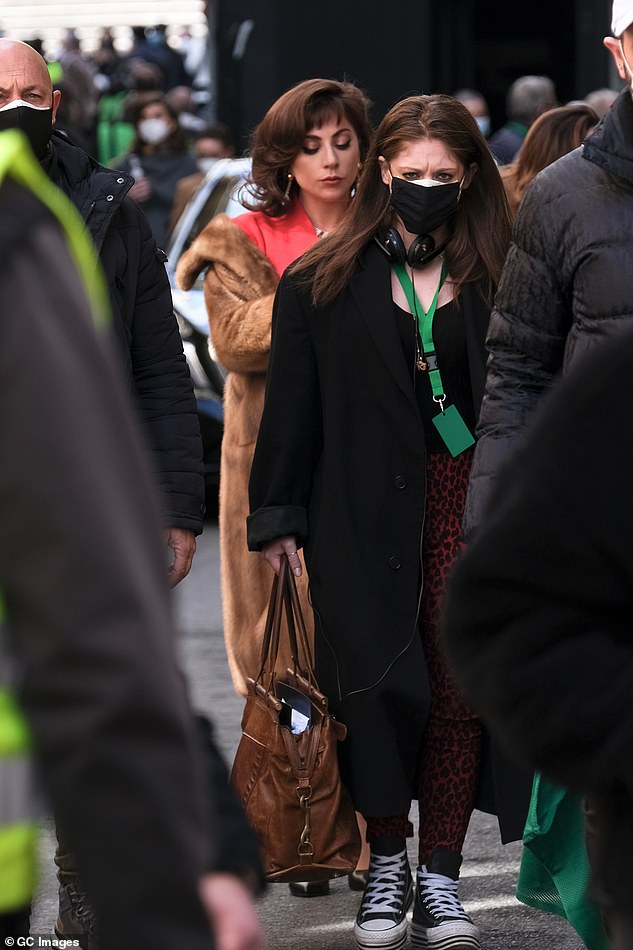 Working: Gaga has been in Rome filming House of Gucci. She is seen here on March 22