Making the most of the mild October temperatures, Lady Victoria Hervey made a splash at the beach yesterday.

The 46-year-old socialite was spotted enjoying a stroll by the blue waters of Malibu, with her adorable pooch Dartagnan in tow.

Victoria was well-equipped for her beach day, showing off her slim figure in a glittering bikini, which she paired with a white kaftan adorned with sequins.

The model looked relaxed during the outing, which also saw her don what looked like a sparkly Halloween costume.

She was pictured walking confidently by the waves, Dartagnan following her on a leash.

Lady Victoria Hervey made a splash in Malibu yesterday, where she was spotted enjoying a stroll on the beach with her adorable pooch Dartagnan

Victoria was well-equipped for her beach day, showing off her slim figure in a glittering bikini, which she paired with statement jewellery

She also donned a stylish pair of sunglasses as the sunbeams warmed up the sand of the Malibu beach.

Her blonde locks complimented the shimmer of her scant outfit as the gentle Malibu breeze ruffled them.

She sported a natural, sun-kissed makeup with a dash of bronzer and a glossy lip.

Lady Victoria dipped her toes in the water during her walk, which appeared to precede the model attending a fancy dress party, also on the beach.

Another picture, taken at the same location yesterday, showed the socialite with Dartagnan, this time sporting a very sparkly Cleopatra outfit.

She paired a teal sequin skirt with a black top, and completed the look with gold arm vambraces, a snake headpiece and a gold collar adorned with toy gems. 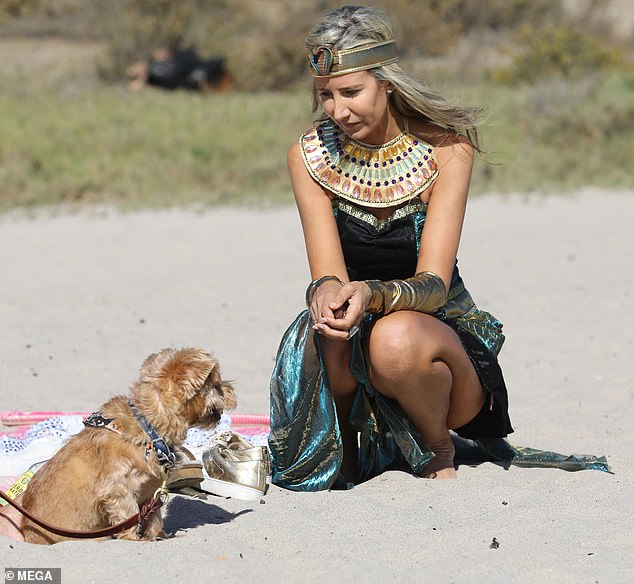 Another picture, taken on the same beach yesterday, showed the socialite with Dartagnan, this time sporting a very sparkly Cleopatra outfit

A pair of gold trainers were spotted by her side, as Dartagnan took great interest in his beloved owner’s fancy getup.

The Malibu trip happens as Lady Victoria is thought to have moved back to London, after over two decades of living in the US.

Not one to mince her words, the beauty told The Daily Mail: ‘All my friends in LA have left because it’s a s***hole.’

She continued: ‘It’s really nice if you don’t leave the house, but, as soon as you leave, you see the homeless, crackheads and half-naked women with no teeth throwing things at you.’

She added she didn’t feel the Californian city is safe anymore. 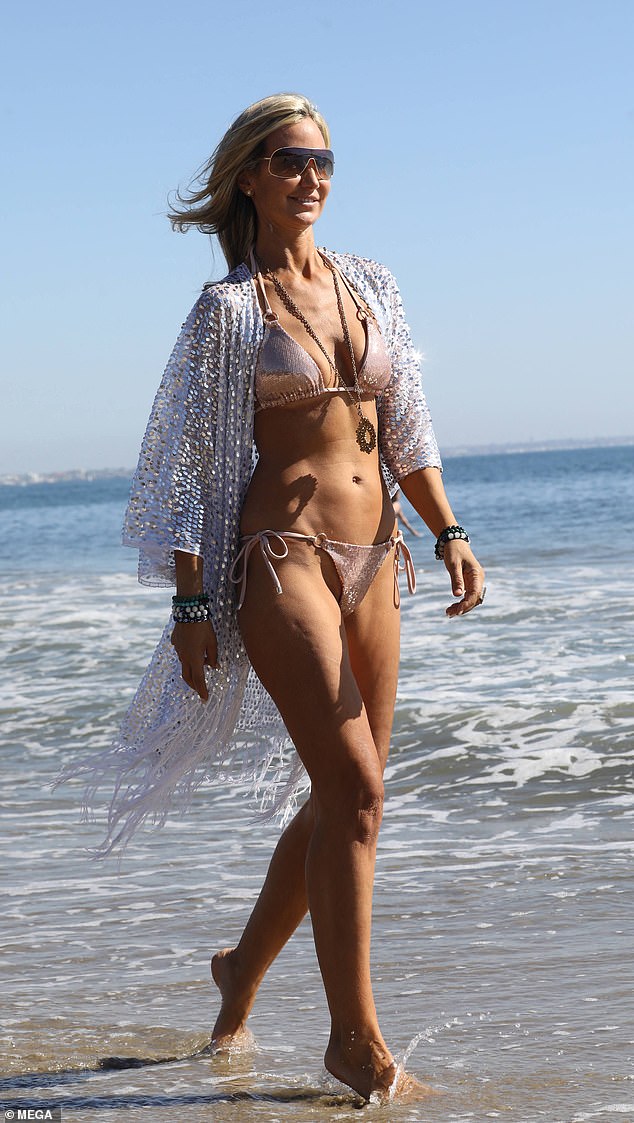 Lady Victoria dipped her toes in the water during her walk, which seemed to have happened as the model prepared to join a fancy dress party for Halloween

Victoria has been sharing a slew of snaps to her 443k Instagram followers upon returning to the UK, taking in all of the capital’s landmarks once again.

And it seems moving wasn’t the only big change that the socialite has considered, previously explaining how she was considering starting a family before the Covid-19 pandemic happened – but is glad now she didn’t.

She admitted that pregnancy magazine Project Baby had also influenced her thinking — as she has a prospective sperm donor/father lined up, should she decide to start a family.

Six of her eggs were frozen and stored three years ago, at a cost of £11,000, and she spent the time afterwards looking for a donor.

‘And I was supposed to be pregnant now. But then Covid happened, which was a big blow, but looking back I’m really grateful I didn’t do it with that person. He just wasn’t right.’