The Detroit Pistons took Oklahoma State’s Cade Cunningham first overall at Thursday’s NBA Draft in Brooklyn, but the biggest basketball news of the night belongs to the Los Angeles Lakers, who reportedly agreed to a deal to add former MVP Russell Westbrook alongside LeBron James.

ESPN’s Adrian Wojnarowski is reporting that the Lakers have agreed to a deal with  the Washington Wizards for Westbrook, who would return to his native Los Angeles to play for his fourth team in four seasons.

Sources told ESPN that the Lakers would send Kyle Kuzma, Montrezl Harrell, Kentavious Caldwell-Pope and a 2021 draft pick in the proposed trade.

The Detroit Pistons are on the clock with the first pick in tonight’s draft in Brooklyn, but the biggest NBA news of the night belongs to the Los Angeles Lakers, who are reportedly nearing trade to add former MVP Russell Westbrook (right) to a cast that includes LeBron James (left) 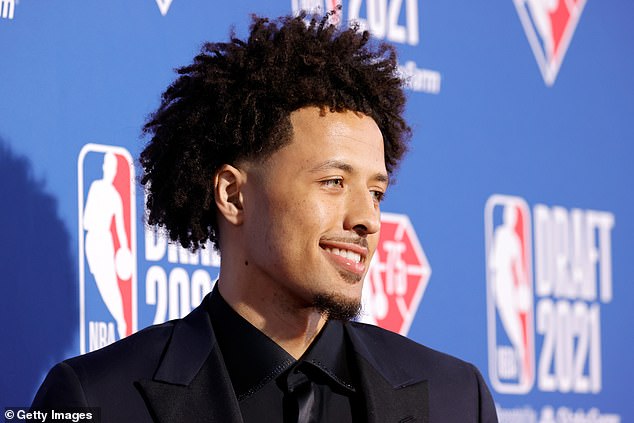 NBA commissioner Adam Silver, center, poses for a photo with players projected to be first round draft picks before the NBA basketball draft

After winning the franchise’s 17th league title inside the NBA bubble in 2020, the Lakers suffered a first-round defeat to the eventual Western Conference Champion Phoenix Suns in the playoffs this year largely due to injuries to Davis and James.

The Lakers were also criticized for a lack of backcourt depth, with Westbrook, a former UCLA star, would certainly address.

Los Angeles was previously had reported interest in trading Kuzma for the Sacramento Kings’ Buddy Hield, but that deal would no longer be possible if the Lakers complete the acquisition of Westbrook.

As for the NBA Draft, Cunningham had been expected to go first overall to the Pistons. He was followed by the G League’s Jalen Green, who went second to the Houston Rockets, USC center Evan Mobley, who was picked third by the Cleveland Cavaliers, Florida State’s Scottie Barnes, who was taken fourth by the Toronto Raptors, and the fifth-overall pick by the Orlando Magic, Gonzaga’s Jalen Suggs.

In a surprise move, the Oklahoma City Thunder picked Australia’s Josh Giddey with the sixth pick. 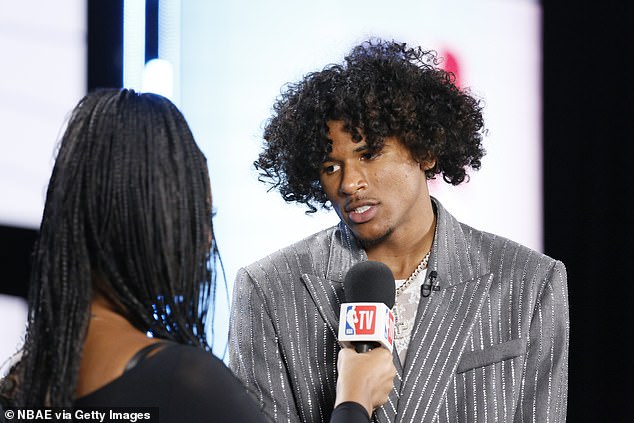 Jalen Green is interviewed before the 2021 NBA Draft on Thursday 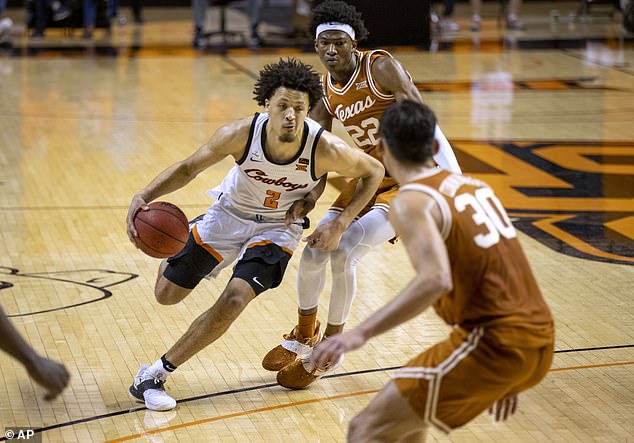 Cunningham had been expected to go first overall to the Pistons. The Oklahoma State one-and-done star could accomplish that goal Thursday night as the headliner of a class that includes scorers, playmakers and potentially elite defenders at the top. ‘I’ve been saying for a long time,’ Cunningham said, ‘we have one of the best classes in a long time. And I’m really appreciative of the fact that we’ve all been pushing each other throughout us coming through high school and things like that’

Cunningham had been widely expected to be the first name called in New York, though Pistons general manager Troy Weaver wouldn’t reveal plans earlier this week and said the team would look at every scenario, including trades.

In the end, Detroit stuck with the 19-year-old mentioned as a potential top pick before ever stepping foot on the Oklahoma State campus.

The 6-foot-8, 220-pound point guard from Arlington, Texas, lived up to expectations with his size and fluid game to become a first-team Associated Press All-American. He averaged 20.1 points, 6.2 rebounds and 3.5 assists with a game that allowed him to hit from 3-point range, score off the dribble or find teammates out of traps.

Cunningham attended the draft wearing a dark suit, shirt and tie with sparkles on his collars and cuffs. When the pick was announced, Cunningham kissed 2-year-old daughter Riley, sitting on his lap, hugged family members then took the stage alongside NBA Commissioner Adam Silver to don a blue Pistons hat.

Cunningham – the first player in Oklahoma State history to be picked No. 1 overall – joins a Pistons franchise that has won 20 games for two straight seasons and hasn’t finished better than .500 for five straight years.

Houston followed at No. 2 by grabbing preps-to-pros teenager Jalen Green, who bypassed college basketball to play in the G League. The 6-foot-6 Green averaged 17.9 points on 46% shooting 15 games, showing off high-flying dunks, a willingness to attack the rim and a promising shooting touch.

The draft is later than its traditional late-June slot for the second straight year due to the COVID-19 pandemic that interrupted the 2019-20 season. The 2021-22 season is scheduled to return to its normal schedule, with next year’s draft set for June again.

After Detroit took Cade Cunningham first and Houston selected Jalen Green, the Cavs nabbed the 20-year-old Mobley, a two-way talent who is just tapping into his potential.

The 7-foot Mobley will join young guards Darius Garland, Collin Sexton and forward Isaac Okoro to give Cleveland a foundation to build from. The Cavs have been in disarray since LeBron James left as a free agent after the 2018 season.

Shortly before the draft began, the Cavs agreed to acquire veteran point guard Ricky Rubio from Minnesota, a person familiar with the negotiations told The Associated Press.

Cleveland is sending small forward Taurean Prince, cash and a second-round pick in 2022 to the Timberwolves for the 30-year-old Rubio, said the person who spoke on condition of anonymity because the NBA has to approve the swap.

The deal for Rubio came as he was in Tokyo playing for Spain’s Olympic team. He’ll give the Cavs a dependable backup at the point and a mentor for Garland and Sexton.

The Cavs felt as if they were in a no-lose situation with the third pick, the highest they’ve selected since taking Andrew Wiggins first overall in 2014 and then trading to him to Minnesota in the deal for Kevin Love.

They listened to numerous trade offers before holding on to the pick and taking Mobley, who led the Trojans to the Elite 8 last season. He averaged 16.4 points and 8.7 rebounds in his one college season and was named the Pac-12’s best player, top freshman and best defensive player.

Cleveland had a disappointing injury-riddled 2021 season, which ended with the Cavs losing 16 of their last 18 games to finish 22-50. They were never really in the playoff chase, but the team came away feeling good about the development of some of its young players.

Now they’ve got another one in Mobley, who has been compared to a young Chris Bosh.