Lamar Jackson celebrated the Ravens’ win Thursday by delivering a particular message to the organization’s front office – and not for the first time.

The quarterback was handed a sign after Baltimore’s 27-22 win over the Bucs that read ‘RAVENS PAY EM’ NOW’ with Jackson’s No. 8 as well as receiver Rashod Bateman’s No. 7 on the poster.

Jackson autographed the poster before handing it back to the fan with a coy smile on his face. 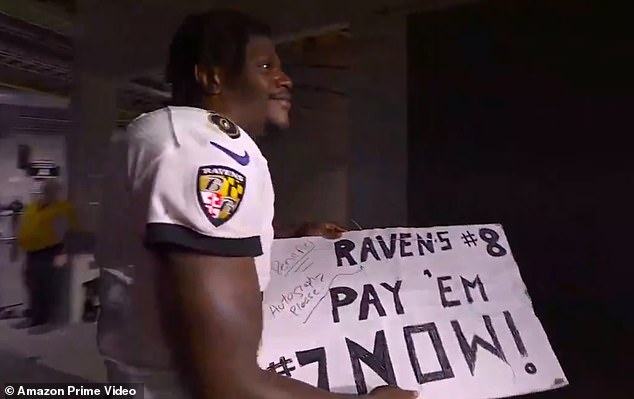 The sign references Jackson’s unsuccessful contract negotiations with the team over the offseason, as the two sides failed to agree on a long-term deal for the 2019 MVP.

Jackson is making more than $23 million this year on a fifth-year option, but according to NFL Network, is seeking a deal close to the $230million guaranteed that Deshaun Watson received from the Browns once he was traded there.

That amount is roughly the same as what Jackson would make if he plays out his option, an exclusive franchise tag in 2023 and another tag in 2024, as NFL Network noted.

For now, Jackson is playing without a long-term deal, and he and the Ravens will revisit contract talks at the end of this season.

The fifth-year quarterback will not have hurt his leverage in those talks with his performance Thursday night, as he threw for 238 yards, two touchdowns and ran for 43 more without some of his top playmakers available. 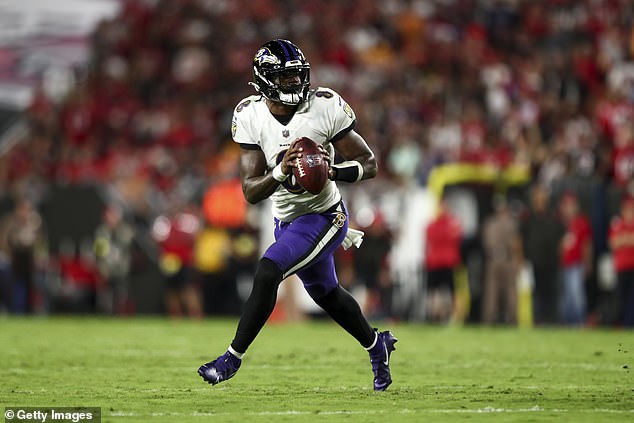 Lamar Jackson threw for two touchdowns vs. the Bucs and also rushed for 43 yards

Mark Andrews, Rashod Bateman, and Gus Edwards all exited the game due to injuries, yet Jackson found a way to lead the offense with a somewhat ragtag group around him.

Jackson may find it hard to reach the heights of his 2019 MVP season in coming years but his 2022 has been strong.

He’s got 15 touchdowns against six interceptions and has already rushed for 553 yards in eight games. 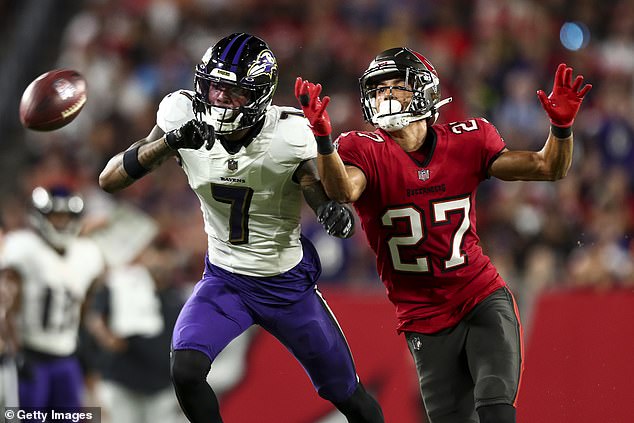 Rashod Bateman finished with zero yards vs. the Bucs after exiting the game with a foot injury

Bateman, who was also referenced on the sign, may find it hard to obtain a long-term deal any time soon.

The wide receiver still has two years remaining on his rookie contract after 2022, and has been solid but unspectacular early into his career.

The former Minnesota wideout has missed seven games since his rookie season last year and has averaged 44.4 yards per contest.