An elderly motorist has received ten fixed penalty notices worth up to £2,000 over the past seven years for a £200,000 car he does not own.

But the frustrated pensioner owns a white Peugeot 3008 worth a tenth of the Bentley’s value as new – and he has not even been driving in the capital.

Gordon King, 76, of Lancashire, who drives a white Peugeot 3008, has received letters claiming a dark-coloured Bentley Mulsanne has been flouting the London congestion charge

Mr King registered his own personalised numberplate, K11 NNG, in 1993 – and it is believed the Bentley car originally had the plate of K11 NNC.

But CCTV still images on the letters appear to show the ‘C’ on the Bentley’s plate has been changed to a ‘G’ – giving the same registration as Mr King’s car.

He said: ‘This guy is still using these plates – it’s astonishing. It must be a crime. I keep telling people about it but I feel like I am going round in circles.’

The saga began in Mr King when Mr King received his first penalty notice. He disputed it because it was not his car and he had never driven his car in London.

The authorities accepted this and cancelled the notice, but since then it has happened nine more times.

The notices all carry an image of the Bentley but are addressed to Mr King, who lives more than 200 miles away from London.

He has never actually had to pay the fixed penalty notice amount of £65, with warnings it could rise to £195 if not paid promptly.

Ten of these equates to nearly £2,000 in fines that he has been threatened with. 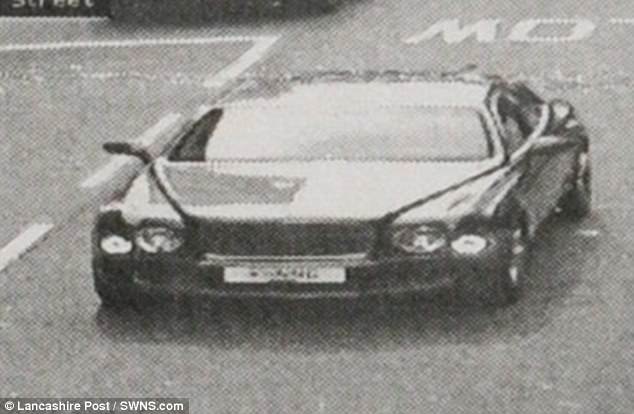 Mr King registered his own personalised numberplate, K11 NNG, in 1993 – and it is believed the Bentley car (pictured) originally had the plate of K11 NNC

However, he is fed up of the time it takes to contend each notice and just wants the problem to stop – but says he is being passed on to various authorities to no avail.

Mr King said: ‘My appeals to Transport for London, the Metropolitan Police and DVLA Swansea have failed to prevent repeats, even though some justice has prevailed in that each PCN has been cancelled after lengthy and stressful battles.

‘Each of the above organisations say it is the responsibility of the others to take action for what I understand is a criminal offence; an argument which I find baffling.

‘Who can I appeal to in order to get this bureaucratic nightmare off my back once and for all?’

Mr King bought his numberplate as it bears a resemblance to his surname – and when he started receiving penalties, he assumed the Bentley was using false plates.

But when he looked closer at the photographic evidence it looked like something had been added to make a ‘C’ on the plate look like a ‘G’.

Peter Blake, TfL’s director of service operations, said: ‘We apologise to Mr King for any distress caused from the Penalty Charge Notices he has received. 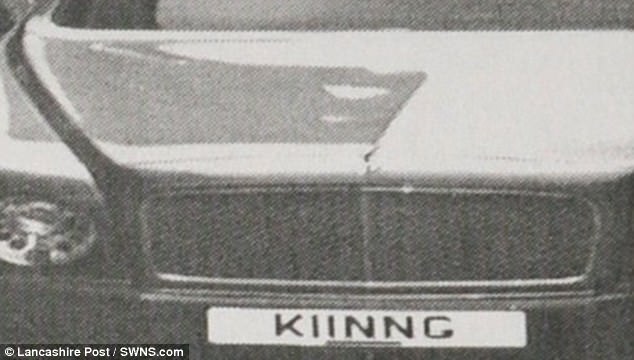 ‘To ensure this doesn’t happen again we have put Mr King’s details on a list that will instantly alert us to the anomaly in the future.’

Mr King’s ordeal began in 2009 when he received three penalty charge notices within three months from Transport for London (TfL).

In 2009 Mr King was driving a two litre Rover – approximately seven years old – which he had bought from new and bore the personalised number plate he had purchased in 1993.

‘I complained and was told by TfL to challenge the penalty charge notices. I did that and was given assurances that it would not happen again.’

Seven years went by, then at the beginning of 2017 the pensioner was shocked to get another through the post – this time at Westminster Bridge on February 14. 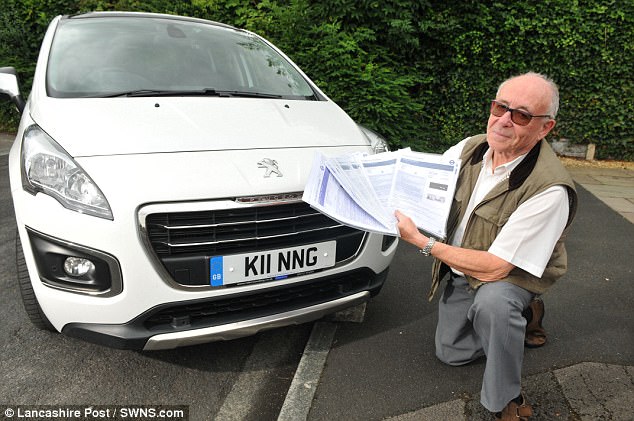 The saga began in Mr King when Mr King received his first penalty notice, but he disputed it because it was not his car and he had never driven his car in London

The car mistaken in this instance was his Peugeot 3008, which he had also purchased from new and was two years old.

Gordon, a father of two and grandfather of seven, said: ‘The person I spoke to at TfL said ‘that is obviously not your car’.

‘The details of my Peugeot were on the same notice with the picture of the Bentley. They cancelled the charge and I thought sense had prevailed.

‘Then on February 17 I got another notice – this time for Upper Grosvenor Street. The woman I spoke to said I would have to send a picture of my car and a copy of the notice – then it was cancelled.

‘I got another one for New Cavendish Street on February 22 then another for Upper Grosvenor Street dated March 1.

‘That was cancelled after a lot of hassle – but it didn’t happen straight away. Then I had another for April 20 on Harrowby Street but I got nowhere with the guy at TfL this time.’

Frustrated Mr King, an electrical industry retiree, was told all the previous representations he had made had been removed from the system and he would have to challenge again in writing.

He said: ‘After all that I then had another for Upper Grosvenor Street on April 27 – you can imagine how frustrated I got by this point. 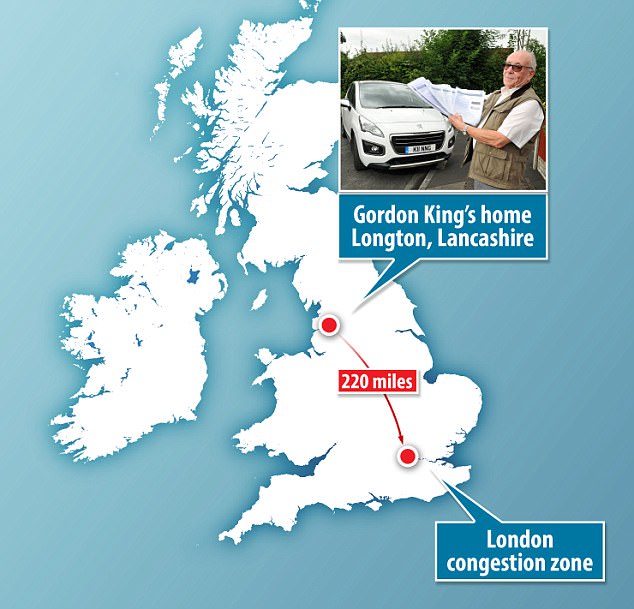 ‘This time a really helpful woman told me all future notices would be intercepted and this would be confirmed in writing. But the letter never arrived.

‘Then I got another charge on August 1 when we returned from our holiday – again for Upper Grosvenor Street. At this point it was the last straw.

‘I spoke to the Metropolitan Police and told them I had been notified all future penalty notices would be cancelled but the officer told me that TfL had no power to do this.

‘That’s when I said ‘I’ve had enough – you can take me to court’. I got an incident number from the Metropolitan Police and they told me to speak to the DVLA in Swansea.

‘They told me I should contact the police as it looked like my number plate had been cloned.

‘Now, after the press have been involved, I have had an apology from TfL and assurances that it won’t happen again but I’ve heard this all before and am just waiting for the next notice.’ 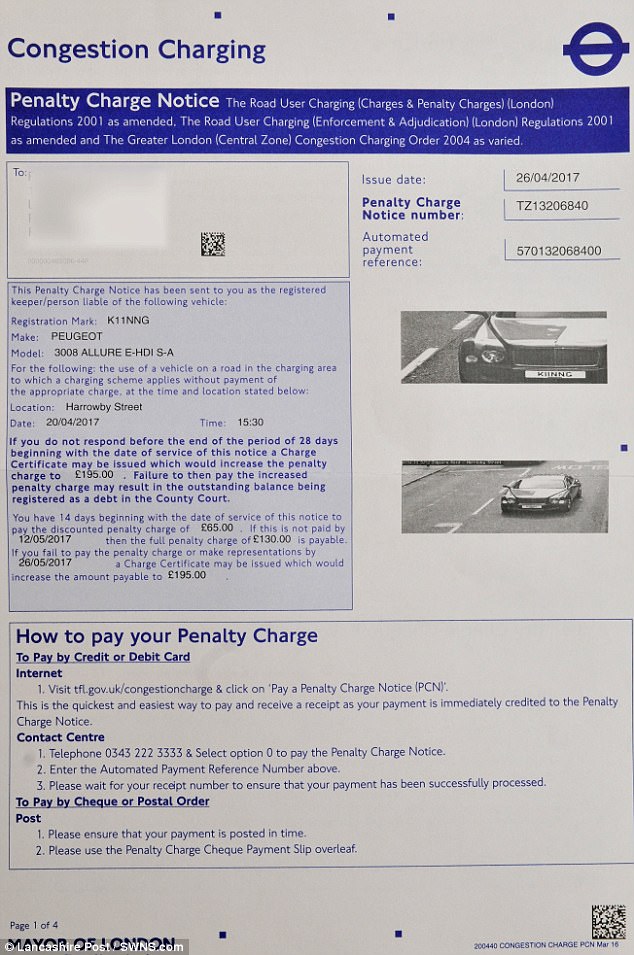 It comes after a computer gaffe led to another driver racking up a bill of almost £500 after being handed penalty notices every time he uses the Dartford Tunnel in Kent.

Bob Long owns a fleet of vehicles that all have personalised number plates relating to his surname, and the tunnel’s systems were seemingly getting them mixed up.

The jeweller regularly uses his Jeep, which has the number plate ‘1 ONG’, to travel to Hatton Garden on business and pays using the automatic Dart Charge scheme.

However, instead of taking the usual £2.50 per trip out of his bank account, cameras were mistaking the licence plate for a rarely-used classic car with the registration ’10 NG’ – not registered to Dart Charge – and were hitting him with a £70 penalty.

A Highways England spokesman said at the time that a technical fault had occurred, the notices had been cancelled and it would be apologising to Mr Long.

Have you suffered a similar fate? Please email: mark.duell@mailonline.co.uk