A learner driver was today charged with killing a shopper who was allegedly knocked down by a Land Rover following a row in a supermarket car park.

Window fitter Timothy Higgins, 21, is accused of the manslaughter of farmer Christopher Gadd, 48, in the Sainsbury’s car park at Pontllanfraith, near Caerphilly.

Deaf Mr Gadd, who wears hearing aids in both ears, died from head injuries in the car park on Monday.

Mr Gadd, of Mynyddislwyn, near Caerphilly, was a passenger in the VW car with his brother Paul, 49, on their way to buy fish and chips.

Higgins, of Wylllie, near Caerphilly, was charged with the manslaughter of Mr Gadd. He was also charged with not have a full driving licence nor having insurance.

Witnesses saw said the death followed an apparent row over a parking space.

Higgins was remanded in custody by Newport magistrates to face a trial at Newport Crown Court in April. 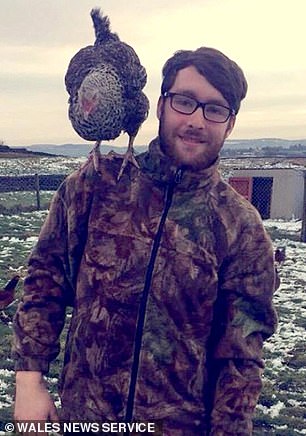 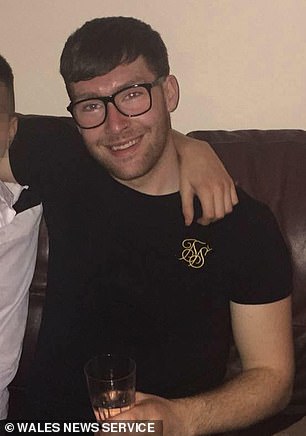 Higgins, 21, is due to appear in court in south Wales later today over the charge 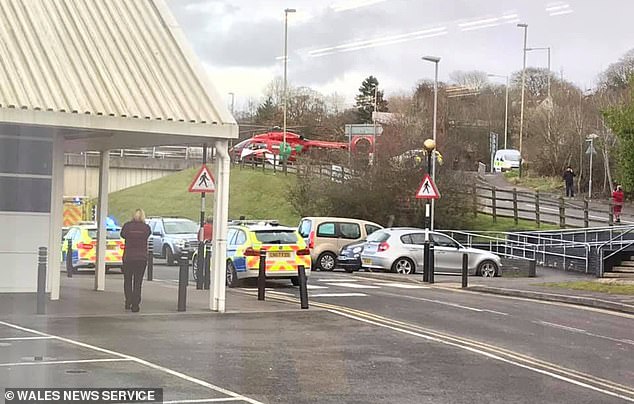 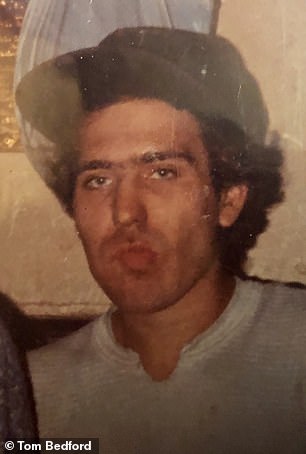 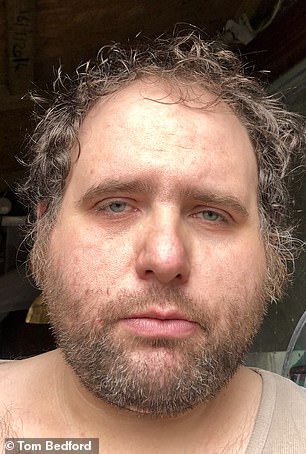 Christopher Gadd, 48, (left, in an undated image) was mowed down after a parking row. On the right is his heartbroken brother David, pictured yesterday

After the hearing, Gwent Police released a tribute from Mr Gadd’s family.

It said: “Christopher was a very loving and loyal brother who was our life. He will be sadly missed by his family and friends.”

Shoppers watched in horror as he was mown down and crushed to death by the Land Rover Freelander.

He later died in the arms of his brother Paul, 49, who had taken him on a rare shopping trip.

Their other heartbroken brother, David, has said that the deaf shopper was the victim of ‘pointless stupidity’.

David, 35, told MailOnline: ‘He hardly ever went out – it was the first time in months and it got him killed.

‘Paul rang me to say: “Chris is dead, there’s blood coming out of his eyes, ears and nose”.

‘I’m heartbroken. Chris was like a dad to me, he was my rock and he’s been taken away by petty and pointless stupidity over a parking spot.’

Christopher and Paul planned to buy cans of cider from Sainsbury’s, pick up a prescription from the chemists and then get takeaway fish and chips.

But there is limited parking at their local Sainsbury’s and shoppers were driving around looking for a vacant bay. 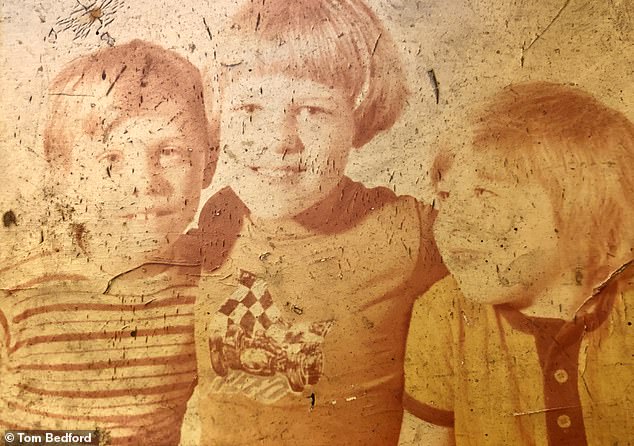 Brothers Paul, James and Chris Gadd as they were growing up in Pontllanfraith, Caerphilly, South Wales

Fighting back tears, David said: ‘Chris didn’t stand a chance – his hearing aids were found on a nearby pavement, they flew out through the force of the impact.

‘He got out of the car to ask: ‘What’s your problem?’ But he never got to find out.

‘My brother was quiet, very likeable and lived a simple life looking after his dog and watching his favourite TV shows.

‘It’s horrible to think he went out to get a few cans and fish and chips and he won’t ever be coming back.’

It is another tragedy to hit the brothers – their mechanic father Leighton, was killed aged 51, in 1994.

He was working on an articulated lorry when the raised cab suddenly fell crushing him to death. 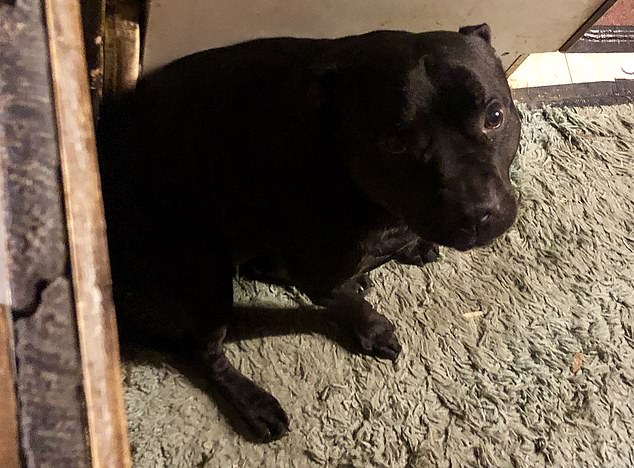 Christopher doted on his seven-year-old black Staffordshire bull terrier called Ralph, which is said to be ‘missing him terribly’ 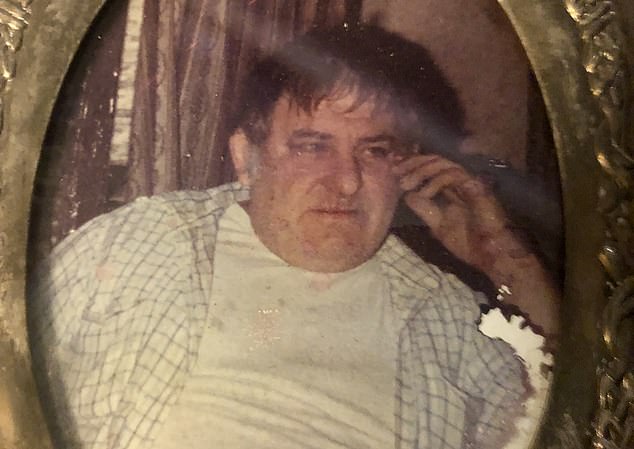 It is another tragedy to hit the brothers: their mechanic father Leighton, (seen in a family photo) was killed aged 51, in 1994

David, who is on disability benefits, said: ‘We’ve had more than our fair share of tragedies but this is by far the worst.

‘We’ve looked after each other since my parents died – I don’t know how I’m going to manage without Chris being there for me.

‘I feel like someone has ripped me apart, I was with him 24 hours a day.’ 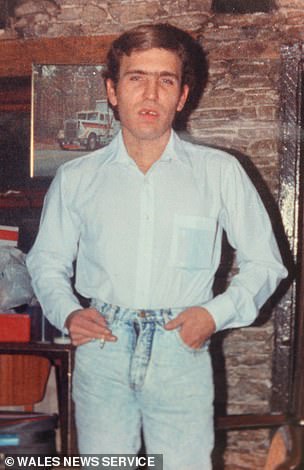 Christopher celebrated his birthday the day before he was killed at 4pm on Monday afternoon.

David said: ‘We bought him a box of his favourite fruit ciders and hid them in the car as a surprise.

‘We gave them to him on Sunday evening, he had four cans, the rest are still here.’

David said: ‘The poor dog is missing Chris like crazy, we all are.

‘My brother was registered disabled because of his deafness which was due to meningitis when he was a baby. It also affected his balance.

‘He could hear with his hearing aids and loved to watch TV with us, although we had to be silent because they would pick up all the background noise.

‘Chris loved old shows like the Dukes of Hazard and the Bionic Man. He was also a huge fan of WWE wrestling and soaps.

‘He couldn’t stand rugby and football, he would get cross if one of his favourite soaps were cancelled because some big match was on.’ 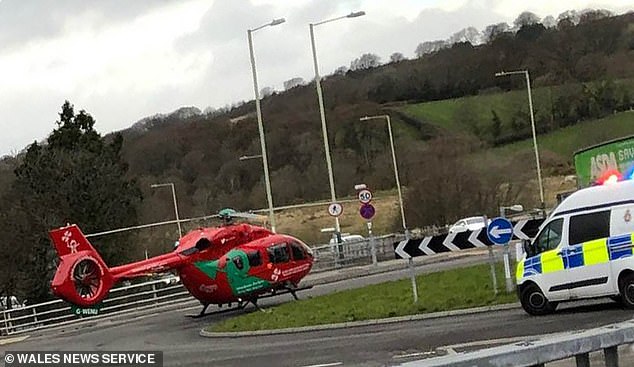 An air ambulance next to the Sainsbury’s yesterday

The three brothers rarely leave their isolated farmhouse – the last time they were in a pub together was in 1997 at the time Diana Princess of Wales died.

Paul and David have an older brother Jamie who lives nearby and is making Christopher’s funeral arrangements.

Former steelworker Paul was giving a statement to police today – his silver VW Passat car has been impounded along with the blue Freelander.