Fed up with visitors ‘trashing’ a beauty spot, the farmer who owns the land has taken drastic action – by blocking its entrance with 60 tons of slate.

Sheep farmer Allan Titley used a digger to block the only access to Blue Lake, a spectacular flooded quarry, in Gwynedd, North Wales.

He moved 60 tons of slate to seal off the mine workings which allow access to the lake, near the coastal village of Fairbourne, and hopes it will now become a nature reserve.

Mr Titley, 70, who bought his 500-acre farm in the 1980s, had previously allowed visitors access to the lake. The beauty spot is on private land and there is no right of way to it. 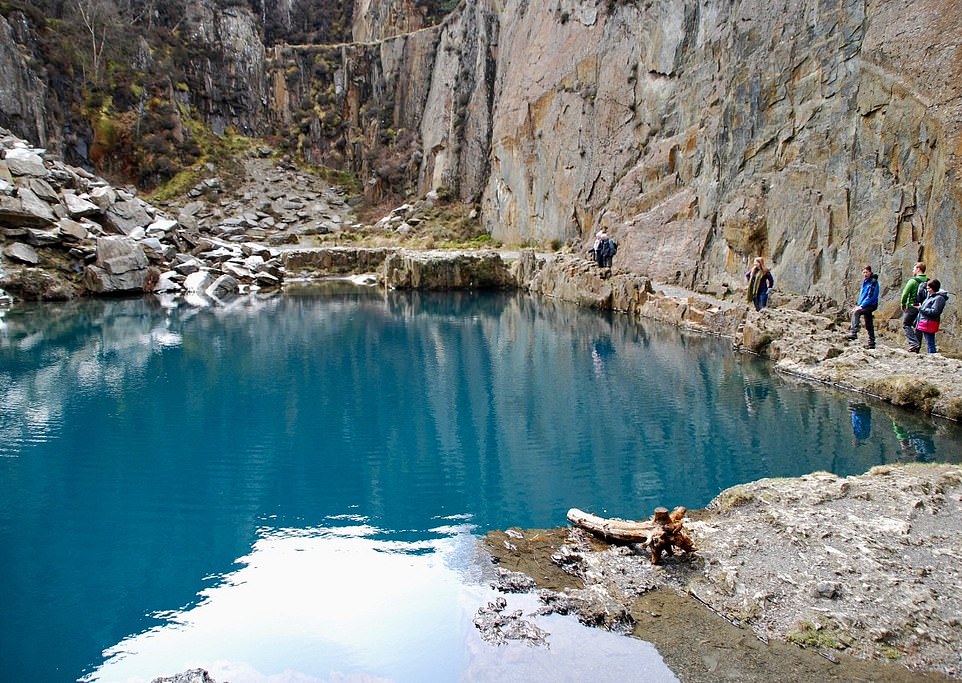 The beauty spot (pictured), a flooded quarry, is popular with visitors, but is on private land 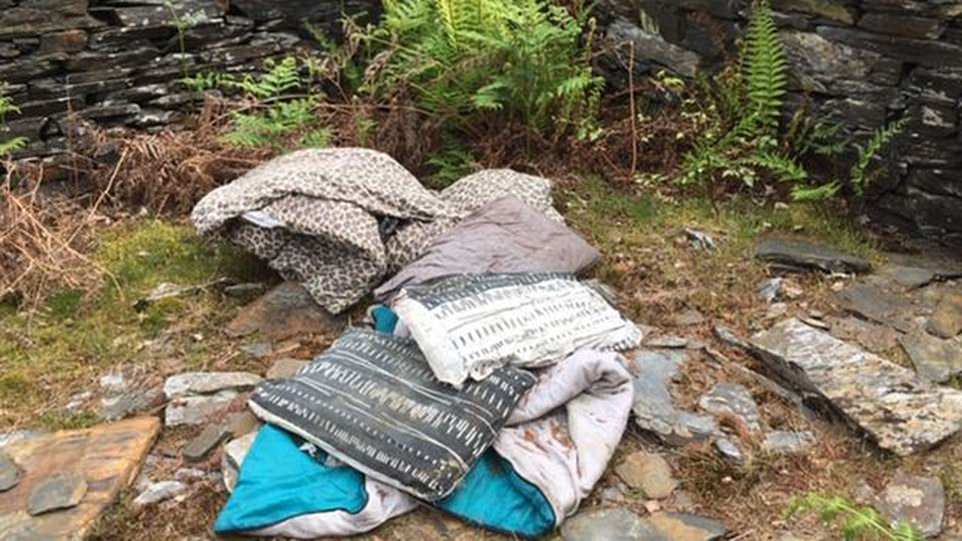 Fly-tipping at the site in North Wales drove Mr Titley to block off the entrance in a move that has disappointed locals. The 70-year-old claims that online popularity led to the ‘secret’ location becoming a dumping ground 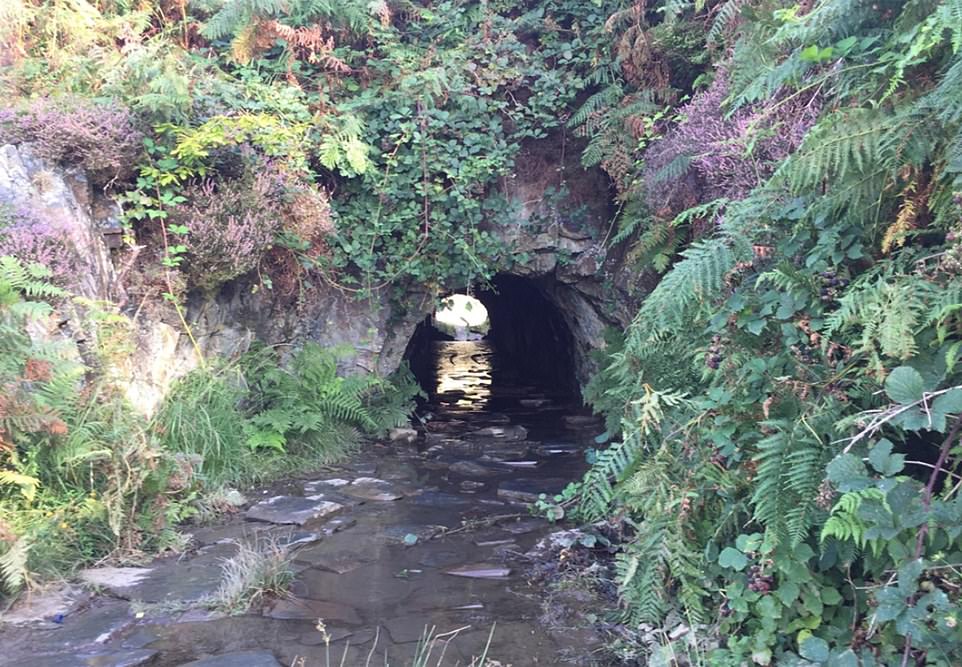 But he said the litter problem has become substantially worse due to publicity about the ‘secret’ site on social media. Hundreds of visitors have flocked to the swim or camp at the lake on summer weekends.

Mr Titley said although some tourists were responsible and picked up litter, it was mostly left to himself and local volunteers.

They were faced with a never-ending mess of abandoned barbecues, camping paraphernalia and even used condoms and human excrement. Bags of dog mess were put in bags but then tied to trees.

Mr Titley said: ‘Litter is everywhere now. In the whole of Wales, I don’t think there’s a beauty spot that hasn’t been trashed. 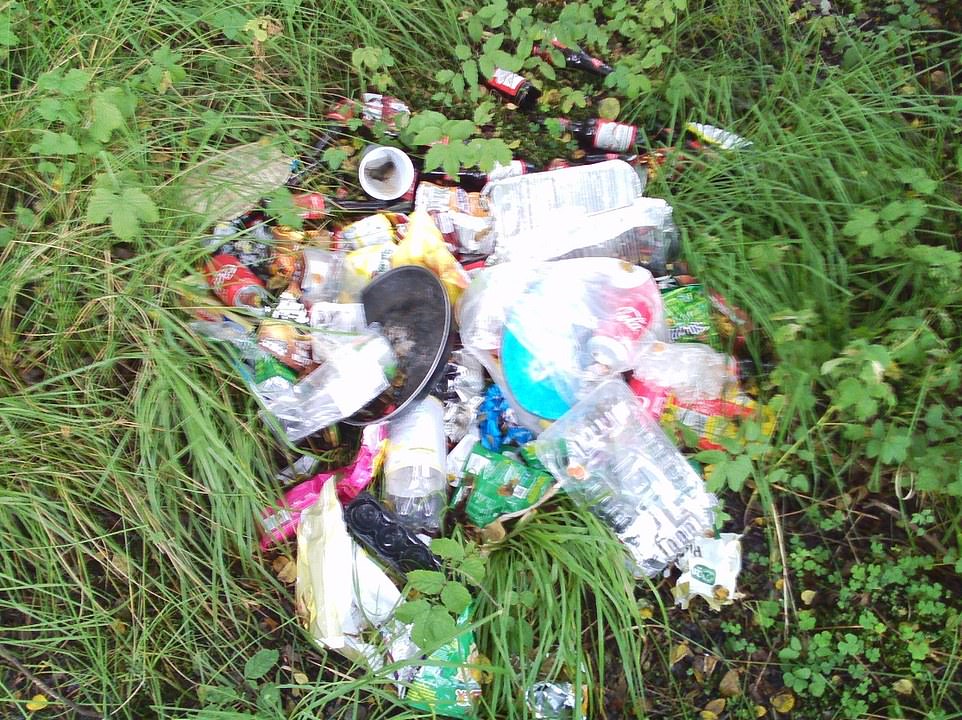 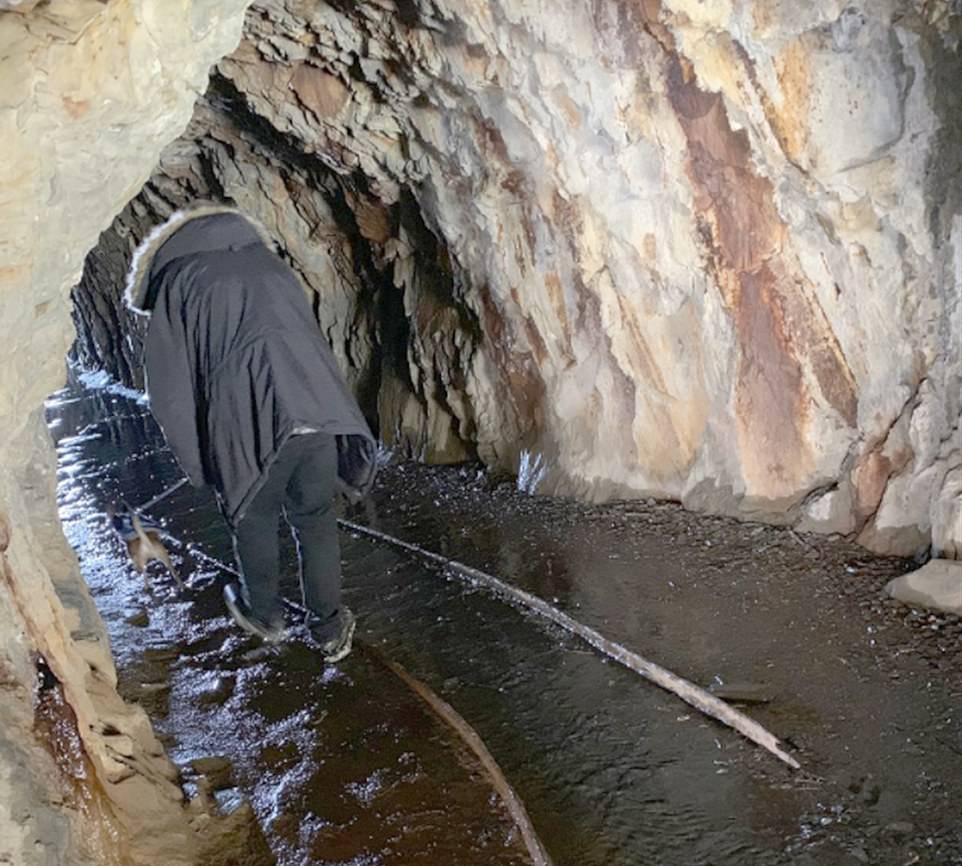 The 70-year-old (pictured using the entrance) has dumped slates over the opening after litter dumped at the site enraged him. Tourists will no longer be able to visit the location, which experienced a surge in popularity due to online reviews 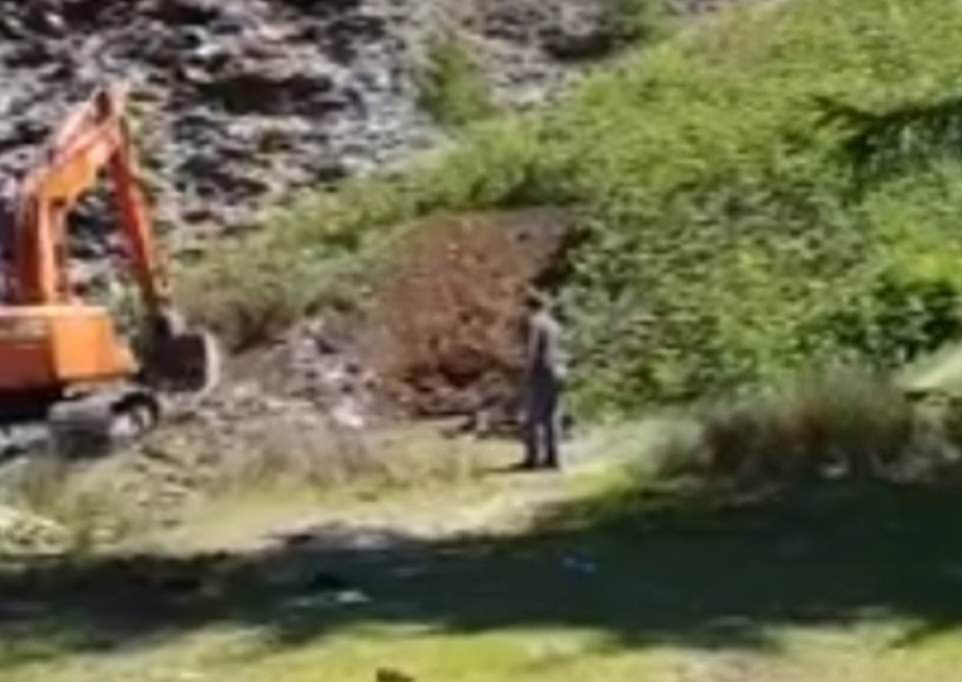 Pictured: A digger hauls slates across the entrance to the Blue Lake as its 70-year-old owner finally got sick of people throwing their rubbish on the floor 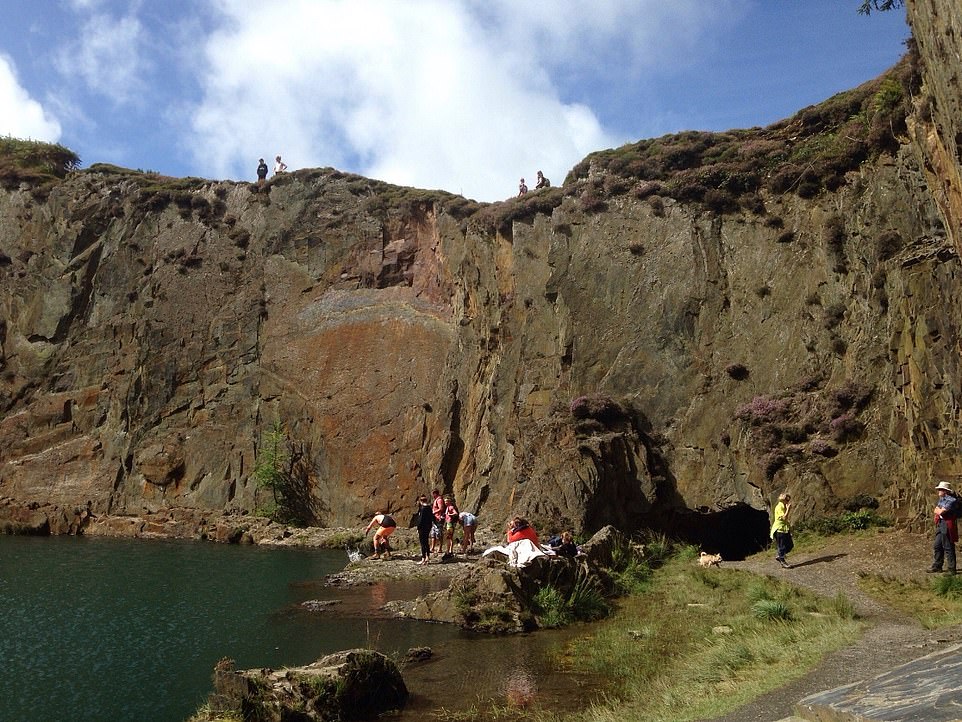 ‘We also have problems such as dogs chasing sheep. People have no education and just don’t care about the countryside.

‘I have never stopped anyone going to the lake before but in the past visitors used to respect it. In the past 10 years it has gradually got worse and worse.’

Mr Titley said he hopes the tunnel entrance to the lake will now become a habitat for bats. ‘It’s 35 to 40 yards long and would be the ideal location for them. I hope I’ve preserved the lake for future generations as a nature reserve,’ he added.

A letter from the local council earlier this year threatening to prosecute him for fly tipping over the rubbish proved the final straw.

After it emerged the quarry had been sealed off, scores of tourists took to social media with their memories of previous visits to the beauty spot

The council sent Mr Titley the notice because he, as landowner, is deemed legally responsible for rubbish at the site.

He said: ‘I was threatened with court action for fly tipping four or five months ago by trading standards because they couldn’t find out who had dropped the rubbish and it was on my land. That was the last straw. I cleaned it up myself.’

Last week, the farmer decided ‘enough is enough’ and decided to fill in the access tunnel. He said: ‘Thirty years ago they respected the place. It is a beautiful beauty spot and it has just been trashed. It’s private land in the middle of my farm. They are destroying the land.’

After it emerged the entrance had been sealed off, tourists took to social media to share their memories of visits to the beauty spot.

Helen Woodley wrote: ‘I remember asking mum and dad to drive home from Fairbourne beach to our caravan via the lake on many occasions on our childhood holidays more than thirty years ago. 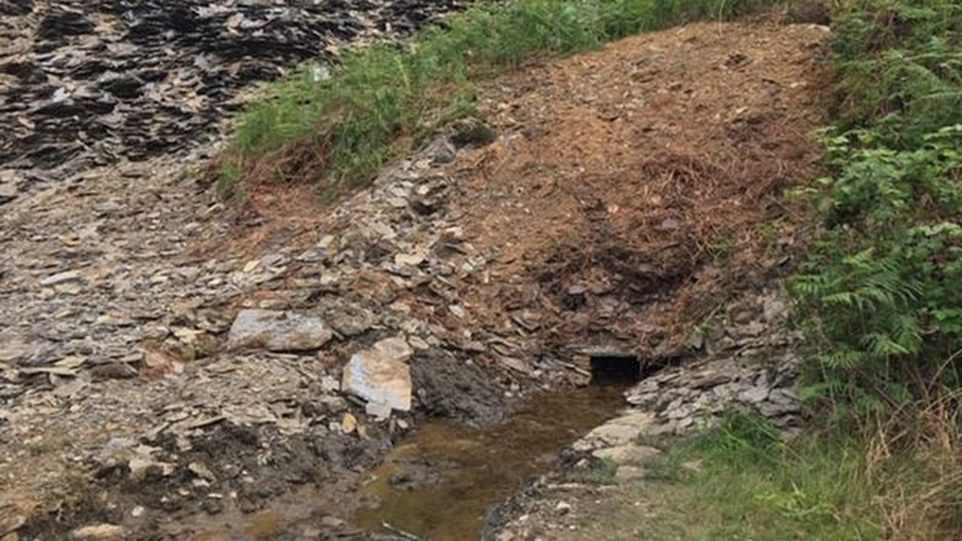 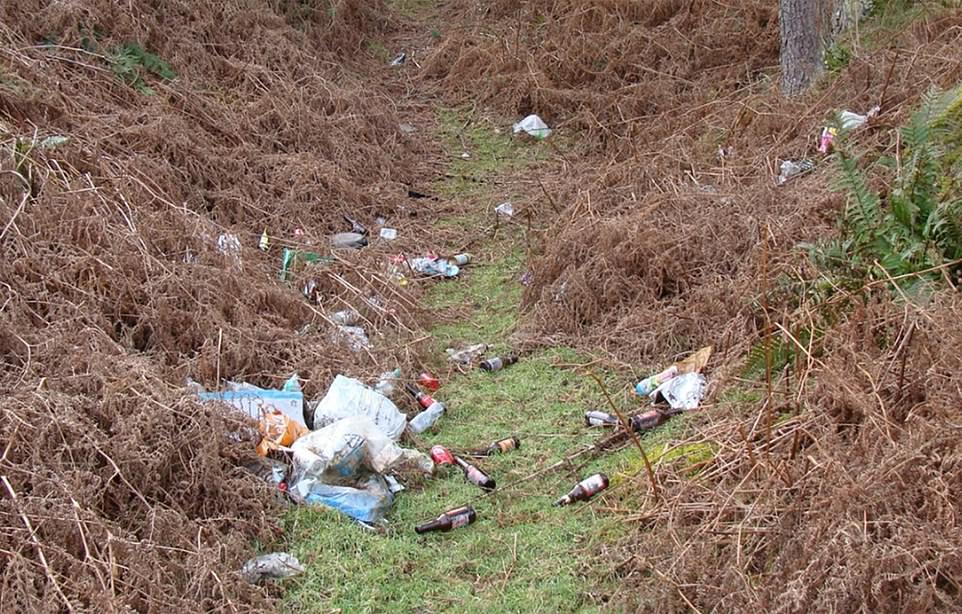 Beer bottles are strewn across the site in Friog (pictured). Mr Titler says that 40 bags of dog excrement, dirty nappies and a tent were also found there 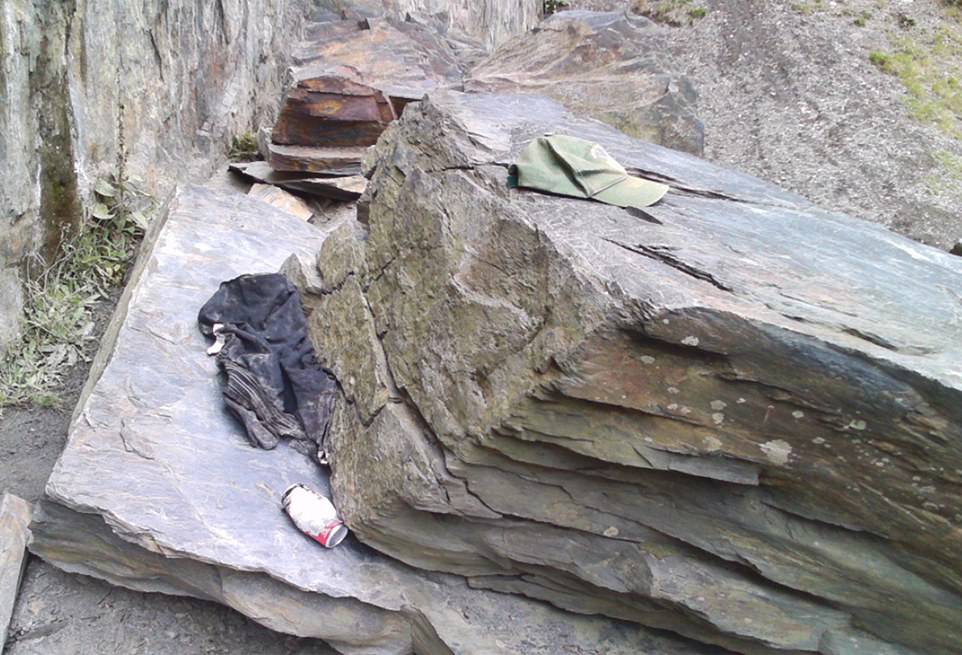 Beer cans and clothing are discarded at the site, which was the only entrance to the Blue Lake before the 70-year-old took the step of sealing it off

‘Why does the current throw away, self indulgent society feel that it is appropriate to visit somewhere beautiful and leave their s*** for someone else to dispose of?’

Anne Cotgreave added: ‘So sad about this. I taught my son to skim stones on our first visit to the Blue Lake, back in the last century. One of my most special places…’

Mr Titley said he had been overwhelmed with support since making his stand against the litter louts. ‘I’ve had 95 per cent of people who have talked to me about it saying, ‘I don’t blame you’, because they have walked up there and seen the mess first-hand,’ he said. ‘There’s been a tremendous amount of people backing me. They say my hands were forced.’

Leigh Pocock, 20, a student living nearby who regularly visited the lake to swim and walk, told how its closure was ‘quite gutting’. But he said: ‘It was bound to happen. Tourists ruined it.’

A spokesman for Wild Swim Snowdonia, whose members used the old quarry, said: ‘We understand the farmer has reached the end of his tether and we don’t blame him for that and respect his decision.’

Louise Hughes, a local councillor, said about 40 bags of rubbish had been removed from the ‘astonishingly beautiful’ site in recent weeks.

She said some visitors had ‘no regard for the environment’, adding: ‘It’s got steadily worse. Social media hasn’t helped.’