Landowners across UK to turn their stately homes, farms and even racecourses into pop-up campsites

Hundreds of temporary camping sites could be set up across the UK this summer as holidaymakers prepare to ditch trips abroad in favour of a Great British getaway.

Tourism chiefs say demand for camp sites and UK holiday homes for this summer has boomed – with Britons cautious about foreign holidays due to the possibility of Covid travel restrictions.

Now grounds of stately homes, farms and racecourses could be turned into makeshift camping spots to meet the ‘astronomical demand’ for staycations.

More than 500 temporary sites are expected to open around the UK, according to the Times.

The spike in demand comes as Boris Johnson is today set to announce a new ‘traffic light’ system for foreign travel – giving Britons hope of a return to European beaches.

Speaking about the law change, Dan Yates, managing director and founder of camping booking site Pitchup, which last year handled one million bookings, told the Times: ‘For many landowners 28 days is not viable. 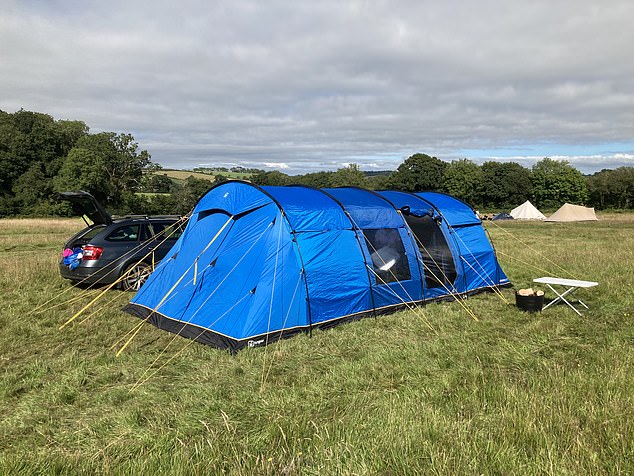 Top-tips for camping in the UK

Here are some of the top-tips for camping:

Make sure you can assemble your tent before you go. Wind and rain can make tents trickier to assemble so it is worth practising if you have not used it before. This can also help to ensure you have all of the pieces you need.

It can get surprisingly cold, even on summer nights in the UK, and a good sleeping bag can make the difference. Make sure you check which type of sleeping bag you are using. A season one is ideally for temperatures 5C or above, while a season two will typically cover you down to 0C. A season three  will cover you down to -5C – but might get warm on hot summer nights.

The British summer is always unpredictable – and a nice day can quickly turn into a wash out. Bring waterproofs – even if the forecast is good – and keep them away and other items away from the edges of your tent as water can soak through. Wet bags are also a good idea.

Bring your own toilet roll

Your camp site will have water and toilet facilities – some more sophisticated than others – and you can always approach the site manager or landlowner if you find the toilets lacking in loo roll. But bringing your own spare is a smart little trick to make sure you are never caught short.

It seems self-explanatory, but litter can have an impact on local wildlife. Bring a plastic bag and put it in the campsites main bin, a public bin or take it home with you. 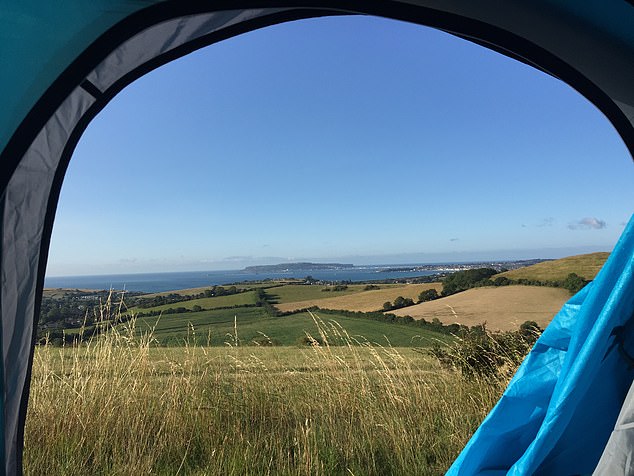 More than 500 temporary sites (such as this one pictured in Dorset) are expected to open around the UK, according to the Times 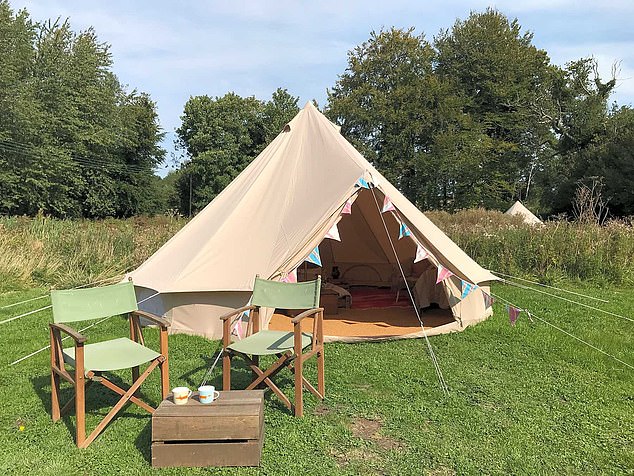 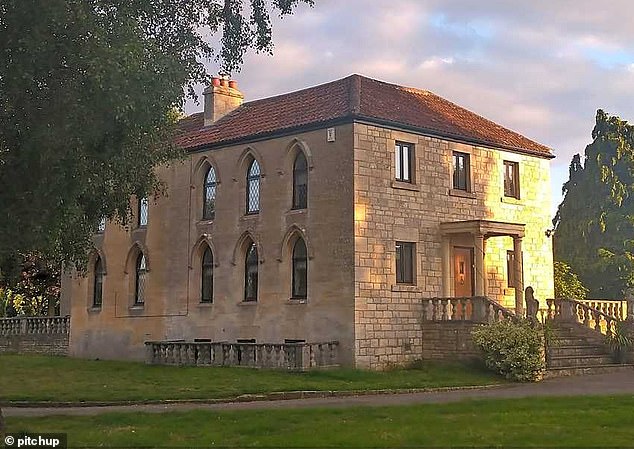 Now grounds of stately homes (pictured: Such as Longscroft Manor), farms and racecourses could be turned into makeshift camping spots to meet the ‘astronomical demand’ for staycations

‘Having two months, which means being able to operate for the whole of the school holidays, is a gamechanger.’

The Chequers Inn – Isle Of Wight

Mr Yates said there were a record 200 pop-up camp sites created last year, despite them only being able to open from July 4 due to last year’s Covid lockdown.

‘This year will far surpass that number,’ Mr Yates predicted.

Alongside campsites, UK hotels, cottages and B&Bs have all reported a surge in bookings since February.

Earlier this month the Mail reported how some trips to the seaside have doubled in cost this year.

Euphoria around the rollout of vaccinations has triggered a staycation rush, which means letting websites and property owners are cashing in.

Research by Which? looking at popular destinations, from St Ives to Whitby, Llandudno and Brighton, found prices in the summer are an average 35 per cent higher.

Based on prices listed with the letting sites Airbnb and Vrbo, it found one example that was 70 per cent more expensive and another was some 140per cent higher this year.

The Which? research echoes evidence of price rises of 25 to 100per cent being imposed by specialist holiday cottage websites published by the Daily Mail last week.

The largest mark-up was for a one-bedroom maisonette in Brighton on Airbnb, which has gone up from £53 a night to £127 – a rise of 140 per cent. 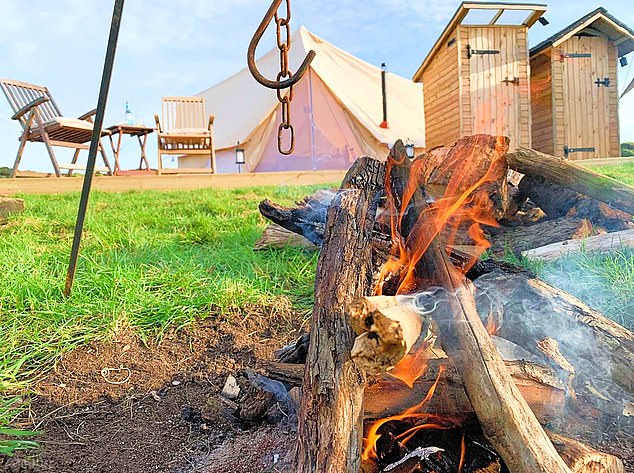 Now grounds of stately homes, farms and racecourses could be turned into makeshift camping spots to meet the ‘astronomical demand’ for staycation sites 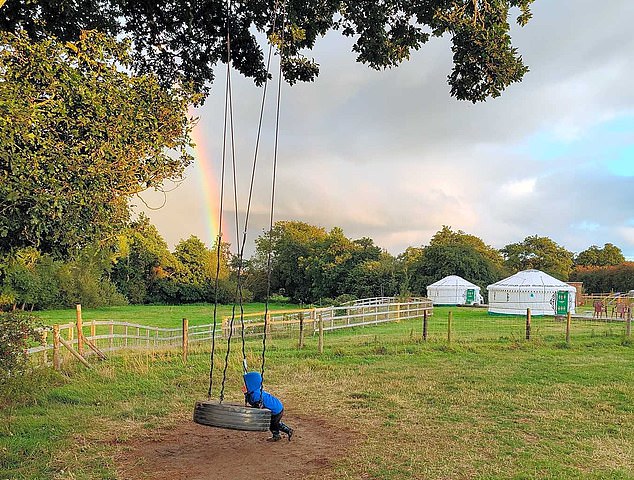 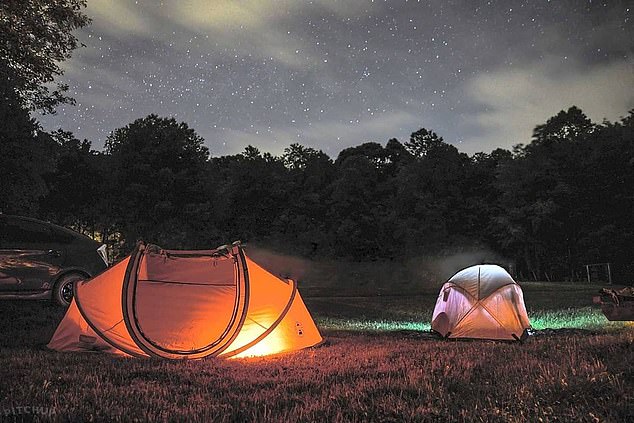 Alongside campsites, UK hotels, cottages and B&Bs have all reported a surge in bookings since February

It also found a 70 per cent increase in price for a one-bedroom property in the centre of Eastbourne on Airbnb. Last year, a one-week holiday in the first week of August would have cost £409, but this year the same week is £696.

On Vrbo, a one-bedroom property in Bournemouth rose from £722 for the first week of August last year to £958 this year – an increase of 33 per cent.

Other price rises were more modest, for example, a one-bedroom cottage on Airbnb in Scarborough increased by seven per cent for similar August dates this year.

The phased end to lockdown means a household will be able to book a self-catering staycation from April 12.

However, no booking that involves more than one household, for example a family plus grandparents, will be allowed until May 17.

Meanwhile, Britons will be allowed to holiday in countries with high vaccination rates this summer, Boris Johnson will say later today, as he unveils a traffic light system which will see destinations rated as red, amber and green.

The Prime Minister will unveil a traffic light system that will see destinations rated as red, amber and green 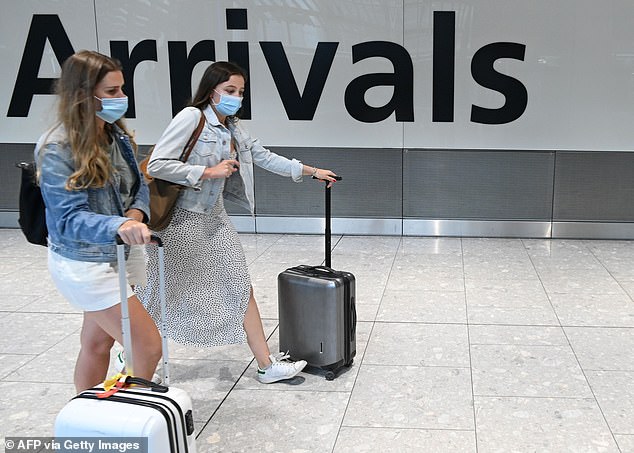 Britons will be allowed to holiday in countries with high vaccination rates this summer, Boris Johnson will say today (File image)

Government sources said they will categorise countries using criteria including the percentage of the population that has been vaccinated, the rate of infection, any emerging variants and the country’s access to reliable data and genomic sequencing.

The criteria could result in European countries like France and Italy being ruled out of bounds for British holidaymakers in the coming months as parts of the EU suffer spikes in coronavirus cases and the bloc’s vaccination drive continues to stall.

Under the Government’s scheme, sunseekers returning from countries in the green category will not have to isolate, although they will need to have tests before and after they fly.

Those coming back from red list countries would have to quarantine in a hotel for ten days, while arrivals from amber destinations will have to isolate at home.

The Prime Minister will re-affirm May 17 will be the earliest that foreign holidays can resume and the new system comes into effect. But he will say he is unable to advise yet whether any countries will be classed as green on this date.

Health Minister Edward Argar today said an increase in cases in Europe showed why the UK must ‘get this right’ in order to avoid importing potentially vaccine-busting variants of the disease.

He told BBC Breakfast: ‘We are seeing many of our friends in Europe seeing an increase in infections.

‘That is one of the reasons why we have to be very careful that as we see an increase across the world in infections that we get this right because one of the things we don’t want to see – and just as the vaccination programme is working so well – is getting new variants or risking new variants getting imported into this country. 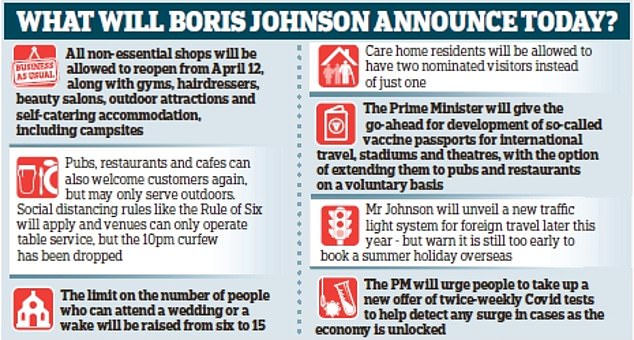 At a press conference this evening, the Prime Minister will confirm the next stage of the release from lockdown is on schedule – with shops, gyms and hairdressers allowed to reopen from next week 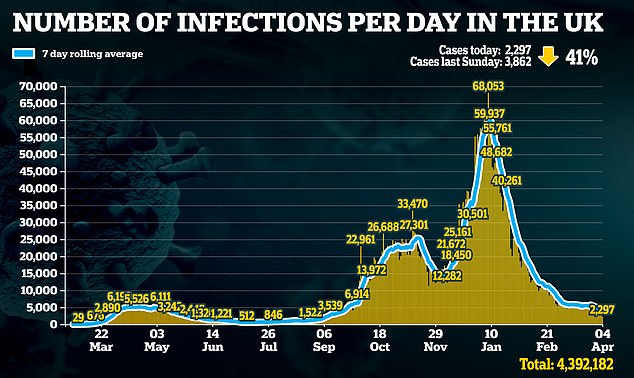 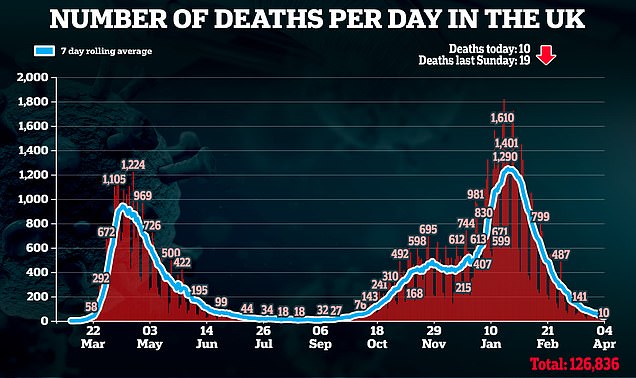 ‘But, although tempting as it is, I’m not going to pre-empt which countries might be in which categories or what the Prime Minister might say.’

Meanwhile, leading scientific adviser Professor Neil Ferguson said testing everyone coming from Europe, with no exemptions, would be ‘sensible’ to protect against importing variants.

The Imperial College London academic told BBC Radio 4’s Today programme: ‘I think the key thing is the risk of importing variants which might undermine our vaccination programme and the one we’re particularly concerned about at the moment is the South African variant called B.1.351.

‘The concern here… is the proportion of cases reported in a number of European countries which are this variant is now up to anywhere from 4-5% in France and up to 17%, nearly 20% up in Luxembourg.

‘So rather than some of the ‘red list’ countries which are far away, I think where the real policy challenge lies in terms of mitigating risk is around what to do around travel to Europe and back.

‘I think that (testing everyone from European countries) would be sensible and reconsidering the exemptions in place at the moment.

‘At the moment, there is a very long list of exemptions for jobs and professions – if you’re a truck driver or travelling on Government business, then you don’t have to quarantine and you don’t have to even test. I think it would be sensible for at least everyone to be tested when they are coming in.’