The chief of Los Angeles Police Department is facing calls for his resignation after he said George Floyd’s death is on the hands of looters as much as it’s on the Minnesota officer who pinned him to the cement and kneeled on his neck and the other three cops who stood by and did nothing.

LAPD chief Michel Moore made the comments during a press conference with Los Angeles Mayor Eric Garcetti on Monday.

Moore said officers made 700 arrests Sunday night and of those arrests 70 people had been burglarizing or looting businesses.

‘So what that tells me is that two things: We didn’t have protests last night, we had criminal acts. We didn’t have people mourning the death of this man, George Floyd. We had people capitalizing,’ Moore said.

Garcetti then went up to speak and following him Moore took the podium once again, claiming ‘misspoke’ about Floyd’s death. 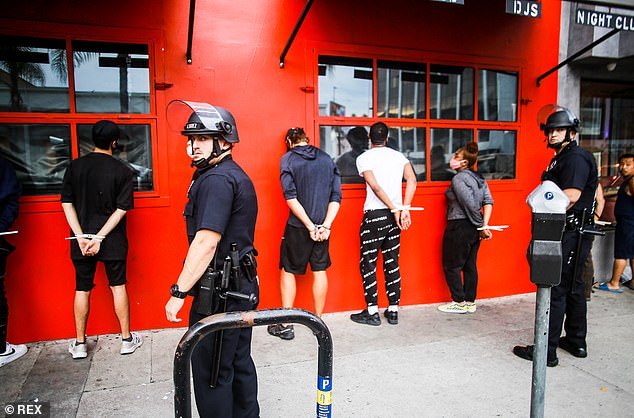 ‘We didn’t have protests last night, we had criminal acts (looters pictured). We didn’t have people mourning the death of this man, George Floyd. We had people capitalizing,’ Moore said. ‘His death is on their hands as much as it is those officers,’ the chief added 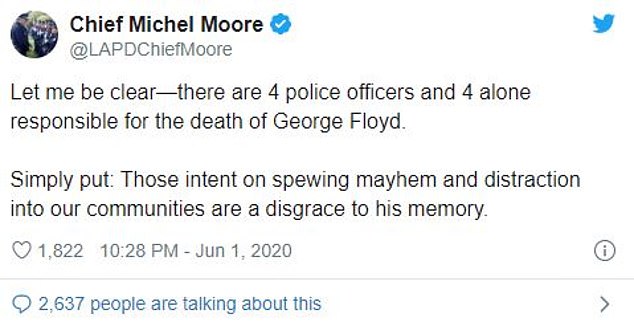 ‘His death a week ago in looking at the video that I seen… was at the hands of the police officer and the officers who stood by. What I saw there wasn’t right.

‘I misspoke when I said his blood was on their hands, but certainly their actions do not serve the enormity of his loss and cannot be in his memory,’ Moore said.

‘What his name should stand for is the catalyst for change. I regret the remarks of that characterization, but I don’t regret, nor will I apologize to those out there creating destruction. His memory deserves better.’

Following the press conference, both Moore and Garcetti tweeted about the statement.

Following the press conference, Garcetti also tweeted about the statement 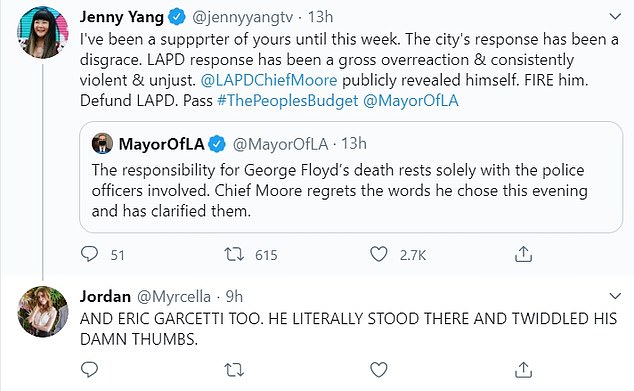 ‘Let me be clear—there are 4 police officers and 4 alone responsible for the death of George Floyd,’ Moore wrote.

‘Simply put: Those intent on spewing mayhem and distraction into our communities are a disgrace to his memory.’

‘My Apology for Remark Regarding the Death of George Floyd During a Press Conference Earlier Today: I misspoke when making a statement about those engaging in violent acts following the murder of George Floyd,’ Moore wrote.

‘While I did immediately correct myself, I recognize that the initial words were terribly offensive. Looting is wrong, but it is not the equivalent of murder and I did not mean to equate the two.

‘I deeply regret and humbly apologize for my characterization.

‘Let me be clear: the police officers involved were responsible for the death of George Floyd,’ Moore said. 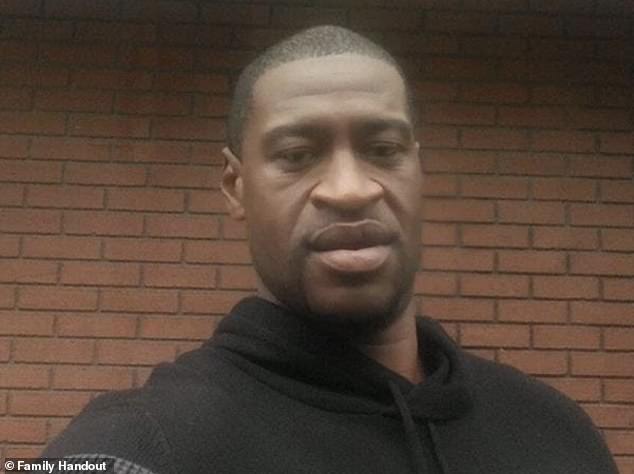 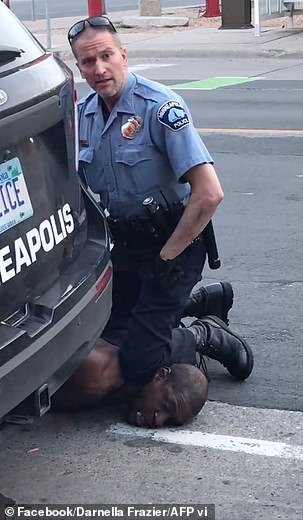 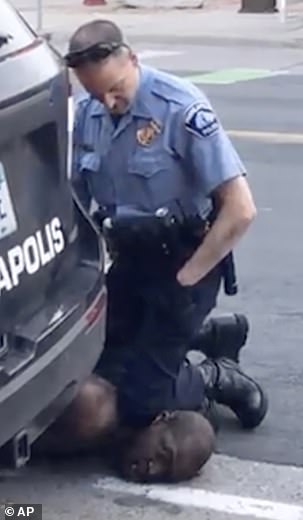 Chauvin, who has since been arrested, was seen in footage kneeling on Floyd’s neck for eight minutes as the victim repeatedly said he could not breathe (incident pictured)

Garcetti then shared: ‘The responsibility for George Floyd’s death rests solely with the police officers involved. Chief Moore regrets the words he chose this evening and has clarified them.’

But it appeared that Moore’s apology wasn’t enough with several people taking to Twitter to express their outrage and call for the chief to be fired.

‘Mayor Garcetti. Sir, you have no choice here. Chief Moore cannot take back what he said. He has demonstrated, through his own words, that he is UNFIT to be Chief of LAPD. You must fire him immediately!’ one user tweeted.

Another wrote: ‘Eric Garcetti @MayorofLA FIRE Moore or you’ll be forcibly removed from office. This is not a threat, but a promise. Your move.’

‘Mayor Garcetti: Clarification isn’t needed. #ChiefMoore knew what he said about #GeorgeFloyd and meant it. He needs to go,’ a third person wrote. 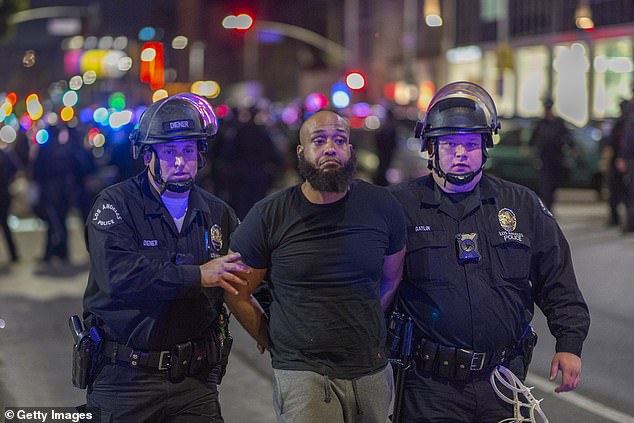 Thousands of people have been protesting Floyd’s death for the past week. Protesters and motorists are surrounded by police and arrested as large numbers of people are rounded up after a curfew went into effect during demonstrations on Monday in Los Angeles 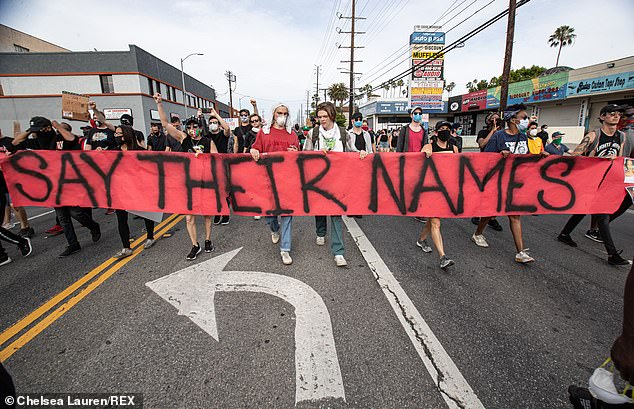 As of Tuesday morning, more than 4,000 people had signed a Change.org petition calling for Moore to resign.

Floyd, 46, was killed on Memorial Day after white Minneapolis police officer, Derek Chauvin, 44, pressed his knee into his neck as Floyd pleaded that he couldn’t breathe.

Chauvin was arrested and charged on Friday with third-degree murder.

On Monday, Minnesota’s attorney general, Keith Ellison, said he is ‘very seriously’ looking at prosecuting the other three officers who were at the scene when Chauvin kneeled on Floyd’s neck and promised to ‘bear all the resources necessary to achieve justice’.