The 34-year-old, who welcomed her first child with husband Eric, 33, on Tuesday morning, discusses the devastating effects of Hurricane Irma and Hurricane Harvey in the two-minute clip, before offering a message of hope to all of those affected by the natural disasters.

Her latest video appearance for the President was released at the same time as her husband Eric took to social media to share yet another adorable image of his son. 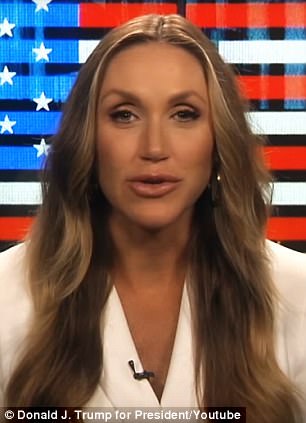 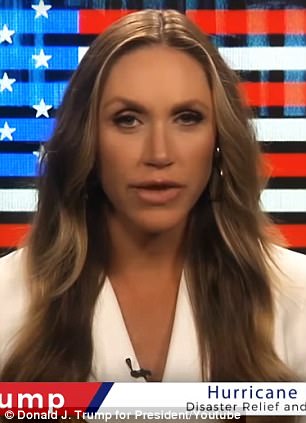 No rest for the wicked! The 34-year-old appeared in the clip to offer victims of Hurricane Irma and Hurricane Harvey a message of hope and support 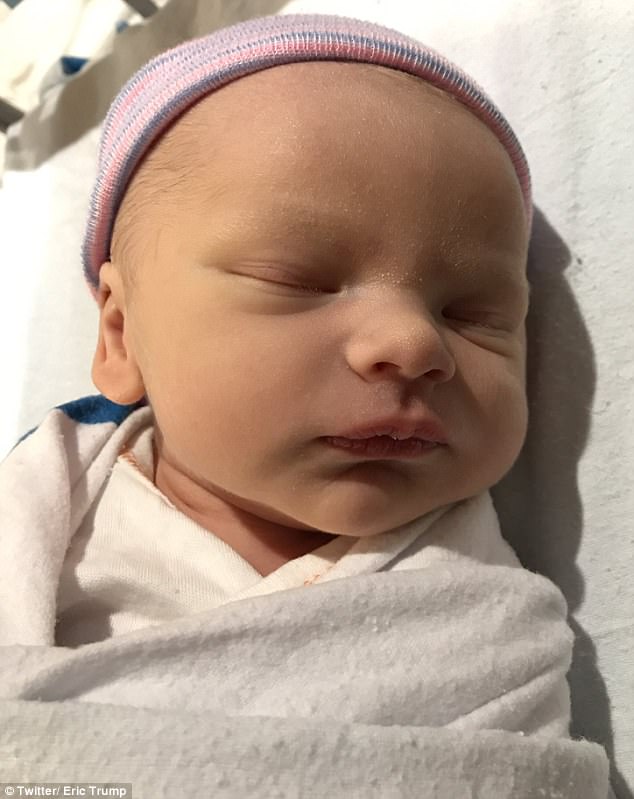 Baby boy: As Lara’s new video was posted, her husband Eric, 33, took to Twitter so share the latest in a line of adorable images of the couple’s newborn son, Eric ‘Luke’ Trump 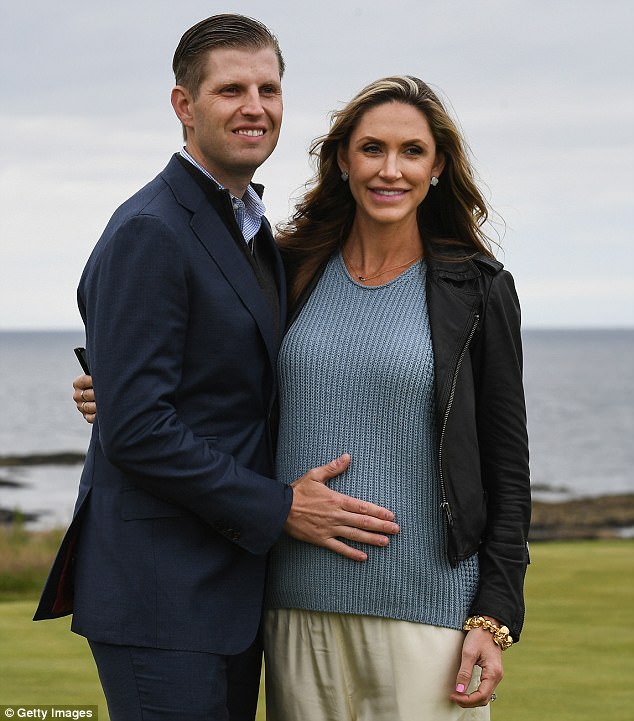 Happy family! The couple’s newborn baby is the ninth grandchild for President Trump

Posting on Twitter less than 24 hours after the baby boy, named Eric ‘Luke’ Trump, was born, Eric shared the latest in a series of sweet candid snaps of the newborn, capturing his son asleep while wrapped up tightly in a hospital issue blanket.

He added the hashtag #LittleLuke to the post, along with three American flag emoji.

It is the fourth image that the doting dad has released of his child since the birth, having posted the very first public picture of baby Luke on Twitter just hours after his arrival.

Shortly after noon on Tuesday, Eric took Twitter to share the joyous news of his baby’s birth, revealing that his son had been welcomed into the world at 8.50am that morning.

‘@LaraLeaTrump and I are excited to announce the birth of our son, Eric “Luke” Trump at 8:50 this morning,’ he wrote.

In the picture posted alongside the tweet, the tiny newborn appears to be sleeping soundly in his mother’s arms, with just her hospital gown visible in the background.

The image showed the little boy looking snug in the same blue, pink, and white hospital blanket, with a pink and blue woven cap on his head.

He then shared a second picture of his child on Instagram, this time a black-and-white photo which captured himself cradling baby Luke and dropping a sweet kiss on his forehead.

A third image of the baby boy, once again captioned simply with the hashtag #LittleLuke, was posted on his Instagram just hours later, once again capturing the sleep babe lying in his hospital bed. 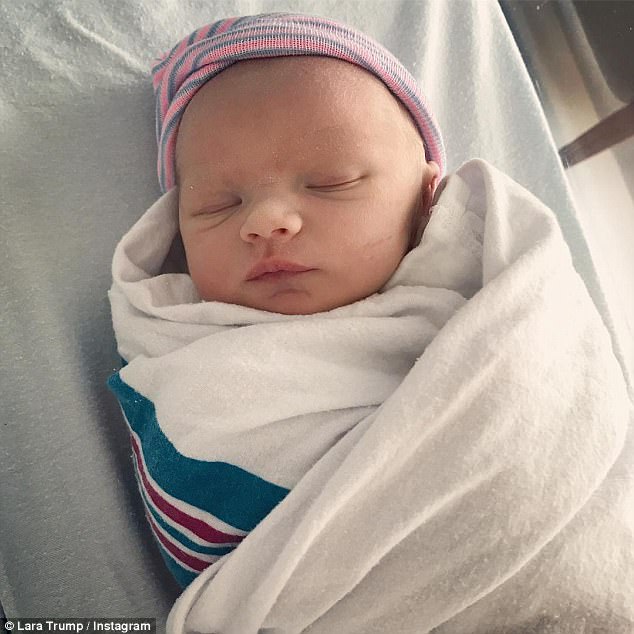 Adorable: Lara also shared her joy at giving birth to a baby boy, Eric ‘Luke’, online while posting her very own image of the tiny tot 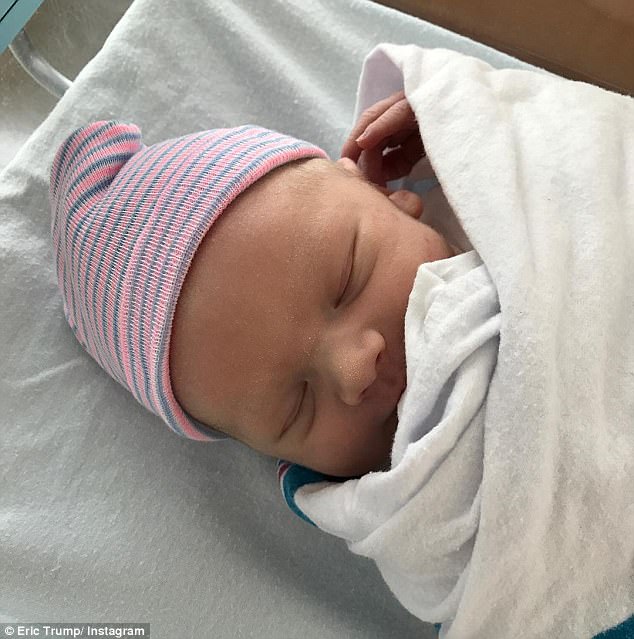 Picture-perfect: New dad Eric also took to Instagram to share another picture of his son, having shared the news about his birth online earlier in the day 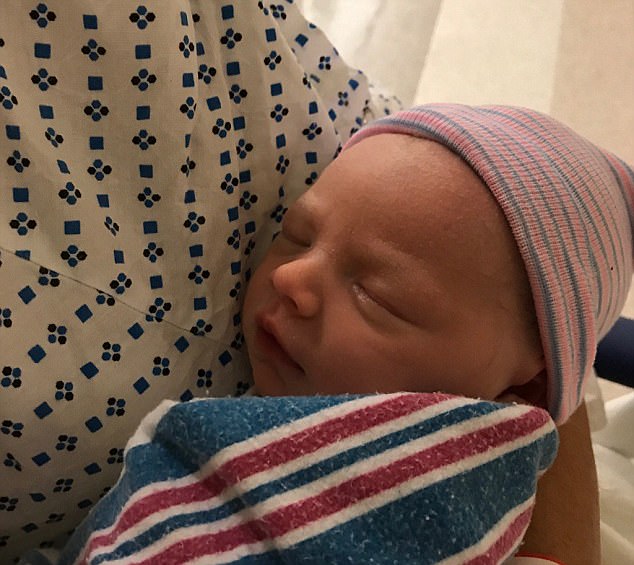 Lara made sure to share her own post on social media later on in the day, taking to Instagram to express her joy at becoming a mother for the first time.

‘Happy birthday, Luke!’ she captioned her Instagram image, before adding: ‘We are so blessed and proud to be your parents!!’

Despite confessing in the lead-up to her child’s birth that she was getting more and more eager for his arrival, Lara didn’t let her pregnancy get in the way of fulfilling her role as a host of President Trump’s official campaign videos.

Lara was offered the role back in August, and has since been appearing in regular video posts on Facebook to share with viewers a weekly recap of Trump’s various accomplishments – or ‘wins’ – from the past seven days.

Her latest clip, however, saw her tackle a much more serious topic – the disastrous impact of Hurricane Irma and Hurricane Harvey.

In a video posted to the official Donald J. Trump for President YouTube channel, Lara can be seen sitting in front of an American flag backdrop, looking every inch the budding news anchor in a white suit jacket.

The clip was shared on the channel on Wednesday morning, and is thought to have been filmed just days earlier – likely within just a few days of days of Lara giving birth.

‘As we reflect on the anniversary of 9/11 this week, and all of those lost on that day of evil attacks on our freedoms, we are reminded of the tests of our resolve in our nation’s history, and the ways that we always ultimately unite as one America,’ she says at the start of the video.

Proud: The son of President Donald Trump happily shared the news on Twitter just a few hours after Lara gave birth to their son 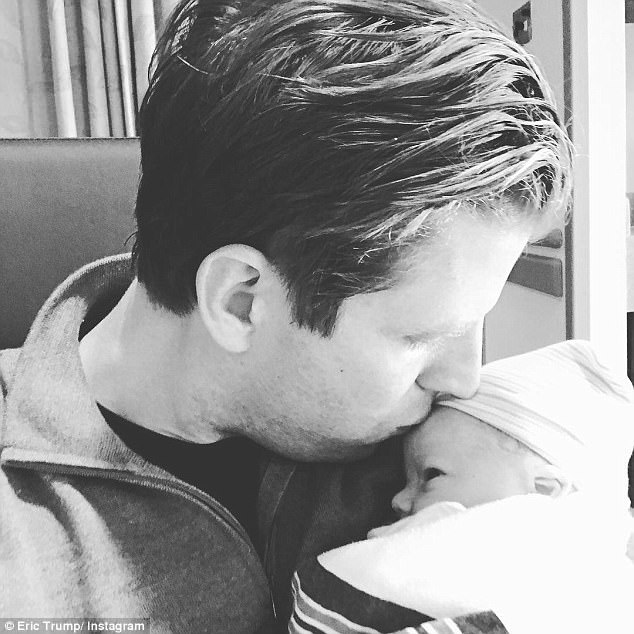 Father and child: The doting dad posted this black-and-white picture of himself with his newborn son on Instagram

Excited! Eric’s father took to Twitter a few hours after the announcement to share his joy at the happy news

‘Such a test is underway right now, as more of our fellow Americans are battling Hurricane Irma and its aftermath, while others are recovering from Hurricane Harvey.’

As images of Trump offering food to victims of the hurricanes appear on screen, she continues: ‘In times such as these we see the strength and the resolve of the American spirit, and we see the kindness and courage of people nationwide.

‘In Texas, Louisiana, Florida, Puerto Rico, the US Virgin Islands, and everywhere in between, we have this message for you: We are here for you, with prayers, financial assistance, volunteer work, and a fervent commitment to help you recover, repair, and come back stronger than ever before.’

She then continues to remind people that ‘President Trump, his cabinet, and his entire administration are working closely with state and local officials and private sector organizations to help save lives, protect families, and assist those in need’.

Finally, Lara informs people how they can help to donate money and supplies to charities that are helping victims of the hurricanes, and how those affected by the natural disasters can seek help.

The arrival of Lara and Eric’s first child no doubt came as a welcome piece of happy news in the White House, which has been hit hard by both hurricanes and the impact that they had on victims.

President Trump certainly seemed overjoyed at the news, as he took to Twitter on Tuesday, several hours after his ninth grandchild’s arrival, to share his congratulations with the happy couple.

‘Congratulations to Eric & Lara on the birth of their son, Eric “Luke” Trump this morning!’ he wrote on his official account, while retweeting his son’s original post. 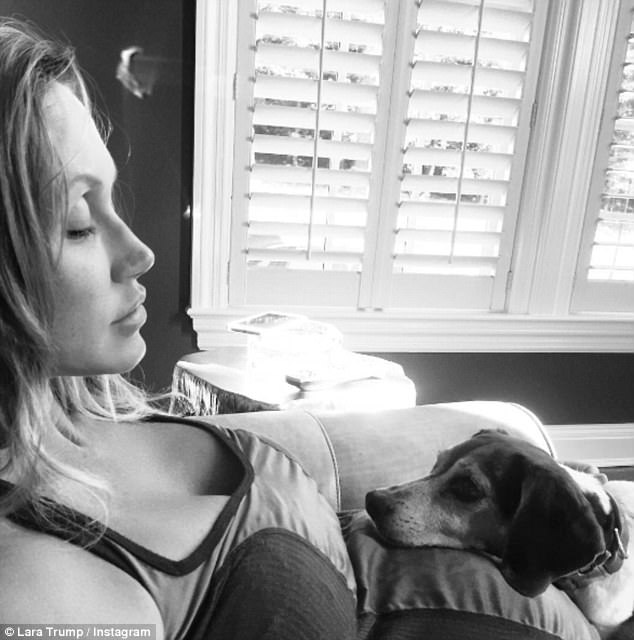 Ready to go! Lara posted this image of herself and her dog Charlie last week while she awaited the birth of her child 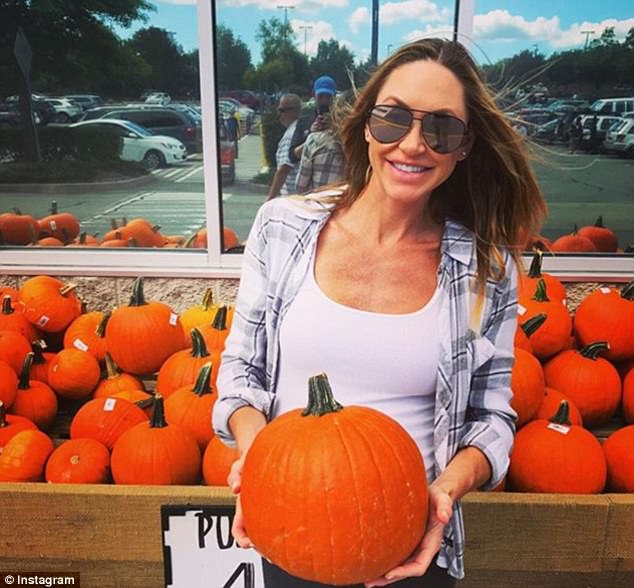 Ready for fall: Lara has remained active on social media throughout her pregnancy, and just a couple of days ago she shared this photo and joked that she ‘fits right in at a pumpkin patch’

‘Welcome to the world, baby boy. I can’t wait to meet you,’ Ivanka wrote, while his older brother shared a more humorous sentiment.

‘Congrats buddy. Welcome to the club. Now that the niceties are out of the way it’s older brother revenge for that drum set to my kids,’ Don Jr. tweeted.

Donald’s wife Melania has yet to comment on the newest addition to their family.

Lara’s resolve to continue working right up until the birth will come as no surprise to anyone who follows her on Instagram.

Just last week, Lara was hitting the gym while 39-weeks pregnant in the hope of inducing pregnancy, taking to Instagram last Tuesday to share a video of herself using a weight to do a series of overhead tricep extensions and lunges.

‘Hoping the workout inspires this baby to make an appearance!’ she wrote, thanking her trainer Michael Maloney for his help.

Lara told Daily Mail Online in August that she has been ‘blessed with an incredibly easy pregnancy’ that has allowed her to remain fit and active throughout. 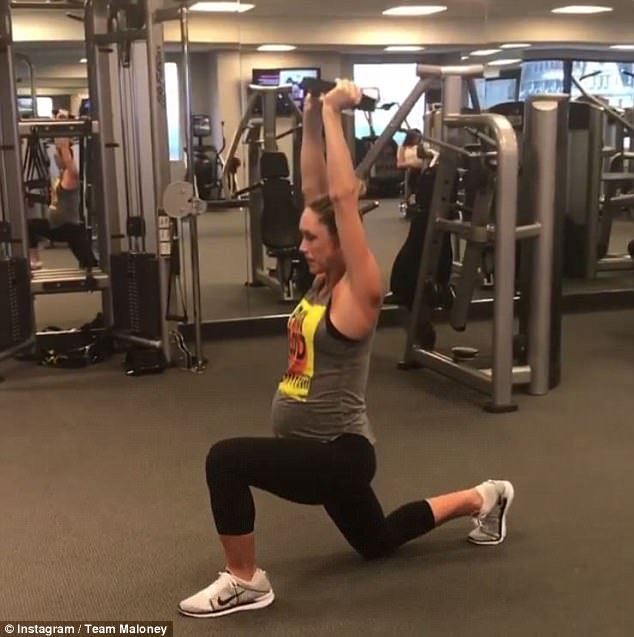 Keeping fit: Last Tuesday, exactly a week before giving birth, Lara shared a video of herself working out at 39-weeks pregnant 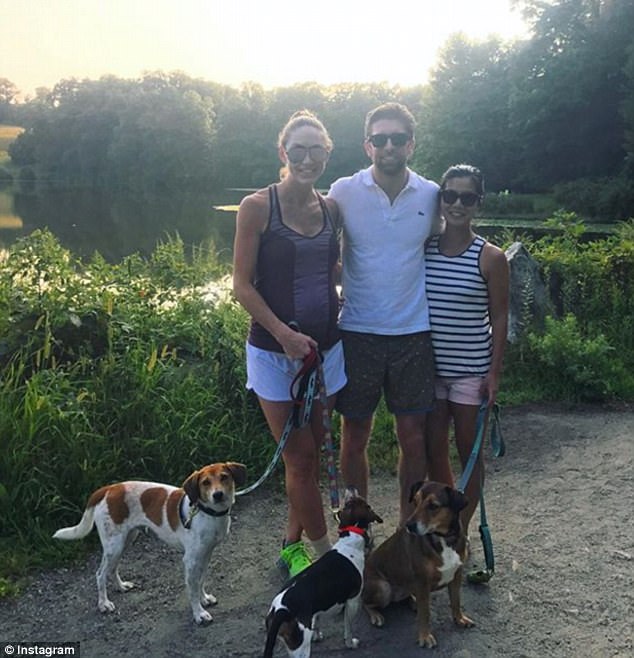 Almost there: Lara was still enjoying walks with her dogs in late August 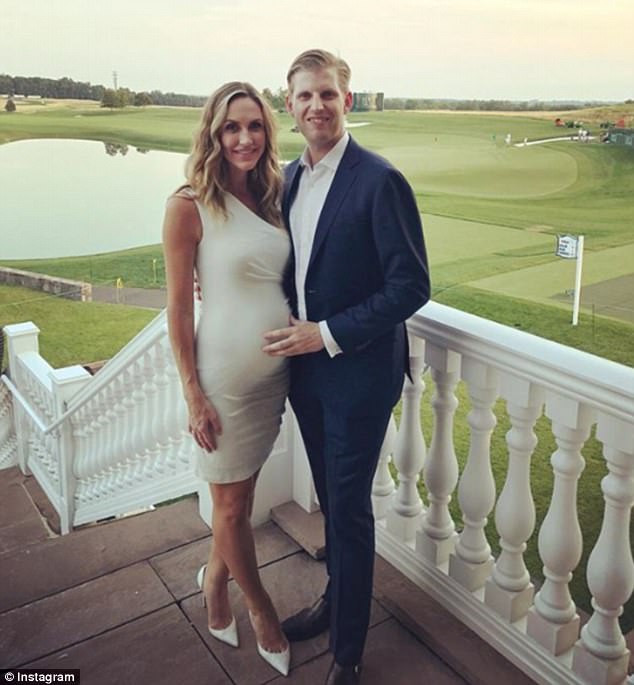 Getting ready: Lara revealed last month that Eric built their son’s crib himself 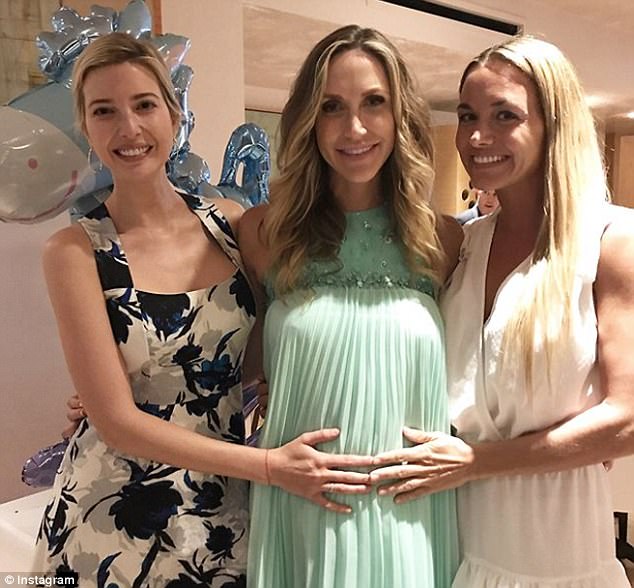 Support system: Lara also said that her two sisters-in-law with children, Ivanka and Vanessa, have been on-hand throughout her pregnancy to offer help and advice

‘I knew I needed to work out for my sanity, and I try and make it a daily habit if I can, so I count myself very lucky that I have been able to keep doing that while pregnant.’

But being able to stay active wasn’t the only thing that helped Lara throughout her pregnancy. She admitted last month that she had a great deal of support from Eric and both of their families, as she prepared to welcome her first child.

‘The nursery is coming along nicely, we’re nearly there with it, which is a huge weight off [mine and Eric’s] shoulders,’ she explained at the time. ‘Eric actually built the crib himself, he’s very handy!

‘We have a rocking chair for the nursery that was too wide to fit through the door, so he just took the door off the hinges. I was very impressed.’

Lara also said that her two sisters-in-law with children, Ivanka and Vanessa, have been on-hand throughout her pregnancy to offer help and advice whenever she has needed it.