Lara Trump gets visit from her son Luke at work

Lara Trump had a special visitor at work this week: her baby boy Luke.

The 35-year-old mom and her husband Eric Trump celebrated the 10 year anniversary of their first meeting with a trip to Aspen, Colorado, over the weekend, but she was back to her office in New York City on Monday.

Lara took to Instagram Stories to share an adorable video of Luke sitting on her lap while she plays with a Cupid-inspired filter. 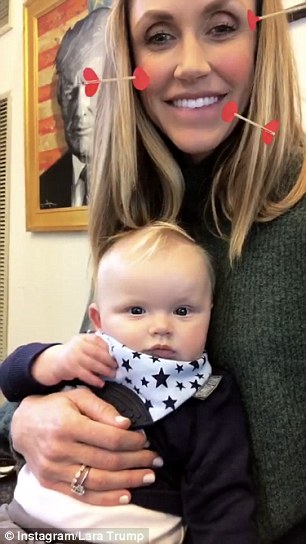 VIP: Lara Trump took to Instagram on Monday to share a video of herself enjoying a visit from her six-month-old son Luke 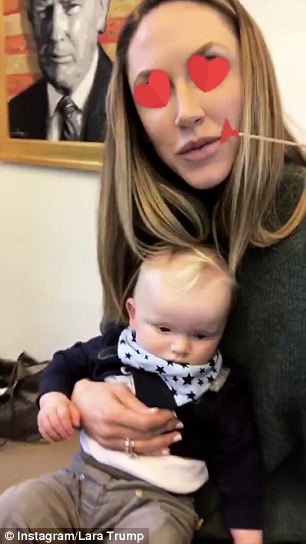 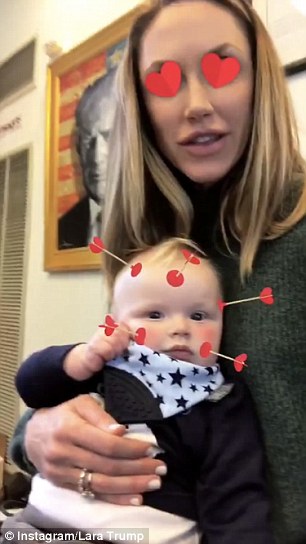 Tech savvy: In the clip, little Luke is gazing at the camera while his mom plays with a Cupid-inspired filter

The clip shows Luke gazing at the camera while arrows shoot at his cheeks and his eyes are covered by red hearts.

‘Oh look there,’ Lara tells Luke. ‘Look what happens when you come visit me at the office.’

Lara and Luke are sitting right in front of a portrait of a her father-in-law, President Donald Trump, which is hanging in her office.

In the background there is also a framed photo of Eric and his siblings propped up against the wall, as it has yet to be hung.

Before heading back to work, Lara and Eric, 34, traveled to Aspen with their son for a long weekend to celebrate 10 years together. 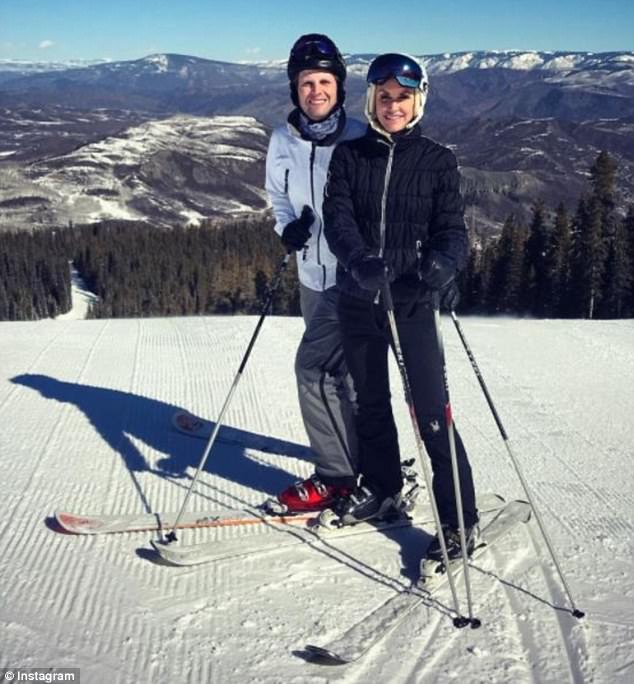 Look of love: Lara and her husband Eric Trump took Luke to Aspen, Colorado, last week to celebrate the 10 year anniversary of their first meeting. They are pictured skiing on Saturday 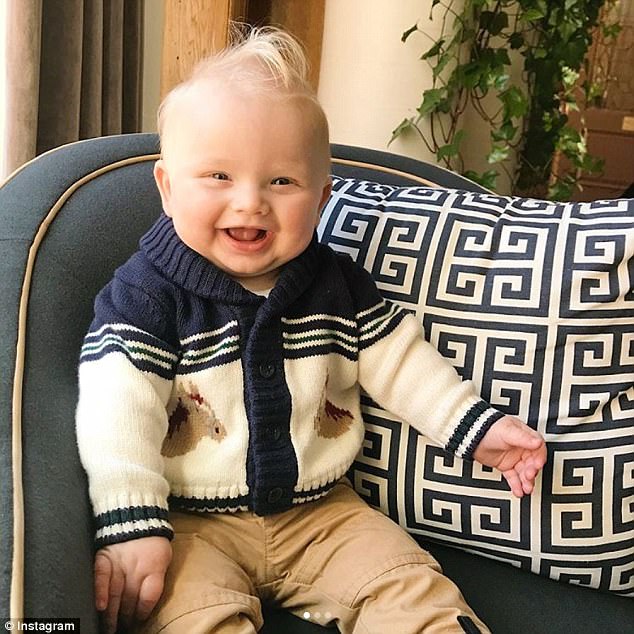 All smiles: Lara also posted a snapshot of Luke grinning from ear to ear in honor of St. Patrick’s Day on Saturday 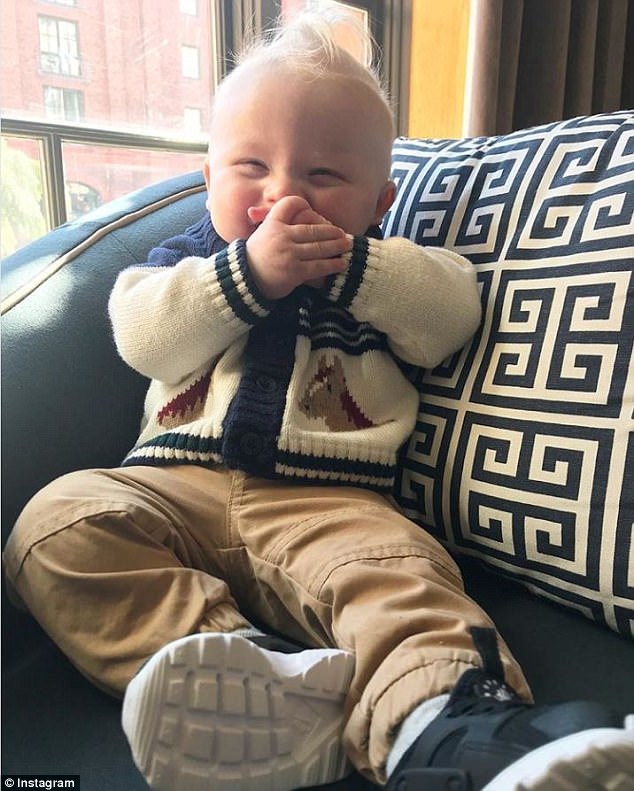 Sweet boy: The pictures, which show Luke modeling a knit sweater, appear to have been taken in New York City

During their trip, the couple paid tribute to St. Patrick’s Day by sharing adorable photos of their baby boy smiling from ear to ear on a couch.

When posting the pictures, which appeared to be previously taken in New York City, Lara wrote: ‘#HappyStPatricksDay from this little leprechaun.’

Earlier that day, Lara shared a snapshot of herself posed on the slopes with her husband, writing: ‘Perfection!’

The two are both wearing ski suits and goggles while posing side-by-side on top of a mountain.

Eric shared the same photo on his Instagram account, revealing that they have been together for 10 years. 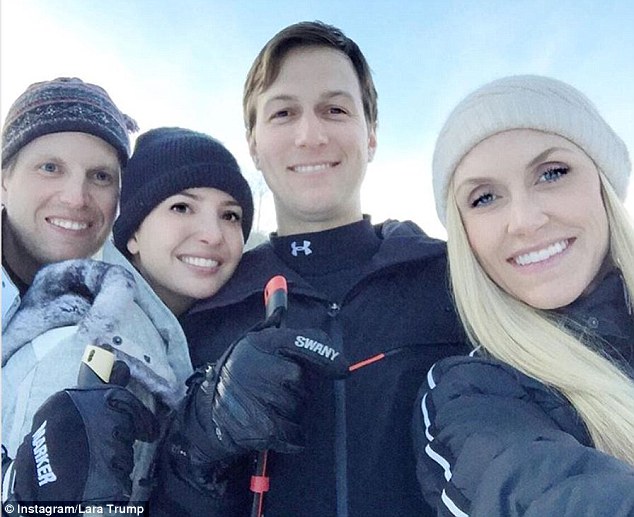 Feeling nostalgic? Lara shared this photo throwback photo of herself posed with her husband Eric, his sister Ivanka, and her husband Jared Kushner last Thursday 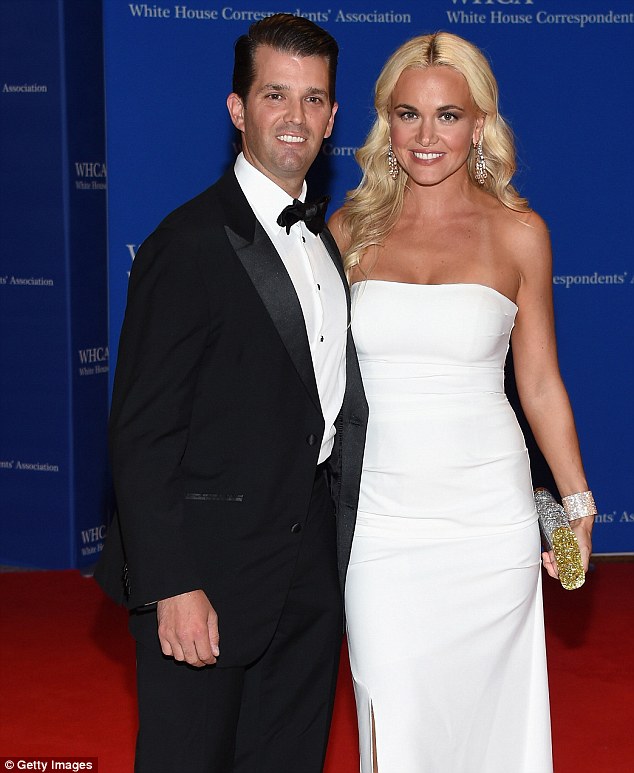 End of an era: The snapshot was posted around the same time news broke that Vanessa Trump filed for divorce from her husband Donald Jr. after 12 years of marriage 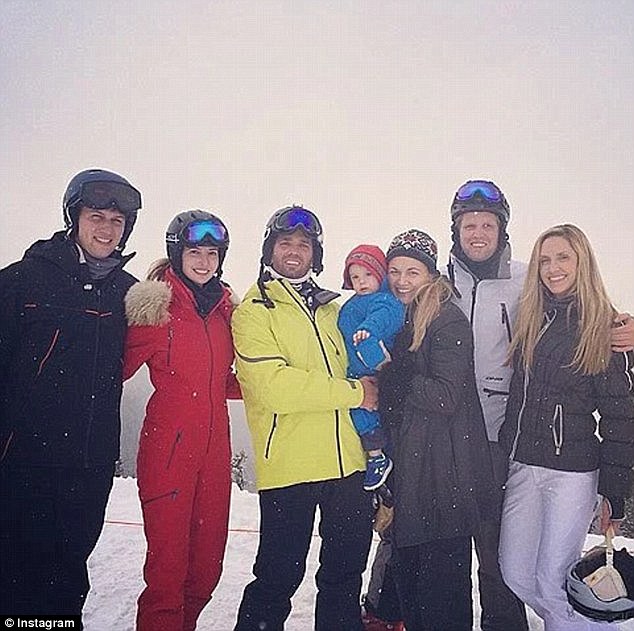 Back in the day: Don Jr. and Vanessa traveled to Aspen with the two couples in 2015. The family trip appears to be the same one Lara is referring to her in her throwback picture

Eric and Lara first met in 2008 while they were both enjoying a night out in New York City with their friends.

Lara opened up about the meeting eight years later during an appearance on Fox & Friends in 2016.

‘We met here in New York. Actually, we were both out one night with friends and being, probably, the two tallest people in the room was really helpful,’ Lara explained.

‘I think we spotted each other across the room. I was immediately intrigued, and hopefully Eric felt the same way.’ 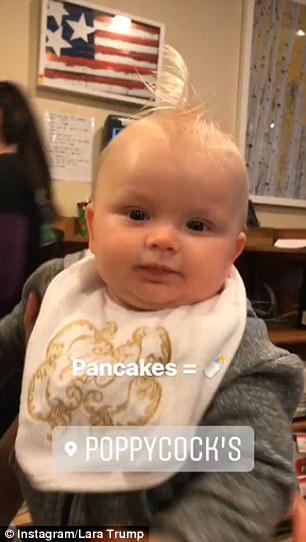 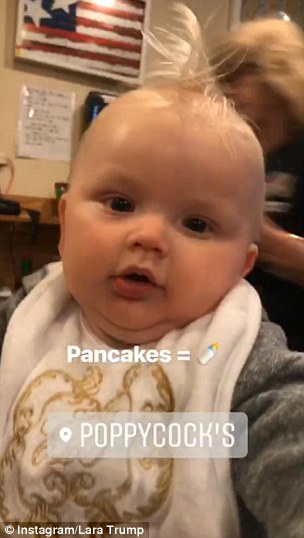 Feeling nostalgic? On Thursday morning, Lara shared a video of her six-month-old son Luke at Poppycock’s, a restaurant in Aspen 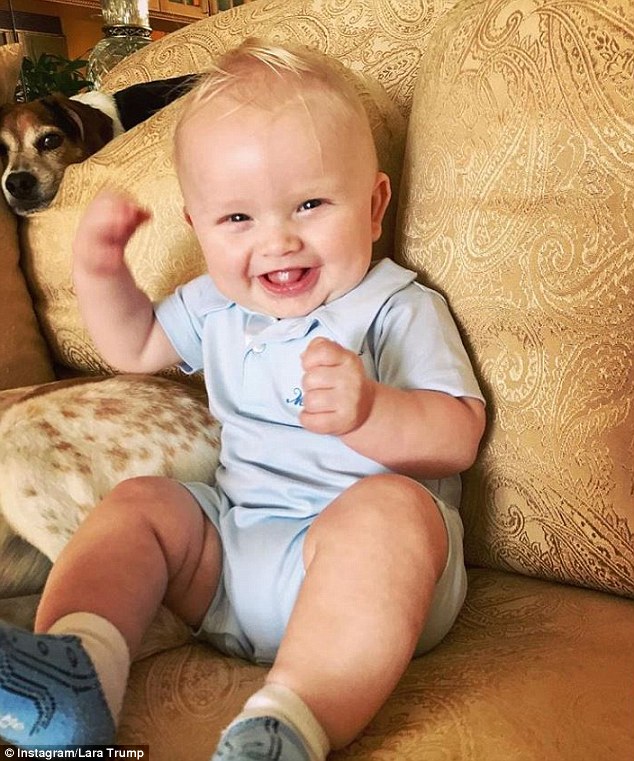 Despite her initial interest in Eric, it took them about three months to go on their first date. After five years together, the couple tied the knot in 2014.

Lara may have been feeling a bit nostalgic last Thursday when she shared a throwback photo of herself posed with Eric, his sister Ivanka Trump, and her husband Jared Kushner in Aspen.

The snapshot was posted around the same time news broke that Vanessa Trump filed for divorce from her husband Donald Jr. after 12 years of marriage.

In the photo, Jared, 37, is cuddled between Lara and Ivanka, while Eric is posed behind his older sister.

‘#Throwback 3 years ago today!’ Lara captioned the snapshot, which was coincidentally missing her brother-in-law Don Jr. and his wife.

Lara’s Instagram post came at an awkward time, but she was likely feeling sentimental while visiting Aspen with Eric and Luke.

Don Jr. and Vanessa traveled to Aspen with the two couples in 2015, and it appears to be the same trip Lara is referring to in the caption of her throwback picture.