Shut up! Moment large lizard sees off noisy dog with a SLAP of its powerful tail

Most lizards scurry away when confronted by other animals in the wild.

But this water monitor in Thailand showed it was no yellow-belly when it slapped a dog across the face with its tail.

Footage shows a large water monitor fight off two dogs by swinging its tail and hitting one in the mouth.

The video was shared on social media by airline worker Suthida Sri’ from Bangkok, Thailand, on July 18. 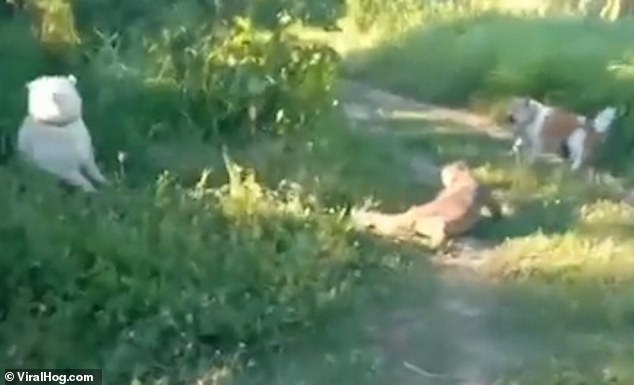 The dog runs away after the monitor’s warning shot and another barking dog gets up in fear in footage shared by airline worker Suthida Sri’ from Bangkok, Thailand

In the video, one of the dogs to the left of the lizard begins barking aggressively at the water monitor as the lizard faces it motionless.

The dog begins to creep towards the monitor still barking.

Suddenly, the other dog bolts upright and begins barking as well and the monitor slowly turns to face it, adjusting its body position.

The monitor loudly slaps the first dog across the face with its tail, which runs away in shock, and a woman behind the camera lets out a yelp. 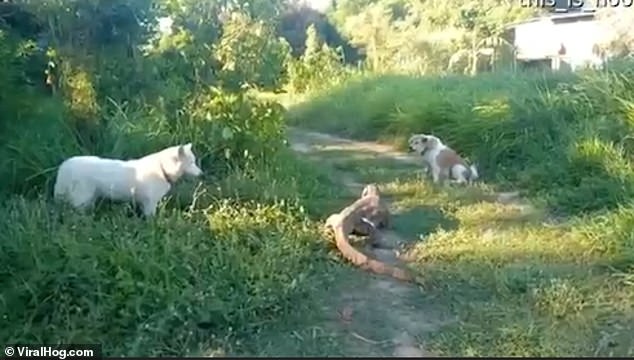 Both dogs bark at the large lizard before it whips one with its tail. When monitors are threatened their tail turns into a powerful club with a jagged crest that makes it all the more dangerous

The Asian water monitor, which can grow more than 6ft long, originally evolved in mangroves and has remained largely unchanged for around 17million years.

The lizards, similar in appearance to Komodo dragons, are primarily adapted for life in water, with a long tail that works as the perfect aquatic propulsion system.

But when monitors are threatened the tail turns into a powerful club with a jagged crest that makes it all the more dangerous.