Furious Larry King called time on his ‘toxic’ 22-year marriage by yelling: ‘I am not gonna die married to that woman, she’s gone,’ DailyMailTV can reveal.

Larry hit the roof and filed for divorce after discovering his wife Shawn tried to meddle with his estate while he was seriously ill in hospital following a heart attack.

The 85-year-old had been at death’s door after suffering a heart attack in April and family and friends feared the chat show host wouldn’t make it.

DailyMailTV understands tension in their relationship finally reached a breaking point when Shawn, 59, presented ailing Larry with legal documents that would give her rights over their property and negatively impact their two adult sons, Cannon, 19 and Chance, 20.

And when the star made an ‘incredible’ recovery and returned home, he soon discovered the full extent of his wife’s scheming.

When the star made an ‘incredible’ recovery and returned home, he soon discovered the full extent of his wife’s scheming, sources said 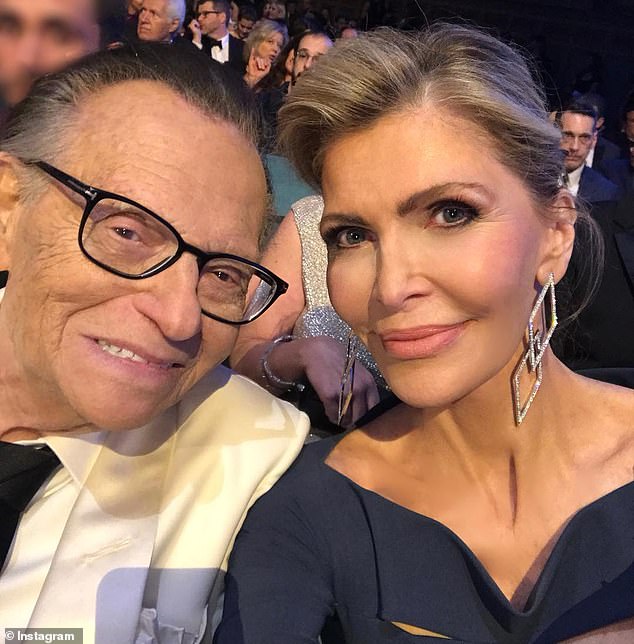 Split: Larry King made the decision to divorce his wife Shawn, 59, after learning she had allegedly been meddling with his estate while he was in hospital recovering from a heart attack, sources told DailyMailTV 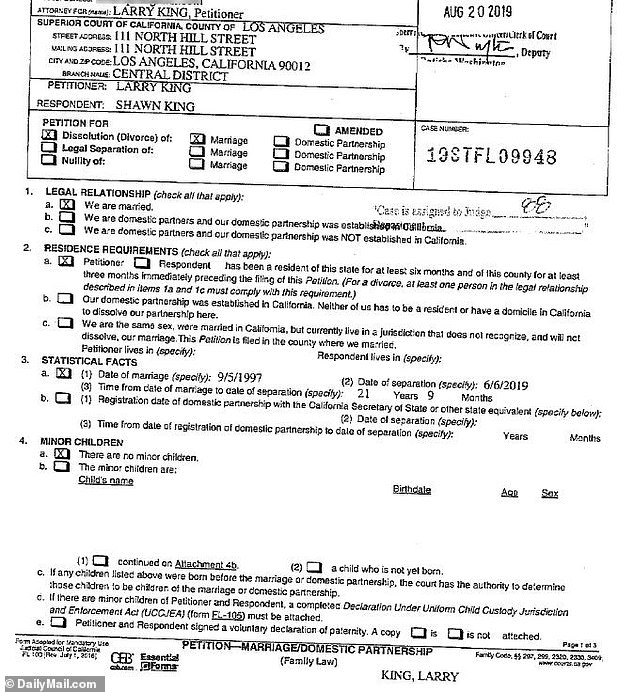 Divorce documents obtained by DailyMailTV reveal King filed on August 19 and lists the date of separation as June 6, 2019

His outraged sons and other family members also pleaded with their father to end the marriage.

Larry filed for divorce at Los Angeles Superior Court on Tuesday citing ‘irreconcilable differences’ and the date of separation was listed as June 6, 2019.

Just a week earlier, DailyMailTV exclusively revealed the unwell talk show host failed to turn up to accept the American Spirit Award sparking fears his health has taken a turn for the worse.

An insider told DailyMailTV: ‘Larry wasn’t well and he was furious when he found out Shawn had been meddling and trying to get her name on their property, he hit the roof, their whole marriage was a charade anyway but he saw what she did as the ultimate betrayal so he ended it. He was in hospital and she’s plotting behind his back.

‘When news of the divorce came through it came as a huge relief to a lot of people around Larry, there’s no sadness there.

‘Everyone is now crossing their fingers and hoping he lives long enough to see the divorce through, there’s always a chance she will try to drag it out. 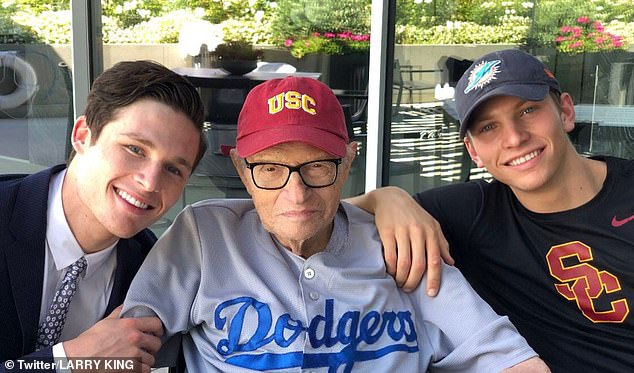 King shared this photo on Twitter on Monday posing with his sons with Shawn –  Cannon and Chance –  saying: ‘I’m so proud of my boys’, a day before he filed for divorce 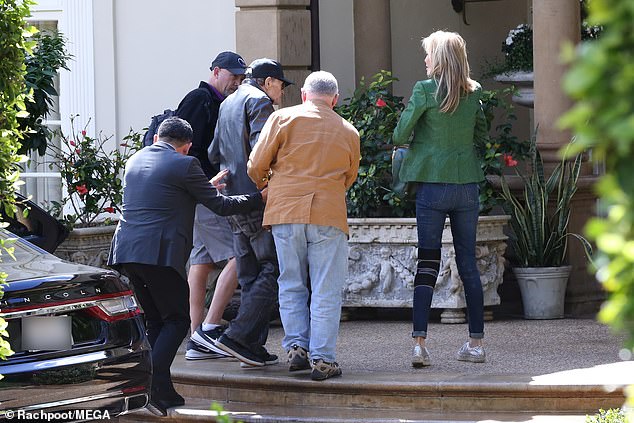 King suffered a heart attack in April, sparking fears the frail 85-year-old wouldn’t make it. Above he is pictured being assisted into the house while his wife Shawn looks on in March

‘Their marriage has been a sham for over ten years, they sleep in separate bedrooms, she constantly cheats and their relationship was toxic.

‘It’s uncomfortable to be around them, they fight like crazy and bicker all the time, they shove each other.

‘They were only together for the sake of their two sons.’

The source added that the marriage lasted so long because Larry also had a fear of being alone and enjoyed having an attractive younger woman on his arm.

Shawn too enjoyed the trappings of being married to Larry King – the private jets, luxury hotels and invites to glitzy parties and events.

‘But ultimately there was no love there anymore, Shawn stopped caring for Larry a long time ago, she is an extremely conniving woman,’ the source said.

The source said that Larry’s outlook on life had significantly changed following the death of his younger brother Marty Ziegler in 2017 and the loss of a close childhood friend around the same time.

And with their two sons turning of age, he decided to finally pull the plug on more than two decades of marriage.

Leading civil rights and family law attorney Lisa Bloom said Shawn could drag out the divorce for many years because it would be in her best interests to do so.

She said Shawn’s lawyers will have informed her that it would be far better financially to delay the divorce until her 85-year-old husband passes. 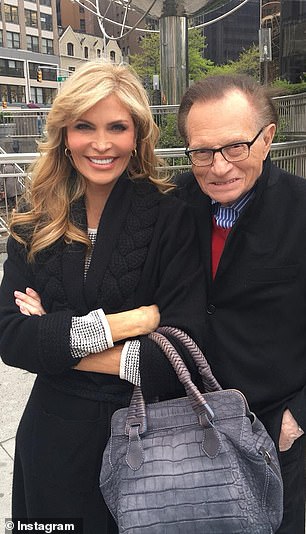 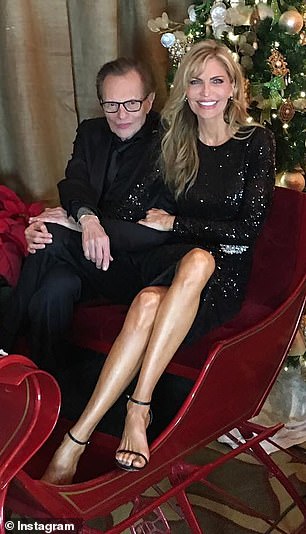 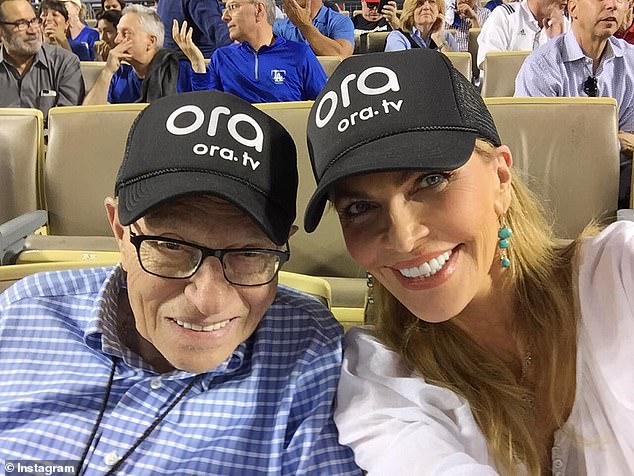 King reportedly saw Shawn’s plotting as the ‘ultimate betrayal’ and decided to call it quits, according to insiders

‘A divorce does disadvantage her. I could see this one dragging out, they typically drag on anyway, the hard thing is to make them go faster because the courts are so over burdened, but if her attorneys file motions and delays, which is very easy to do, this could drag on for a long time and yes it would be in her interests to remain married to him at the time that he dies.’

Bloom said typically high profile divorces can string out for at least three to four years but she’s heard of cases that have lasted a decade.

‘I don’t know whether they have a pre-nup, they probably do, but the law is without a pre-nup all assets and money made during the marriage is split 50-50.

‘She would also be entitled to a significant inheritance amount because they’ve been married for so long.

‘But if they’re divorced she no longer has those rights.’

Bloom added: ‘I wish Larry the best, I don’t wish any ill upon him, but if I were representing her I would certainly encourage her delay the divorce proceedings for as long as possible.’

DailyMailTV understands Larry – who has been married eight times to seven different women – hasn’t been intimate with his wife for years and they live in separate areas at their $15million Beverly Hills mansion. 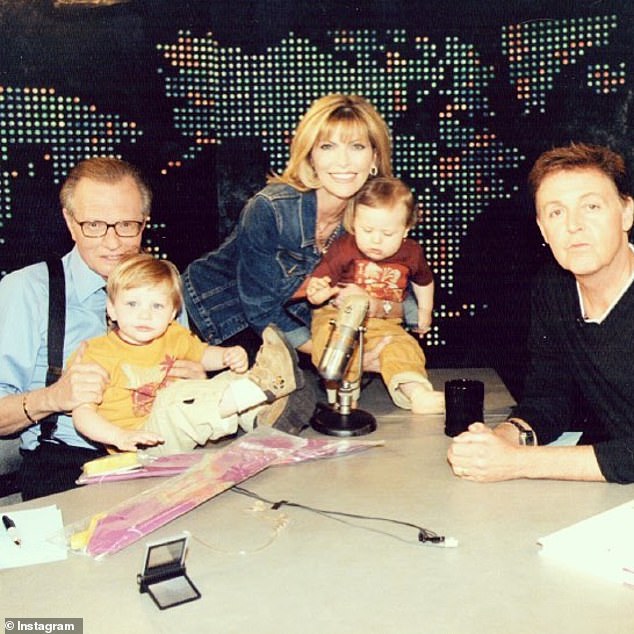 Larry, who has been married seven times, married Shawn in 1997. The two are pictured with their two sons and Paul McCartney on his show in an undated photo 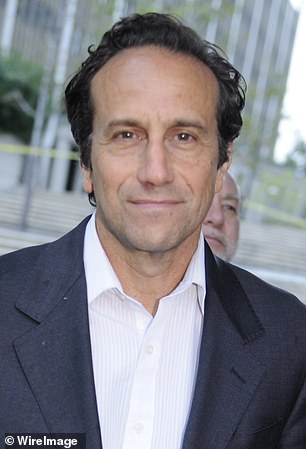 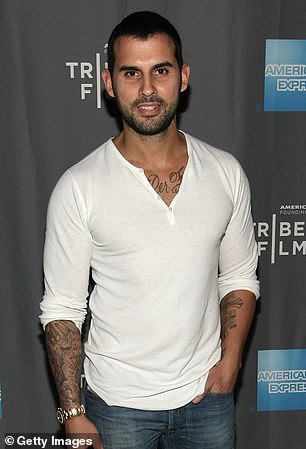 2016 cheating rumors: Shawn allegedly had a year-long affair with public speaking guru Richard Greene (left) in 2016. In 2010, Shawn was accused of having an affair with her son’s baseball coach former Yankee Hector Penate (pictured right)

The source revealed Shawn had become increasingly ‘manipulative’ and ‘scheming’ towards her husband and they were constantly at one another’s throats.

‘They have been unhappy for most of their marriage, they have been separated for at least ten years,’ the source said.

According to the insider King almost filed for divorce back in 2016 when more allegations of infidelity by his wife emerged.

It was reported that Shawn had enjoyed ‘steamy afternoon sex sessions’ with another man.

Her mystery lover was later identified as a handsome public-speaking guru called Richard Greene, whose clients have included US senators, Arianna Huffington, Princess Diana, Naomi Campbell and Will Smith.

She was also accused of having an affair with their kids’ baseball coach in 2010.

The source said: ‘He almost pulled the trigger in 2016, he wanted to gather all his staff together, the accountants, everybody and he was ready to divorce Shawn, but it just never happened.

‘Even his older children were told and they were ready to support him, but Larry changed his mind. It was the second or third time he’d considered divorce.

‘But after that we all gave up hope and figured that he would just die married to Shawn.

‘Now it has all changed. When Larry found out Shawn was being fast and loose with his estate he flipped.

‘It was alarming to the children and the family and Larry was furious, I guess he just had enough.’