The billionaire mogul and power broker, who built a casino empire spanning from Las Vegas to China and became a singular force in domestic and international politics, was being treated for non-Hodgkin’s Lymphoma.

At one point the third richest man in the world, the casino billionaire first announced that he was being treated for non-Hodgkin’s lymphoma back in 2019.

His funeral will be held in Israel with a memorial service held in Las Vegas at a later date.

Former president George W. Bush and Donald Trump Jr. led the tributes to Adelson on Tuesday both calling him ‘an American patriot’. 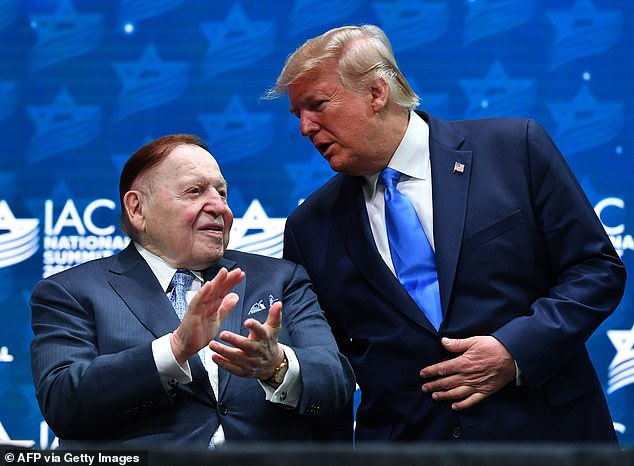 Adelson and his wife Miriam, 75, set new records for political donations in the 2020 cycle, giving a total of $218 million to President Trump’s campaign and various Republican causes 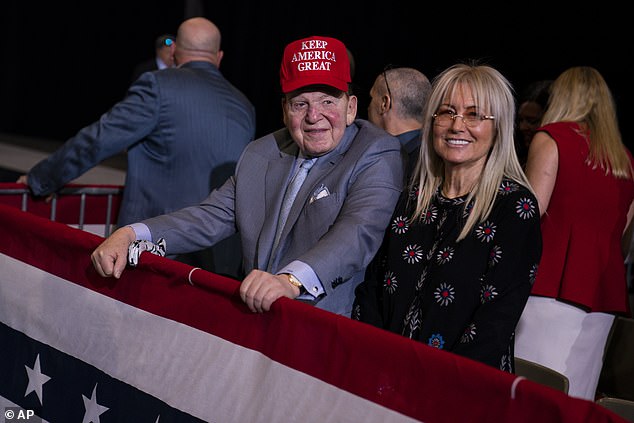 His wife Miriam, pictured with him above, called Adelson the ‘love of my life’

‘Sheldon was a true American patriot and a giant among men,’ Trump Jr. wrote in a tweet.

‘He treated his employees like family. His philanthropic generosity changed countless lives. The US-Israel relationship is stronger today because of him. My heart goes out to the Adelson family.’

‘Sheldon battled his way out of a tough Boston neighborhood to build a successful enterprise that loyally employed tens of thousands and entertained millons,’ said former President Bush.

‘He was an American patriot, a generous benefactor of charitable causes, and a strong supporter of Israel.’

A son of Jewish immigrants, Adelson was raised with two siblings in a Boston tenement, who over the second half of his life became one of the world’s richest men.

Adelson was the majority shareholder of the Las Vegas Sands, and one of the world’s biggest casino moguls.

The company owns the Venetian and Palazzo hotel and casinos on the Las Vegas Strip, along with properties in Singapore and Macao. 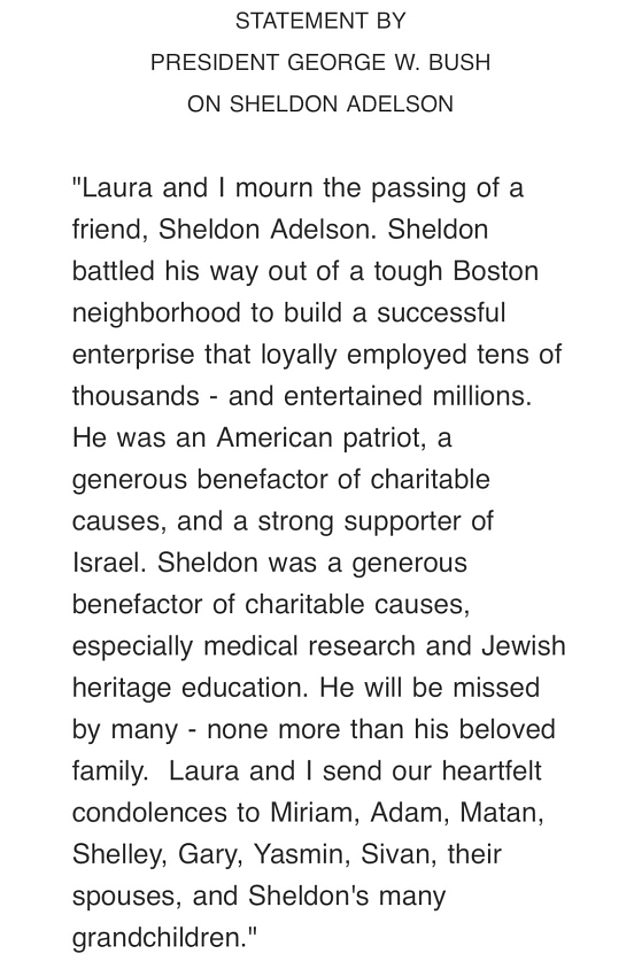 The chairman and CEO of the Las Vegas Sands Corporation brought singing gondoliers to the Las Vegas Strip and foresaw correctly that Asia would be an even bigger market.

He also owned the largest circulating newspaper in the Nevada, the Las Vegas Review-Journal.

Though Adelson is not the listed publisher of the Review-Journal, the rival Las Vegas Sun recently accused him of having ‘operational control’ of the paper in a court dispute over a joint-operating agreement. 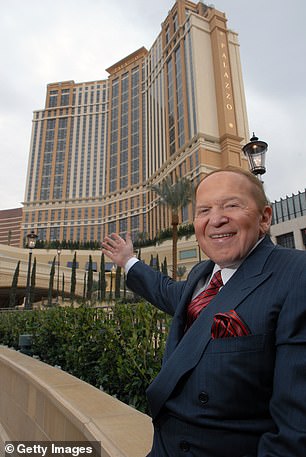 Multi-billionaire Sheldon Adelson at The Palazzo Las Vegas in 2008

‘If you do things differently, success will follow you like a shadow,’ he said during a 2014 talk to the gambling industry in Las Vegas.

‘Much has been written and said about how Sheldon, the son of poor immigrants, rose to the pinnacle of business success on the strength of grit and genius, inspiration and integrity,’ his wife Miriam wrote in a statement Tuesday.

‘His was an all-American story of entrepreneurship. When Sheldon launched a new venture, the world looked on with anticipation.’

‘Sheldon was the love of my life. He was my partner in romance, philanthropy, political activism and enterprise. He was my soulmate,’ she added.

‘To me – as to his children, grandchildren, and his legions of friends and admirers, employees and colleagues – he is utterly irreplaceable.’

Blunt yet secretive, Adelson resembled an old-fashioned political boss and stood apart from most American Jews, who for decades have supported Democrats by wide margins.

Adelson was considered the nation’s most influential GOP donor over the final years of his life, at times setting records for individual contributions during a given election cycle.

In what was widely seen as a mark of the Adelsons’ influence with Trump, Miriam Adelson was given a Presidential Medal of Freedom in 2018.

He recently gave $75 million to a super PAC that attacked President-elect Joe Biden in the lead-up to last November’s election. 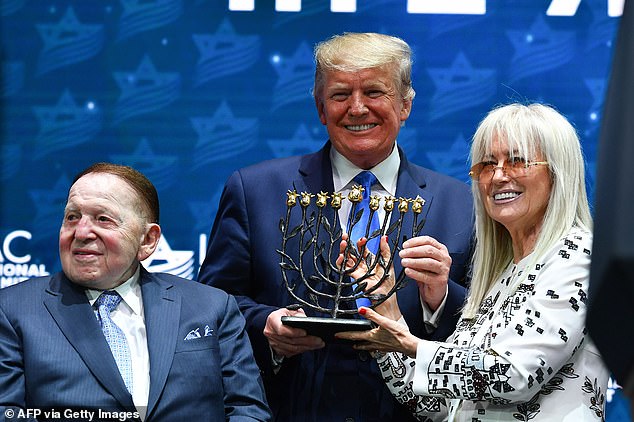 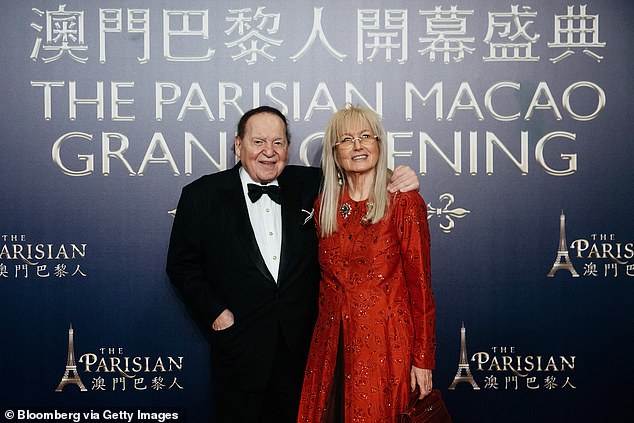 ‘Much has been written and said about how Sheldon, the son of poor immigrants, rose to the pinnacle of business success on the strength of grit and genius, inspiration and integrity,’ his wife Miriam, pictured with him above, wrote in a statement Tuesday 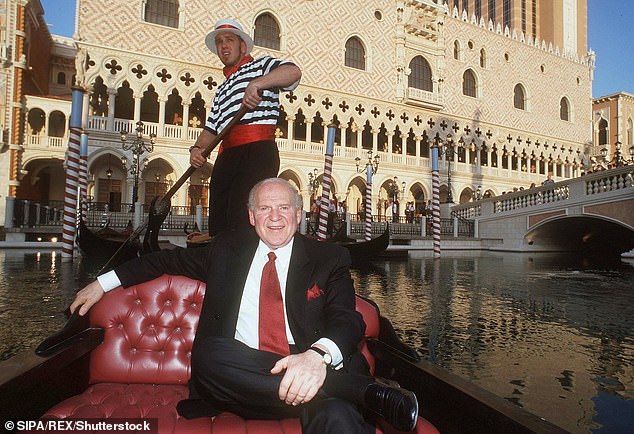 Adelson and his wife Miriam, 75, set new records for political donations in the 2020 cycle, giving a total of $218 million to President Donald Trump’s campaign and various Republican causes.

For the 2018 midterm elections, Adelson donated about $113 million to the Republican Party through various conservative political action committees.

In 2012, Politico called him ‘the dominant pioneer of the super PAC era’.

Adelson regularly hosted the party’s top strategists and most ambitious candidates at his modest office, wedged among the casinos on the Strip.

Throughout, he helped ensure that uncritical support of Israel became a pillar of the GOP platform, never more visibly demonstrated than when the Trump administration relocated the U.S. embassy from Tel Aviv to Jerusalem in 2018.

The inflammatory move had been adamantly opposed by Palestinians and was long a priority for Adelson, who had even offered to help pay for it, and for the Republican Jewish Coalition, of which he was the primary benefactor. Adelson and his wife, Miriam, were front and center at the ceremony in Jerusalem.

Adelson recently made news for offering his private jet to Jonathan Pollard, who spent 30 years in U.S. prison for spying for Israel.

Pollard used Adelson’s lavish private Boeing 737 to return to Israel last month, after finishing his sentence for selling classified U.S. secrets to the nation in the 1980s. 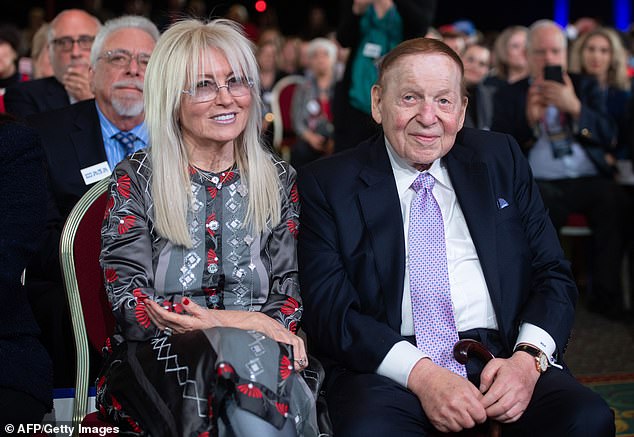 Adelson and his wife Miram, 75, (together in 2019) set new records for political donations in the 2020 cycle, giving a total of $218 million to Republican causes 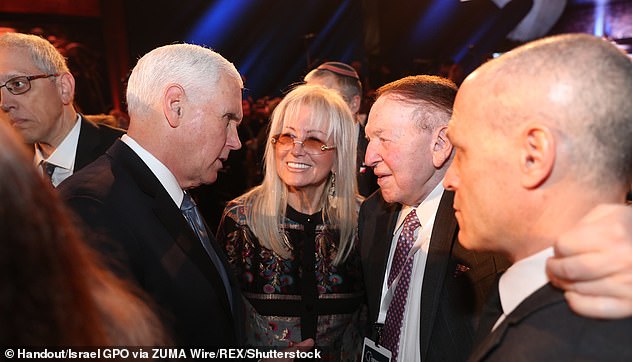 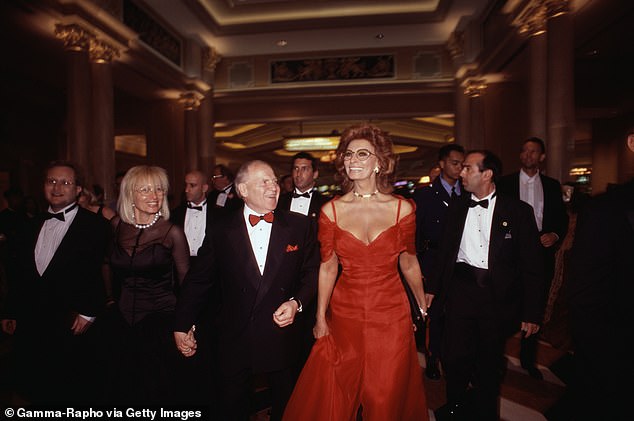 Senate Majority Leader Mitch McConnell was also among those paying tribute to Adelson on Tuesday.

‘Our nation lost a remarkable American with the passing of my friend Sheldon Adelson,’ McConnell said in a statement.

‘Sheldon built an incredible life and career. He climbed from sleeping on tenement floors during the Great Depression as a young boy to literally towering over Las Vegas and beyond.’

House Republican Leader Kevin McCarthy called Adelson ‘one of the greatest, most generous businessmen in history’.

‘Sheldon Adelson had a deep love of country, love of community, and love of Israel,’ McCarthy added.

‘His life made him a fearless advocate for freedom and entrepreneurship and a source of counsel and support to a generation of conservatives, including me.’

Sheldon Garry Adelson was born in 1933, in the Dorchester neighborhood of Boston. His father was a taxi driver, his mother the manager of a knitting store.

A natural entrepreneur, he was selling newspapers by age 12 and running a vending machine business at 16.

After dropping out of City College of New York and serving in the Army, he attempted to start dozens of businesses, from toiletries to de-icing windshields.

Adelson, who said he disdained email, began to amass his fortune with a technology trade show, starting computer convention COMDEX in 1979 with partners before selling his stake in 1995 for more than $800 million.

When he bought the Sands Hotel in 1989, he was thinking convention space, not just gambling, would make money. It did. He built a convention hall to keep his hotel rooms full on weekdays and others soon followed the business model.

Meanwhile, his effort to replicate the Strip in Macau, the only Chinese province to allow gambling, made his wealth grow exponentially.

When faced with water and marsh land, Adelson directed his company to build land where there wasn’t any, piling sand up to create the Cotai Peninsula. Soon his Macau revenue outstripped that of his Las Vegas holdings.

He later expanded his business to Singapore, where his Marina Bay Sands hotel and its infinity pool were featured in the hit film ‘Crazy Rich Asians’, and had been pressing to open a casino in Japan.

His Macau business also spawned a long-running wrongful termination lawsuit brought by a former chief of Sands China Ltd. who accused Adelson and the company of firing him for exposing a host of misdeeds. Adelson often clashed with attorneys while appearing on a Clark County courtroom´s witness stand.

The Sands China lawsuit was among dozens involving Adelson, whose cases included his suing a Wall Street Journal reporter for calling him ‘foul-mouthed’ (the parties settled, the words remained) to being sued by his sons from his first marriage for cheating them out of money (he won).

A long-running feud with fellow casino tycoon Steve Wynn turned to friendship when Wynn joined Adelson´s effort to end online gambling. Critics said Adelson was trying to stifle competition. Adelson countered that there was no way to ensure children and teenagers wouldn´t gamble and said he was ‘not in favor of it exploiting the world´s most vulnerable people.’ 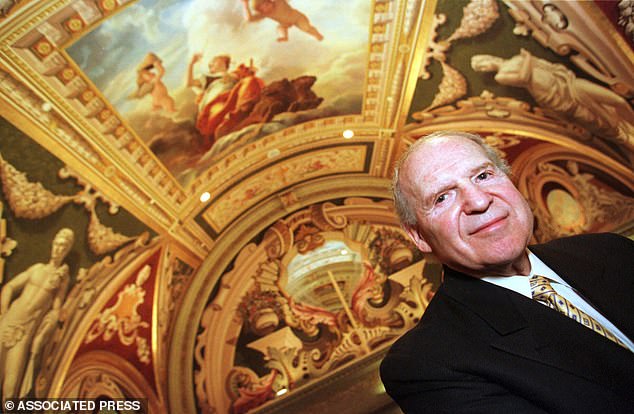 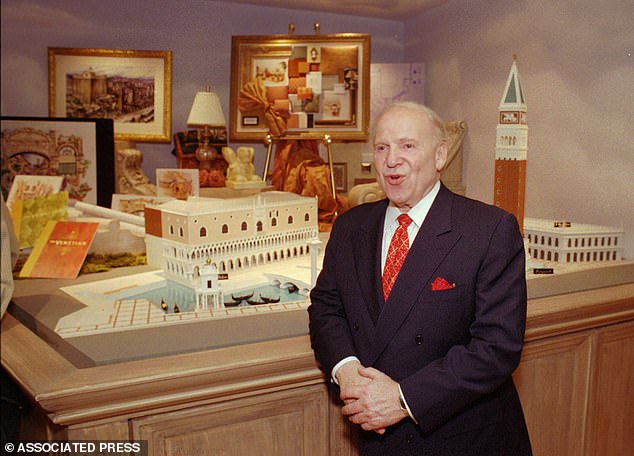 Adelson speaking about the construction of The Venetian in January 1999 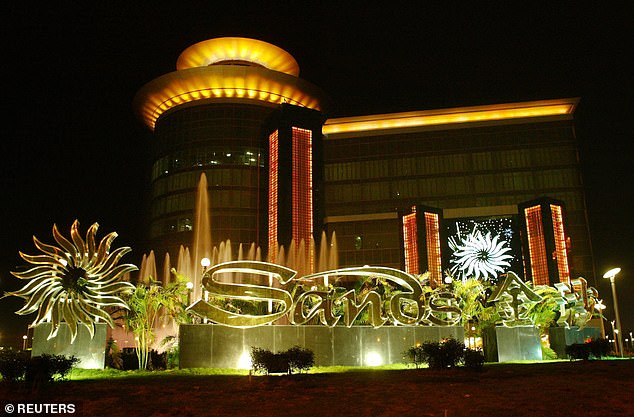 Adelson’s company owns the Venetian and Palazzo hotel and casinos on the Las Vegas Strip, along with properties in Singapore and Macao (above)

Adelson was married twice. He and his first wife, Sandra, were divorced in 1988.

Three years later, he married Miriam Farbstein-Ochshorn, an Israeli-born doctor he met on a blind date and whom many believe helped deepen his involvement with Israel.

Their honeymoon trip to Venice inspired Adelson to raze the historic Sands hotel-casino, once a favorite hangout for Frank Sinatra among others, and replace them with a pair of massive complexes: The Venetian and The Palazzo, one of the city´s tallest buildings.

Sheldon Adelson adopted his first wife’s three children and had two children with his second wife. 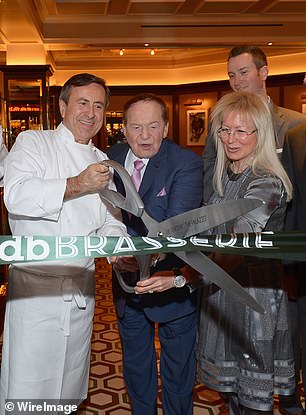 Sheldon Adelson and his wife Dr. Miriam Adelson attend the ribbon cutting during the celebration of the opening of db Brasserie at The Venetian in May 2014

Among numerous philanthropic projects, he and Miriam Adelson were especially committed to the research and treatment of substance abuse, a personal cause for Sheldon Adelson.

His son Mitchell, from his first marriage, died of an overdose in 2005 and Adelson would spend millions opposing Nevada efforts to legalize marijuana.

When asked at a gambling conference what he hoped his legacy would be, Adelson said it wasn´t his glitzy casinos or hotels, it was his impact in Israel.

He donated $25 million, a record sum for a private citizen, to Israel´s Yad Vashem Holocaust Memorial. He established a think tank in Jerusalem.

He was closely aligned with the conservative Likud party and funded a widely-read free daily newspaper called ‘Israel Hayom,’ or ‘Israel Today,’ so supportive of Prime Minister Benjamin Netanyahu that some Israelis nicknamed it ‘Bibi-ton.’

He sponsored ‘Birthright’ trips to Israel for young Jewish adults that were criticized by some participants as intolerant of opposing views.

His attachment to Israel was life-long and so deep that he once said he wished his military service had been in an Israeli uniform instead of an American one.