A Las Vegas police officer accidentally fired a gun inside the Mandalay Bay mass shooter’s suite during the investigation, police have said.

Las Vegas Sheriff Joe Lombardo revealed the astonishing incident for the first time on Monday, declining to name the officer involved or explain the circumstances of the accident on the night of the October 1 tragedy.

‘Nobody was struck’ when the gun went off, Lombardo told the Las Vegas Review-Journal.

‘It happened and we’re investigating it, just like we do with any officer-involved use of force,’ he said.

The round or rounds were not fired in the same room where gunman Stephen Paddock was found dead, Lombardo said. Paddock booked adjoining suites connected by a door.

Las Vegas Sheriff Joe Lombardo revealed the astonishing incident for the first time on Monday, declining to name the officer involved or explain the circumstances of the accidental gunshot 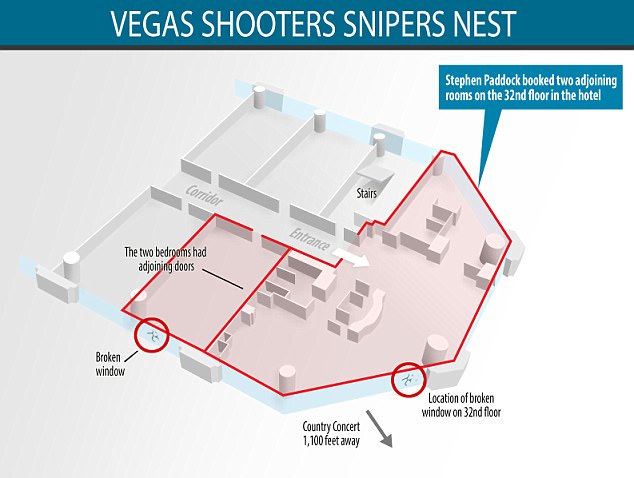 Lombardo said the accidental gunshot did not occur in the same room where Paddock’s body was found. The shooter booked two adjoining rooms that were used in the attack 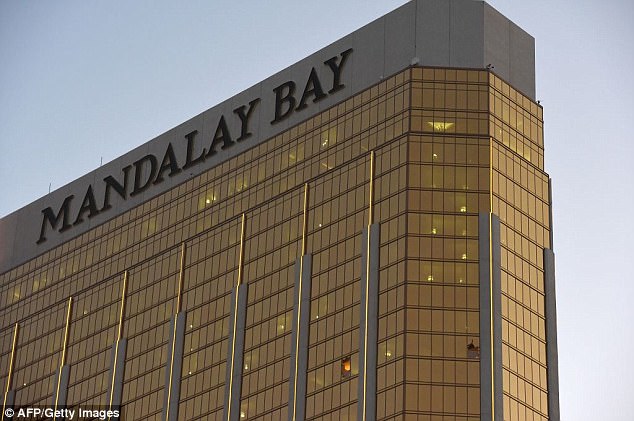 Broken windows of Stephen Paddock’s suite are seen in the days after the shooting. Cops made an astonishing blunder by firing a gun accidentally in the suite, it has been revealed

Fifty-eight people were killed and hundreds wounded at a country music festival, when gunfire rained down on the crowd from Paddock’s 32nd-floor suite.

Paddock was found dead of a self-inflicted gunshot wound through his mouth, investigators say.

The Clark County coroner’s office had not released the gunman’s official cause or manner of death as of Monday.

Also on Monday, Lombardo revealed that there were no security cameras covering the doors to Paddock’s suite or the stairwell door he apparently sealed, with the only cameras on the floor trained on the elevator banks.

The shocking investigative bumble of the accidental gunshot at the crime scene was revealed as many questions about the largest mass shooting in modern US history remain unanswered.

Paddock’s motive has yet to be explained. The killer’s brain is being sent to Stanford University for a months-long examination after a visual inspection during an autopsy found no abnormalities. 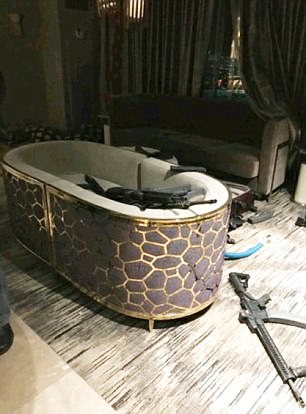 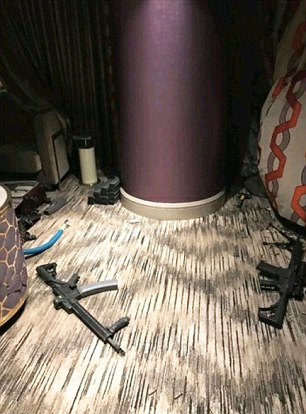 The interior of the suite is seen during the investigation. Police say one officer accidentally fired his gun inside the suit in the hours immediately after the massacre 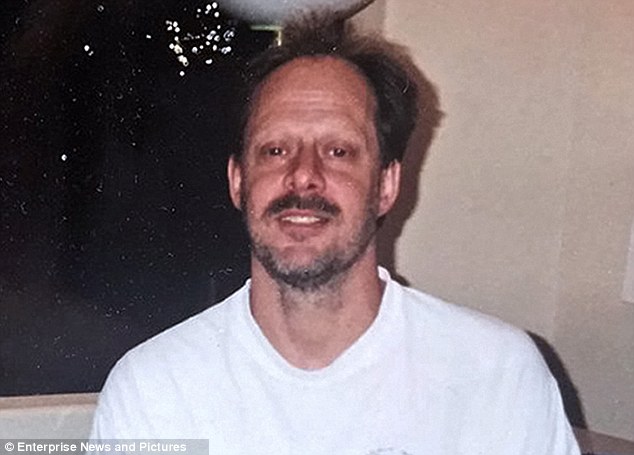 Paddock’s motive has yet to be explained. The killer’s brain is being sent to Stanford University for study after a visual inspection during an autopsy found no abnormalities

Authorities have resorted to putting up billboards in southern Nevada seeking tips.

Inconsistencies in the shooting timeline have remained persistent as well, with officials revising the official timeline several times.

A key witness who could possibly resolve some questions, the hotel security guard who was shot at the outset of the rampage, has remained largely elusive.

He reportedly left the country in the days after the tragedy, crossing back into the US on October 8 via the San Ysidro border check in California driving a rental car with California plates.

After giving one interview on the daytime talk show Ellen, which did not address key questions about the shooting, Jesus Campos was whisked out of sight of the press.

He is said to be holed up at another hotel owned by MGM, the proprietor of the Mandalay Bay.

The FBI has repeatedly declined to comment on the case, and the last public press conference on the shooting was on October 13.