A grandmother who is selling her size two wedding dress from the Nineties because other women in her family aren’t the same size to wear it on their big day has been accused of fat shaming.

Posting on Facebook Marketplace, the grandmother, who lives in Las Vegas, listed her professionally-preserved David’s Bridal wedding dress for $800 alongside a lengthy explanation.

She claimed that her sons married women who are ‘bigger’ than the ‘petite’ frame she had at her 1994 wedding, and her granddaughters will also be ‘too big’ to wear the dress for their ceremonies.

The advert went viral after being shared on Twitter with critics accusing the grandmother of ‘fat shaming’ and said the style of wedding dress is too dated for brides of this generation. 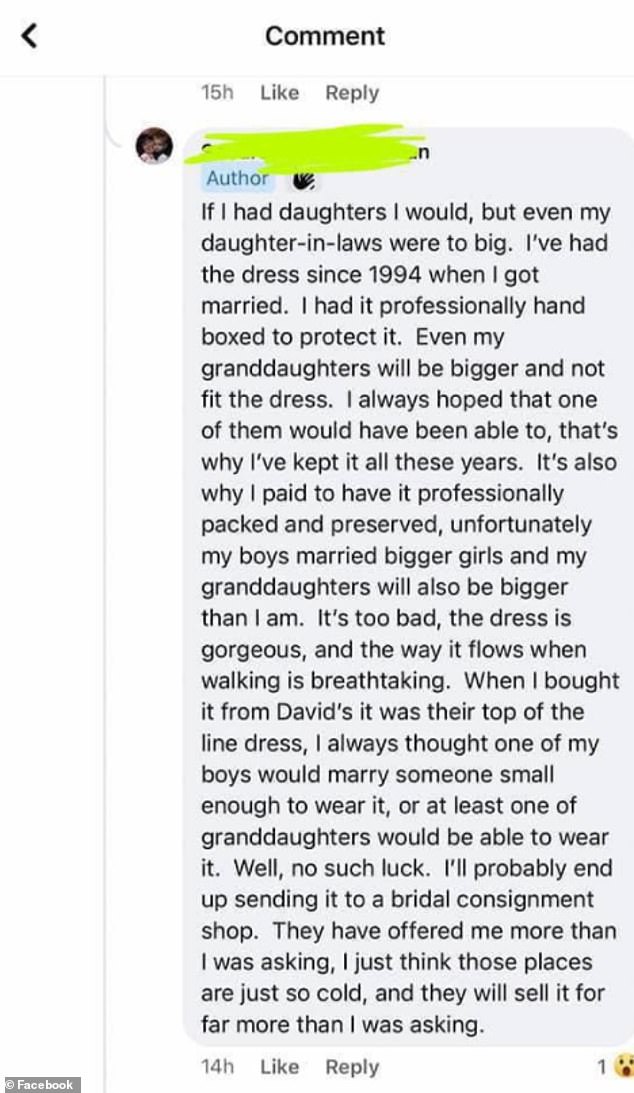 Responding to a comment, the grandmother explained that her daughter-in-laws and granddaughters are ‘too big’ to wear her size 2 wedding dress

The grandmother took to Facebook Marketplace with a selection of photos showing herself wearing the dress on her wedding day.

She explained her reason for selling the item in response to a comment, saying: ‘If I had daughters I would, but even my daughter-in-laws were too big. I’ve had the dress since 1994 when I got married. I had it professionally hand boxed to protect it.

‘It’s too bad, the dress is gorgeous and the way it flows when walking is breathtaking.

‘When I bought it from David’s it was their top of the line dress, I always thought one of my boys would marry someone small enough to wear it, or at least one of granddaughters would be able to wear it.

‘Anyway, so weird how everyone born in the late 80s/early 90s ended up with an eating disorder!!!’

A stream of responses to the post also commented on the grandmother’s decision to complain about the size of the women in her family.

‘She used the word ‘huge’ not ‘big’ – and the word ‘huge’ in that context is used negatively to slam her granddaughters who are ‘too big/huge’ to wear her size two petite wedding dress,’ one wrote.

Another said: ‘How much do we want to bet the ‘bigger girls’ her sons married aren’t actually that big. I feel so sorry for everyone who has ever had to interact with this woman.’

A third added: ”Huge’ granddaughters who are about five years old. I get that she clearly has some sort of bad relationship with her own body/eating but whew.’

Others blasted the grandmother for assuming the women in her family would want to wear her wedding dress despite changing trends.

One person wrote: ‘I don’t understand the idea of assuming your daughter/ daughter-in-law/ granddaughter will wear your wedding dress. What suits one woman, may not suit another, not to mention differing taste & fashions of the time change. It’s their day & should wear what they want.’

‘I was married in 1992, I paid $400 for my dress. I would NEVER think anyone in my family would want my old dress! Styles change! The whole shaming someone because they’re not a size two is vile! Also David’s Bridal is not Gucci. Get over yourself,’ another commented.

A third said: ‘Probably gained weight to get out of wearing that dress.’

A fourth added: ‘I buy and sell vintage, there is no way in hell she’ll get more than $50 for this and that’s a long shot. It’s tacky, dated, David’s and 100 per cent polyester.

‘Also, it seems she married a very large man? I think she has a ‘oh gosh, I’m just so tiny’ fetish.’