Everyone knows what happens in Vegas stays in Vegas, but the city will be unveiling a new slogan after months of speculation.

The new phrase will be publicly revealed in a 60 second ad during the 2020 Grammy Awards broadcast on January 26, ABC News reports.

Steve Hill, the CEO and president of the Las Vegas Convention and Visitors Authority, shared the news of the organization’s new branding during the Vegas Chamber’s Preview Las Vegas event in Nevada on Friday.

LVCAVA has reportedly spent years creating the new tourism campaign, but they are ‘not confirming nor denying’ the slogan until after the ad runs.

Billy Vassiliadis, CEO R&R Partners said: ‘It’s personal to me and the 75 other people at R&R Partners who work on the Las Vegas Convention and Visitors Authority account to get it right.’

‘Everything we do is driven by listening to our customers and what they want and need. We are confident this new campaign delivers that, and is the perfect evolution of ‘What Happens Here, Stays Here,’ he added. 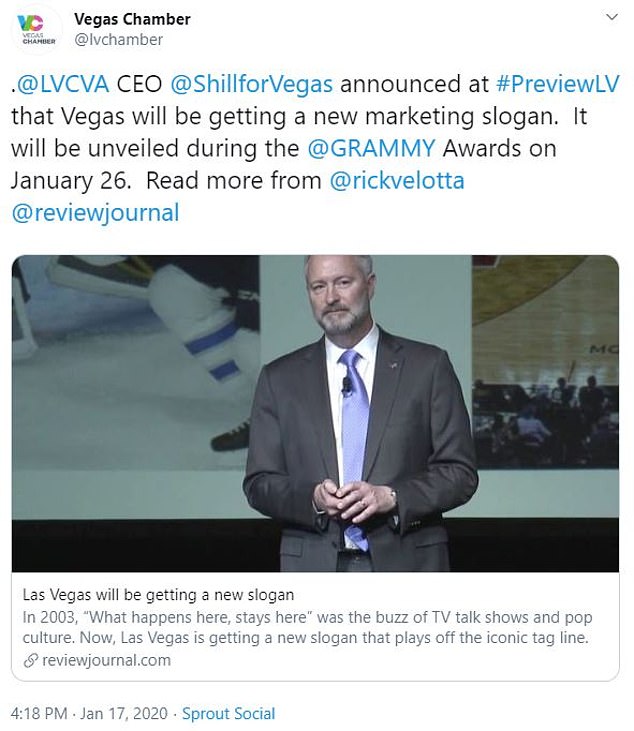 Steve Hill (pictured), the CEO and president of the Las Vegas Convention and Visitors Authority says the new slogan will show the city’s growth from the Entertainment Capital of the World

Hill said the goal is for people to see how Las Vega has become more than the Entertainment Capital of the World.

Hill told the Las Vegas Review-Journal that the new slogan will resonate with visitors.

‘We think it’ll have literal resonance as well as emotional resonance as ‘What happens here, stays here, and that’s why we did the testing because we wanted to know what authentic was,’ he said.

According to Nevada historian Michael Green, ‘What happens here, only happens here,’ would appeal to people looking for services they can’t find anywhere else.

‘It’s a vow to the fact that – once upon a time – gambling was what happened here, and it was the only thing that happened here legally.  Nevada could rest on its laurels, though it isn’t,’ he told USA Today.

What separates Las Vegas from regional gambling hubs that are popping up across the country is sheer amount of attractions.

Green said: ‘You go to the other places to get your bachelor’s, but Las Vegas is where you go for the graduate degree in fun. You warmed up over there. That’s the bullpen. Come here to get in the game.’

Visitors and residents will see the new slogan showcased as different locations along the Las Vegas strip starting 6pm on Sunday.

Las Vegas’ award-winning slogan was first introduced in 2003 after tourism dropped in the aftermath of 9/11.

Hints of the slogan update began in November after a number of celebrities caused speculation.

During an Aerosmith concert at Park MGM, Steven Tyler told the ‘When I say, “What Happens Here,” you say, “Only Happens Here!” ‘

During an Aerosmith gig at Park MGM, Steven Tyler told the crowd ‘When I say, “What Happens Here,” you say, “Only Happens Here!” ‘ 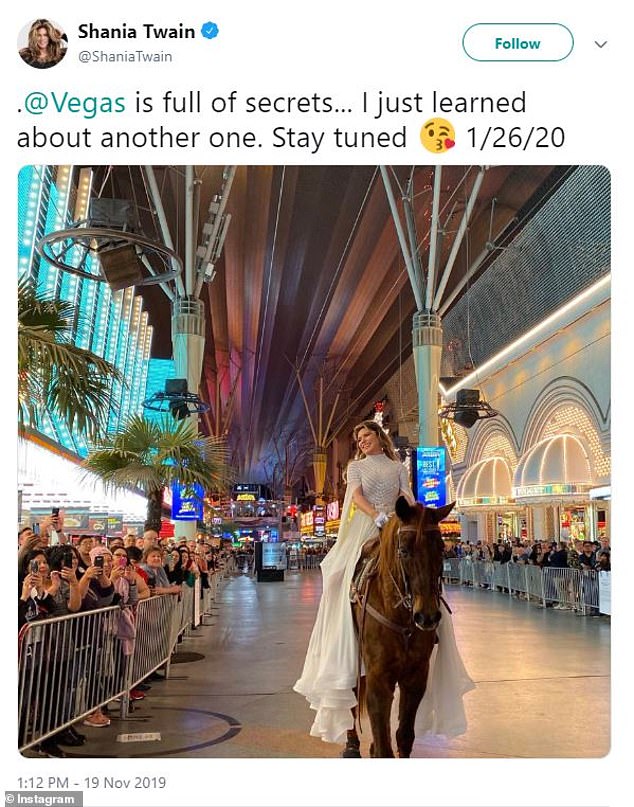 On the day of the Aerosmith gig Shania Twain tweeted a teaser for the same announcement date Aerosmith shared on social media: ‘.@Vegas is full of secrets… I just learned about another one. Stay tuned 1/26/20’

The band also posted about a collaboration with the city on Instagram, saying: ‘You know we only do ‘Amazing’ things. Which is why we’ve teamed up with #Vegasto create the next big thing for the city… Find out more January 26th 2020!’

Singer Shania Twain shared a snap of her riding a horse in front of an adoring crowd to tease the new advertising slogan.

‘Vegas is full of secrets…I just learned about another one. Stay tuned. 1/26/20’ 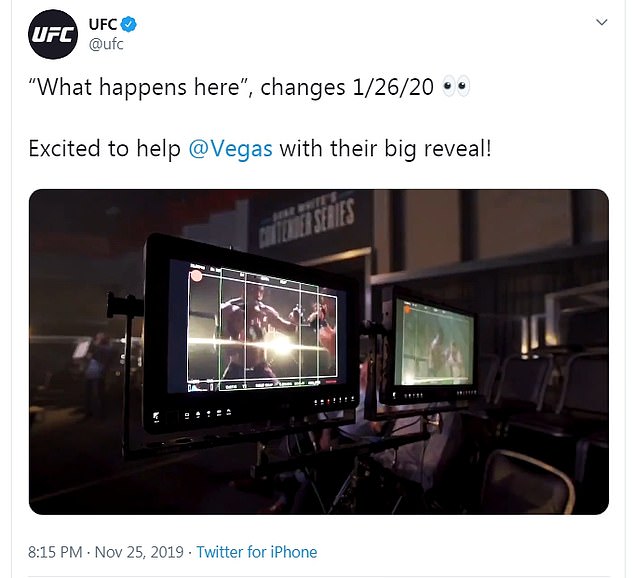 Last May, the company behind the original tagline was forced to deny they were switching it up amid speculation that came from a separate campaign.

The Now & Then campaign featured two women who met and fell in love in Las Vegas before deciding they would continue the relationship in the city.

The commercial shows the evolution of their relationship and ends with a wedding. 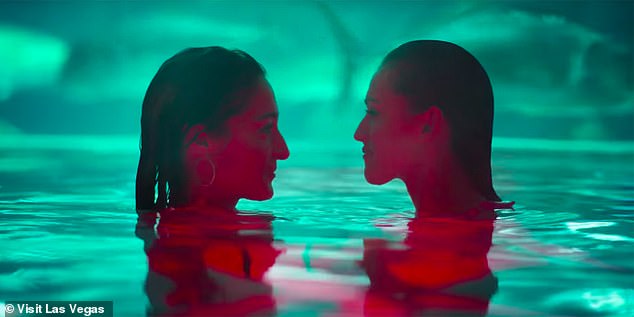 ‘Adult freedom, choice and empowerment has always been the essence of the brand, and this series of spots is making that timely and contextual to social and cultural trends,’ R&R Partners CEO Billy Vassiliadis said last May about the Now & Then campaign.

‘We’ve been listening to our visitors and would-be visitors, and the growing sentiment is the idea of a socially contemporary and relevant Las Vegas.’

In February, R&R Partners said they were not getting rid of the slogan when asked after sexual harassment allegations were pointed at casino owner Steve Wynn.

The hashtag #VegasStrong has since been featured on some branding.

After word of the slogan went public, social media users began making their own Las Vegas taglines on Twitter 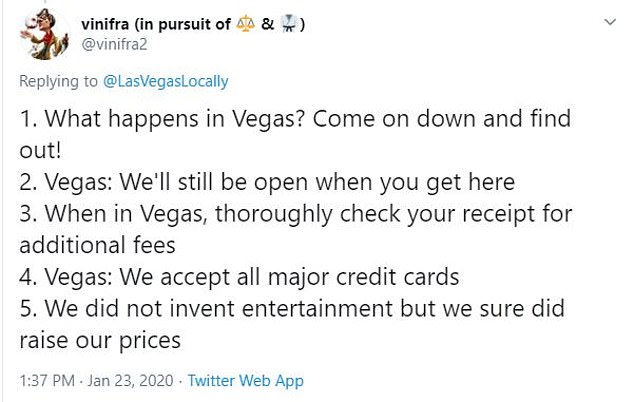 This user shared several ideas, including ‘Vegas: We’ll still be open when you get here’ and ‘When in Vegas, thoroughly check your receipt for additional fees’

Social media users caught wind of the slogan change and decided to create their own versions to rebrand Sin City.

One user gave a list of ideas, including, ‘Vegas: We’ll still be open when you get here. When in Vegas, thoroughly check your receipt for additional fees. We did not invent entertainment but we sure did raise our prices.’

One person wrote: ‘Come for vacation, leave on probation.’