A divorced man who tried to get a tattoo of his ex-wife’s initials removed from his ring finger has been left with a huge brown blister where her name used to be.

Andrew Milne, 32, now has a grape-sized bubble of pus on his finger as a reminder of his past marriage.

Mr Milne had already had a rose tattooed over the top of his ex-wife’s initials but recently decided to get rid of both the artworks.

When he tried to have the tattoo erased with laser removal, he developed an inch-long pus-filled blister on the ring finger on his left hand.

The fashion account manager from Corby, Northamptonshire, says the blister isn’t painful but admits it ‘doesn’t look great’ and it leaks pus.

Andrew Milne, 32, had already had a rose tattooed over his ex-wife’s initials but decided he wanted both layers of the ink gone and began laser removal therapy

Mr Milne had the procedure started on a Friday and, by Saturday morning, he was sporting a brown blister which was an inch long and half-an-inch high.

He is convinced the symptom is just a bad reaction and not a reflection of the studio where he’s having the removal done.

Mr Milne said: ‘It was quite alarming.

‘When I went to bed on Friday night the skin was slightly raised, about a couple of millimetres, which is quite normal after the first couple of laser sessions.

‘But then I woke up on Saturday morning and it had really come up. It’s about an inch long and half an inch high, and it seems to be quite tough.’ 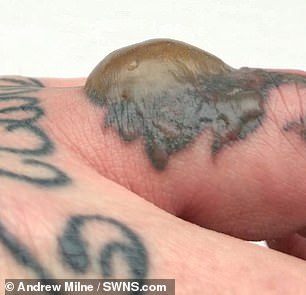 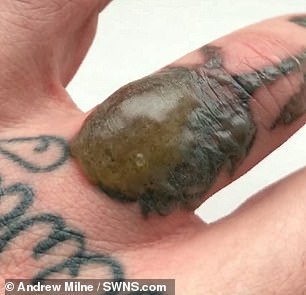 Laser tattoo removal works by zapping the ink inside the skin to break it down into smaller fragments which can be absorbed into the bloodstream and disappear.

The tattoo only fades a small amount each time and it can take numerous sessions to fully get rid of the ink.

It’s not uncommon for the skin to become damaged and blister or scab, and the NHS recommends looking after any wounds with aloe vera gel or Vaseline.

Removal can be costly – Mr Milne’s has cost him £70 already for two sessions and he’s been told he could need up to seven more.

He added: ‘It’s not too painful but it’s very unsightly. It doesn’t look great at all. It’s lasted two days now and it’s still going strong.

‘I have mentioned it to the woman who did the laser session and she seemed a bit concerned. She told me to just do my best not to pop it.

‘It does leak every now and then.

‘I don’t think it’s anything to do with the place I had it done, I’m fairly sure that I’ve just had a bad reaction to it.’

But he’s having second thoughts about carrying on with the treatment, adding: ‘I’m not entirely sure if I will continue with the tattoo removal.

‘It’s kind of put me off taking it any further.’

HOW DOES LASER TATTOO REMOVAL WORK?

The process of getting a tattoo involves pushing ink down into your ‘second layer’ of skin, or the dermis.

In the same way that your body tries to force out splinters, it will recognise this ink as a foreign object and try to remove it.

The way it does this is to send white blood cells to destroy the ink particles.

The only problem is that the ink particles are larger than the white blood cells, making this process extremely slow.

This is why tattoos do start to fade naturally after a few decades.

The energy from the laser breaks down the tattoo ink into tiny fragments, which are eventually absorbed into the bloodstream and safely passed out of the body.

The NHS says it can sometimes take ten or more sessions to remove a tattoo.

They also point out that different types of ink and colours can take longer to remove.

Footage of people getting laser tattoo removal makes it look like the ink instantly disappears.

This is just water in the skin being heated up and temporarily obscuring the tattoo.

Private clinics in the UK usually charge around £150 per session for the removal of a small tattoo.

Treatments in the US can vary, but are normally between $75 and $300, depending on where you live and how big your tattoo is.

If you do end up requiring multiple sessions to remove your tattoo, it could end up costing you.