When Christina Hinkley first laid eyes on her Sydney home in 1954 she couldn’t believe her luck.

‘My God, am I going to live here?’ she whispered as she arrived at the terrace just a few hundred metres from the city’s harbour and iconic bridge.

But after stubbornly refusing to leave for years, dementia sufferer Mrs Hinkley, 83, and her husband Chris, 67, will soon be kicked out of their four-storey castle.

The elderly couple is one of the last public housing families to be ejected from their Millers Point home under a New South Wales government scheme to sells off old properties for millions of dollars to pay for new housing commission homes.

‘There will be a tear in my eye when we leave,’ Mr Hinkley said.

Millers Point resident Chris Hinkley, 67, and his dementia sufferer wife Christine, 83, will be ‘forced’ to leave their home of several decades next February 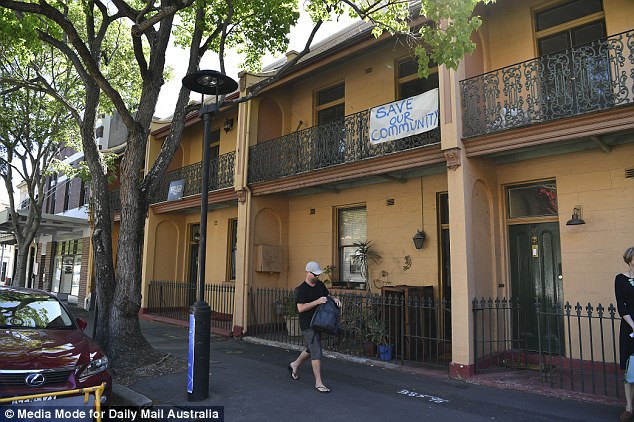 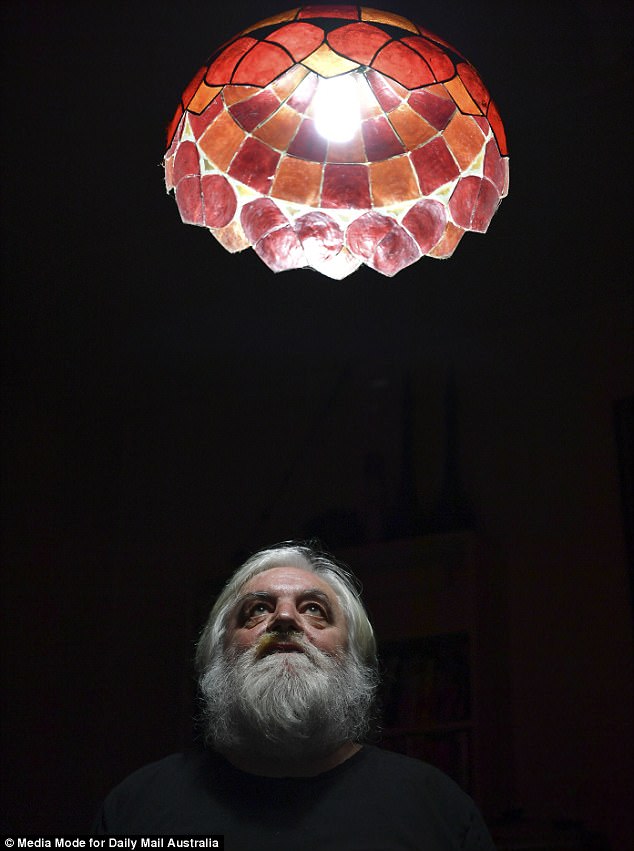 After a long battle, Chris Hinkley and his wife will have to leave their apartment in February next year 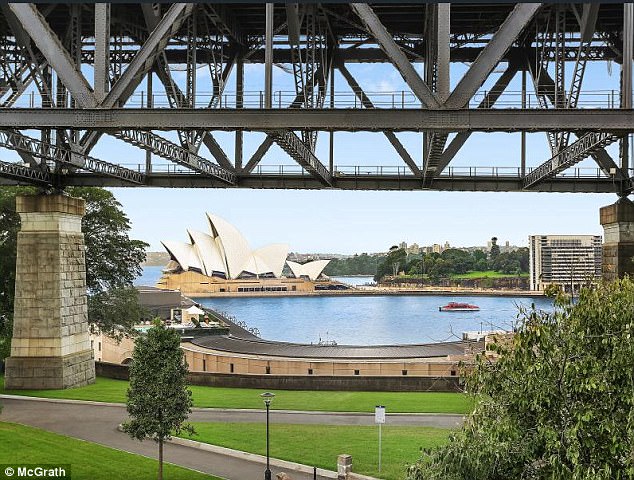 The neighbour’s view: A home just up the road from the Hinkleys sold in June 2016 for $4.6 million. It has views of the Opera House, the Harbour Bridge and the five-star Park Hyatt Hotel 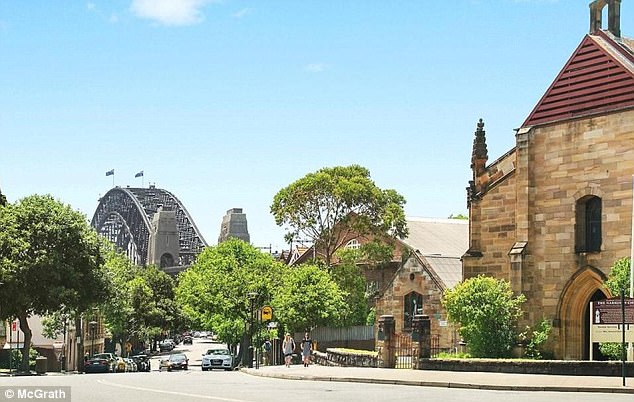 Quite the fancy street! The quiet, leafy pocket of The Rocks where the Hinkleys live is just a stone’s throw from Australia’s most famous vista

Mr Hinkley and his ill wife said they are being ‘forced out’ after years of fighting with legal action and protest since the sale was announced in 2014.

Mrs Hinckley remembers bringing up both her sons playing a little white piano in the sitting room – which has sat in the same place since 1958.

‘When we first got told she just said ‘I am not moving’,’ Mr Hinkley said.

‘I have had doctors tell me it will be detrimental to her health if she goes.

‘I still don’t understand why they had to do it the way they did.

‘I know change has to happen but they should have let the older people stay and live out their lives here.’

‘We have tried to fight it but they legally have to do it – but it is a moral crime.

‘In my eyes they have treated this whole thing like a fire sale and that’s a tragedy.’ 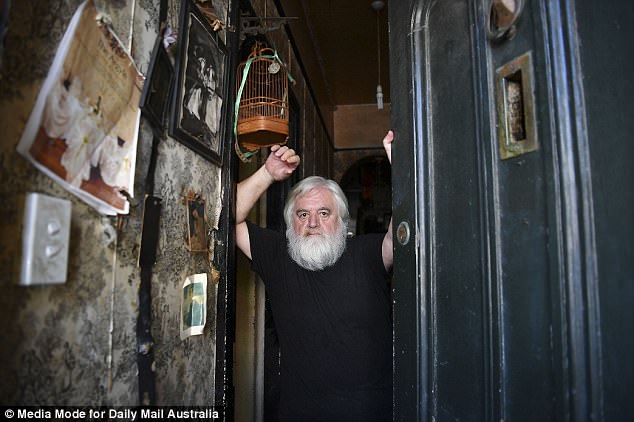 Our house, in the middle of our controversy: Mr Hinkley and his wife are devastated to have to finally leave the home – which was once a boardnig home 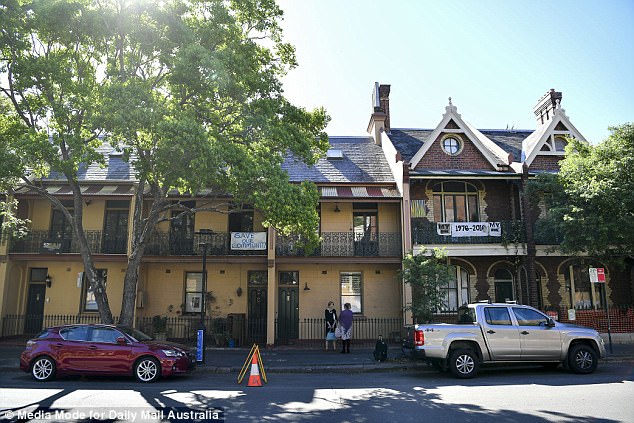 Adios! The family live in one of the few public housing properties left in the area 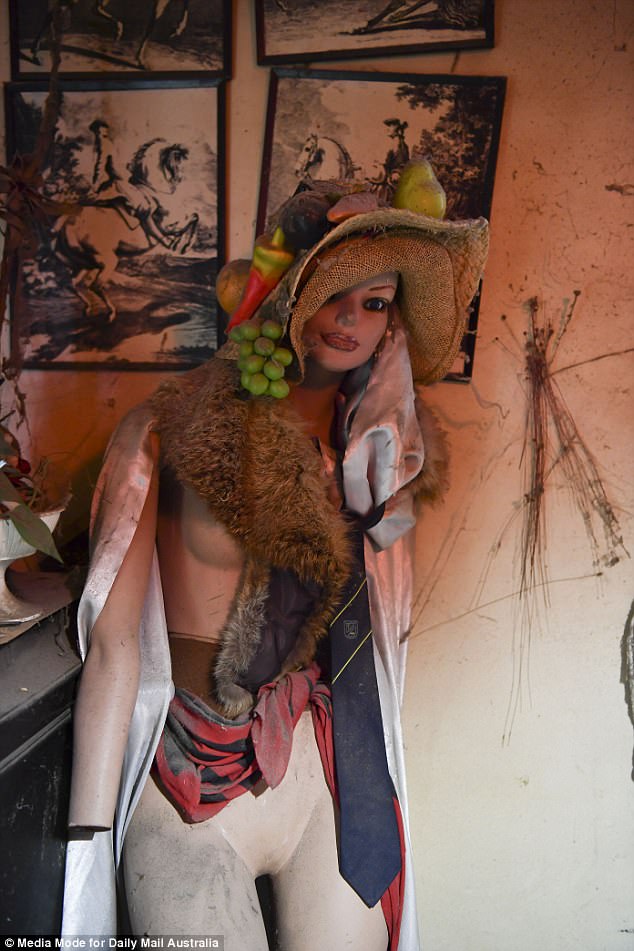 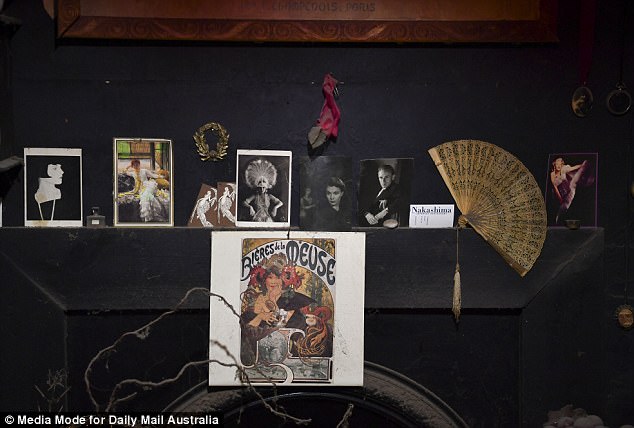 The government has won a cash bonanza from the sale.

Up the street no. 5 – which has a Harbourfront location overlooking the Park Hyatt and the Opera House – sold for $4.6 million in June.

A nearby property, no. 85, went for $2.6 million, advertised as a ‘freestanding Victorian villa… and a slice of Australia’s architectural heritage’.

Mr and Mrs Hinkley were in their home long before the housing commission owned it. Mrs Hinkley ran it as a boarding house until the pair married.

Mr Hinkley said: ‘People have attacked us saying we don’t deserve to be here because they associate people in housing commission with the poor.

‘I have worked hard all my life, when I first came here there was no one on a pension – except the aged.

‘It was a working community – I have only just taken a pension now at 67 – I have had it for six weeks. Christina still isn’t on one.’ 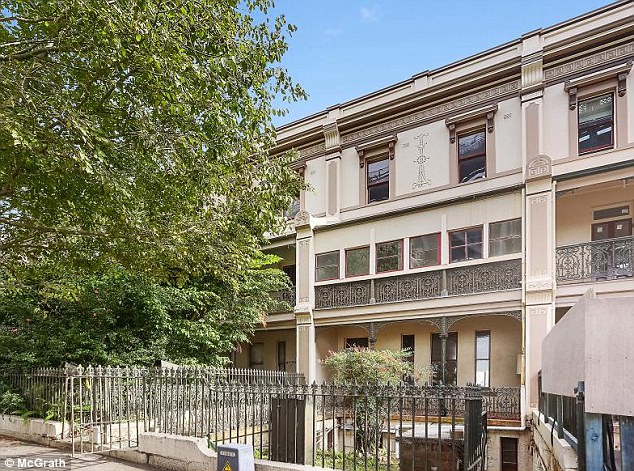 This is the home up the street which sold for $4.6 million last June 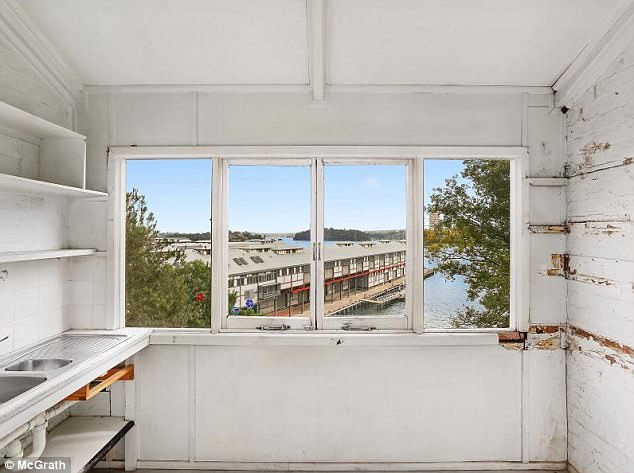 Hot spot! No. 5 Lower Fort Street has views of Sydney Harbour and backs onto Walsh Bay 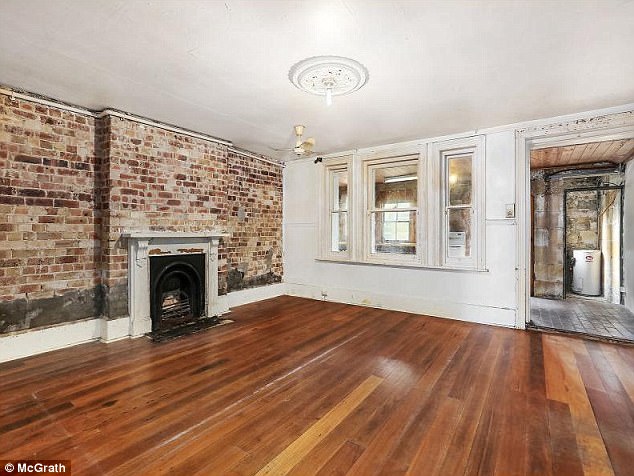 With washed floorboards and Victorian style, it’s little wonder the government is raking in cash when these terraces go on the market 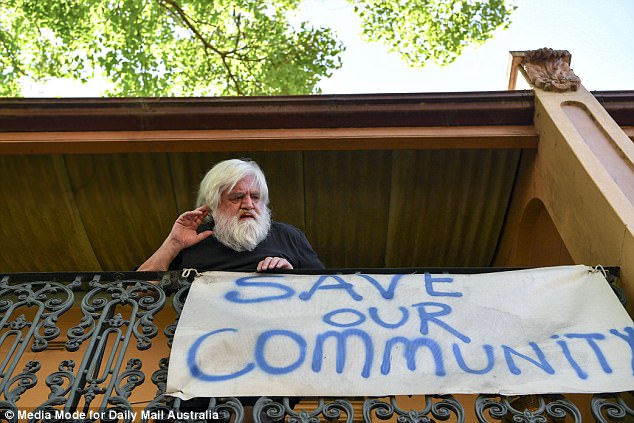 Mr Hinkley on his balcony with his ‘save our community’ sign. It is the area’s sense of community which he says he will miss the most

It is the community Mr Hinkley will mourn for, more than the four-storey home and the memories inside.

Extraordinarily, he still feels like a ‘blow in’ because he didn’t move in until 1973.

‘When I first came here someone was getting married to The Foreigner,’ he said.

‘I later found out the said foreigner was from Balmain (in the inner-western suburbs).

‘It took time to become (a local) but I knew I was one afternoon when I walked into the Hero Waterloo, the local pub, and two old chaps took me under their wing.’

‘This community was living heritage, there were generations of people here. 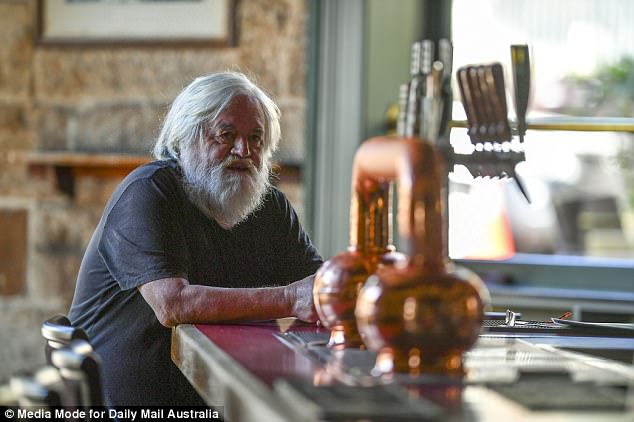 Part of the furniture: Mr Hinkley said he still feels like a ‘blow in’ in the area – despite moving into Millers Point to live with his wife in 1973 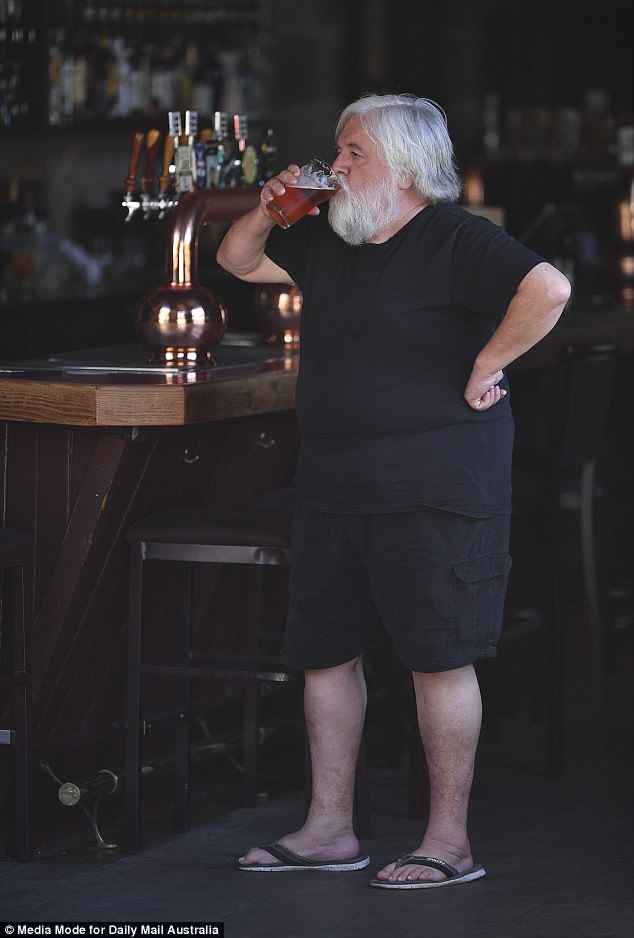 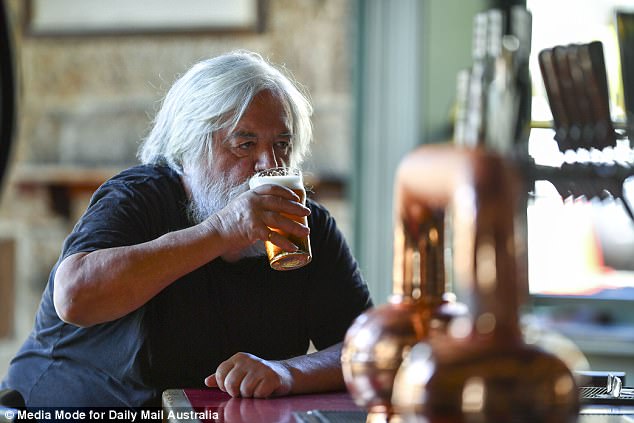 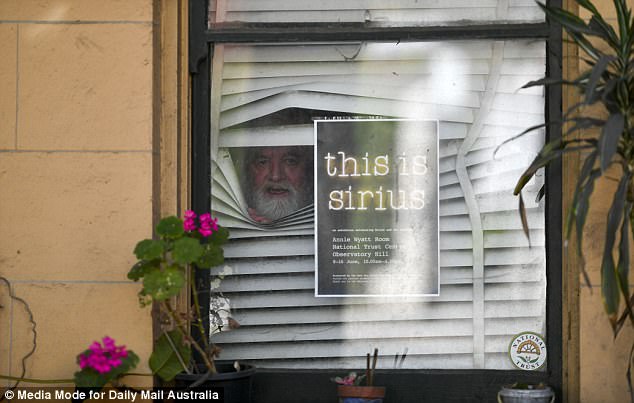 ‘At the shop on the corner I was on to the third generation of people behind the counter.

Mr Hinkley said there have always been children running from terrace to terrace and ‘the back door hadn’t been closed until twelve years ago’. 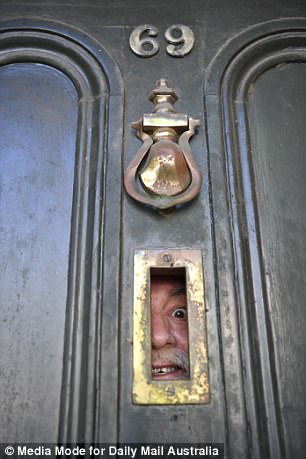 One last look! The couple have a three month period to move from their home

The home may be a little quirky and outdated – it has a bathroom on the balcony but the toilet is in the back yard.

It has been renovated slightly over the years but is now ‘getting a bit tired’ as the couple age.

As ‘tired’ as the property gets the couple are truly devastated it will no longer be called home.

‘We still have community meetings but people agree – it isn’t bad, but it is not the same.’

The couple will have a three month period to move from their home to their new home – in the hope a longer transition will be less of a shock for Mrs Hinkley.

Her little piano will go with them.