The damage caused by the freak summer storm that swept across Sydney on Thursday evening is being compared to the 1999 disaster that left insurance companies with $1.7 billion worth of payouts.

Sydney and the NSW Central Coast were bombarded with the worst hail storm the state has seen in almost 20 years last night.

The storm echoed that of 1999, which at the time was described as ‘apocalyptic’. At its peak, emergency services were receiving a call every 10 seconds. It became Australia’s most expensive natural disaster.

Tens of millions of dollars worth of insurance claims have already been lodged as a result of Thursday’s storm, and insurers expect this number to continue rising in the coming days.

In total, insurers are expecting to fork out $20 million in damages with 15,000 people lodging claims so far.

The Insurance Council of Australia activated its disaster hotline after the Harbour city was smashed with windscreen-shattering 8cm hailstones, torrential rain, lightning and devastating winds.

‘Insurance Council of Australia has just declared a catastrophe for tonight’s Sydney hail storm with a large number of claims already lodged,’ it tweeted on Thursday night.

New South Wales isn’t safe from hail yet, with the Bureau of Meteorology predicting more to fall on Friday. 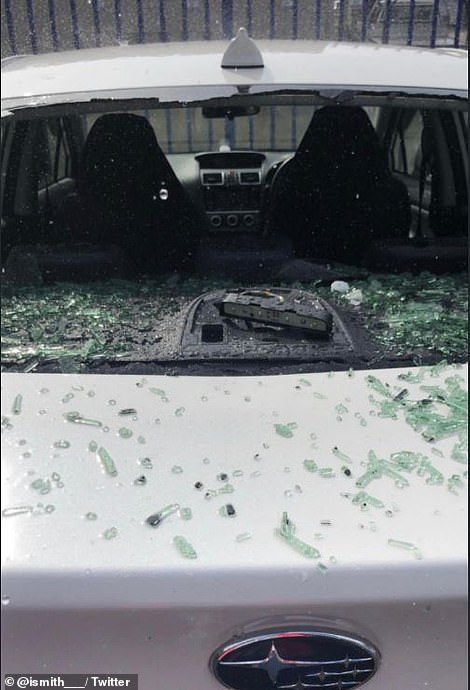 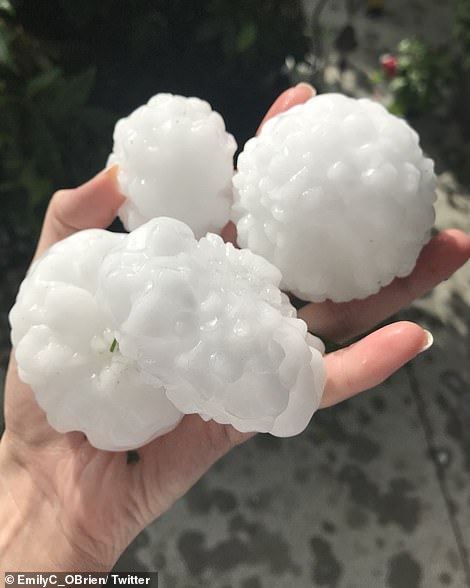 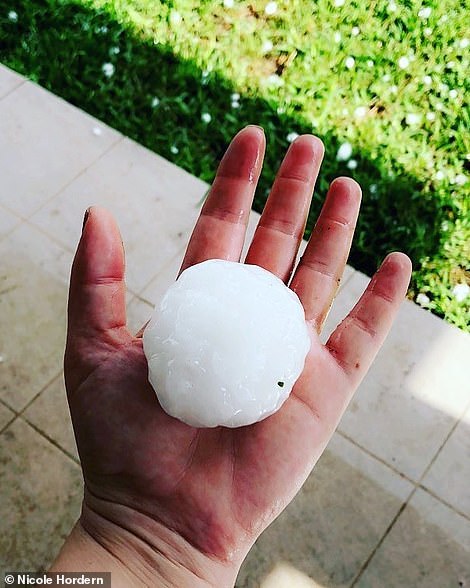 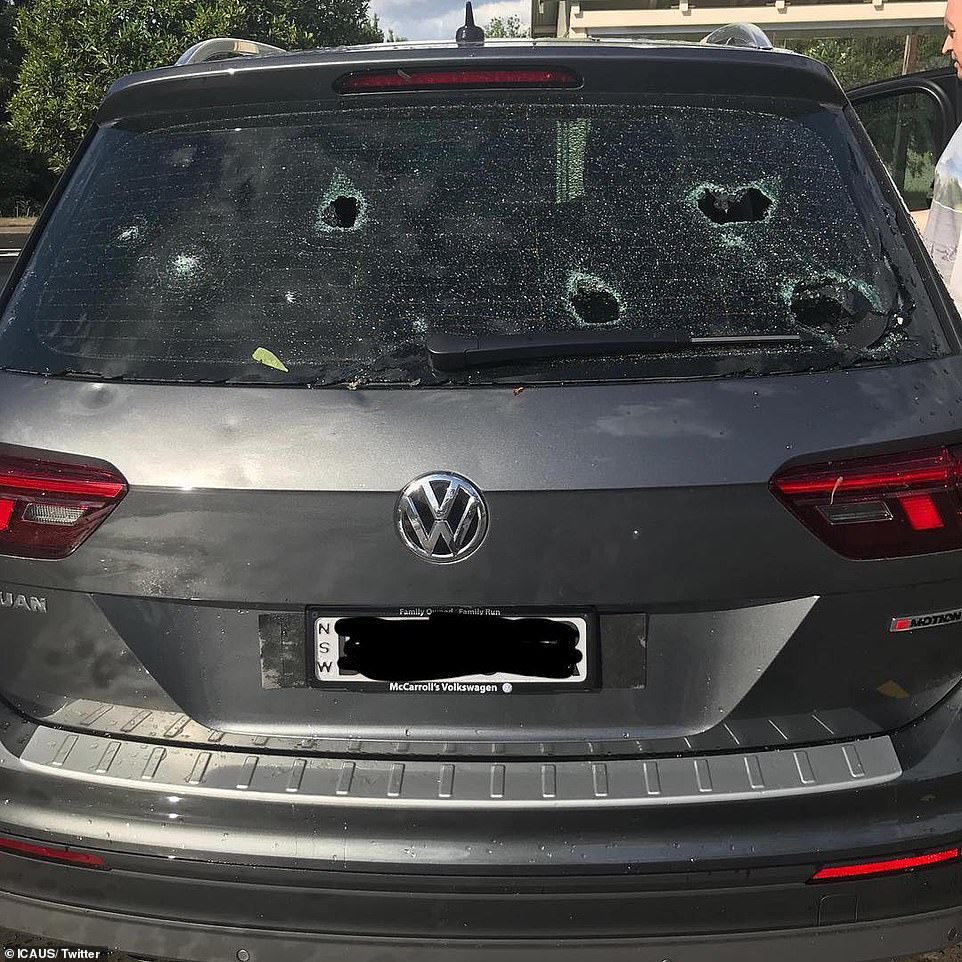 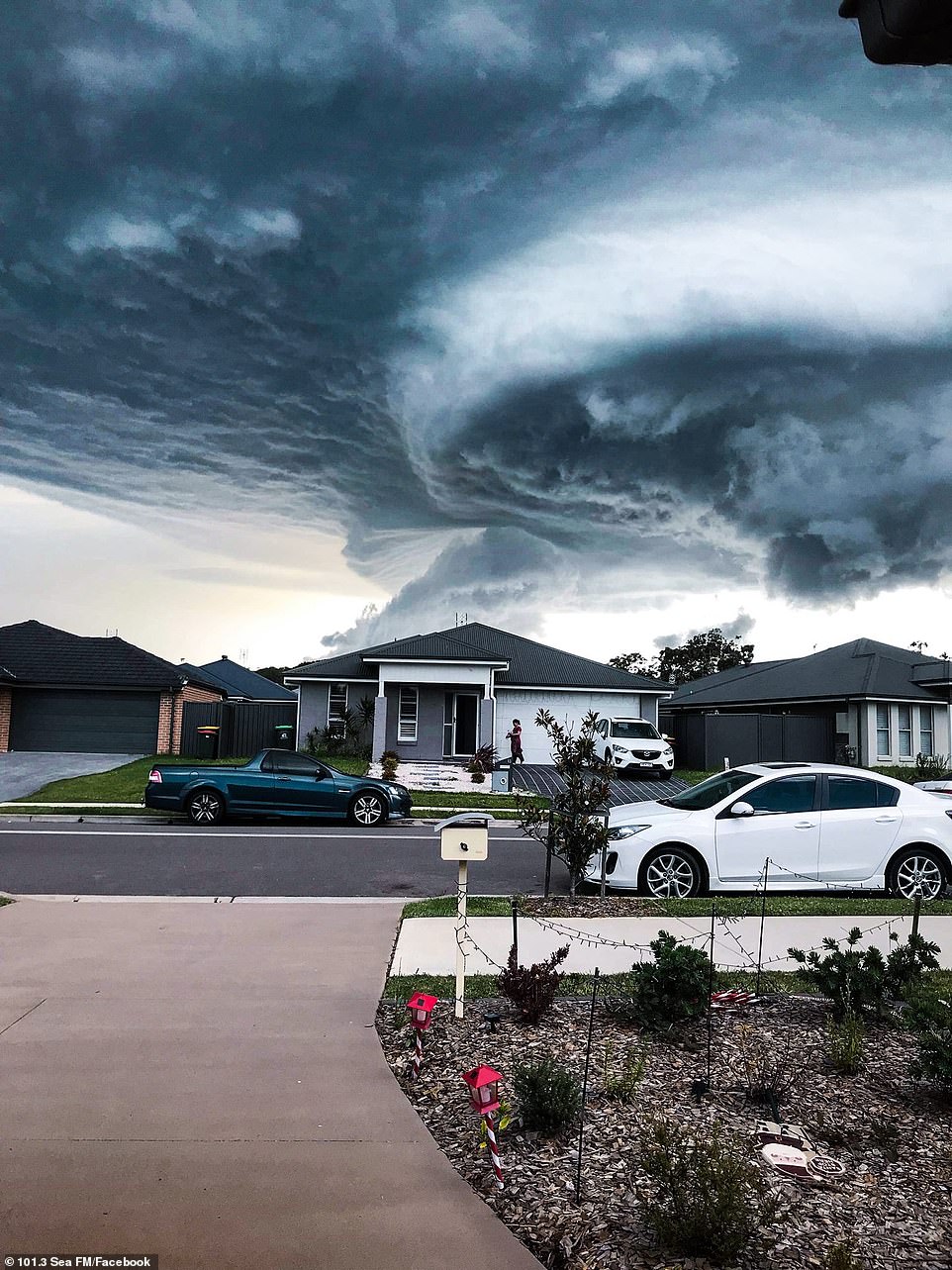 Multiple storm fronts converged on the Hunter Valley, Wollongong and Sydney on Thursday afternoon, prompting a severe weather warning from the Bureau of Meteorology

Multiple storm fronts converged on the Hunter Valley, Wollongong and Sydney on Thursday afternoon, prompting a severe weather warning from the Bureau of Meteorology.

Tens of thousands of homes were left without power and the full scope of the damage is not yet known.

The ICA said on Friday some 15,000 claims worth about $18 million had been lodged as at 6.30pm Thursday and more were expected on Friday.

An insurance catastrophe was declared shortly after 7pm while the wild storm was still causing havoc.

The disaster hotline received more than 300 calls within the first three hours of being activated.

The NSW State Emergency Service responded to over 1400 calls within a three hour period, as well, and received thousands of calls.

The Insurance Council has already set up a task force to work with insurers, the SES, the NSW Government to resolve issues as quickly as possible.

Mr Fuller urged anyone who needs to lodge a claim to contact their insurer but pleaded for patience.

‘Insurers are prioritising claims from the hail storm and are working to resolve them as quickly as possible,’ Mr Fuller told Daily Mail Australia. 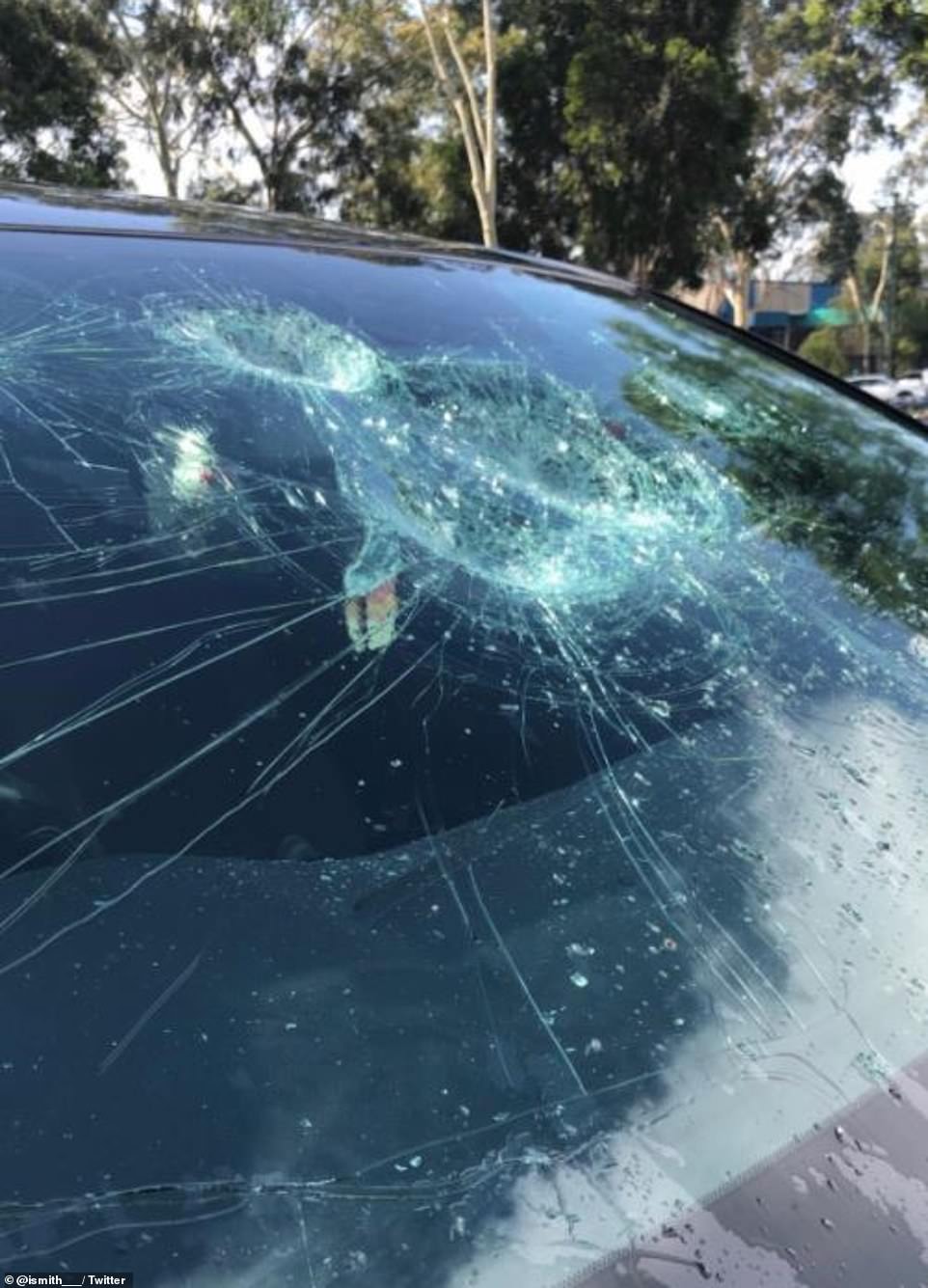 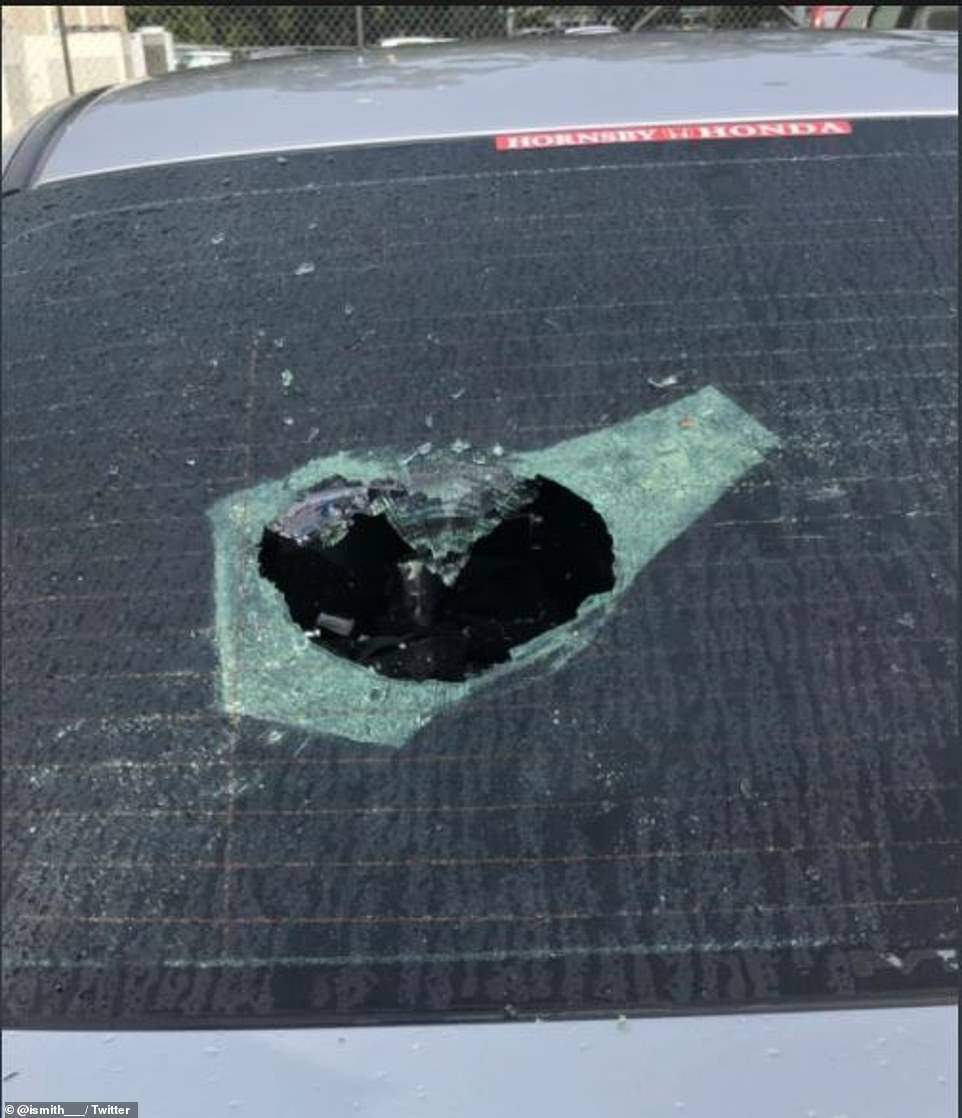 ‘Lived here for over 20 years and I have never seen hail that big,’ one woman tweeted with this pic of a shattered windscreen 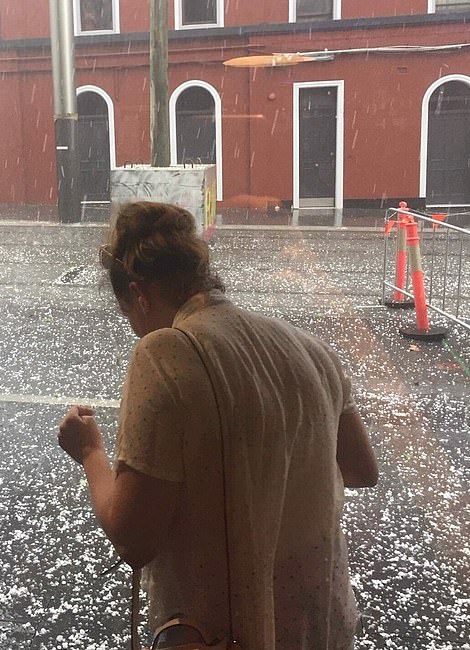 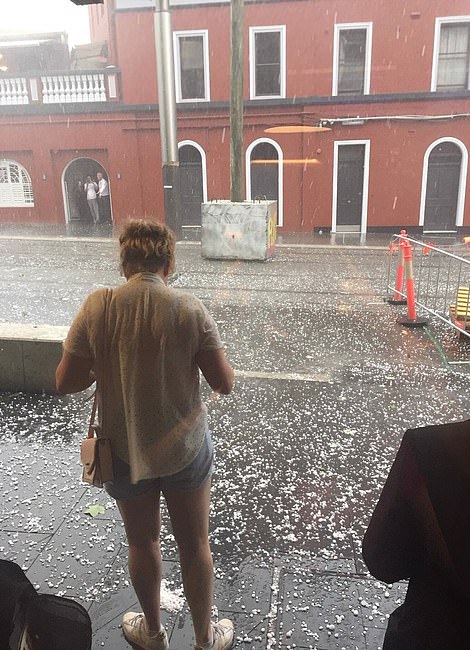 Sydney has been smashed by a freak summer storm with windscreen-shattering hail, torrential rain and devastating winds

Cars and homes sustained significant damage as the city was pelted with tennis ball-sized chunks of hail.

‘Lived here for over 20 years and I have never seen hail that big,’ one woman tweeted, along with several pics of shattered car windscreens.

Another added: ‘Berowra had hail the size of baseballs… solar panels smashed, leaking roofs, windows broken, cars written off- and a missing pet.’

Endeavour Energy reported 20,000 homes and businesses in its network were without power from the Blue Mountains, through Sydney’s west and up to the Hawkesbury.

Around 200 electrical hazards were left in the storm’s wake as powerlines were toppled, the company said in a statement. 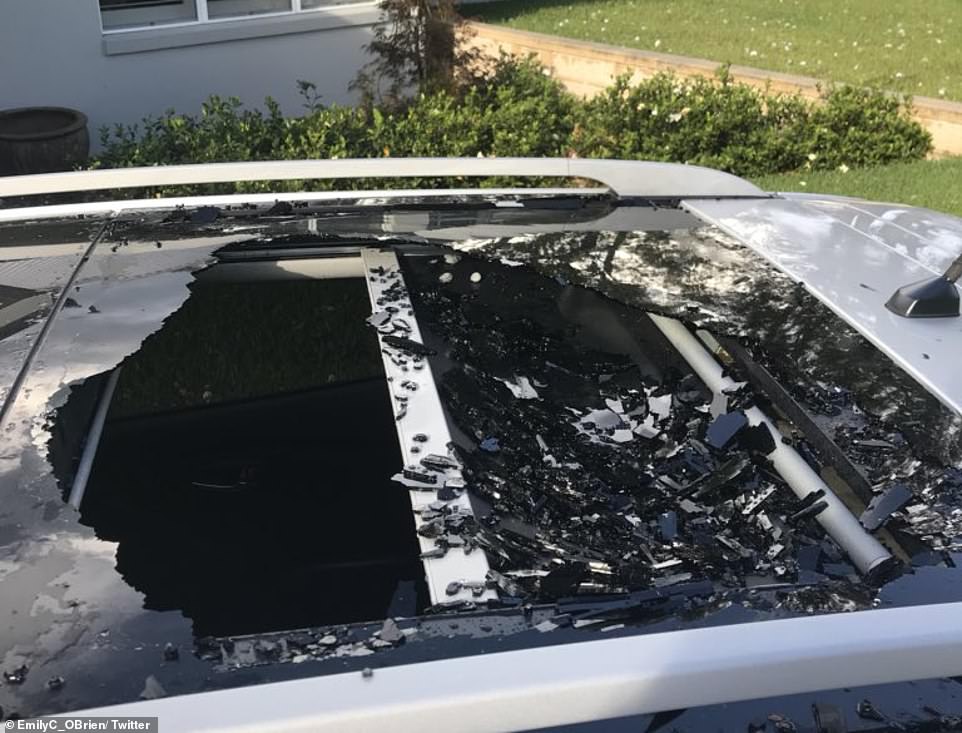 Multiple storm fronts converged and dumped hailstones bigger than human palms on the city’s fringes, destroying cars in their path

‘Town Hall station is a war zone with thousands of people trying to get into the station and thousands more people qandering aimlessly and stopping at random moments in their slow walk,’ one person tweeted.

Sydney Airport was hit with serious disruptions during the peak of the storm, with passengers urged to check with their airlines for delays. 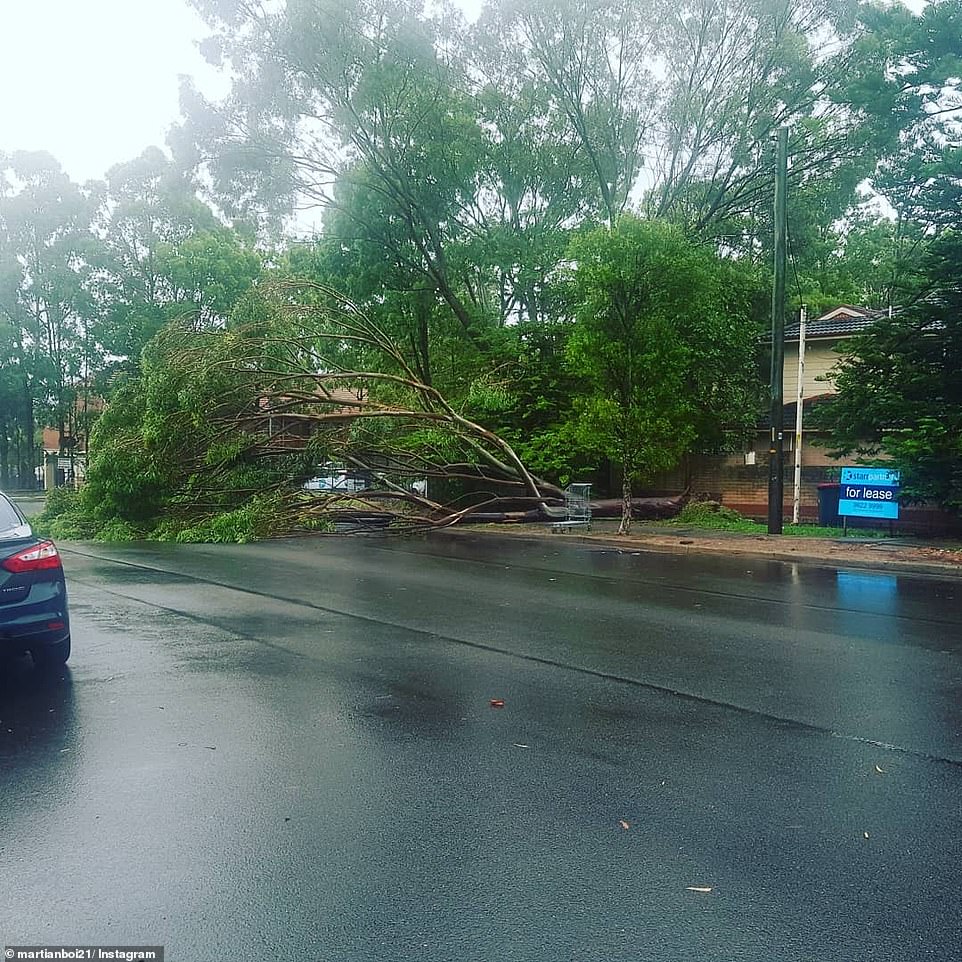 Roads and footpaths in parts of Sydney were blocked by fallen trees, leaving a big clean up jon for the SES 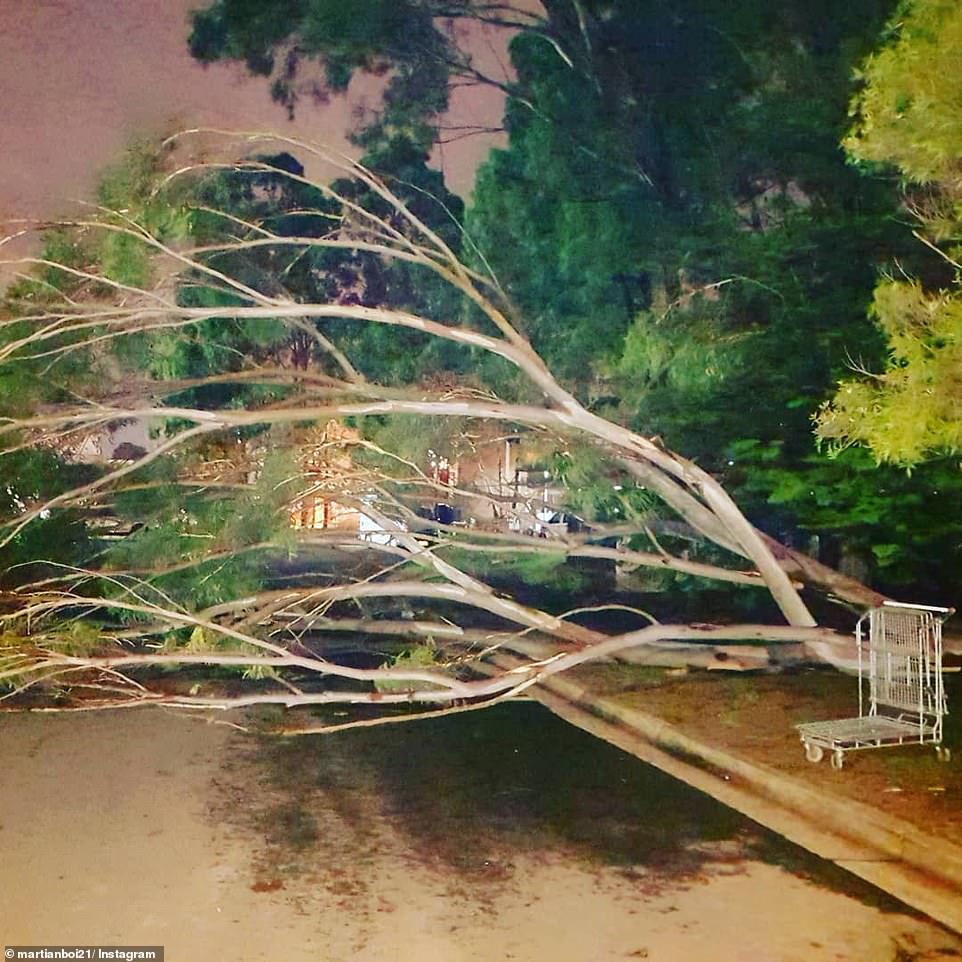 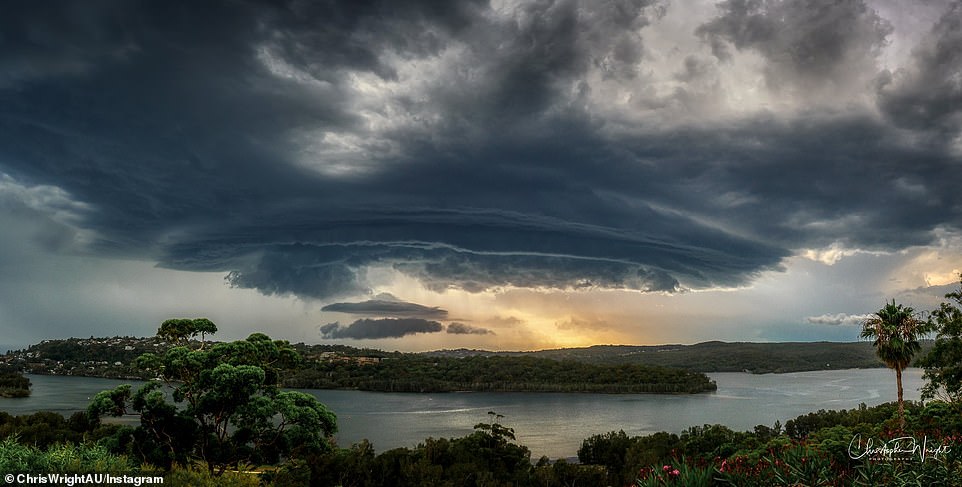 Multiple storm fronts converged on the Hunter Valley, Wollongong and Sydney on Thursday afternoon prompting a severe weather warning from the Bureau of Meteorology.

Social media was awash with photos of hailstones bigger than human palms on the city’s fringes and videos which showed crowds huddled under awnings as city roads were covered by ice.

‘Biggest hail ever,’ one person tweeted, sharing a photo of three enormous chunks of hail.

The State Emergency Service has urged people to move their cars under shelter and stay indoors if possible. 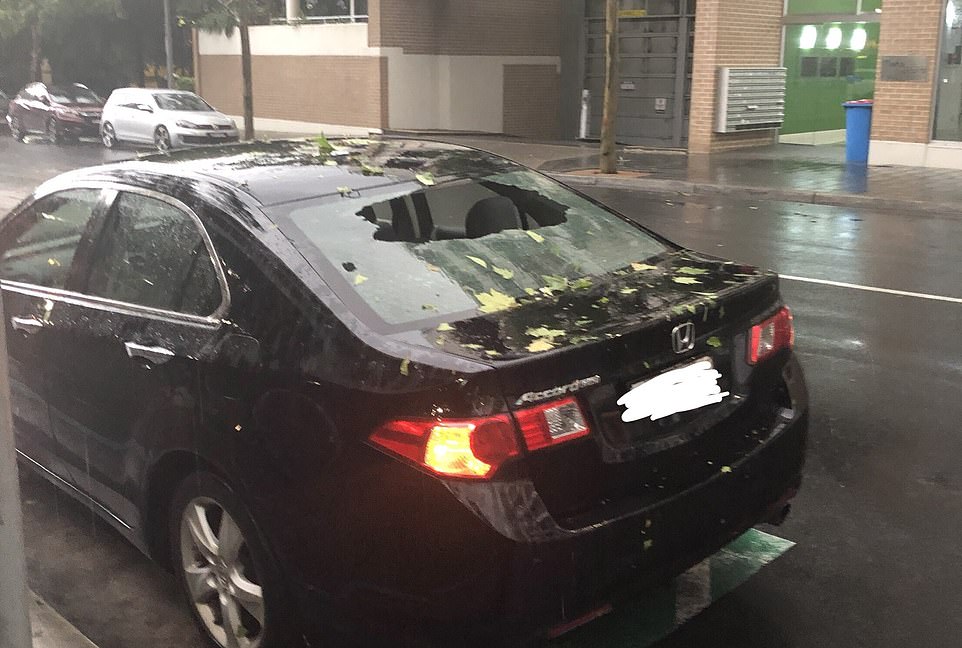 More damage ahead: Ausgrid has reported service outages on their Twitter page. According to their social media there are 2,700 customers without power in Arncliffe, Bexley and Rockdale Sydney bombarded with hail as storm strikes in time for peak hour 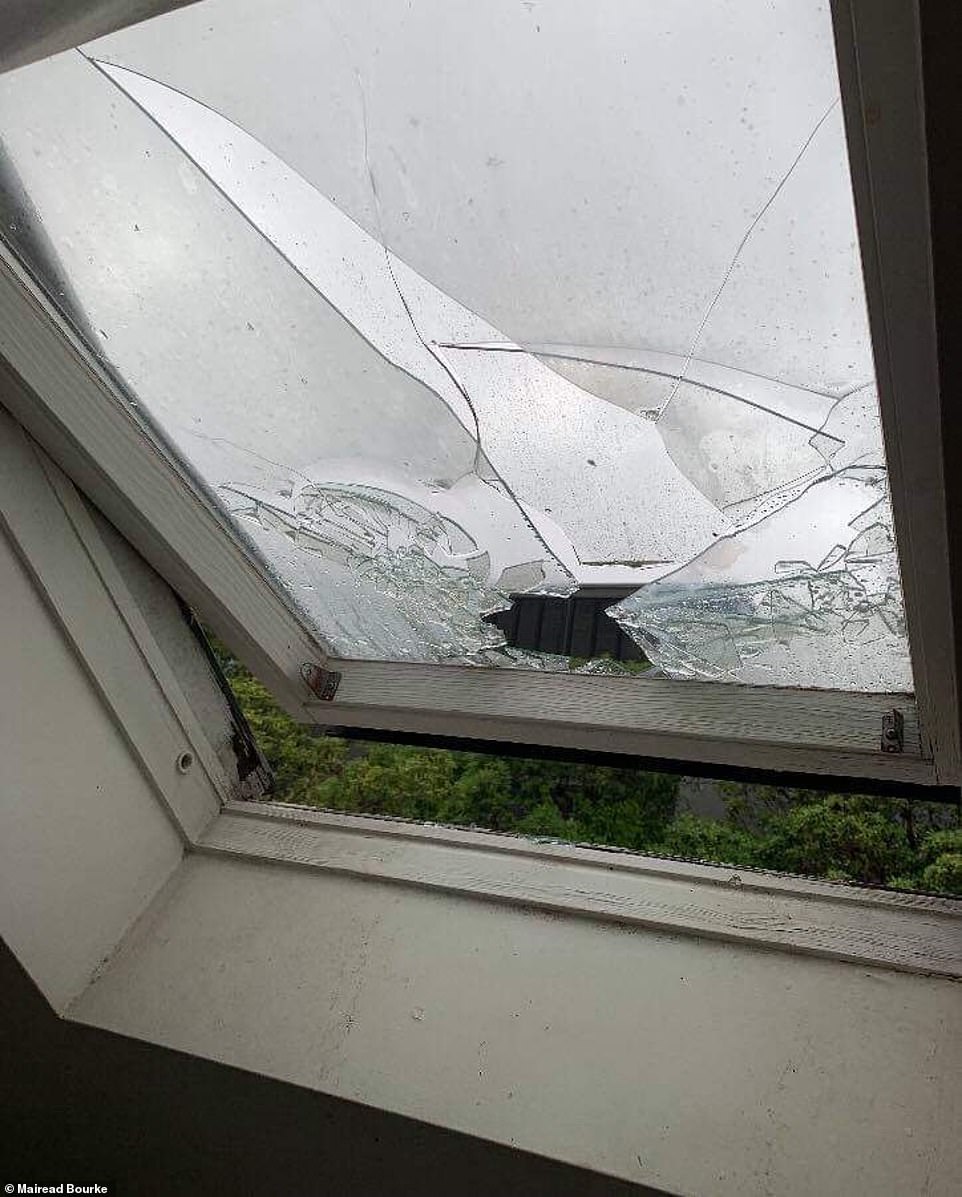 Hundreds of people reported damage to both their home and cars, with the SES advising people to stay inside 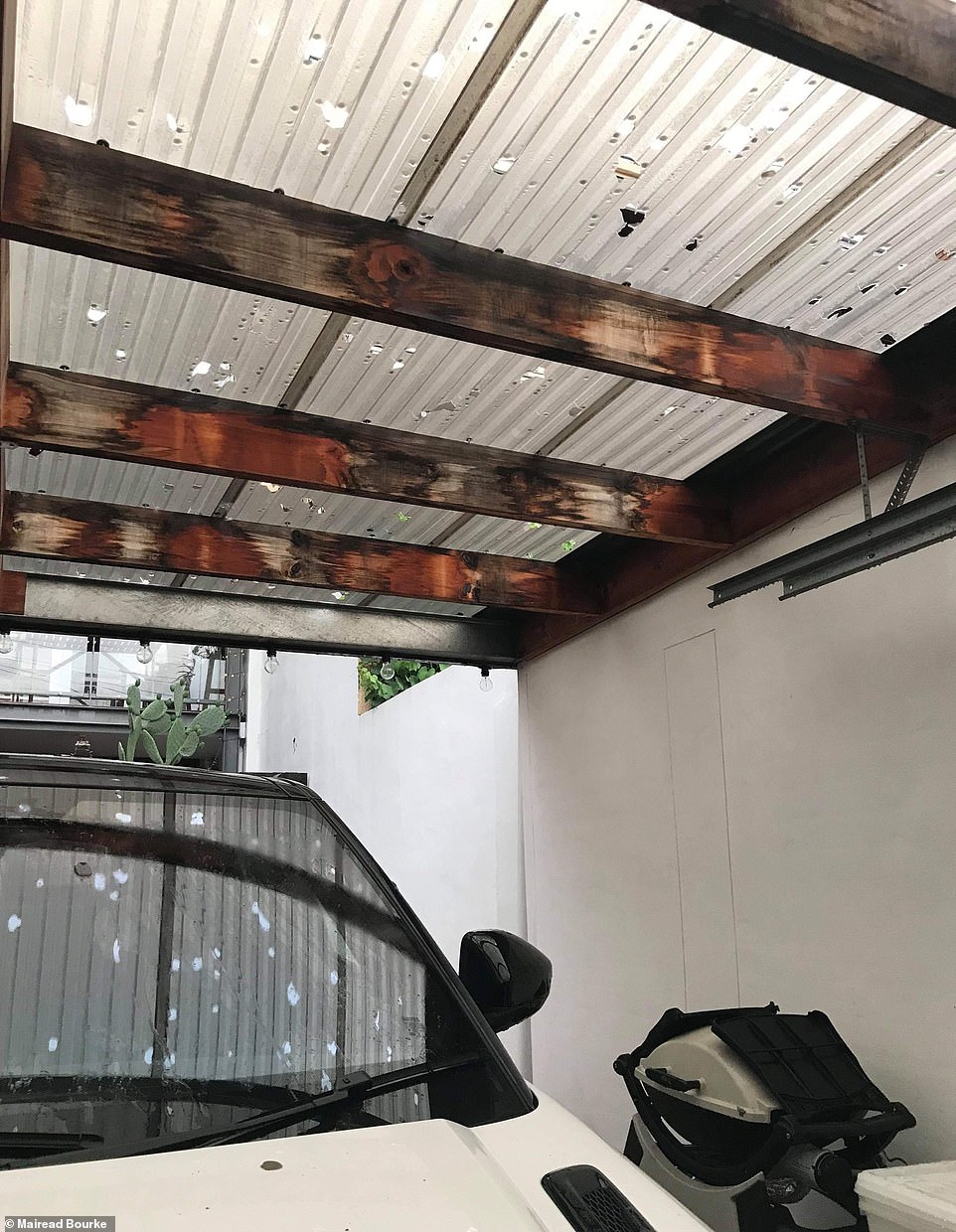 While a Darlinghurst woman was left with her window smashed, her Range Rover dented and her car port with holes in it

Ross Anderson, from Moorebank, near Liverpool, said the storm hit his home around 4.45pm and damaged one of his vehicles.

He told Daily Mail Australia: ‘It sounded like the roof was going to cave in.’

Mr Anderson shared pictures of his car with the rear windshield damaged due to the hail.

The rear window was left with dents and a gaping hole thanks to the massive chunks of ice.

A Darlinghurst woman was left with her window smashed, her Range Rover dented and her car port with holes in it.

There were reports of hail as big as five centremetres in Berowra.

A forecaster from the Bureau of Meteorology confirmed more wild weather is on its way, but isn’t expected to hit Sydney.

The Northern Tablelands and far north-east NSW can expect further thunderstorms on Friday.

‘There is quite a good chance some of those storms will become severe. If that develops as forecast some warnings will be issued across those regions,’ he told Daily Mail Australia.

Sydney-siders may see some rain across the weekend, but it is expected to clear by Monday, paving the way for a dry Christmas. 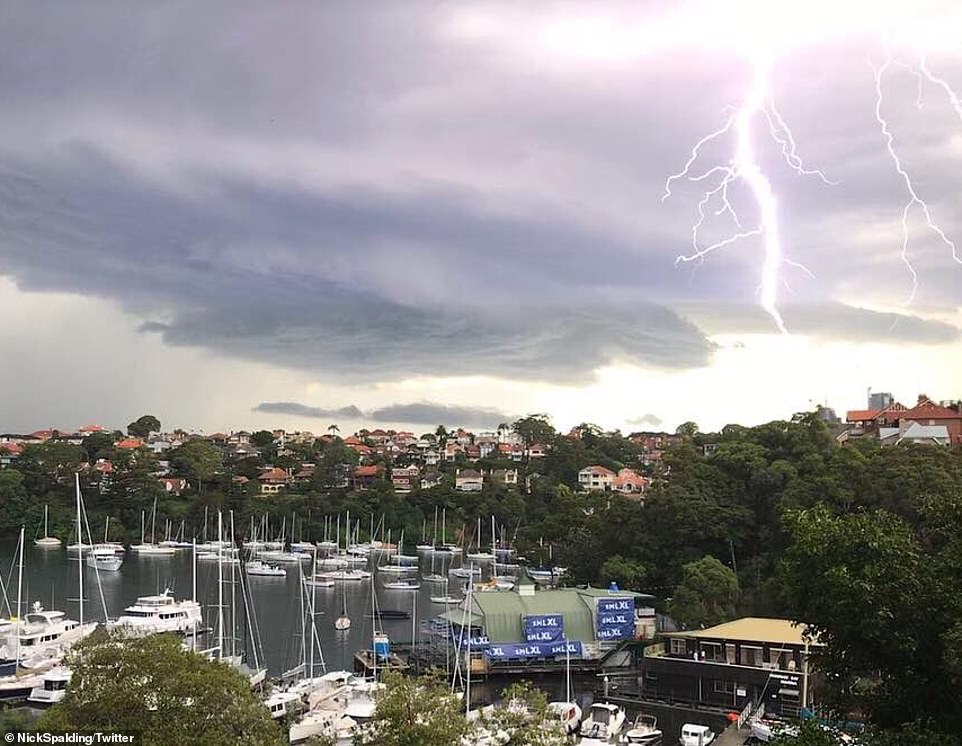 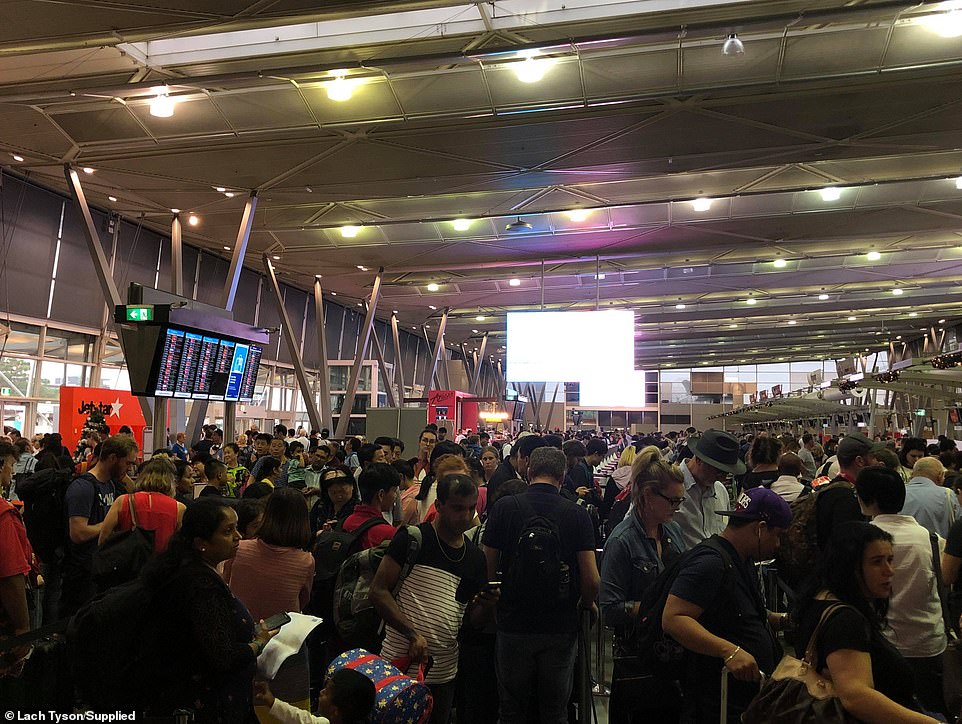 Sydney Airport is facing delays of up to 60 minutes, with various flights cancelled and diverted due to the storm 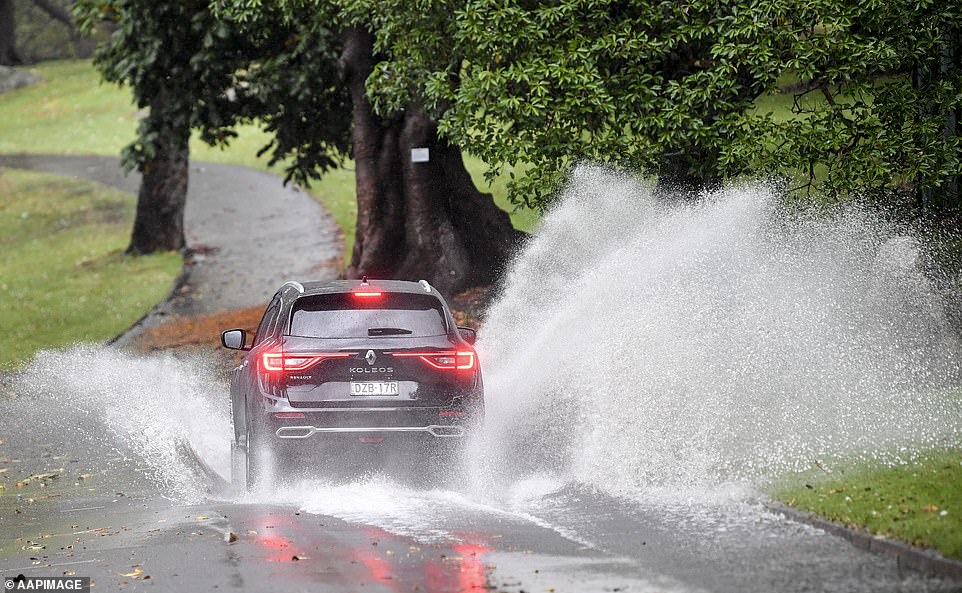