Anne Russ Federman, who started working at her father Joel Russ’ deli at the age of 14 along with her two sisters, passed away from heart failure on Thursday at her home in Pembroke Pines, Florida.

She was the last survivor of the four namesakes behind the Lower East Side Manhattan eatery that her father opened more than a century ago.

Russ & Daughters’ legacy has now been passed to Anne’s grandchildren Niki Russ Federman and Josh Russ Tupper, the fourth generation to own and run the store famous for lox, herring and other Jewish delicacies.

Anne Russ Federman, the last remaining daughter behind the iconic New York deli Russ & Daughters, passed away aged 97 at her Florida home on Thursday. She is pictured (right) with her father, the store’s founder Joel Russ, and her two sisters Hattie (left) and Ida (second right) 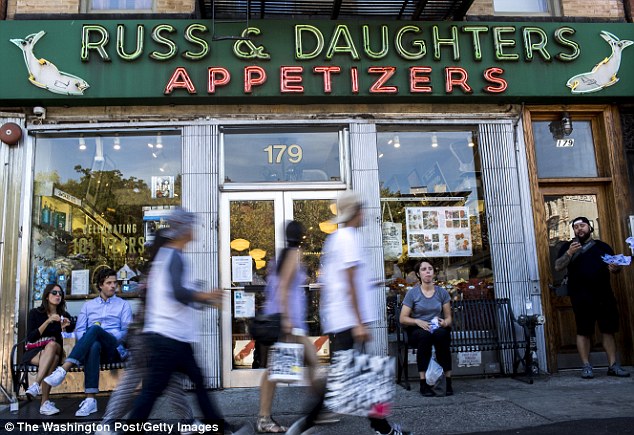 Russ & Daughters was founded in 1914 and moved to the location is still occupies today in 1920, the year before Anne was born. Anne, the youngest of the three daughters, began working in the shop as a teenager and Joel brought the sisters on as partners in 1933 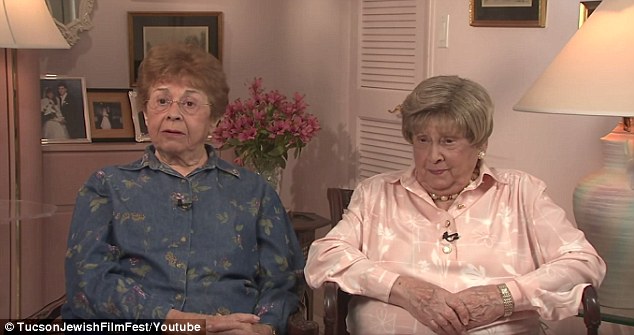 Anne, considered a celebrity in New York’s culinary community, is pictured (right) with her sister Hattie in the 2013 documentary Sturgeon Queens

Anne was born on June 11, 1921, a year after her father’s store moved to its now-permanent location on Houston Street and some six years after it first opened.

She was the youngest of daughter of Joel and Bella Russ, both Jewish immigrants from what is now Poland.

Russ had gotten his start in the food industry in the early 1900s when he began peddling mushrooms and herring from a street cart in Manhattan before opening a storefront under the name Russ’s Cut Rate Appetizers in 1914.

Anne was barely a teenager when Joel enlisted her and her older sisters Ida and Hattie as his partners in the business, seeing as he had no sons.

An obituary in the New York Times describes how working in the store on the weekends meant Anne’s teenage social life suffered – in part because she usually smelled of fish.

However, the store ultimately provided Anne with something far more important than a social life: her husband.

According to the obituary, Anne was working behind the counter one day when a regular customer came in and asked which of the three daughters was not yet married, offering up her son, whom she called: ‘the sheikh of Brooklyn’.

Anne agreed to meet the woman’s son, Herbert Federman, and they got married after she graduated from high school in 1940. 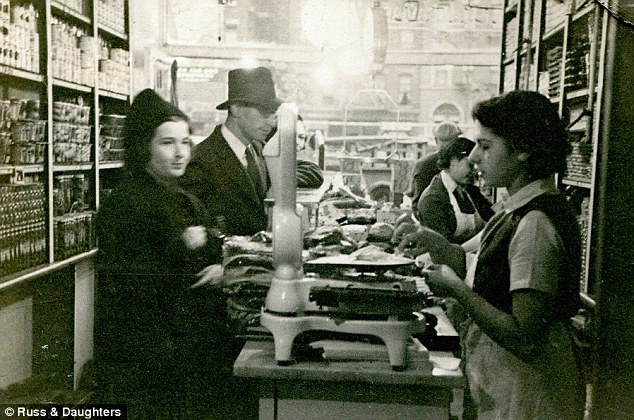 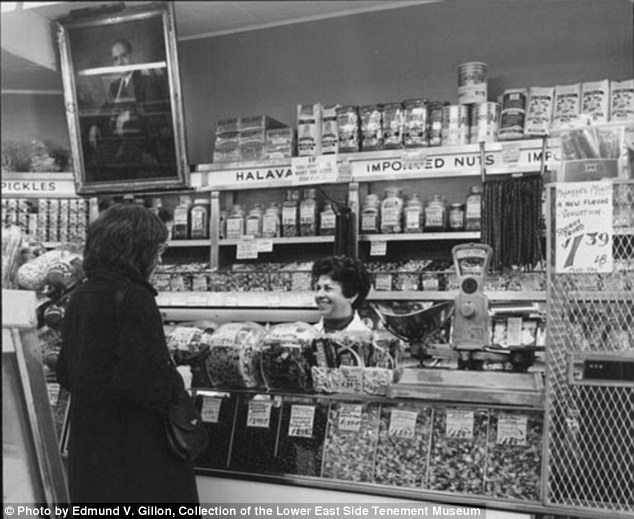 All three daughters inherited their father’s strong work ethic, but avoided what has been described as his lack of interpersonal skills.

‘My father had no patience,’ Anne told the Times in 2000. ‘If a customer said a word to him that wasn’t right, he would chase her out of the store.’

The 2013 book Russ & Daughters: The House That Herring Built, written by Anne’s son Mark Federman, says the sisters were warm and caring to all customers who came into the store, almost to an unusual degree. 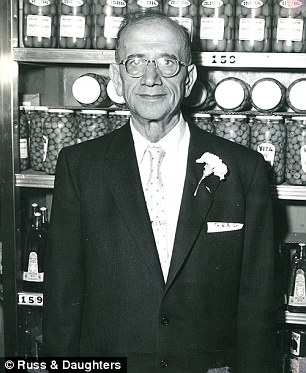 Joel Russ, a Jewish immigrant from what is now Poland, got his start in the food industry selling appetizers out of a street cart. He opened a storefront in 1914

Calvin Trillin wrote in the book’s foreword: ‘At Russ & Daughters a particularly adorable two-year-old didn’t get the quick smile and cursory “Isn’t she dear” that you might hear from, say, the proprietor of an English tearoom.

‘The daughters of Joel Russ, The Founder, were running the place then, along with their husbands, and they were people who had fully absorbed the profound teaching of Willy Loman’s wife: “Attention must be paid.”‘

He continued: ‘Am I just imagining it, or did one of them, while emerging from behind the counter to get within cheek-pinching range of one of my daughters, sometimes say to her colleagues: “How can you stand there and slice fish with a face like that in the store?”‘

Joel passed away in 1961, and soon years later Anne and her sisters retired to Florida.

Anne herself is survived by her son, Mark, who retired from the store in 2009, and two daughters, Tara Federman and Hope Gottlieb, as well as by seven grandchildren and nine great-grandchildren. 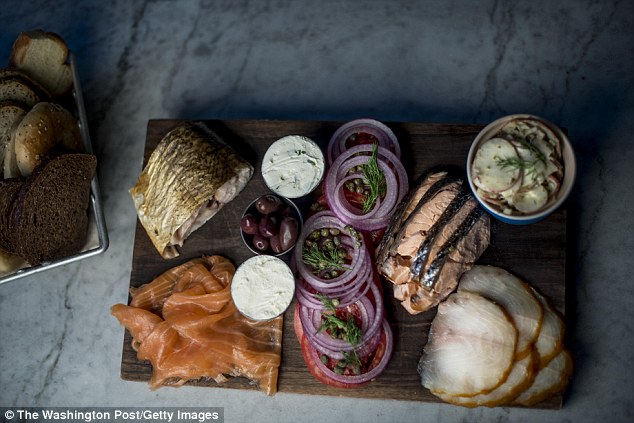 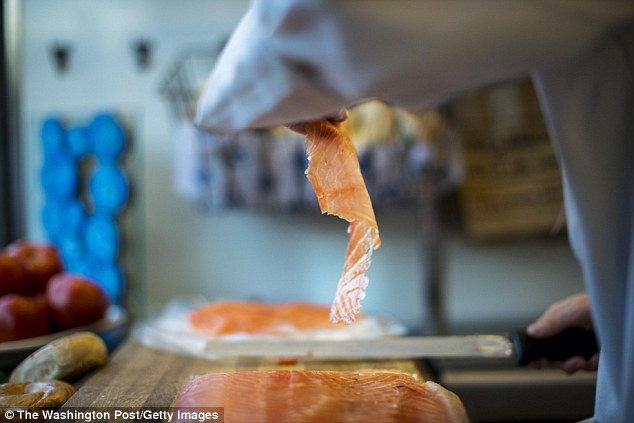 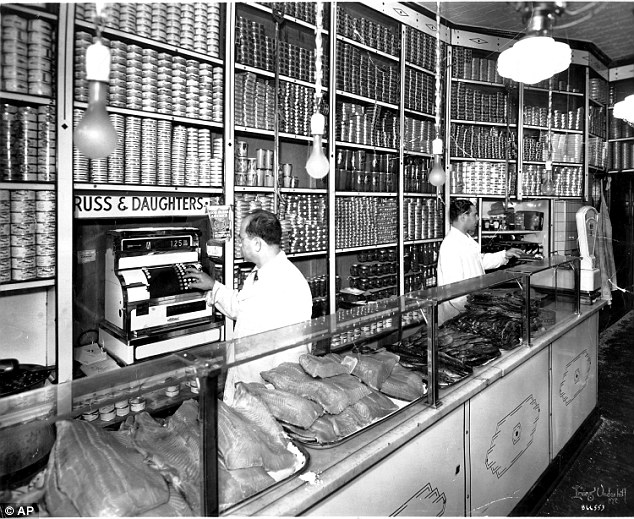 This undated image the Russ & Daughters counter several decades ago